Saddam al Jumaily was born in 1974, on the outskirts of Basra. He graduated from the College of Fine Arts, Basra University in 2000, after which he stayed on as a lecturer.  He was arts editor of Iraq’s Manara magazine, and has worked as a graphic designer. Today, he lives in Jordan and has had solo and group shows throughout the Middle East, including Dubai and Amman. He is represented by Art Sawa gallery, Dubai. An audio extract of the interview is included in Arabic.

What made you become a painter?

My brother was a painter and calligrapher, and he influenced me greatly. My father was a caretaker in the village school, and on evenings I would go with him to lock up the classrooms. There, I saw all the drawings and artworks on the walls, I remember being struck by the drawings of birds on the blackboard.  The first artwork I ever admired was a painting in a barber shop. It portrays a small, muddy room – I remember it vividly. I grew up in Southern Iraq, in a village near Basra. I initially enrolled at the College of Agricultural Engineering in Basra – but after the foundation years, I switched course to study the painting.

What are the surreal, figurative elements in your paintings?

They express the strangeness I find in this world, particularly in Iraq. It is a country that I do not always understand. In my paintings the shapes are harsh and fragmented, animals become part human. These strange animals could be fear, death, disease, hunger or loss. Life in Iraq is like these strange animals.

‘They express the strangeness I find in this world, particularly in Iraq.’ 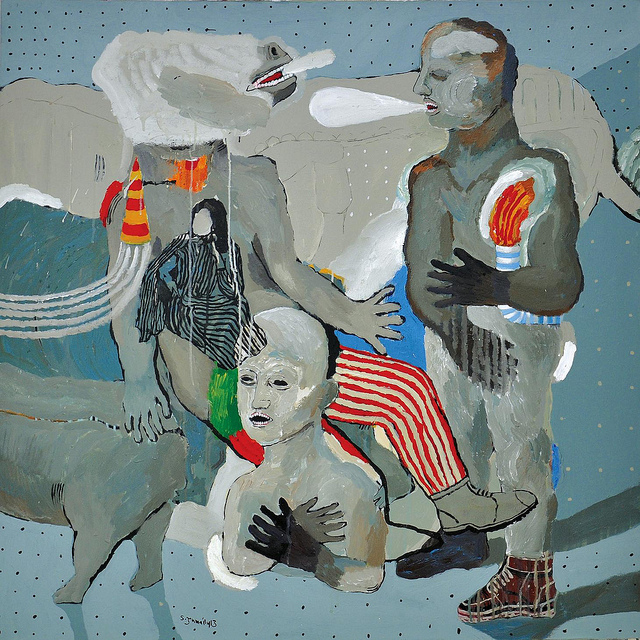 A few of the first images by Tamara Chalabi, 2010

How have your experiences of Iraq and Basra influenced your work?

My experience of the city may not be immediately obvious in my work, but it certainly is there. My art often expresses my demolished city and home.  Our village in Basra was next to an oil refinery, and weapon storage facilities. These were key targets during the Iran-Iraq war, which began when I was 6 and lasted through to my teenage years, as was the Basra International Airport. As a child, and later a student, as the military convoys drove through Basra, I experienced suffering, fear and panic on a daily basis. Today, Basra is a wonderful city, it is lively and smart. It is full of different cultures and loves to live.

What is the role of the artist, in your opinion?

Creativity is the search for originality, and the desire to be unique. An artist must be able to express the problems of his life, and the society around him. 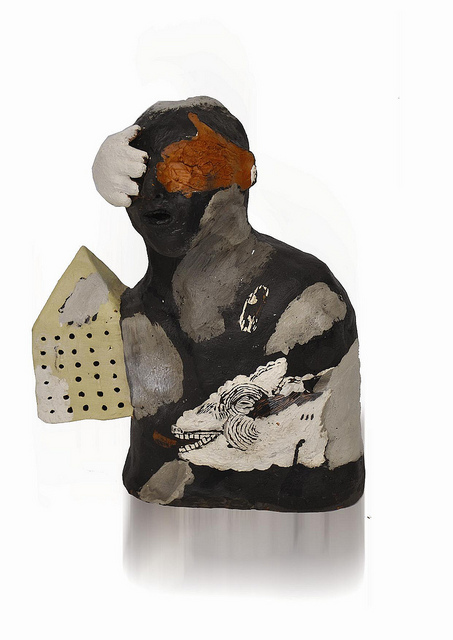 Image courtesy of the artist

‘An artist must be able to express the problems of his life, and the society around him.’

What was the art scene like in Basra, when you were a student there?

The blockade  made it difficult for art students. I would paint on old bits of discarded paper and rubbish. Our paints, and colors were hand made. Despite this, many great artists hail from Basra, like the sculptor and painter Ismael Fattah al-Turk, and Mohamed Muhraldin.

What place or person in Basra would you most like to paint?

In the past, I used to paint the rivers and streams with palm trees – the ones typical in Southern Iraq. But now our lives have changed, the landscape has changed, and I want to portray it as it is.

What is the role of the painter in your opinion?

Work hard, try everything, and keep an open mind. Painting is not about adorning your house with beautiful objects, like literature, it is something we need to make our lives better.

What painters do you most admire? Why?

I admire many artists, and don’t want to limit my influences. I particularly like Picasso and David Hockney, and the mood of their paintings.

What is your favorite colour? Why?

I don’t think an artist should have a favorite colour.

What does Iraq mean to you?

It is like a harsh mother. But I love it.