In ‘Fatherland,’ the Iraq Pavilion exhibition at the Venice Biennale, the artist Serwan Baran explores the nature of war, patriarchy and militarism, based on his own experiences as a soldier in the Iraqi army in the1990s. Yet decades of ongoing war, Baran says, has also impacted Iraq’s nature and ecology.

“Baghdad was once a green city,” recalls Baran, “Today most of its palm trees and green spaces are gone. In Basra, Saddam chopped hundreds of thousands of trees to get a better view of the Iranians on the other side during the Iran Iraq war.”

This month, in parallel to the Iraq Pavilion, we look at war’s impact on nature through the work of two artists. First, filmmaker Abbas Abdulrazzaq, documented the assault on Kurdish villages by the Iraqi Army during the Anfal campaign in the late 1980s. Second, Japanese photographer Kikuji Kawada explored landscapes devastated by the nuclear bombing of Hiroshima in WWII.

Both artists revealed the ecological impact of war on nature. Yet their images also became landscapes for memory, trauma and mourning.

Such artistic responses to war shed light on ecological issues, while also revealing deeper human connections to nature and landscapes.

**
In 1988 the filmmaker Abbas Abdulrazzaq travelled to Kurdish villages hidden in the mountains on the Iraqi border with Iran. The villages of Sargalo, Xoshnawaty and Sharbazher, pictured here, had been destroyed days before by air raids and poison gas attacks by the Iraqi army. 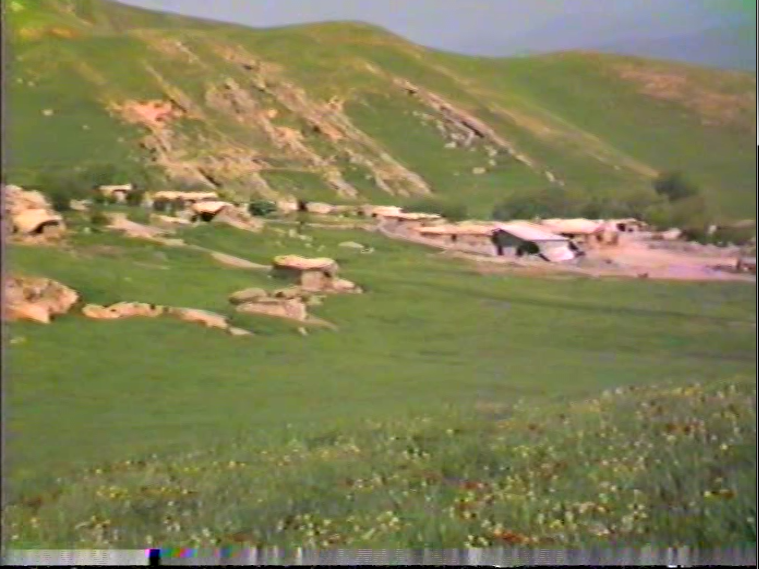 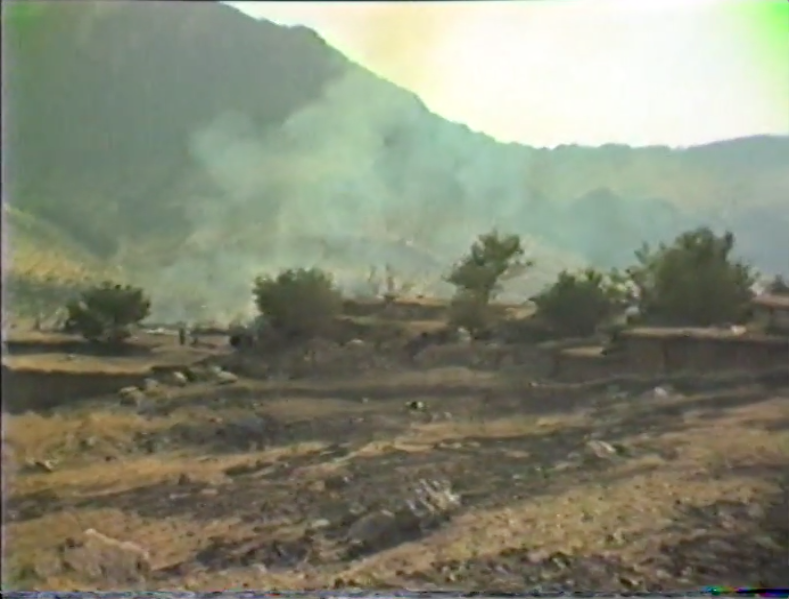 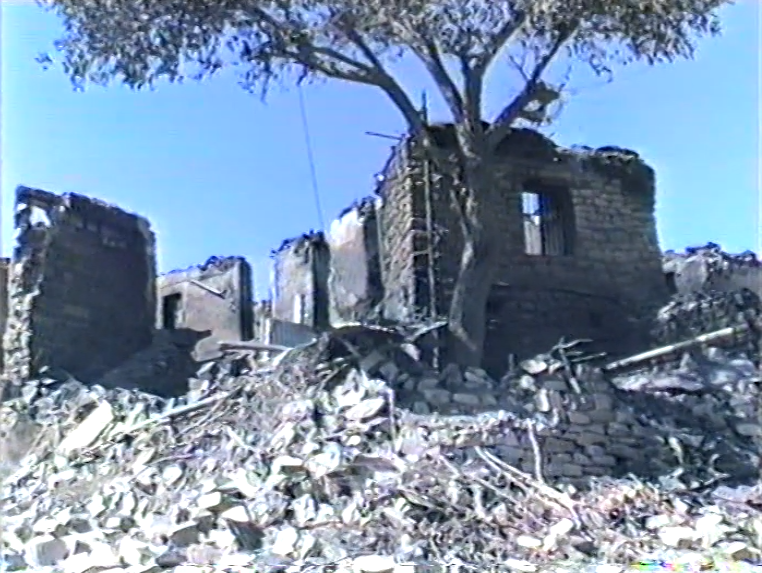 Abdulrazzaq joined the Kurdish rebellion against Saddam in the 1980s as a filmmaker. He documented the Iraqi Army’s systematic assault on Kurdish cities and villages, in what became known as the Anfal campaign, whose aim was to obliterate the Kurdish life and culture that had existed for centuries in the mountains of northern Iraq. According to Human Rights Watch, over 100,000 civilians were killed and 4,000 villages destroyed (amounting to 90% of the villages in the targeted areas).

Abdulrazzaq showed the stillness of the abandoned villages, where birds perched on roof-less homes and neglected farming equipment. The embers of a recent fire were visible in the soil and in the roots of burnt trees. In another clip, women and children stepped out from underground shelters, which they built to protect themselves from air raids. Their mud and stone houses were destroyed from the shelling, and they collectively gathered water to put out the remaining fire. Smoke appeared beyond the hills, where another raid took place. 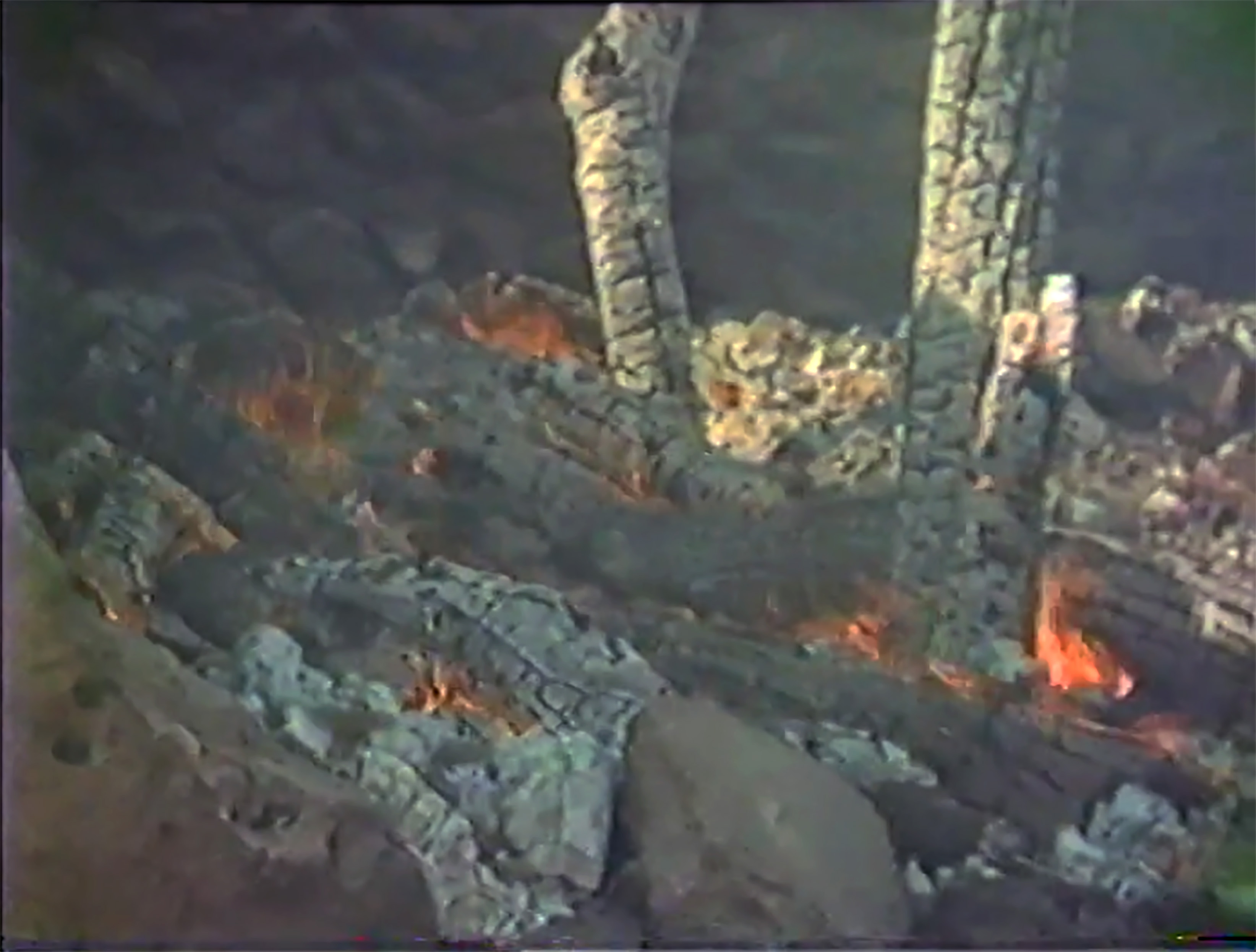 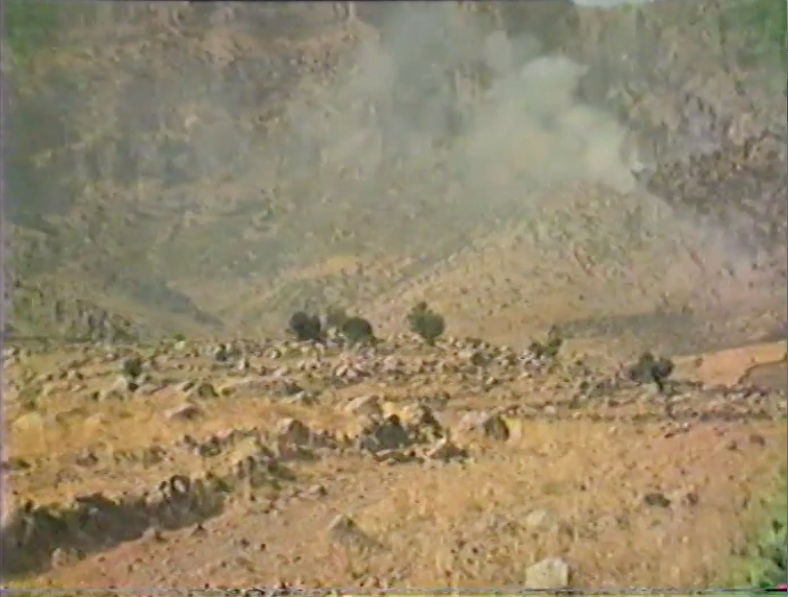 Though destroyed, these villages evoked pastoral scenes, through which Abdulrazzaq revealed rural communities that were deeply connected to the surrounding mountains and wildlife. This served to emphasise what was widely described as the “genocidal” nature of the Anfal campaign, which not only targeted civilians, but aimed to destroy an entire people and their way of life. 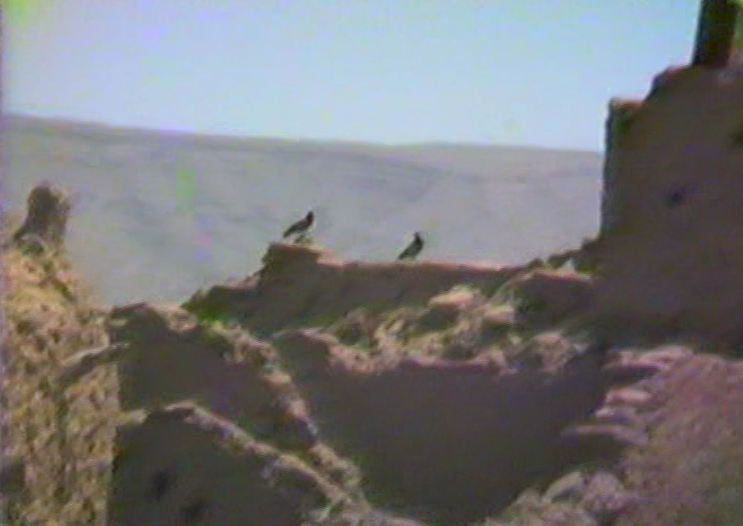 Abdulrazzaq Abdulrazzaq amassed thousands of hours of footage documenting the Anfal campaign. In 2010, his footage and eyewitness account of the chemical attack in 1988 on the city of Halabja was used as a testimonial in the prosecution of Ali Hassan Majeed, the Iraqi Army General who had ordered the attack.

Abdulrazzaq’s archive in Sulaymaniya is currently being digitised by his family. His images are published here by Ruya for the first time with the artist’s permission.

The haunting silence in Abdulrazzaq’s village scenes recalls Japanese photographer Kikuji Kawada’s project The Map, a foldout photobook exploring trauma and regeneration in post-war Japan. The two atomic bombs dropped by the United States on the Japanese cities of Hiroshima and Nagasaki in 1945 caused long-lasting devastation. Up 220,000 people were killed in the blasts, and for months many continued to die from the radiation sickness and other injuries.

In the decades that followed, Japanese culture evolved dramatically as the country recovered its economy and addressed its recent trauma. The Map attempts to capture these changes by documenting the ruins from WWII, the impact of the atomic bomb, and the ongoing American cultural and military presence. 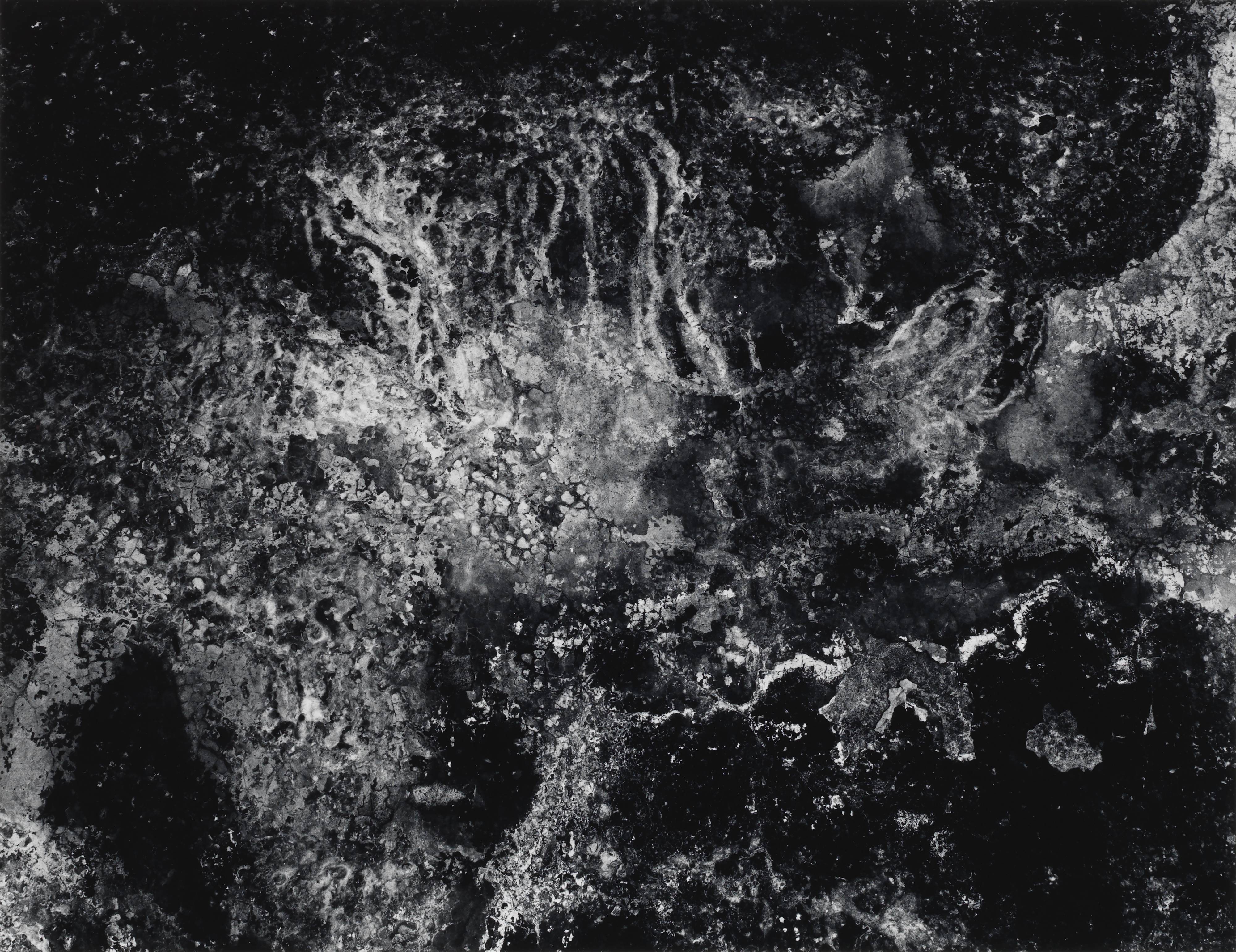 Kikuji Kawada, The A-Bomb Memorial Dome, Ceiling, Stain and Flaking-Off, from the series The Map, 1960-1965.

In Hiroshima, Kawada visited an abandoned administrative building that came to be known as the Atomic Bomb Dome, tracing the black “stain” on the ceiling that emerged after the attack. He also documented the re-growth of the surrounding nature, which mutated from the radiation. In one image, for example, amid the desolate concrete buildings, light poured onto a patch of fresh grass, which, after the bombing, began to grow at a much faster speed. 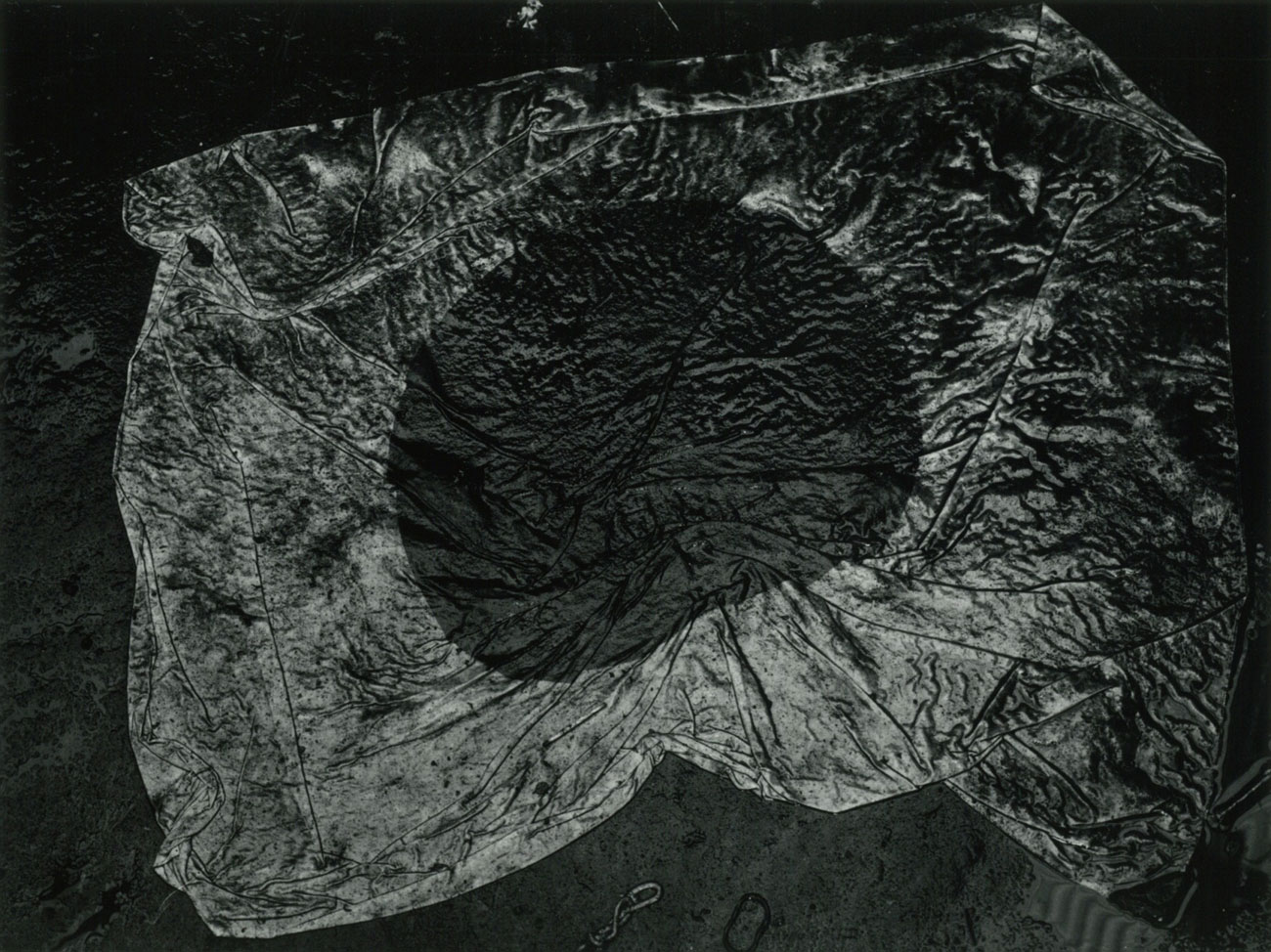 Hinomaru, Japanese National Flag from the series The Map
1965. 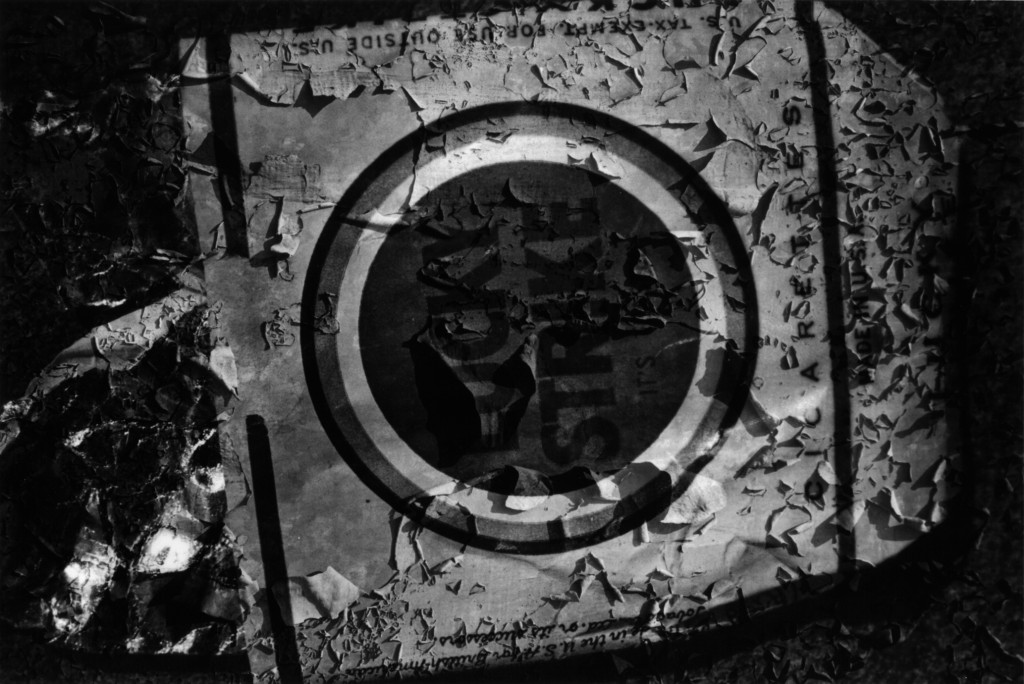 Kawada also explores recovery in Japan’s urban environment. American support led to an unprecedented economic boom in Japan in the post-war decades. Meanwhile, American troops remained station in Japan during this recovery period. The Map reflects both revival and imperialism in a series of images of advertising and street objects taken in Tokyo, which includes the photo of Lucky Strike cigarettes, and discarded Coca-Cola bottles.

These images of static objects devoid of people recall the stillness and silence of cities decimated by the atomic bomb. The Map highlights distortions of Hiroshima’s ecology, and the lasting impact of war on the local landscape. Nature serves as a trope for continued life but within the depths trauma.

Nature is often characterised by its overwhelming size in relation to man, and impassiveness to human suffering. By showing war’s impact on nature, both Abdulrazzaq and Kawada revealed different landscapes of mourning and memory. 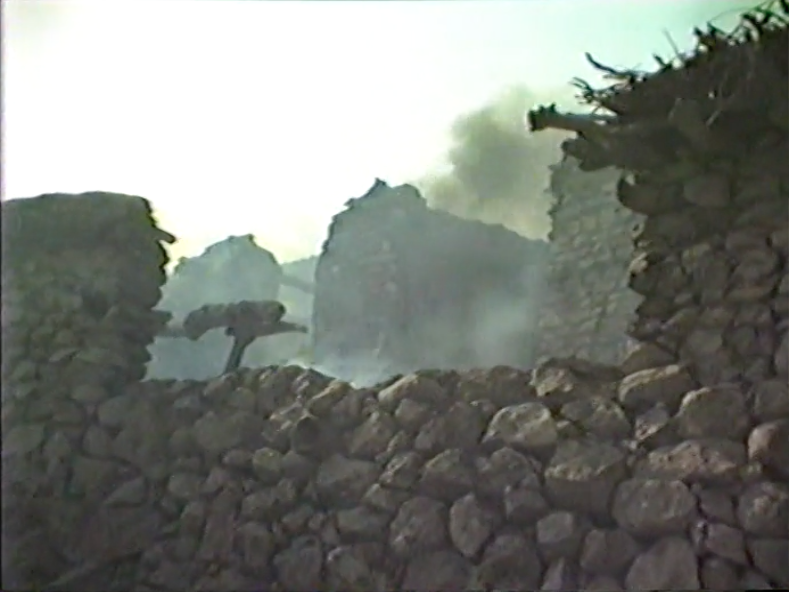 Abdulrazzaq’s images of abandoned hamlets and villages were overwhelmed by the vast stillness of the surrounding nature. The mountains where Kurds sought refuge was impassive to their plight. The filmmaker’s lens appeared as the scene’s sole witness to military campaigns which were aimed at obliterating an entire people, their culture and history. The images served both as testimonial and an attempt to preserve traces of what might be forgotten.

Meanwhile, Kawada’s images revealed the atomic bomb’s total devastation, so that the destruction is no longer visible, but an inherent part of the landscape as it mutated and regenerated. It is nature itself that was overwhelmed by the creeping stain of the man-made bomb.

Finally, the devastation of Iraq’s natural surroundings persists to this day because of internal and external forces. Dams built by neighbouring countries at the sources of the historic Tigris and Euprates rivers have reduced the levels of fresh water flowing into Iraq, while adopting ecological friendly policies or raising awareness has not been a priority for any recent Iraqi government.