In a recent interview, the Iraqi-Kurdish Serwan Baran said of his new exhibition for the Iraq Pavilion at the 58th Venice Biennale: “I want viewers to be witnesses to the crime, to understand what it means to have lived a lifetime of conflict.” The artist’s new commission for the exhibition The Last Meal (2019) depicts a bird’s-eye view of soldiers killed during their last meal. The work condemns Iraq’s perpetual wars, which began with the Kurdish rebellions when he was a child, and continued with the Iran-Iraq war, the Gulf wars and the ongoing sectarian violence. In contrast to the fast diffusion of war imagery in the media, Baran wants to express the longevity of the conflict, as well as its atrocity.

Baran’s understanding of the witness seems clear on the outset. A witness is by definition the person who observes an event taking place. Their role is implied by the act of seeing. Witnesses can provide crucial evidence to a crime, but they can also cast doubt with unreliable testimonials and sometimes silence. The fact that Baran fought as a soldier in the wars that he witnessed and depicts complicates this notion: he too is guilty of the crime. And what role do the viewers then assume, as witnesses to his paintings? 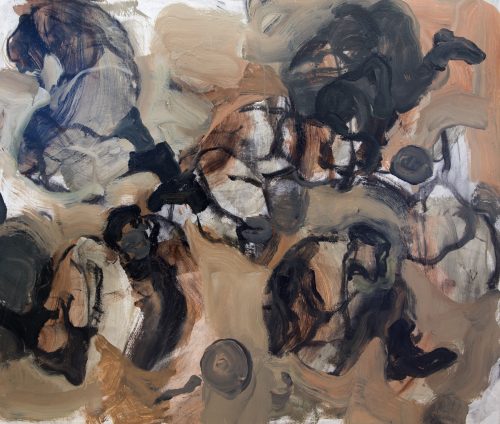 Serwan Baran, study for The Last Meal (2018). Courtesy of the artist.

These fraught implications about the nature of seeing, and the responsibilities of the onlooker are present in accounts of modern and contemporary warfare. They appear in the Spanish painter Francisco Goya’s series The Disasters of War (1810 – 1820), a chronicle denouncing the Napoleonic invasions of Spain and their aftermath, and also in Otto Dix’s well known portfolio of etchings, Der Krieg (1924), which depict the German artist’s personal account as a soldier in World War I. Goya, Dix and Baran’s eyewitness accounts denounce war’s atrocities, thus subverting the traditional genres of war and history paintings, which depict victories and military prowess. 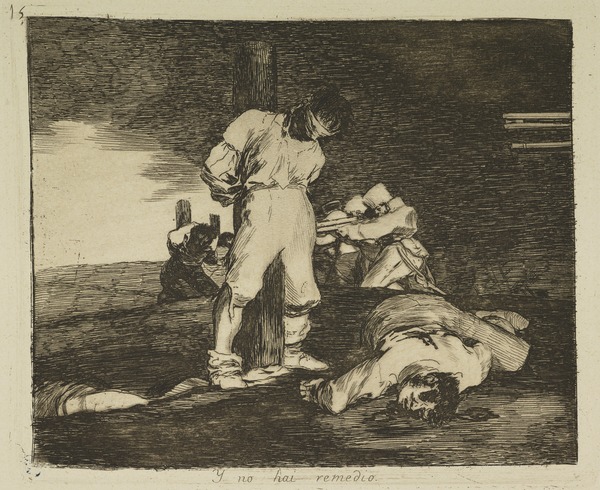 Tampoco (Not [in this case] either), Plate 36 of Los Desastres de La Guerra (The Disasters of War), (Harris No. 156 III). Out of Copyright, National Galleries of Scotland. 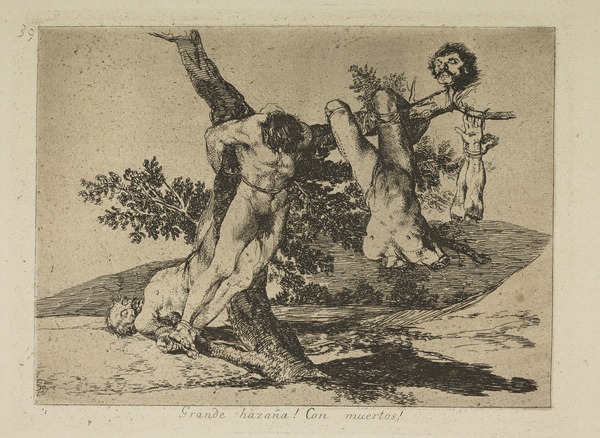 A heroic feat! With dead men! (Grande hazana! Con muertos!), Plate 39 of The Disasters of War. Out of Copyright, National Galleries of Scotland.

War is often described as a spectacle, which makes the witness a spectator. For Goya, Dix and Baran, the spectacle of war centres on their depictions of atrocity – particularly in relation to the human body. As Reva Wolf argues, Goya viewed horror in terms of a Burkean sublime: “Goya emphasized the dark human impulses […] that lead us to watch brutal acts”. The violence in Goya’s etchings is aimed at the human body, like the woman’s wrestle against the soldier, or maimed and hanging corpses that appear in the portfolio, plate after plate. Meanwhile, art historians such as Donald Kuspit have shown the relationship between Dix’s war etchings and his portrayals of Berlin’s underworld of cabarets, brothels and circuses during the inter-war period of Weimar Germany.

Baran’s work responds to contemporary wars in which the spectacle has become a tactical tool. The ‘shock and awe’ tactic of the 2003 invasion of Iraq, was based on the use of spectacular displays of force to paralyse the enemy’s perceptions of the battlefield and destroy their will to fight. As such, the Iraq campaigns also dominated Iraqi television and radio channels with regular broadcasts about the success of the invasion. Such a tactic is perhaps echoed in Baran’s sketches and The Last Meal which depicts the immediate aftermath of a catastrophic shelling. Baran’s portrayal of violence is also directed at the human body. “There is a real Goyaesque feel about his figures,” explains Tamara Chalabi, co-curator of Fatherland, “the sense of anguish and torment is strongly related to the movement of the human body.” The drawing’s bird’s eye perspectives keeps the viewer at a distance from the scene, like a spectator. The soldiers lie flat on the ground, often curled or in foetal positions. But despite the stillness of the dead figures, Baran’s studies show his attempts introduce a choreographed action (see drawings 1, 2, 3), thus likening the catastrophe to a dance or performance. 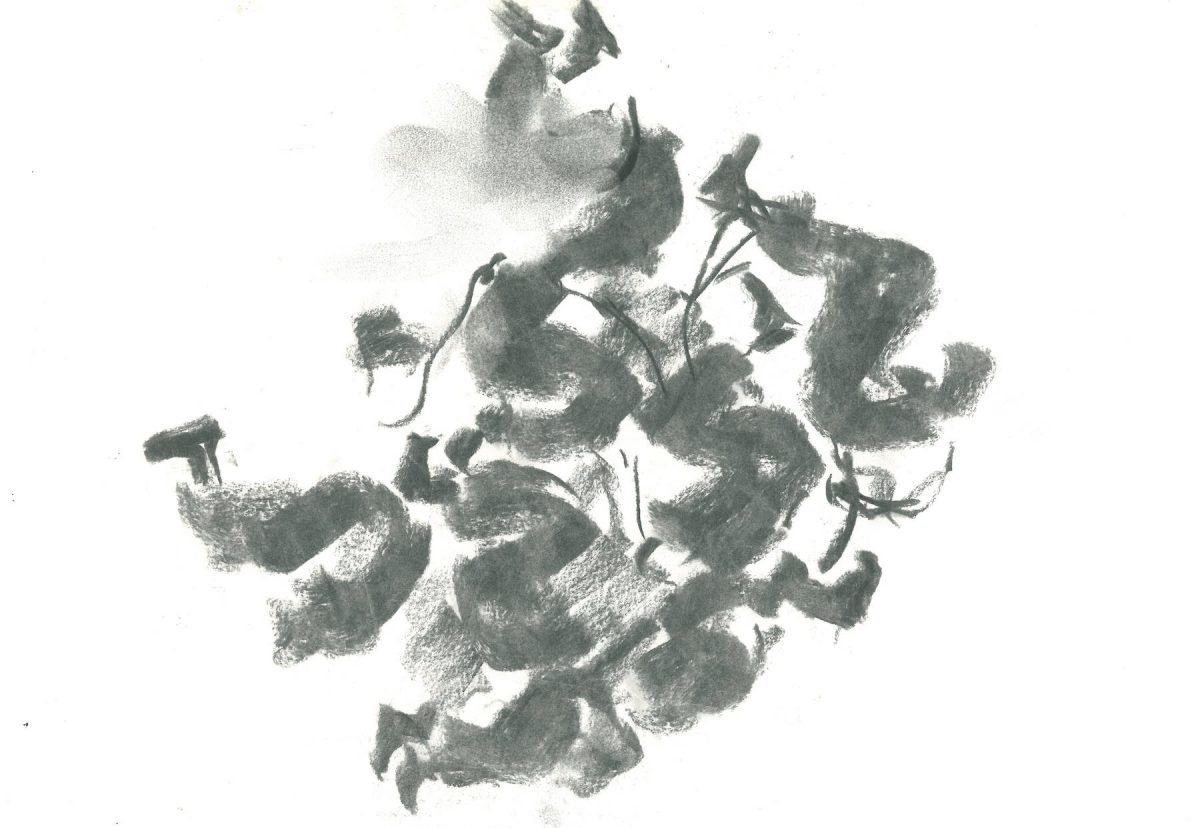 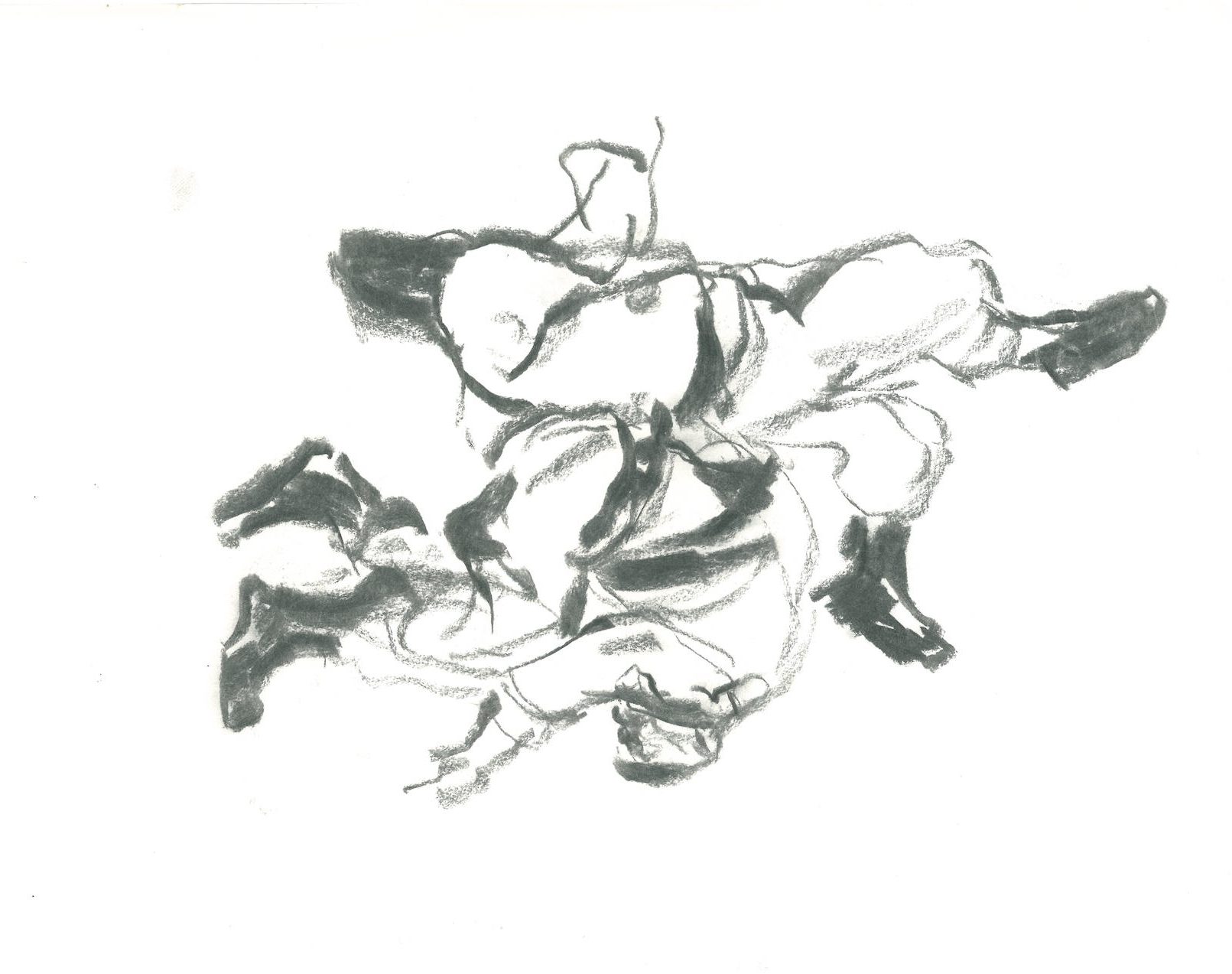 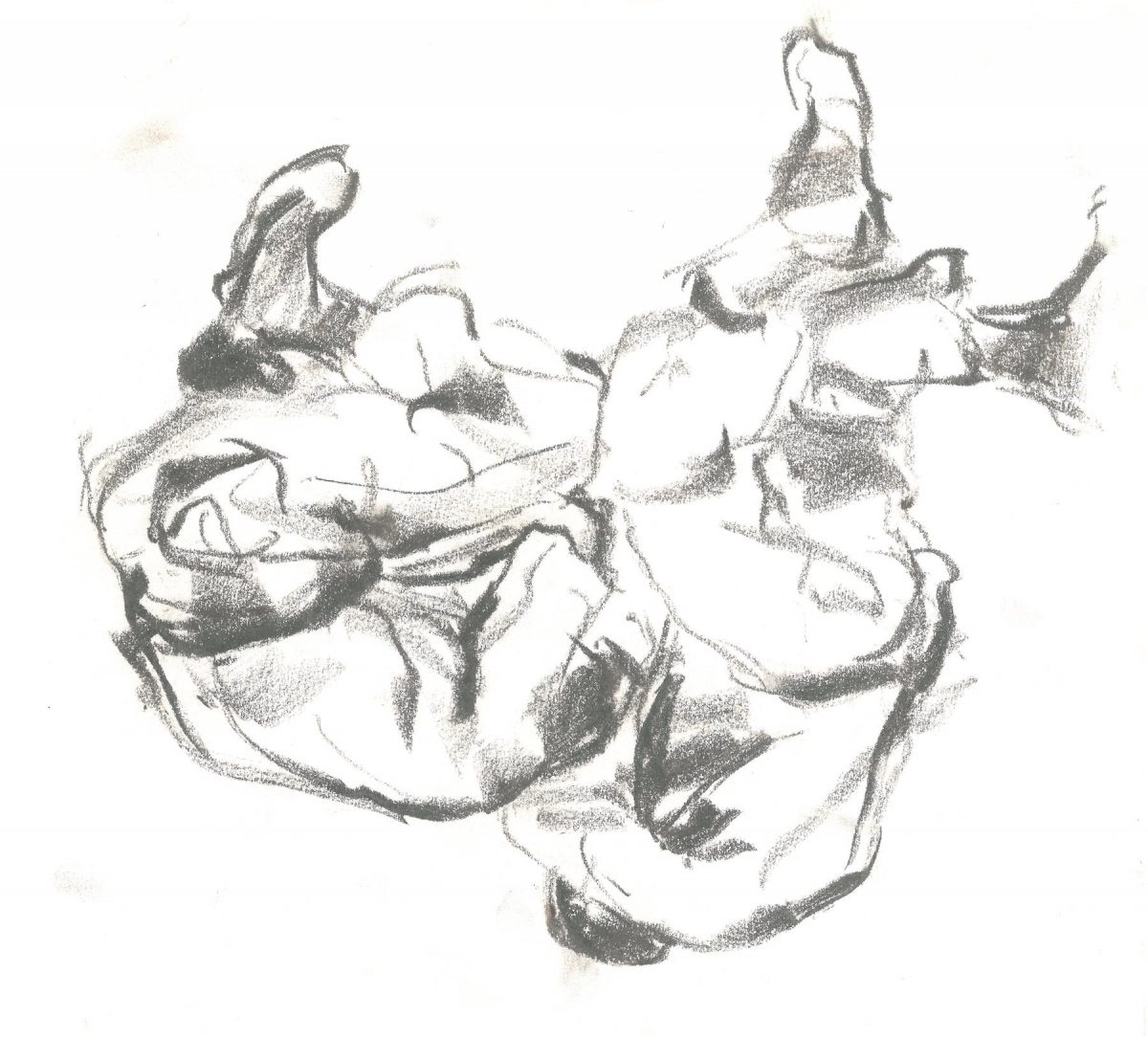 Equally, as Goya’s Disasters shows, witnesses can be bystanders, participants or the victims themselves. In his etching ‘No Quieren’ (They Don’t Want It), Goya depicts the rape of a village woman by a soldier. Looking at or away from atrocity, is central to the movement between the figures in this scene. The woman and soldier are alone but another villager creeps up behind him unnoticed. While the soldier’s glare is fixed on the village woman, she looks away from her attacker, unable to bear the sight of her own rape. She pushes her hand into his face, as if to stop him from looking too. Meanwhile, the villager raises his spear, which he will plunge into the soldier’s back. By intervening on the the rape, he perpetuates a new crime. In an implied sequence of events, the woman becomes the unreliable witness of the soldier’s murder. 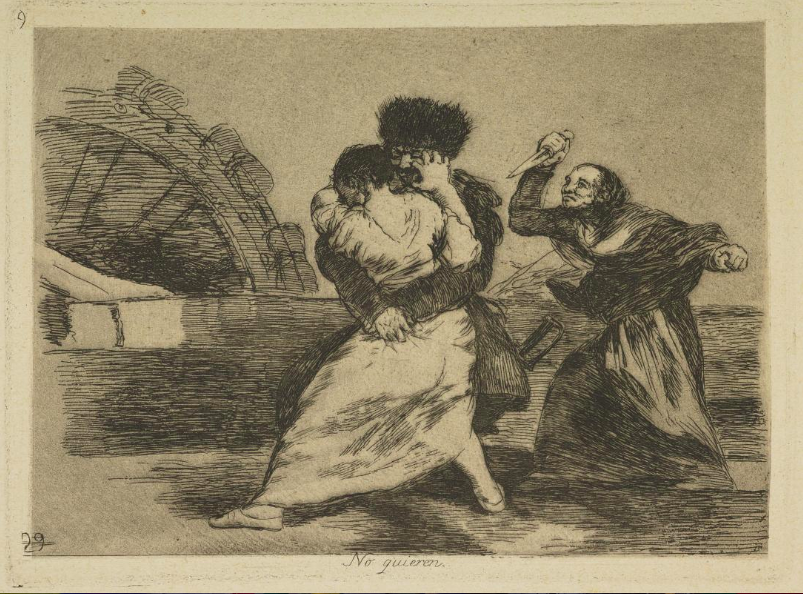 No Quieren (They don’t like it), Plate 9 of Los Desastres de La Guerra (The Disasters of War) (Harris No. 129 III)
Out of Copyright, National Galleries of Scotland.

Goya distinguishes between the onlookers depicted in the Disasters, and his role as a removed, omniscient narrator. The first plate is famously accompanied by the caption, “Yo lo vi” (I saw this). This rhetorical device gives credence to events which may appear too horrific to be true. But by asserting his presence in these scenes, Goya also raises questions about the artists’ moral position as an observer. Why is he looking? Why did he not intervene, as the villager does, to save the woman?

By contrast, Dix and Baran depict war from their own perspective as former soldiers. As Kuspit argues, though Dix’s portrayals of war rail against the bourgeois systems that engendered them, they are also imbued with the artist’s own feelings of guilt as a participant and a survivor. “Dix came back from the war to become its angry witness, while many of his comrades-in-arms did not, which left him with a residue of unconscious guilt, masked by his self-consciously fierce, gruesome face,” writes Kuspit. Baran’s sketches also dramatize his experience as a soldier. In an interview, the artist said that he uses images of his own body, lying in contorted positions, as a model for his sketches of anonymous soldiers. He describes his desire to involve the deceased soldiers in his work as “co-authors”, perhaps as an expression of his own survivor’s guilt. Such performative techniques, stress the artist’s own participation in the war, as if he were physically reliving what he himself saw on the battlefield. 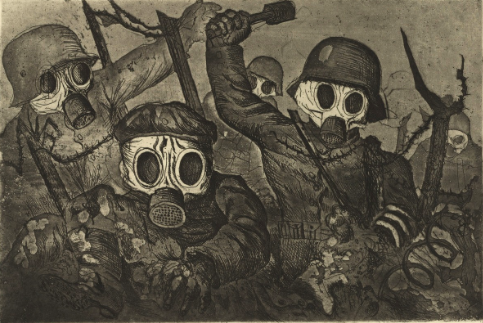 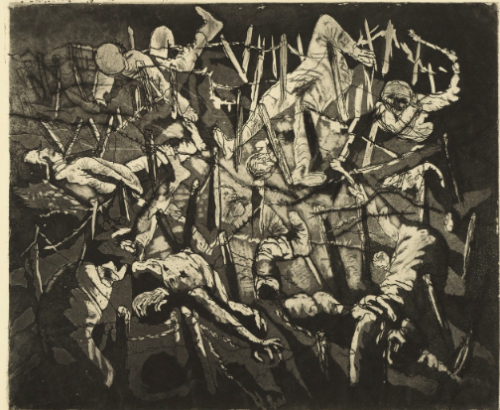 In his understanding of the witness, Dix conflates the points of view of the artist, soldier and viewer. His compositions in Der Krieg often embed the viewer within the scene, as if to share the artist’s own vivid recollections. In the plate Stormtroops advance under gas, the marching troops appear close up, losing their balance as they trudge through marshes, as though about to stumble onto the viewer. Their positioning slightly above eye level implies that the viewer is a part of the scene. The technique is almost cinematic in its attempts to capture a moment in time. Such a chaotic scene is a stark contrast to rigid army parades, and serves as a social critique of militarised society. Dix plunges his viewers – against their will – into the battlefield. This absence of agency echoes his own view of conscripted soldiers as victims of war, rather than perpetrators.

By contrast, the viewer in Baran’s sketches and The Last Meal is physically distanced from the scene through the use of a bird’s eye view. The soldier’s lying bodies are entirely visible, without the distortions of perspective. Such an emphasis on visibility and full disclosure echoes issues surrounding the factuality and accuracy of contemporary war images. These are present in the information and culture wars which now play a crucial role in contemporary warfare, including the during the Iran-Iraq war, the shock and awe tactics of the American invasion, and most recently the war with IS.

However, the aerial perspective also implicates the viewer in the scene. The suggestion of an airborne attack, from a plane or a drone, turns the passive viewer into an implied participant in the crime. The mediatised diffusion of war reporting brings contemporary conflicts into the safety of the viewer’s home. By contrast, Baran’s work implies that even passive viewer has an implied role in the conflict on their screens – either as citizens of an invading force, or bystanders with a capacity to speak out and effect change. 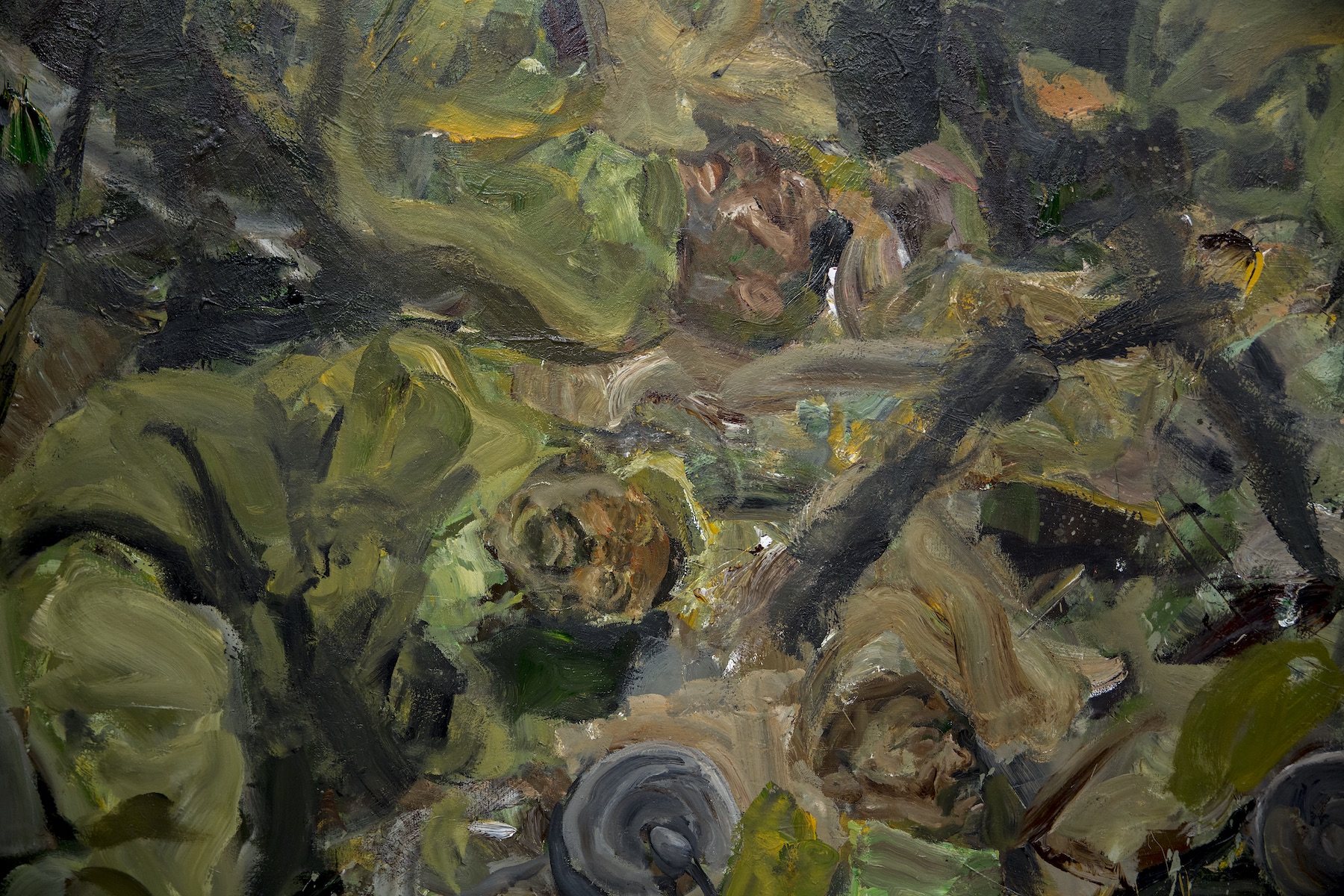 Serwan Baran, Detail from The Last Meal (2019). Courtesy of the artist.

Eyewitness accounts are essential in the condemnation of atrocity, yet these fragile perspectives also raise questions about the role and the responsibilities of the witness. While all three artists condemn war, they draw the viewers through war’s alluring spectacle and the violence that it inflicts on the human body. For Goya, who chronicled the events of the Napoleonic invasion in secret, the variety of witnesses serves to give credence to crimes that seem too horrific to be true. Dix attempts to recreate his own experience of the trenches for the viewer, in a searing social critique of war and the militarised society of Weimar Germany. Yet in doing so, he also highlights his own sense of guilt as a soldier and survivor. Both series of etchings can help us better understand how Serwan Baran’s own position as a ‘guilty’ artist and a reluctant soldier informs his understanding of the witness, and the moral responsibilities he assigns to his viewers as “witnesses of the crime.”