Salam Atta Sabri’s series ‘Letters from Baghdad’ (2005- 2015) has inspired an ongoing collaborative project with the Belgian artist Ronny Delrue. For nearly two years, Sabri, in Baghdad, and Delrue, in Ghent, have exchanged visual letters which depict their daily lives in their home cities. The collaboration gives insight into the worlds of two artists who share a similar age, gender and professional experience yet live worlds apart in Belgium and Iraq. Delrue is a Belgian artist of international renown, whose work often questions the phenomenology of drawing and painting itself. He is a lecturer in at the LUCA School of Arts, Ghent and has a PhD in the Arts from the University of Leuven. Sabri trained as a ceramicist at the University of Baghdad and the California State University, and is a lecturer and the Institute of Folkoric Arts, Baghdad. After 16 years in Jordan, Sabri returned to Baghdad in 2005, and became director of the National Museum of Modern Art in Baghdad (2010-2015).

Both artists spoke to Ruya about their ongoing collaboration. 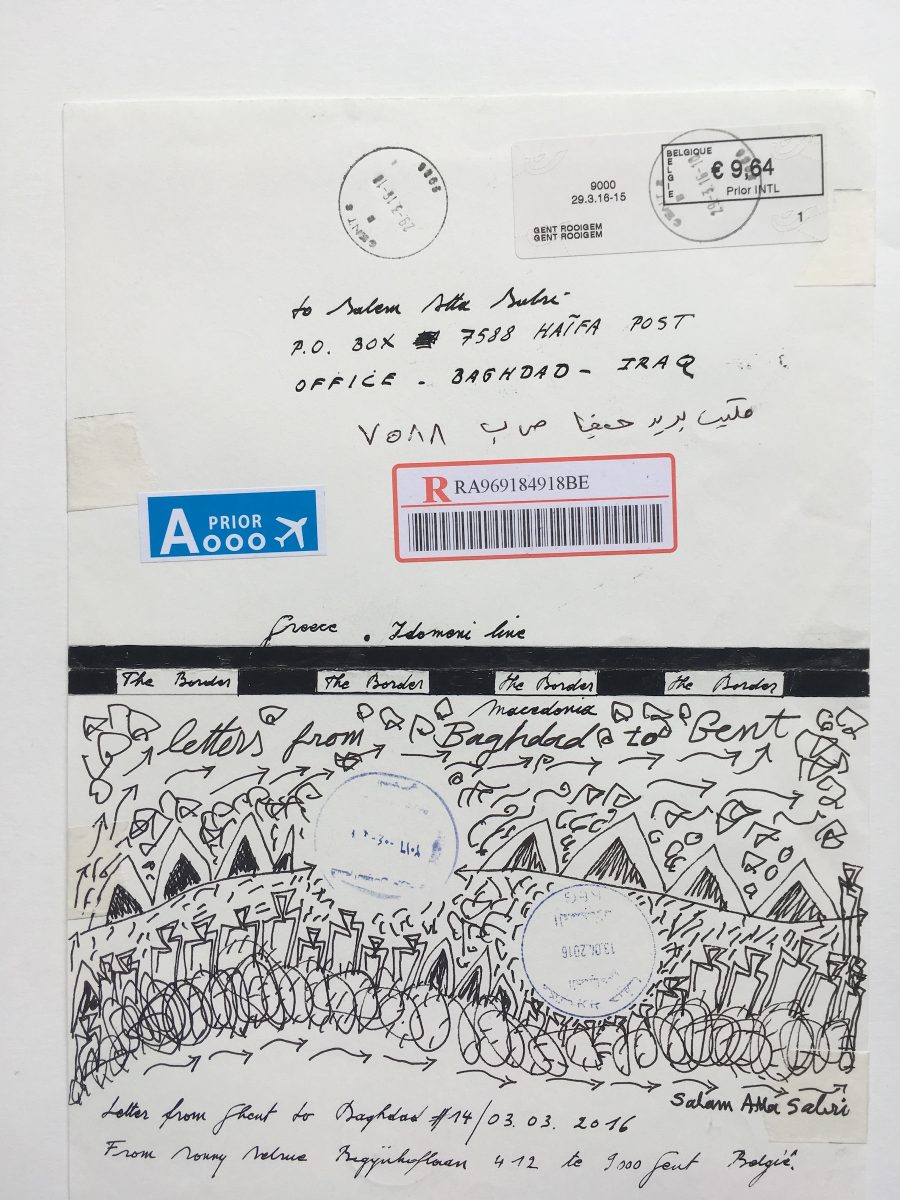 When I visited Ronny nearly two years ago in Belgium, he suggested that we prepare an exhibition for 2018. I immediately laughed because in Baghdad we can’t even plan the next five minutes. Ronny was surprised. “Don’t you keep a calendar?” he asked.

My drawings had been selected for Drawing: The Bottom Line (2015), a group exhibition at the S.M.A.K (Museum for Contemporary Art) in Ghent. The museum’s director Philippe Van Cauteren introduced me to Ronny, who invited me to work from his studio. On the first day, he noticed that I was working and drawing really fast. I said “I just really love your studio”. It is in an old building, a 100 year old townhouse, which he has refurbished. I loved the walls and the clay bricks – he painted over them like artworks. He has even painted the stairs across the three floors of the building. We drank tea that he’d bought in China. 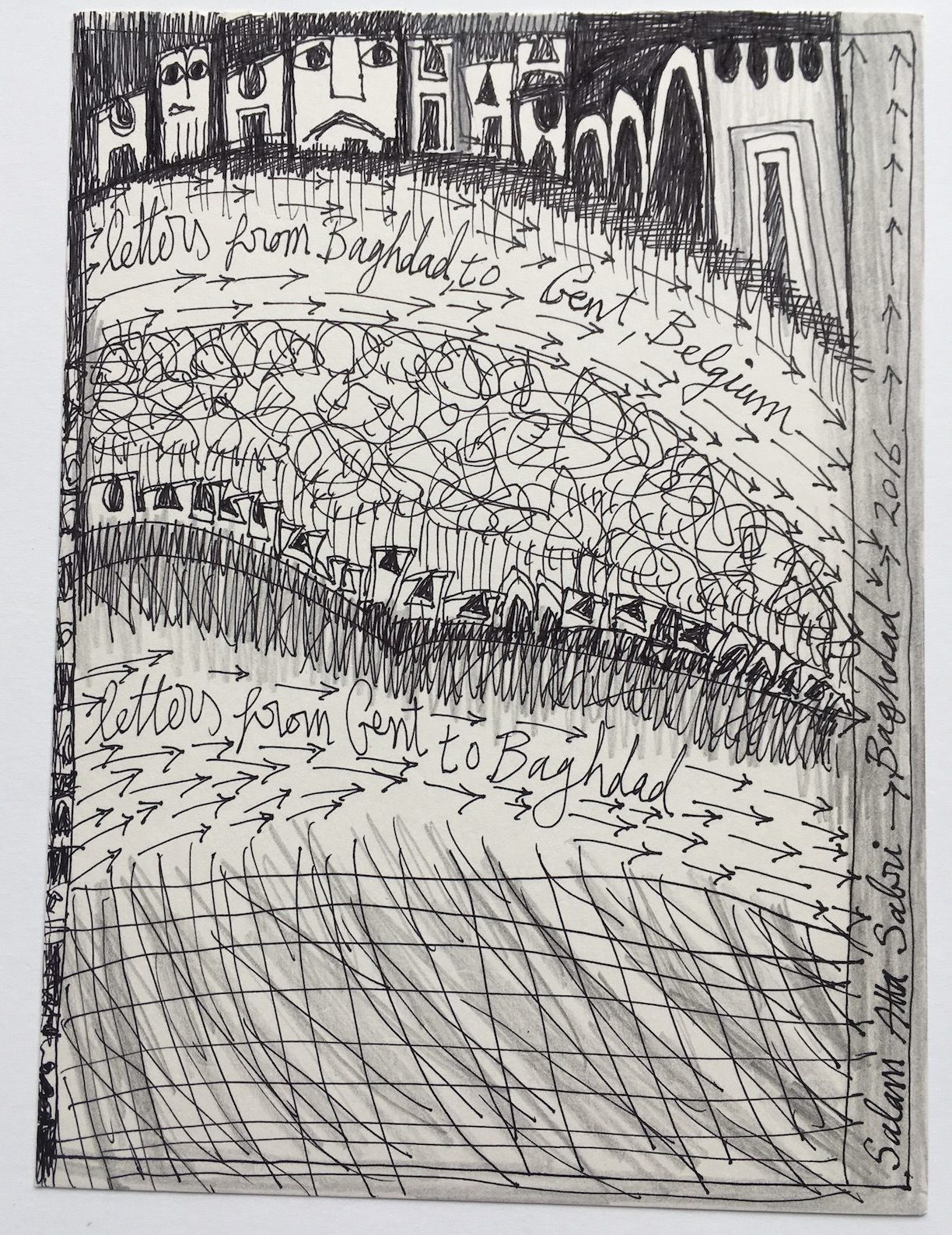 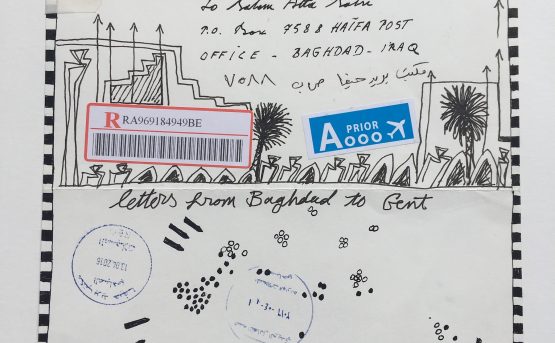 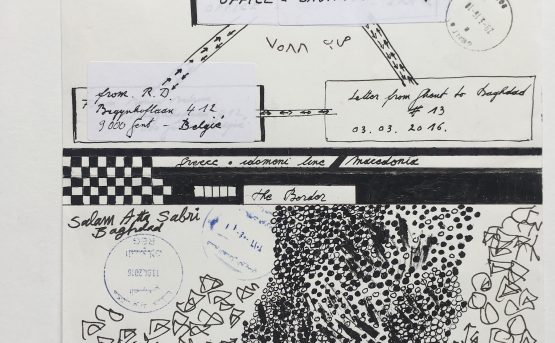 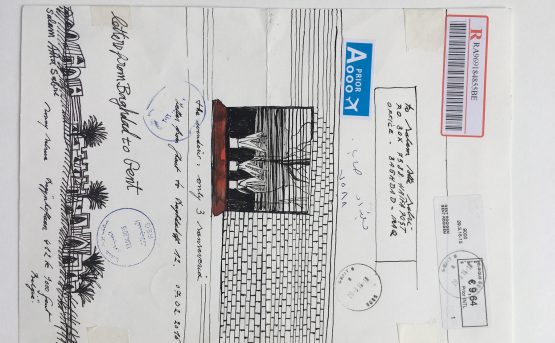 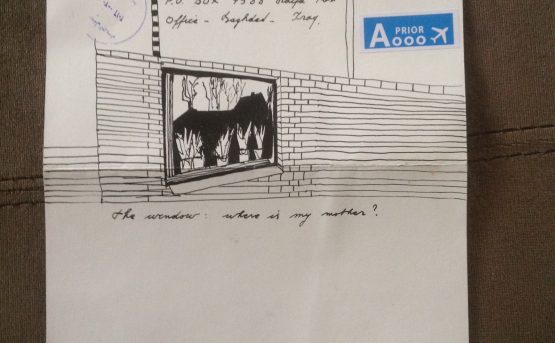 I loved the atmosphere of Ronny’s studio. I can’t afford a studio in Baghdad, especially not an oven for ceramics. Though my drawings often reference public spaces, monuments and parks, I work from the table in the living room of my apartment on an A4 pad. The security situation makes working outdoors difficult, but I also prefer to be alone with myself when drawing. We live on the 13th floor on a building overlooking the Tigris. From the balcony I can see the historic architecture of old Baghdad, and beyond it the chaos of the new city. I’d like to see more cultural activity in the city.

I’ve been collecting Ronny’s letters. I even keep the stamps. For me, the project shows that there are no real borders between the East and the West.

When I get a letter from Salam in the post, I hold it in my hands, and I think about the time that it took to arrive from Baghdad to Ghent. Today, we can communicate immediately through text messaging, the internet and phone calls. But these letters take up to six weeks to arrive. Drawing is a line on paper. It is a simpler, faster and more naked medium than painting. But to produce these drawings in the form of letters takes time. Art is something that should take time.

I was looking for possible collaborations as part of my research project ‘Drawing is Thinking, Thinking is Moving’. Philippe Van Cauteren’s first recommendation was Salam, and he brought him to my studio. I have just finished my 65th letter. Salam told me that the postman always calls him to let him know that a letter has arrived from Ghent. It reminds of Michael Radford’s film Il Postino (1944), about a postman who learns to love poetry by reading Pablo Neruda’s letters. 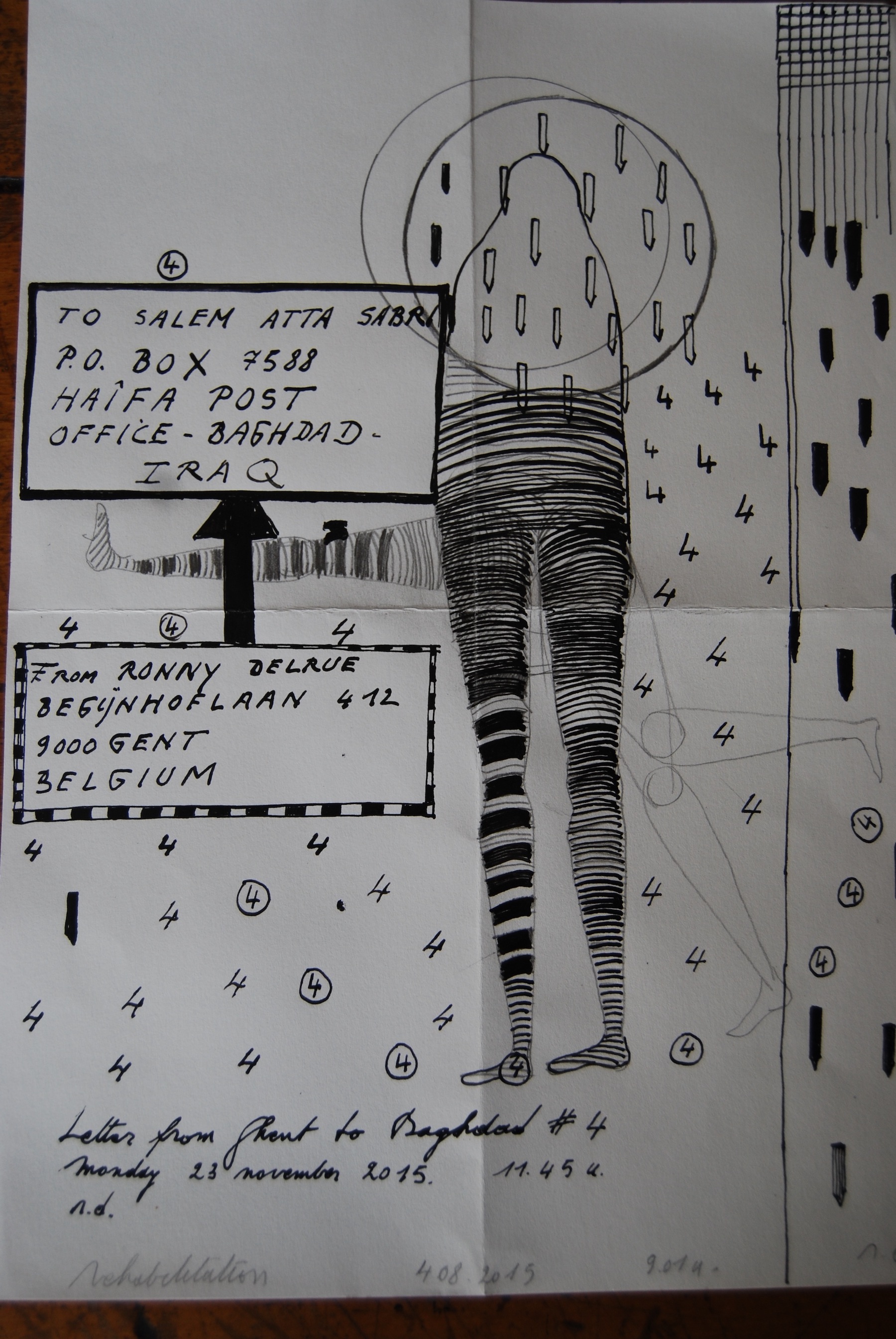 Each letter is different, but I hope that once assembled they will provide a historical record of the past two years. We live in turbulent times. One of my last letters was a collage about two prisoners in Turkey that I had seen on the news. When the attacks took place at Brussels airport, I also thought of Salam and his daily life in Baghdad. It gave me a broader perspective on these events.

Our personal lives are in these letters too. I had operated my leg in the summer of 2015, and often wrote to Salam about the long healing period. I was recently in New York, and I drew a mental map of the area that I was stayed in, on the East Side of Central Park. I have also sent him letters from Kathmandu, and from Malta when I was there with my family earlier this year. 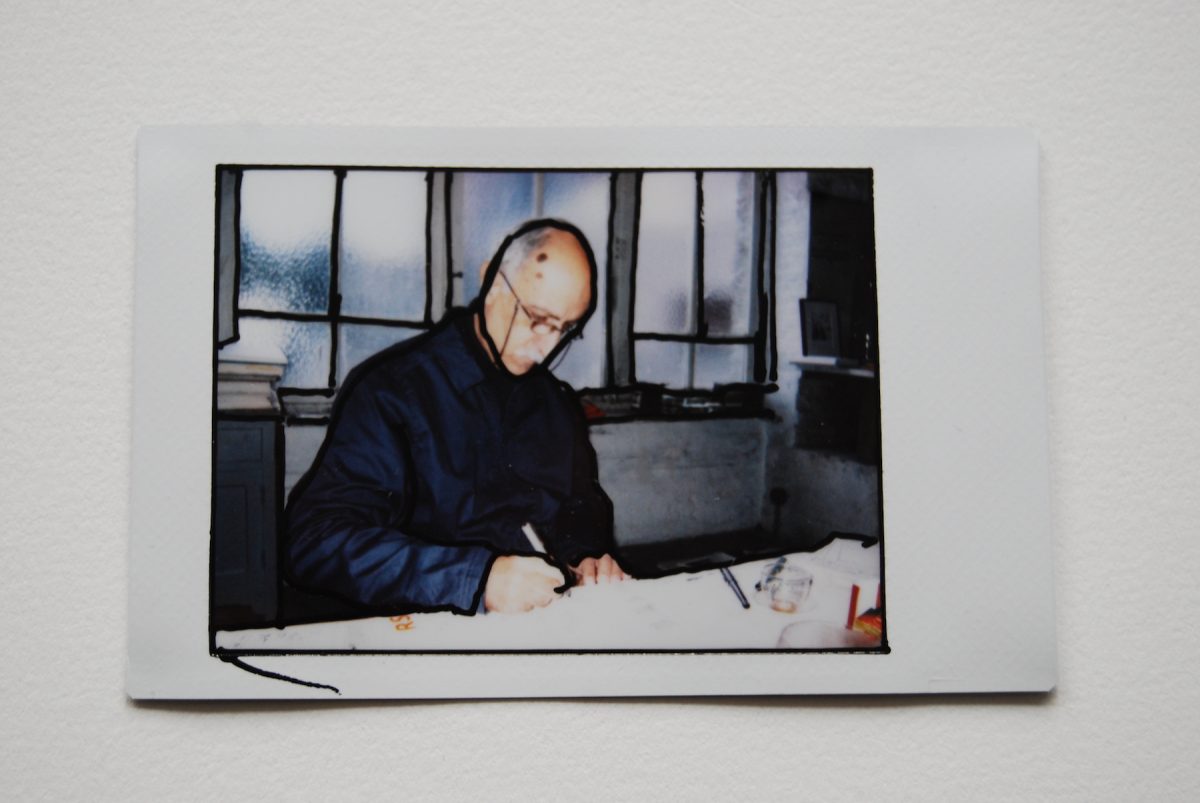 Salam has become like an alter ego. I think of him when I read the news in the morning and when I learn, experience or visit something new. I sometimes worry about sending letters from my travels when, as an Iraqi citizen, Salam’s own movement is limited. But all these experiences are real and must be put to paper. 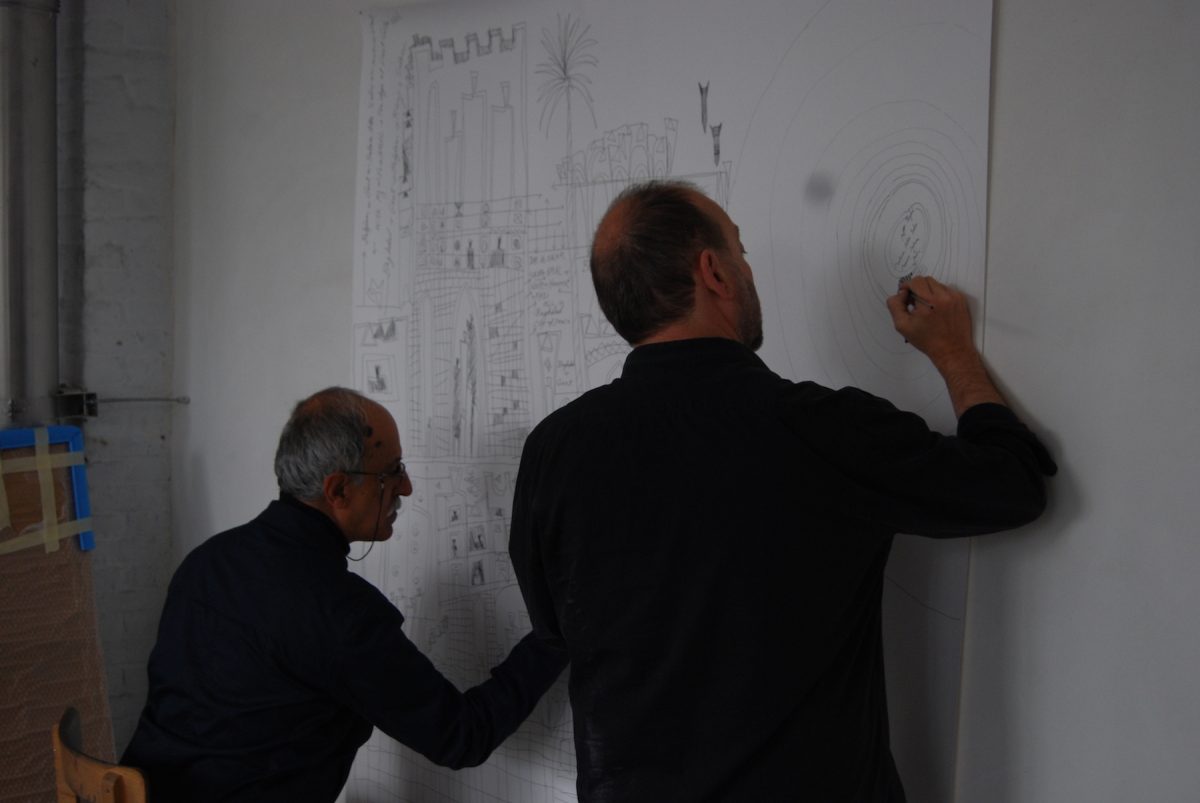