Luay Fadhil (b. 1982, Baghdad) is a film-maker based in Baghdad. After training as a construction engineer, Fadhil took a course in film-making at the New York Film Academy Abu Dhabi. He has since directed seven short films. Lipstick (2012), about sex education classes at a boy’s high school in Baghdad won the Gold Award at the Festival International du Film Oriental de Genève 2014. His most recent film Cotton (2013), about a young girl from a village outside Najaf, a holy city for Shi’a Muslims, won several awards including Best Director at the Dubai International Film Festival 2014. Fadhil has been commissioned to produce a new work for ‘Archaic,’ the Iraq Pavilion at the 57th Venice Biennale. The film is about the ardahalchis or scribes still found in Iraqi cities, who write letters and draft official documents for people outside public buildings.

You say that you don’t want to make films about war in Iraq. Why not?
There are so many films about the war in Iraq. I want to tell a different story, and address universal themes that audiences from all over the world can relate to. During my course at the New York Film Academy in Abu Dhabi, we got to speak to the Hollywood director James Cameron, who directed the blockbusters Terminator (1984), Titanic (1997) and Avatar (2009). When we told him we were from Iraq, he said, ‘if I made a film about Iraq, it would be about love. The war would be a part of the subtext’. Since then I’ve been trying to make films about universal themes where the ongoing war is something in the background. I want to focus on visual gestures and language that are universally understandable. That is why there is no talking in my films like Lipstick and Cotton.

But the films that you have made are not Hollywood-style love stories. Mostly, they address taboos around sexuality and social issues that are specific to Iraq.
Yes, and I am not influenced by Hollywood either, but by filmmakers like the Iranian directors Abbas Kiarostami, Ashgar Farhadi, Majid Majidi and the Serbian Emir Kusturica. I like the naturalism and realism of these directors. Kiarostami used real people in his film Taste of Cherry (1997), rather than trained actors. I have adopted this technique in my films.

How has the film scene developed in Iraq, since you began working?
Under Saddam, the only feature films being made were propaganda films. After 2003, filmmakers in Iraq could make films without censorship from the Ba’ath party. This lead to a new wave in Iraqi cinema. Directors like Oday Rasheed and Mohammed al Daradji were the first to try and make films in the years after 2003, and they inspired others. Iraqi filmmakers started participating in Middle Eastern and international film festivals, and winning awards, for example Najwan Ali won an award at the Tribeca Film Festival for Nesma’s Birds (2013). However in the last three years the culture has changed. Less films are being made, and many are dedicated to the fight against ISIS, and celebrating the Iraqi army. 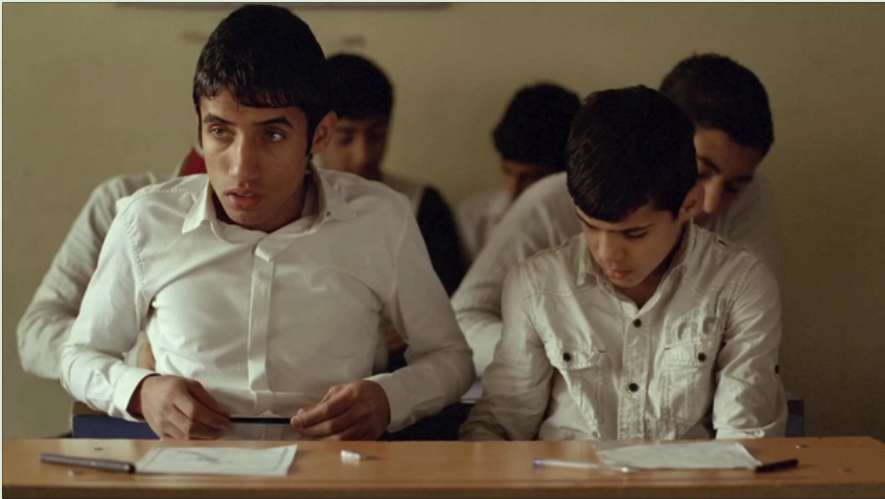 Luay Fadhil, still from Lipstick (2012). Courtesy of the artist.

Luay Fadhil, still from Lipstick (2012). Courtesy of the artist.

Two of your short films, Lipstick and Cotton deal with puberty, in boys and young women respectively. Why is this an important issue for you?
There is no sex education at school in Iraq. This affects the boys in the classroom of Lipstick, and the girl on the farm in Cotton. The absence of a sex education has caused a lot of health problems for women in particular, who are not taught about their periods. I have wider concerns about the education system in Iraq. Our schools have a harsh and hierarchical approach to teaching. Lipstick is based on my own experiences at school. The boys in the film just want to play. They covet Nike shoes, like I did at the time, and harass their teacher. Teenage years are the most dangerous in the development of a human being. These are the fragile years when a person’s ethics and opinions are formed. The terrorists and militias that we have in Iraq today are often recruited as teenagers.

You shot Lipstick in a real classroom. What where the challenges of doing this?
I worked for four days at a local school in Salhiya. Not all the pupils attended the four days, so we struggled to maintain continuity in the scene. The youngest protagonist in the film, Wafic Hisham came from an orphanage. He could not read or write, so we had to improvise and prepare each scene on the spot. Unfortunately, the boy has gone back to the streets, and I lost contact with him. 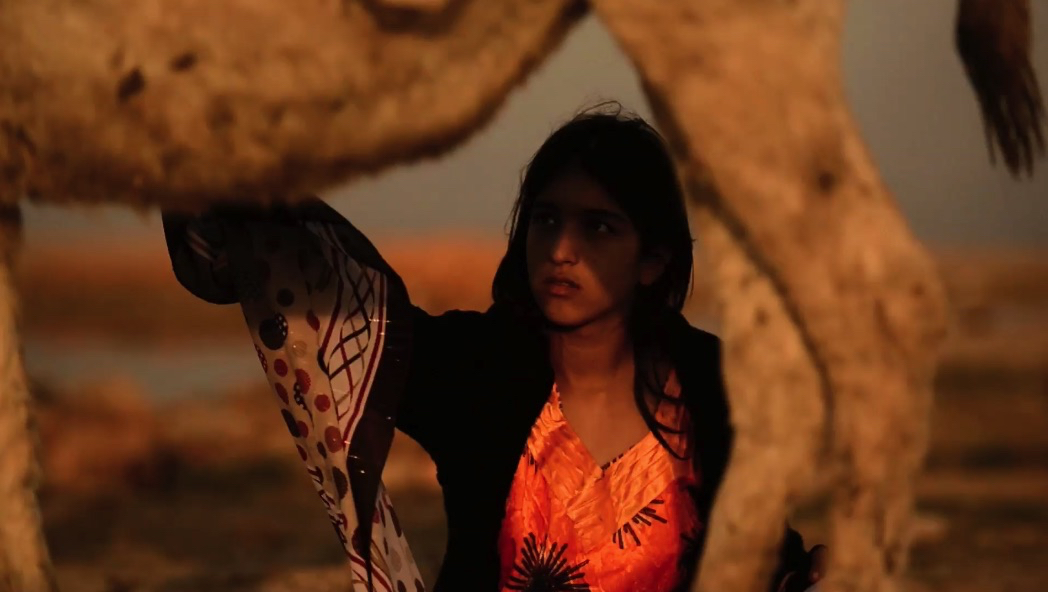 Luay Fadhil, still from Cotton (2013). Courtesy of the artist.

By contrast, Cotton is the story of a girl from a farming family outside Najaf who has her first period. What inspired the film?
Cotton was inspired by a short story written in the 1970s by Ibrahim Ahmad, an Iraqi writer who is now based in Sweden. When I found out that Ibrahim Ahmad was still alive, but living in exile, I got in touch with him and we spoke extensively about adapting his story. I shot the film outside of Baghdad, and the characters on the bus were real passengers who volunteered to be part of the film. Visually, I wanted to tell a complex story without using words. I also wanted to make a film about women. They’re the origin of the earth, they bring us into life.

Are you making a reference to Ishtar, the Babylonian goddess of fertility?
Not consciously, but I like that connection. 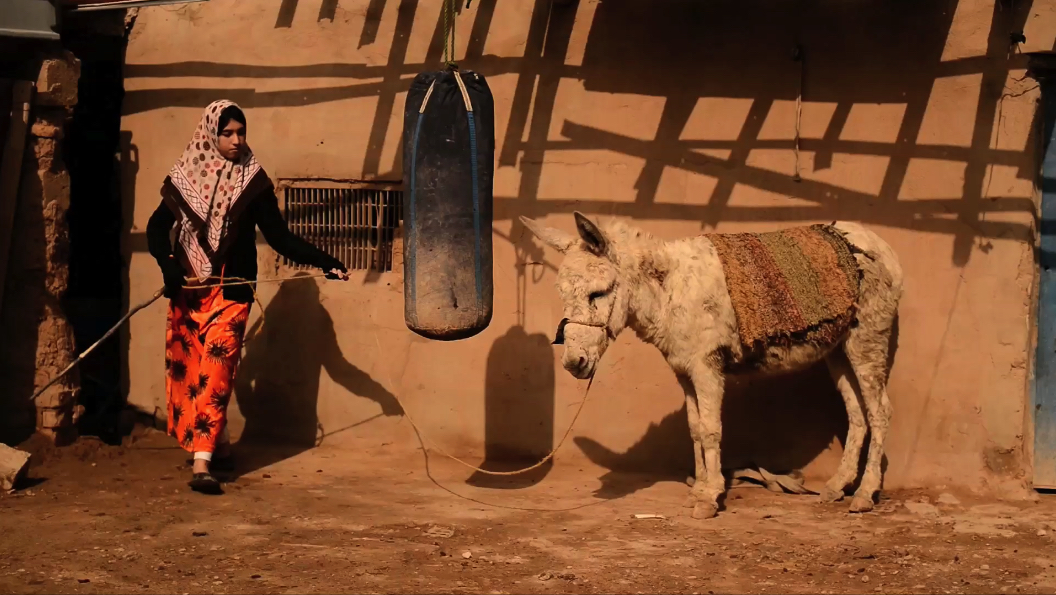 Luay Fadhil, still from Cotton (2013). Courtesy of the artist.

Cotton alludes to many issues that women face in Iraq, relating to puberty, sexuality and marriage. Shouldn’t a woman have made this film?
Yes, I agree. The problem is that unlike in Egypt or Lebanon, there are few women directors in Iraq. We have well known actresses and writers, but no film directors. Iraqi society favours men, and it is difficult for women to take up positions of leadership. 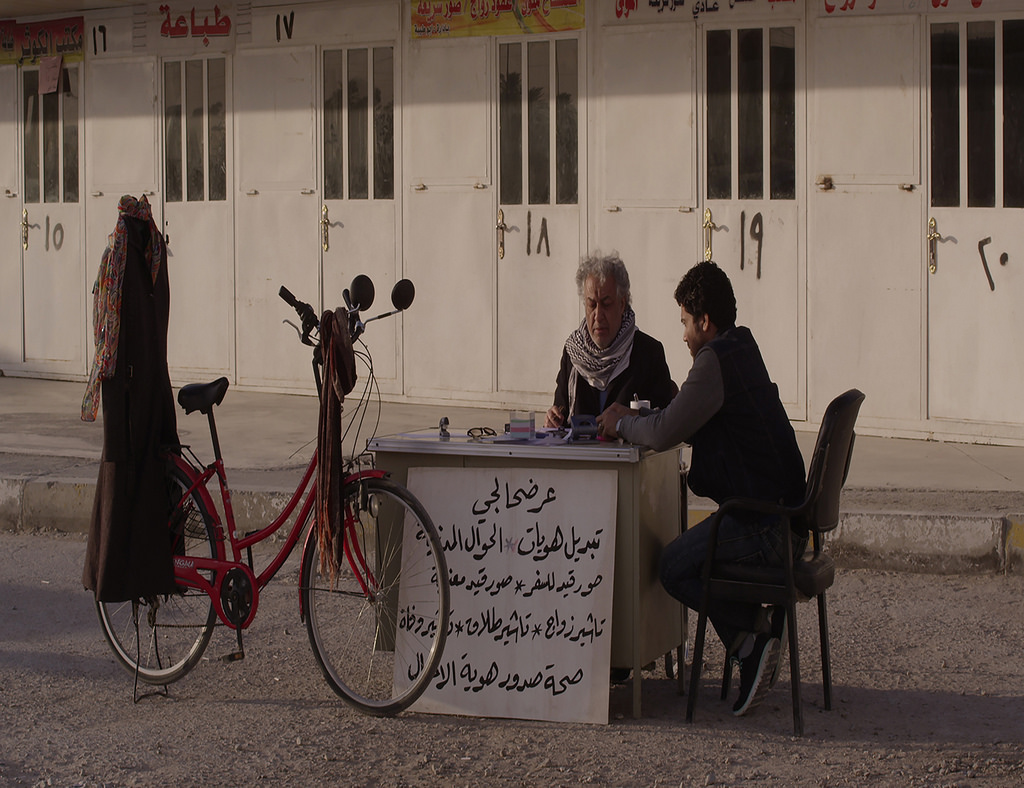 Your film Scribe (2017) has been commissioned for the Iraq Pavilion, in response to the theme ‘Archaïc’. How did you approach this topic?
All our paperwork can be done online or on the phone nowadays. Yet people in Iraq still use scribes for their legal documents. The tradition is so obsolete that it may die soon.

What were your early experiences of scribes in Iraq?
Everyone in Iraq hates the scribe, including the judges and lawyers who commission the documents. Scribes are known for adding extra regulations to increase the cost of their service. As a child, there was a scribe by the police station outside our house. I imagined that he was collaborating with local criminals. In my adult life, I have had to use a scribe under very difficult circumstances. 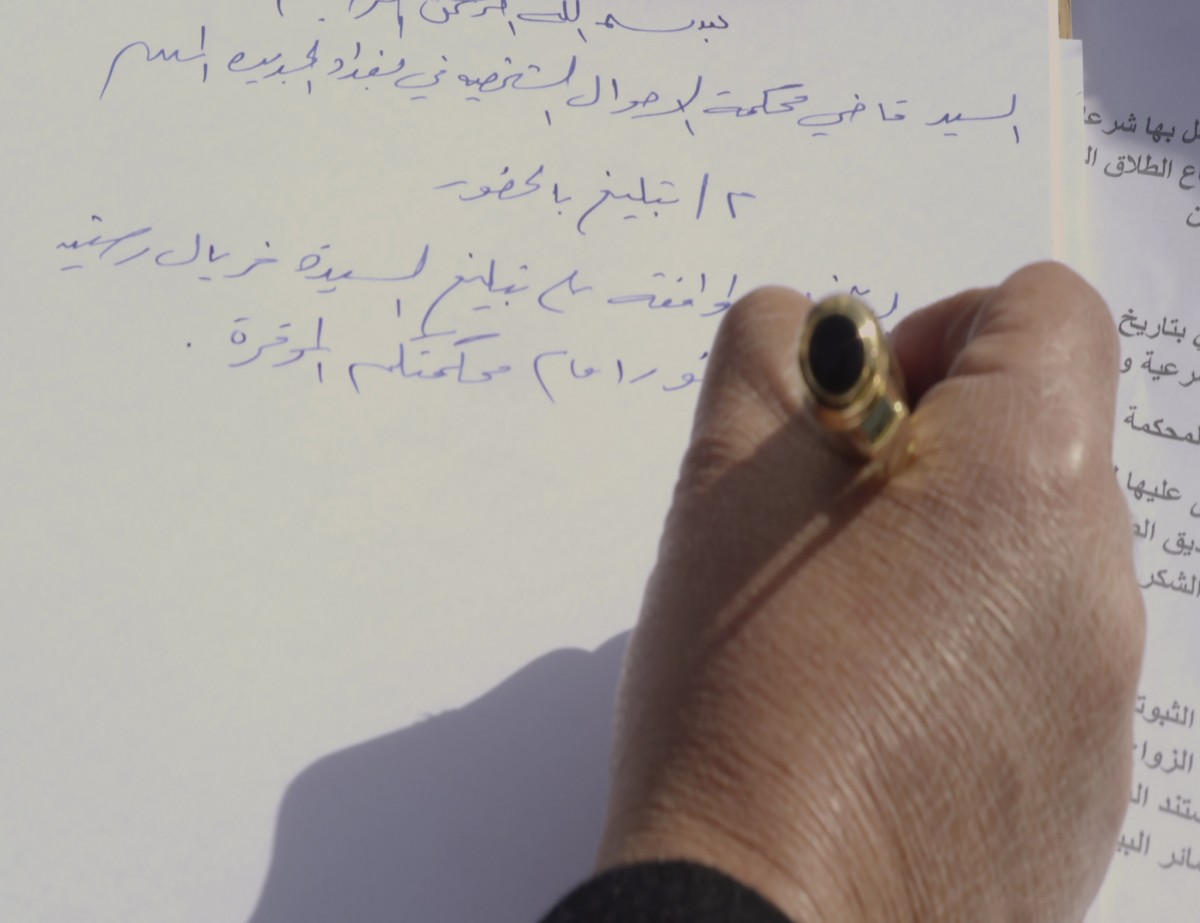 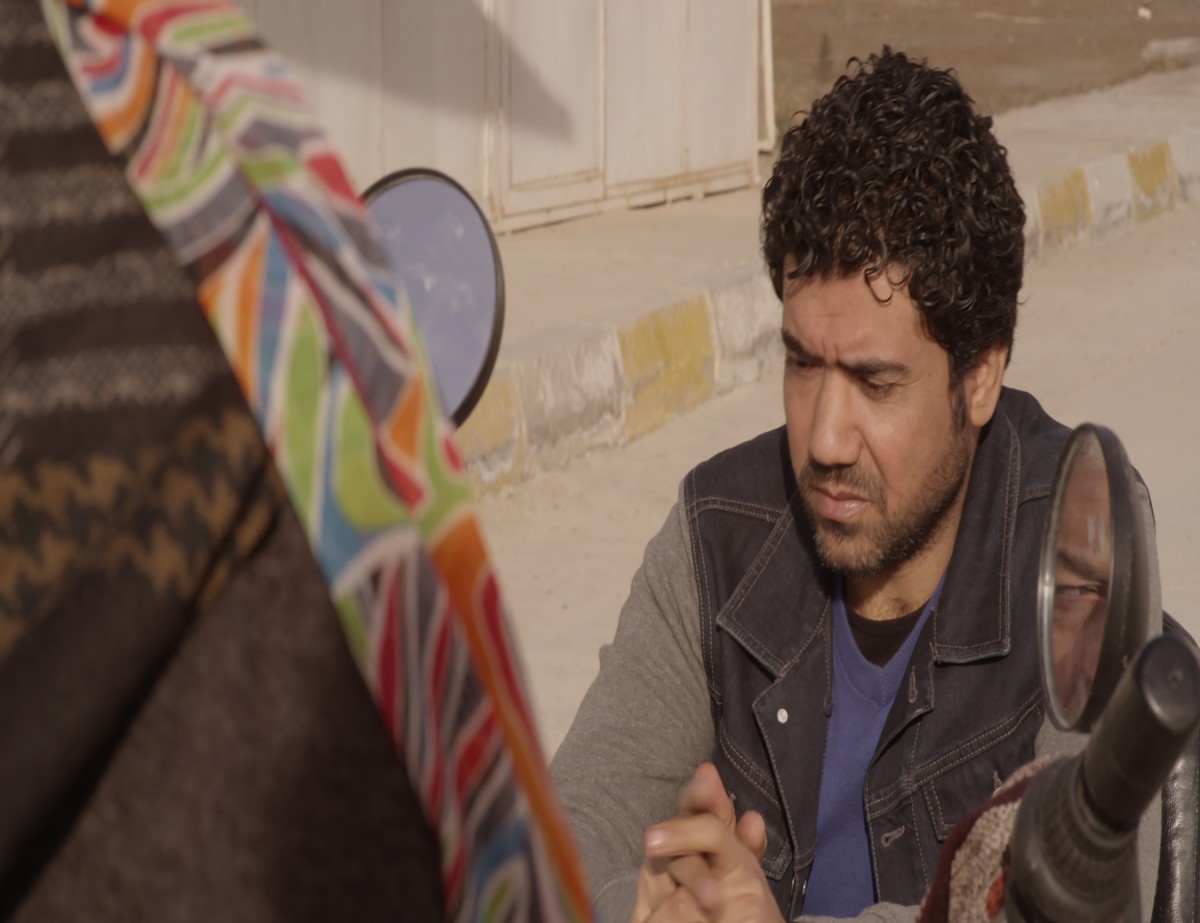 How did you research and develop the role of the scribe?
I sat with scribes and spent the day with them, several times a week for four months. I would watch them take customers and took notes. I realised that nobody was comfortable talking to the scribe. The scribes know all our secrets. We tell them personal stories about our families and loved ones.

You must have heard many stories about domestic and family life in Iraq when you sat with the scribes. Why did you focus on the story of a married couple?
It is also a personal film about mourning. In the film, the scribe knows that his client is mad from bereavement, but he does nothing to help him. He continues to write the letters and take his money. He has no humanity. The main character visits him daily to deal with his grief, like a therapist. He wants to believe that his wife is alive, because he loves her. He resurrects her by talking to the scribe.

Did your opinion about scribes change after spending time with them?
No. I still don’t like scribes and distrust them.

What does the film tell us about Baghdad as a city?
I first shot the film outside an old court on River Street when the street was empty. Then we filmed again outside a different court near Bab Al Sharq, on a busy day. Both are important and historic areas of Baghdad. I went to Bab Al Sharq often as a child with my father to the shops or to get photographs taken. The crowds around the scribe interrupt the scene constantly. I don’t like this busy-ness in the film, but that’s Baghdad. The war is a minor detail in the letter. The couple decide not to have children because they think it would be a crime to make a child grow up in Iraq. As I have a son, I often think this. I would rather he left Iraq.

Do you want to leave Iraq?
Yes, but my life is here. My son, my family and my job are in Baghdad. If my son leaves one day, I will follow him.

Did you use a real scribe for the film?
You’ve seen the film… what did you think?