Sherko Abbas (b. 1978, Sulaymaniya) is a multimedia artist who lives and works in Sulaymaniya, Iraq. Abbas works with video, performance, text and found objects. In 2013 he was awarded a scholarship from the Kurdistan Regional Government to pursue an MFA at the University of Goldsmiths, London. Abbas’ work has appeared in various group shows internationally including ‘Estrangement’ at The Showroom, London (2012); ‘Dire Straits’ at Import/Export Studio, Kassel (2012); ‘Freedom at the Barricades?’ at the Vaxiö Konsthall, Sweden (2014); and Alternativa 2015 in Gdansk, Poland.

The Music from the Bush Era (2017) is a two channel video installation commissioned by the Ruya Foundation for ‘Archaic,’ the Iraq Pavilion at the 57th Venice Biennale. It is based on found footage of Abbas’ sister’s trip to the U.S. in December 2003, when she was a cellist with the Iraq National Symphony (INS). The orchestra were invited to play at the John F. Kennedy Center in Washington D.C., alongside the cellist Yo Yo Ma, to a large audience that included President George W. Bush, his wife, and Secretary of State Colin Powell. Using this personal footage of the journey as well as found objects, Abbas explores the role of music, politics and soft power in the Iraq War and the battle for hearts and minds.

Sherko Abbas, still from The Music of the Bush Era, 2017, two channel video installation with objects.

How did you come across this archive?
I hadn’t thought about the trip for a long time until it came up in conversation a year ago. As I was back in Sulaymaniya, I tried to find my sister’s tapes at home. There were four tapes in total, but two of them were damaged. One of my sister’s co-musicians also gave me their rushes.

What were the highlights?
This was my sister’s first time on a plane, and the first time she’d left Iraq. She didn’t have a passport at the time. The U.S. army created a travel document for the trip. My sister recorded everything: the journey to the airport, queuing for the plane, the flight, the suitcases on the conveyor belt and the music and the rehearsals. In D.C., she met one of her heroes, the cellist Yo Yo Ma. Yet nothing special happens in the footage. As an artistic activity, it was simple and human. She even doodled a palm tree on the tapes.

Your father was a filmmaker who covered the Anfal campaigns and the Kurdish uprising in the 1980s and ‘90s. Why did you decide to focus instead on your sister’s footage of 2003?
My father was a professional cameraman and filmmaker. His archive, which I am currently digitising, tells a lot about the Kurdish story, as well as daily life in Kurdish cities. I don’t want my work to be presented like a news story. It has to be emotional, something that can be felt. My sister filmed her personal experiences on poor quality 8mm film, using a personal sony camera that my father had bought her. She compressed the film using an SP format, which reduced the quality of the image. It looks unprofessional, and I like that.

Did your father ever teach you or your sister to use a camera
No, but we were exposed to his archive and his equipment. He was obsessed with cameras. 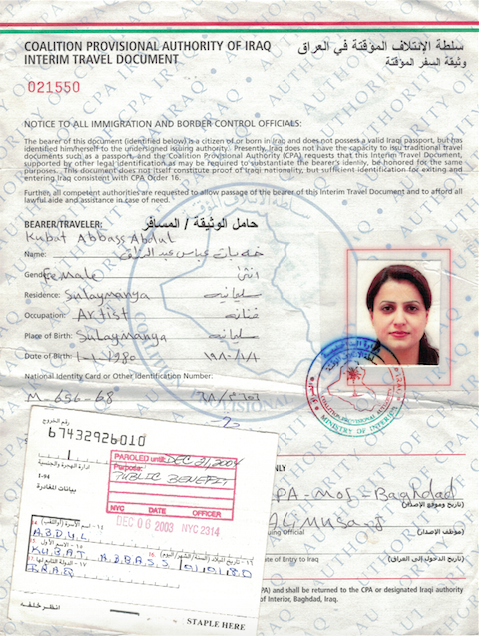 Going through the archive, what did it tell you about Iraq at the time?
The footage highlighted issues which I still experience as an Iraqi artist today. We are culturally isolated and our ability to travel is restricted by our passport. It is still difficult to find materials and equipment. The 8mm film that my sister used was the best available in Iraq at the time. We had just come out of a civil war in the Kurdistan Region, and people were struggling with poverty and the embargo.

Let’s go back to the film. How did you tell the story?
I selected footage related to travel, journeying and moving. The group of musicians spend a lot of the time up in the air on the plane and in the airport. They are symbols of displacement. I wanted to highlight the political dimensions of transportation. To get to Amman from Baghdad, they flew with the U.S. army on a Hercules plane – in Iraq we call it a hamouda. Then they got on a commercial flight to JFK Airport, New York City, and from there they took a bus to D.C. In D.C., they visited the National Air and Space Museum, as well as the city’s biggest mosque, and its oldest church. I have also used objects from the trip, such my sister’s travel documents, and the medal from the Kennedy Centre.

Why not focus solely on the concert and the music?
The second channel shows footage from the concert. The event was not about the music, it was about George Bush and his war in Iraq. The INS has existed since the 1950s. Yet at the Kennedy Centre, it was artificially used as a symbol of Iraqi co-existence. Ahead of the concert, the INS recruited members from different religious and ethnic groups living in the northern parts of Iraq. The media coverage of the event was also politicised. In a filmed recording of the concert by the Associated Press (AP), Yo Yo Ma, who plays alongside the INS, is left out of the frame. The focus is on the INS. I use a small extract of the AP film at the end, but with no sound, to highlight this.

How can music and culture be used as a political tool?
The philosopher Slavoj Žižek has written about Beethoven’s IX Symphony, which was appropriated as the Nazi national anthem, as well as communist songs in the Soviet Union and the Cultural Revolution in China. The INS played Beethoven’s piece ‘Egmont Op. 84’ at the Kennedy Centre. Lamoraal of Egmont was a Dutch nobleman whose beheading led to the popular overthrow of Spanish rule in the Netherlands. It was a revolutionary piece which Beethoven composed in support of a democratic republic. Its history evokes many things about Iraq today. Yet at the Kennedy Centre, it was played for a different purpose. I used the overture as a soundtrack for the film.

Why is this work relevant today, almost 15 years after your sister made the trip?
As an artist, I am investigating the past to understand the present. The map of Iraq today is fragile. It may not exist as it does for long. As an Iraqi and a Kurd, I am questioning this. We have new problems all the time in Iraq, which artists must respond to. Only artists can find out how we got to where we are now. 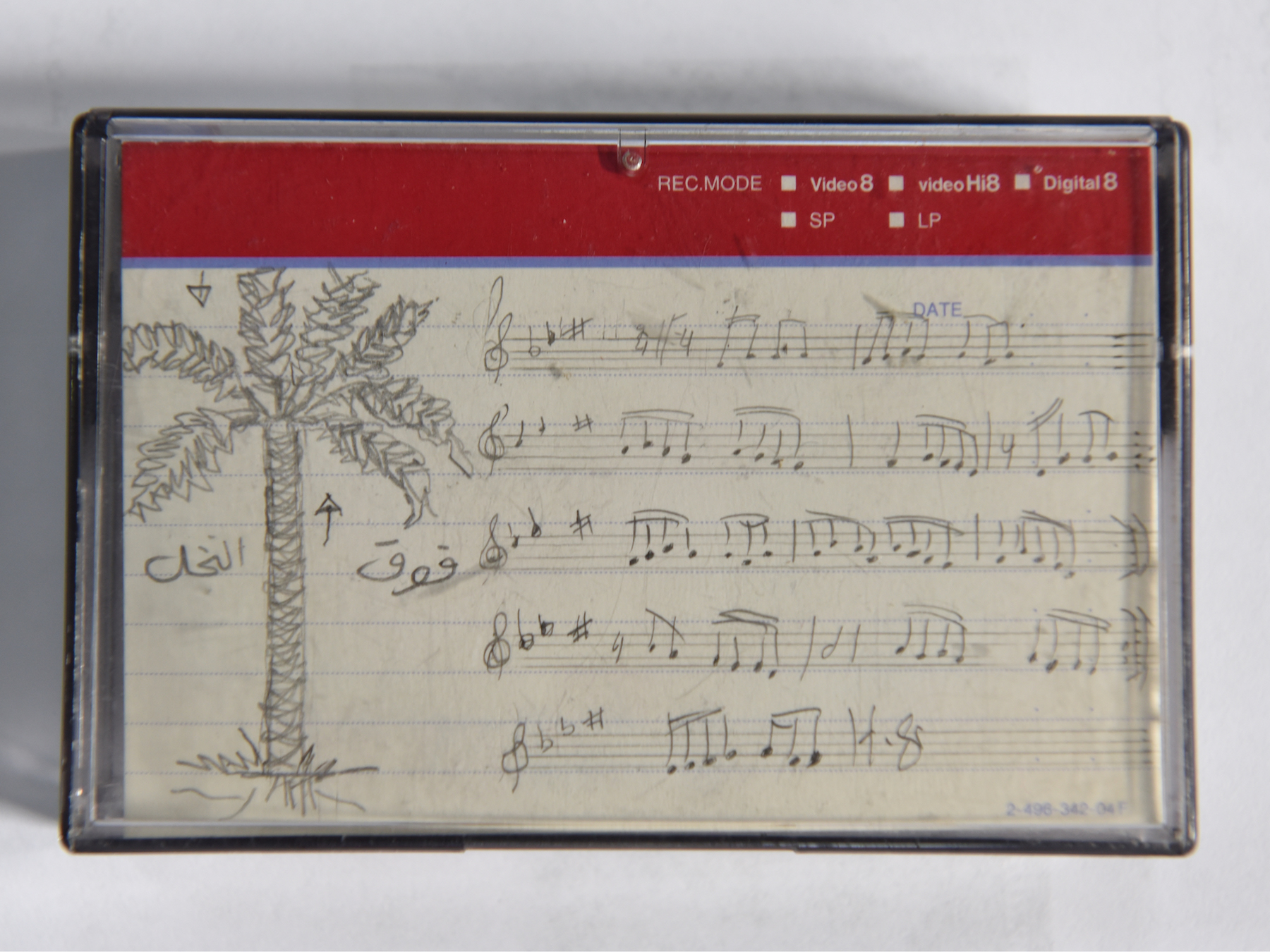 Why only artists?
In Iraq, we are politically divided, but culture is untouched by all these problems. I noticed this when I made a film about a cinema in Kirkuk in 2017. To this day, the Kurds, the Turcomen and the Arabs are fighting over the city. Yet the tensions between communities faded when people talked about their cinema. They talked together and made jokes about each other. Culture is the most fragile aspect of society in Iraq, but it’s also the most powerful.

You say that the concert was not about the music, but sending a political message. How do you distinguish this from your own work?
That’s a difficult question. My work is political but it does not have an ideological message. At least I don’t want it to have one. For example, the work questions the fragility of Iraq as a nation today, but I’m not saying that we should create a separate state for the Kurds. I am investigating and asking questions.

Do you think the concert changed your sister in any way?
I have never asked her. I don’t think it changed her musically, but she must have been affected by the journey. Two years later she emigrated to Sweden and now she is an avant-garde composer in Berlin.