The Baghdad-based artist Salam Atta Sabri has been selected to show his series of drawings ‘Letters from Baghdad’ (2005- 2015) at the first edition of the Kathmandu Triennale, in Kathmandu, Nepal. The Triennale is a major new art fair in Nepal, which brings together international and Nepalese artists in contemporary and historic venues across the cities of Kathmandu and Patan. This year’s edition is titled ‘The City, My Studio / The City, My Life,’ and the Triennale’s curator Philippe Van Cauteren, artistic director of S.M.A.K (Museum for Contemporary Art), Ghent, has invited artists whose work takes the city ‘as a catalyst […] a laboratory to generate gestures, acts, ideas; art works’.

Sabri’s drawings will be displayed in dialogue with the work of SC Suman, a Nepalese artist and textile designer, in the historic grounds of the Taragaon Museum, Kathmandu. ‘Letters from Baghdad’ (2005- 2015) is a visual diary of over 150 drawings that was first exhibited at ‘Invisible Beauty’ the Iraq Pavilion at the 56th Venice Biennale.The artist produced these drawings privately upon his return to Baghdad with his family in 2005. The series weaved together elements of Iraq’s modern art and ancient history, with the artist’s own personal journey and travels. Van Cauteren, who curated ‘Invisible Beauty’ in 2015, described the drawings as ‘introspective annotations where the tragic circumstances of a country collide with the personal drama of an artist who tries to satisfy the need to make art’. 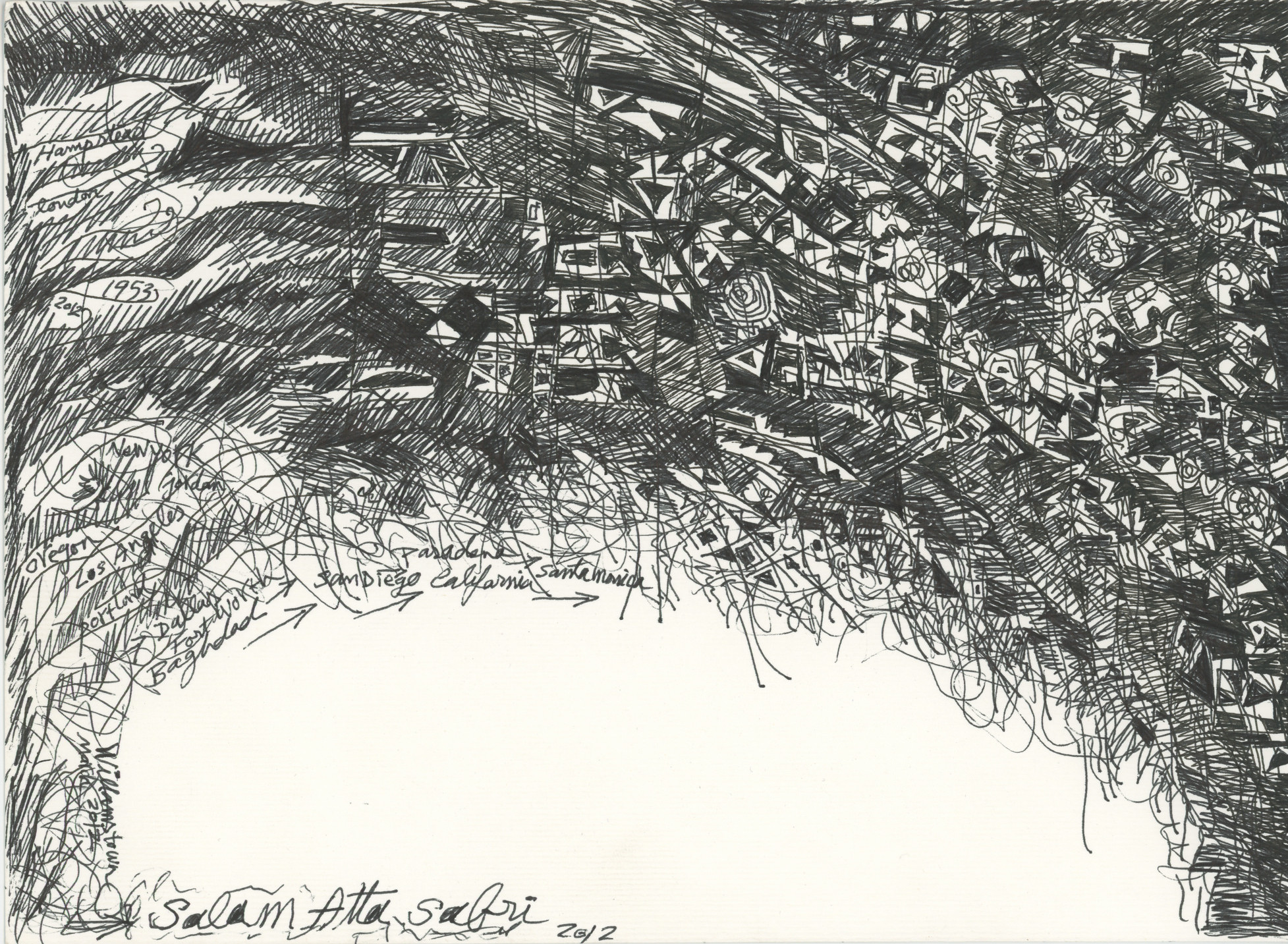 Salam Atta Sabri, from the series Letters from Baghdad, 2012-2015. Courtesy of the artist.

Sabri’s work deals directly with the experience of returning to a country so changed by conflict. In an recent series of drawings ‘Date Palm Killing Fields’ (2016), commissioned by the Ruya Foundation, the artist highlighted the destruction of Iraq’s date palm orchards, as a result of climate change, urbanisation and conflict. Since exhibiting his work with Ruya in Venice, Sabri has been invited to show work at major group shows including The Bottom Line (2015), S.M.A.K, Ghent, Alternativa Festival (2016) Gdansk, the 5th International Çanakkale Biennale, Çanakkale (2016).

At the Triennale, Sabri’s drawings will be shown alongside painted objects and works on paper by the Nepalese artist SC Suman. Suman is a self-taught artist, textile designer and a celebrated radio host in the city of Birathnagar Nepal. His work adopts the motifs and themes of the Mithila speaking people, living in the Terai regions of South Eastern Nepal. Traditionally, Mithila painting was an integral part of a woman’s domestic day-to-day life. They painted protective symbols on the walls of the house and fashioned images of Hindu Gods out of cow dung, mud and clay for worship. 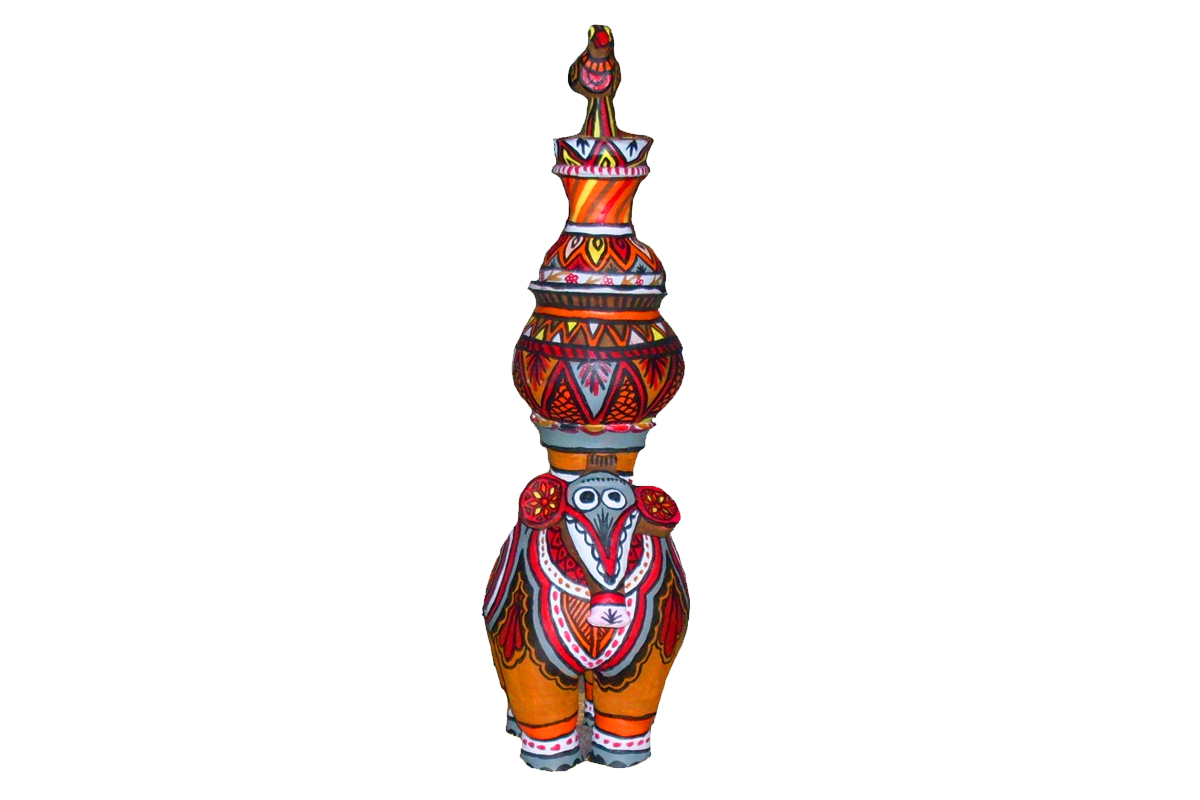 Suman learnt to paint by watching his own grandmother engage in these rituals. His work on paper and on objects made of clay incorporates images from the indigenous communities of the Terai region, using imagery from nature and tribal lore to also reflect on contemporary issues. His triptych Rebuild Nepal which is on display at the Triennale depicts the devastating effects of the earthquake that hit Nepal in 2015, as well as the relief provided by humanitarian aid workers.

Both artists refer to ancient civilisations in their work and Van Cauteren highlights further parallels related to the method of drawing and mark-making. ‘In the work of both artists, the entire paper has been written, drawn or painted on. This compulsive intention to use the paper till the end is described as horror vacui, or fear of the empty,’ he explains, ’Salam Atta Sabri externalises and gives free expression to his experiences and the living conditions of the city of Baghdad. Meanwhile, SC Suman uses the framework of traditional technique to give voice to an inward world that he inhabits.’

The works are exhibited at the Taragaon Museum in the Boddhanath district of Kathmandu. The former hostel and modernist housing project was designed and built in the 1970s by the architect Carl Pruscha. It served as a meeting point for foreign researchers and artists until its closure in 1991. In 2014, the building was restored and converted into a museum and cultural centre. It houses a collection of maps, photos and archaeological plans drawn by the first foreign architectural advisers to arrive in Kathmandu in the 1970s and a contemporary art gallery.

The Taragaon was built in the 1970s as a meeting point for artists and researchers. It reopened in 2014 as a museum and cultural centre. Photo: Carl Pruscha archive. 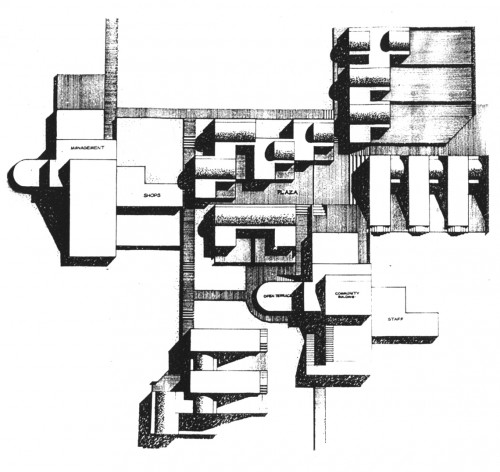 The Triennale is commissioned and organised by the Siddartha Arts Foundation and runs from 24 March – 9 April 2017.