Born and raised in Baghdad, Salam Atta Sabri (b.1953) trained as a ceramicist and lived in the USA and Jordan for 16 years. He returned to Baghdad in 2005, where he produced some 300 drawings between 2012 and 2015 that he has never shown in public. These intensely personal works exhibit the experience of an artist striving to create under the shadow of a crumbling arts infrastructure. One hundred of these drawings will go on display to the public for the first time at the National Pavilion of Iraq at 56th Venice Biennale. An audio extract of Ruya’s interview with the artist is available in Arabic.

What made you become an artist?
My father, Atta Sabri was an artist. The house was full of studio equipment and books. I’ve always been quiet, since a very early age. I’m not that talkative. I express myself through drawings, ceramics and sculpture.

What was the first artwork you ever admired as a child?
As a kid, I didn’t think there were other artists apart from my father. He raised me as a friend, and we were close. He taught me about Van Gogh and Goya. He took me to the movies and bought me music. I loved Sinatra and Swan Lake. He was my first school of art.

You studied in the USA and later moved to Jordan. How had Baghdad changed when you returned in 2005?
I had seen the sectarian violence on TV, but when I came back to my apartment on the 13th floor, it was such a bad experience for my two daughters, my wife and I. The military operations on the streets… we stayed in the bathroom for entire days. Luckily we could survive after this experience. I never feel sorry that I came back to Baghdad – never. I am so happy because I love Baghdad very much. Since my childhood wherever I go, I got the dream that Baghdad is something I can never leave. Baghdad has changed but the same dream of Baghdad – the same dreams of my youth and when I left are still the same Baghdad in my mind.

Was it a shock for your daughters to move back to Iraq?
Yes, they were born in Iraq but we moved to Jordan when they were 3 and 2 years old. They still do not understand why I came back. They keep blaming me. All my colleagues went back to America, I am the only one who came back.

Did your work as an artist change, when you came back?
I started painting and drawing more. I felt I had to do something for the culture, and accomplish something. I used the little wooden pencils that belong to my two daughters. 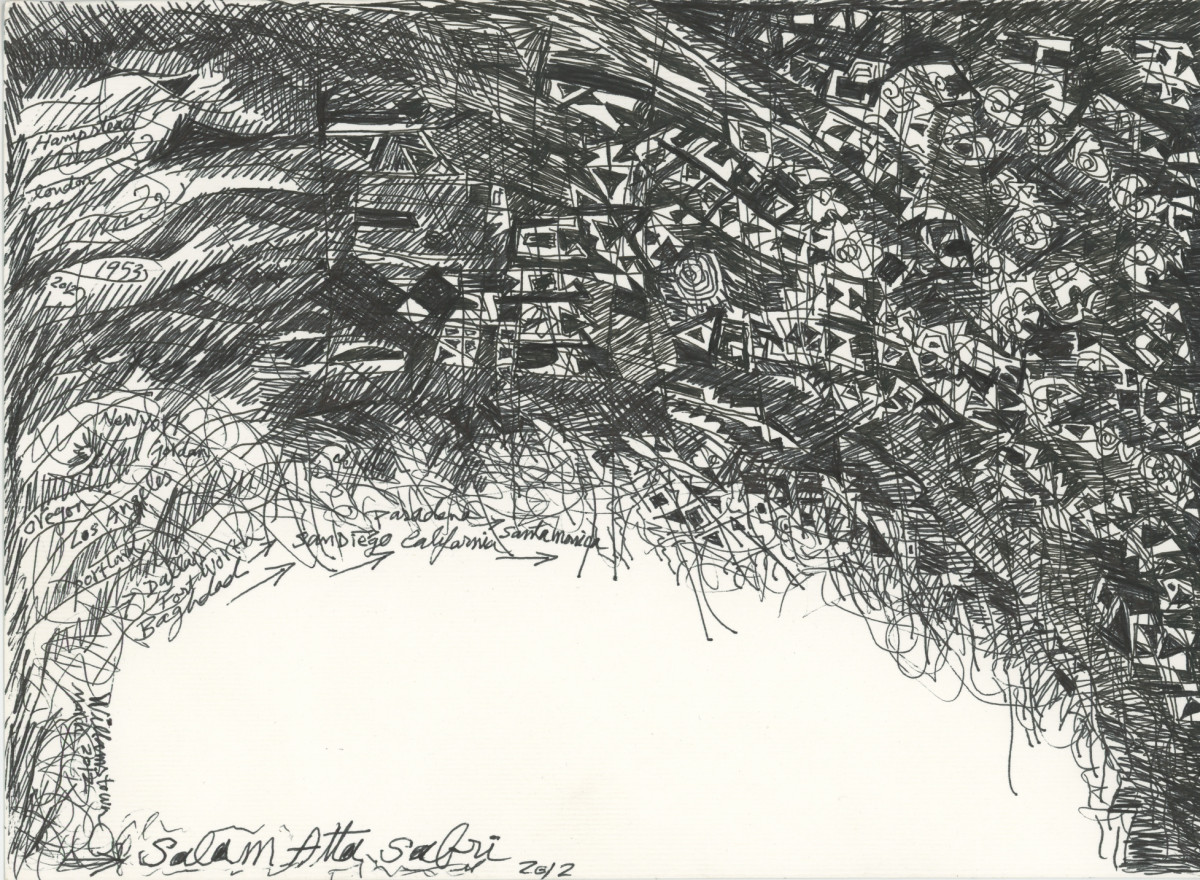 Salam Atta Sabri, from the series Letters from Baghdad, 2012-2015. Courtesy of the artist.

What place in Baghdad inspires you the most?

The Tigris river. It’s what brought the people here. Mesopotamia is famous for its two major rivers, the Tigris and the Euphrates. I am there on most Fridays. I live next door to al Mutannabi street, the book market next to the river that I call the Baker Street of Baghdad. I just cross the Shuhada bridge to get to the banks. I take my drawing pads, books and stay until noon.

What are your early memories of the river?
My mother took me to the river every afternoon. Baghdad in the 50s was different: fewer people, a lot of gardens, date palms and Chevrolets – I love Chevrolets.

What are the influences in Letters from Baghdad?
I got the title from the British archaeologist and civil servant Gertrude Bell, who was also founder of the Iraq Museum. She did a lot for the country. My wife works at the Museum. We always talk about Miss Bell and the early excavations by Max Mallowan, Agatha Christie’s husband.

How do you convey daily life in Letters from Baghdad?
Its a personal statement, memories, and my point of view of what’s happening in Iraq and Baghdad. I included symbols and the names of important people and cities: names from the modern history of Iraq, international artists like Paul Klee, even my professors and my instructors from California State University in L.A. My father taught King Faisal II to paint and draw from 1952-58. He always talked about it. There are many letters about the King, the royal palace and the massacre. It’s what I call the Golden Age of Iraq, the age of the Hashemite Royal Family of Iraq.

Who were the letters for?
The first to see and critique these drawings were my wife and two daughters. I kept them secret. I used English because I had a feeling they would be shown in the Western world. Its a message to the Western world about Baghdad.

When do you usually write these letters?
I carry my drawing pad wherever I go. There is no specific time. Baghdad is full of surprises and you cannot plan anything. If I get angry, I will write a letter. I won’t say anything, just use the ink on the drawing pad. My name, Salam, means peace. I prefer to be peaceful.

Why is it important to promote culture in Iraq?
You cannot rebuild Iraq without building a new culture. We have to take care of Baghdad’s heritage, its old houses and streets. These are our traditions and our history. We need art to rebuild the Iraqi personality, especially among the younger generation. The people have changed. After three major wars, they are hurt. We have to give them materials so they can express themselves like Ruya Foundation did in the refugee camps in 2014. They are the future of Iraq, it’s help.

Are you looking forward to Venice?
Yes. I was the saddest man in Baghdad. Now I’m the happiest, since Ruya supported my letters.