The Ruya Foundation is pleased to announce further details for the National Pavilion of Iraq at the 57th Venice Biennale in May 2017. The exhibition, ‘Archaic’, will show the work of eight Modern and contemporary Iraqi artists in dialogue with 40 ancient Iraqi artefacts drawn from the Iraq Museum and spanning six millennia, from the Neolithic Age to the Neo-Babylonian Period. Most of these objects have never left Iraq, excluding a few that were recently recovered after the 2003 lootings of the Museum. The exhibition will also be accompanied by a new commission by internationally acclaimed Belgian-born artist Francis Alÿs on the subject of war and the artist. ‘Archaic’ will be the third occasion on which the Ruya Foundation has commissioned the National Pavilion of Iraq at Venice. 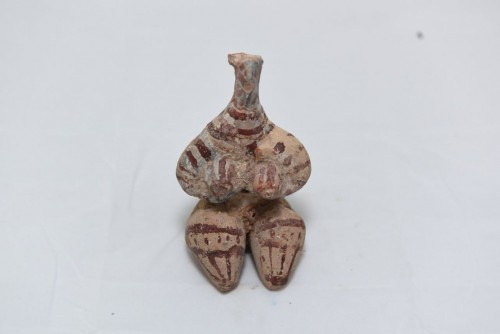 The tension in the term ‘Archaic’ is drawn from its multivalent references to the ancient and primordial, as well as what is currently out of use. The exhibition will draw out this tension to emphasise its particular relevance to Iraq, a country whose existing political, administrative, social and economic reality is arguably as ‘archaic’ as its ancient heritage. The exhibition will be co-curated by Tamara Chalabi (Chair and Co-Founder of the Ruya Foundation) and Paolo Colombo (Art Adviser at the Istanbul Museum of Modern Art). The curators have said:

“In exploring Iraq’s artistic heritage from the Neolithic Age to the present, ‘Archaic’ will also explore the different ways in which Iraq’s ancient past has affected its Modern and contemporary visual languages, examining the opportunities and restrictions presented to the nation by its immense ancient inheritance, in the context of today’s fragile reality.”

There will be 40 ancient objects on display, from as far back as the Halaf Period (6,100–5,100 BCE) and as far forward as the Neo-Babylonian Period (635–539 BCE). Artefacts in stone, glass and clay will incorporate cylinder and stamp seals, cuneiform tablets, medical objects, a musical instrument and figurines of animals, deities, people and boats, as well as everyday objects such as jugs, sieves and toys. A number of objects were returned to the Museum from the Netherlands via an Interpol directive in 2010. They include a Babylonian stone weight measure in the shape of a dove and an exquisite clay figurine depicting what is presumed to be a fertility goddess dating from around 5,000 BCE. The artefact selection was made by co-curator Tamara Chalabi in collaboration with Qais Hussein Rashid, the Director of the Department of Antiquities at the Iraq Museum, his team and archaeologist Lamia Gailani Werr.