Ruya has commissioned ‘Calling Calouste’, an exhibition of new Iraqi photography. The show will be held at the Ministry of Culture’s Gulbenkian Building in Baghdad that opens on 1 October. The exhibition, conceived by Ruya’s Iraq Director, Furat al Jamil, in close collaboration with the artists, brings together young, emerging and established photographers from across Iraq. 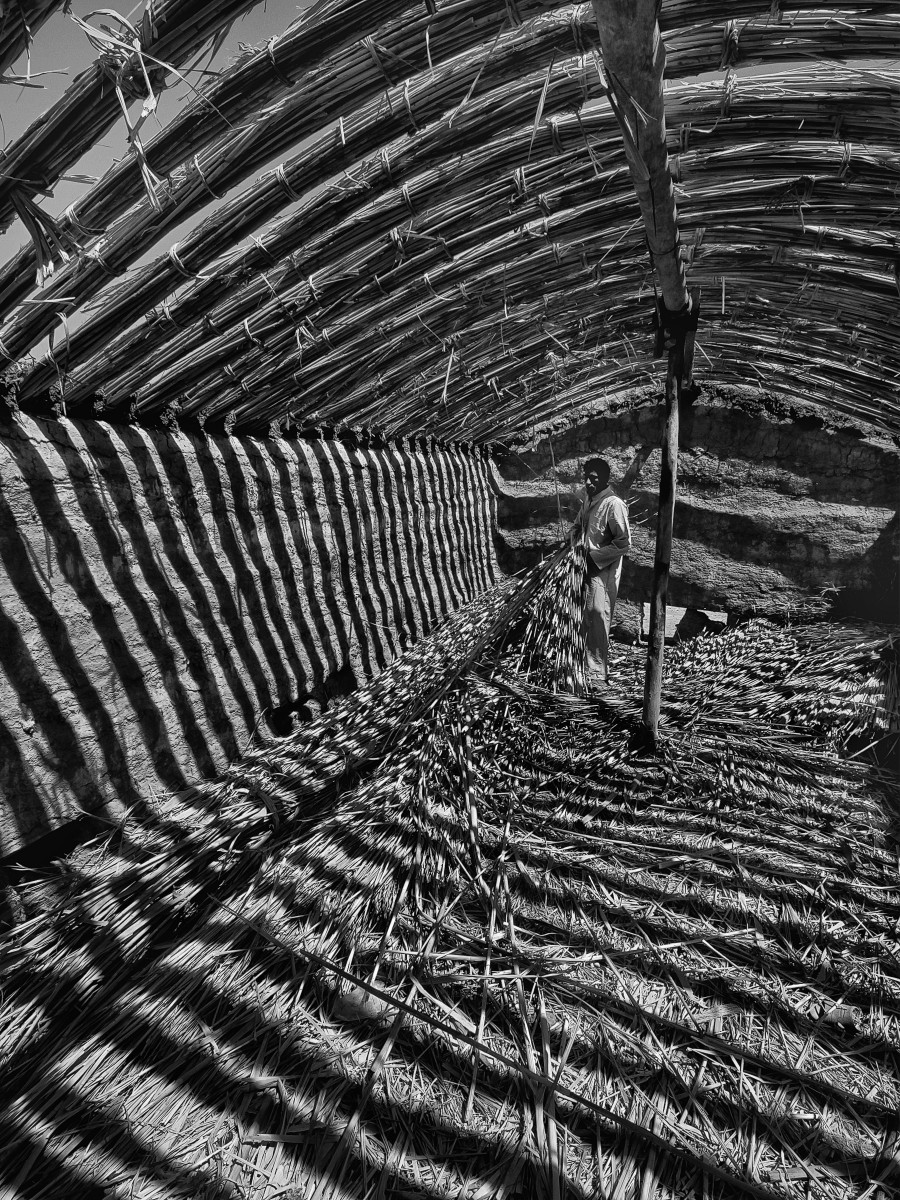 Muhanad Al Sudani, from the series The New South, 2016. Courtesy of the artist.

Photographs of current events in Iraq are widely published in the international media and online, and there are many well known Iraqi photojournalists. However this exhibition focuses on art photography projects, a growing field among photographers, photojournalists and artists in Iraq, that has had little exposure until recently. The title of the exhibition, ‘Calling Calouste’ is derived from the history of the Gulbenkian Building. It was designed in the 1950s, a time of major socio-economic development and modernisation in Iraq, to house the vast art collection of the Armenian businessman and philanthropist, Calouste Gulbenkian, who played a key role in developing the Iraqi Petroleum Company after the dismantling of the Ottoman Empire. Gulbenkian’s collection never made it to Iraq, due to his death in 1955 and the Revolution in 1958. However, the building is used today as an exhibition centre. ‘Calling Calouste’ is an attempt to recollect and reconnect with a different era in Iraq’s modern history, when Baghdad was envisioned as a cultural centre. 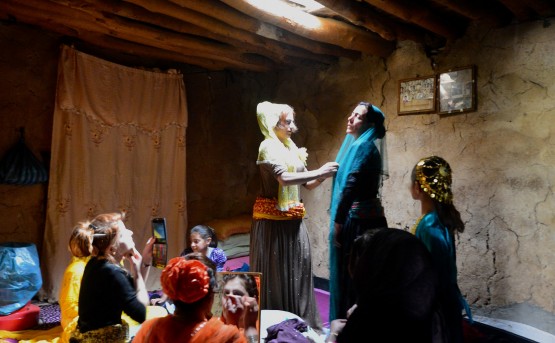 Kadhim Ali, from the series Life on the Side of the Mountain, 2016. Courtesy of the Artist. 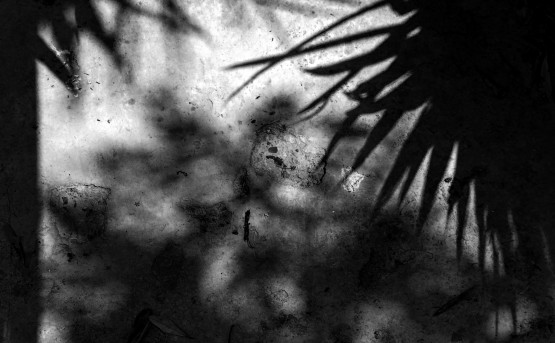 Mazin Mundhir, The Extent of Beauty, (2016). Courtesy of the artist. 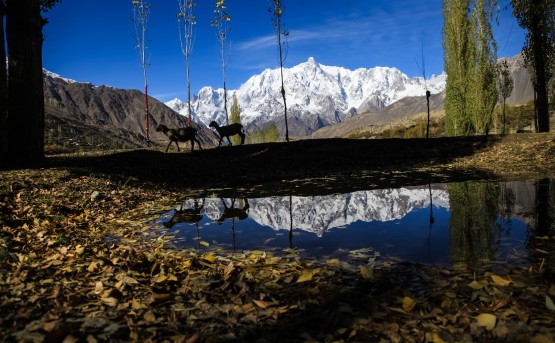 Bnar Sardar Sdiq, series taken during an assignment in Pakistan, October 2015. Courtesy of the artist. 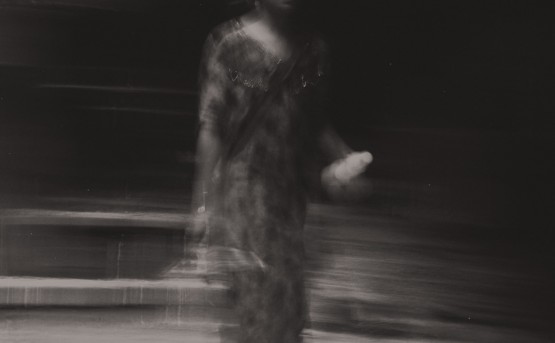 ZAid Al Obaidy, from the series Souls II (2016). Courtesy of the artist.

Ayman Al Amiri (b. 1995) works as a commercial and documentary photographer in Baghdad. His series Night Workers (2014), on street workers in Baghdad, was co-produced by Ruya. For ‘Calling Calouste’, Al-Amiri will exhibit a series titled Departure, shot around the railway station of Baghdad, an historically important building that at once echoes the city’s colonial past as well as capturing its emancipation and modernisation in the mid-20th century.

Bnar Sardar Sdiq (b. 1983) is a documentary photographer and photojournalist based in Sulaymaniyah. Sardar Sdiq documents the customs and rituals of Iraq’s diverse communities, from displaced Marsh Arabs living in northern Iraq and the Kurdistan region, to Sunni and Christians families who share homes in Kirkuk after fleeing IS. Her work has been featured in TIME, the BBC and Roads and Kingdoms among other publications. Taking a comparative approach for ‘Calling Calouste’, Sardar Sdiq will be exhibiting a new series of photographs showing the customs of people living in villages in northern Pakistan alongside a documentary series on daily life in the Iraqi marshes.

Hadi Al Najjar (b. 1957) is a well known and established photographer in Iraq and President of the Photographers’ Society in Baghdad. His recent work has focused on the destitute and marginalised communities living in the old districts of Baghdad, while highlighting the beauty of the area’s historic architecture, which is currently in a state of neglect. Al Najjar’s cinematic approach to photography is echoed in the title of the series which he has chosen to present at ‘Calling Calouste’ – Beyond the City Lights.

Kadhim Ali (b. 1977) is based in Sulaymaniyah and is known for his colourful portrayals of Kurdish culture and rituals, which reveal a deep relationship to the hilly landscapes of the Kurdistan Region of Iraq. His presentation at ‘Calling Calouste,’ titled Life on the Side of the Mountain is an attempt to document and preserve a rural way of life that is quickly being erroded by the fast-paced industrial development in the Kurdistan Region of Iraq. 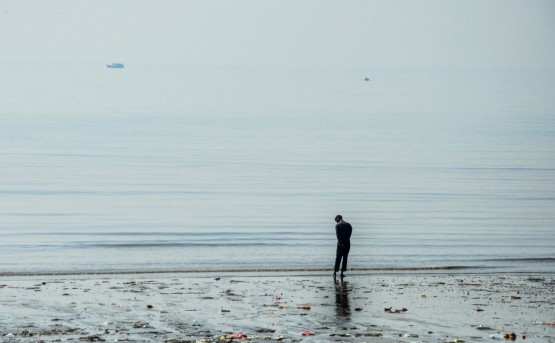 Tara Qadir, from the series Life, 2016. Courtesy of the artist. 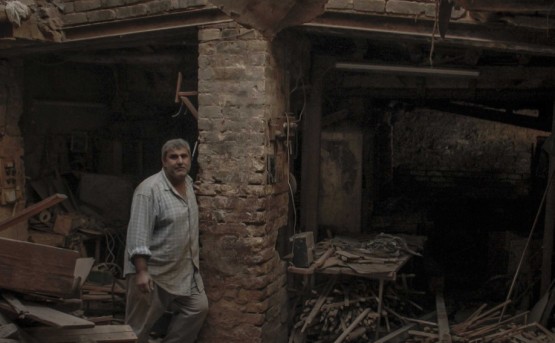 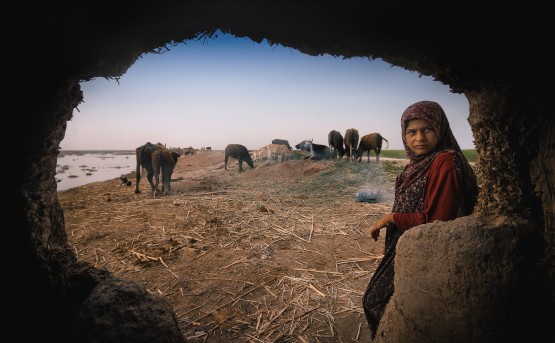 Muhanad Al Sudani, Girl of the Marshes from the series The New South, 2016. Courtesy of the artist. 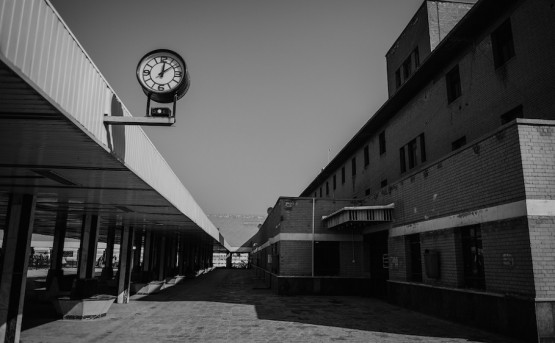 Mazin Mundhir (b. 1972) is a Baghdad-based photographer. Originally trained as a filmmaker and photographer at the College of Fine Arts in Baghdad, Mundhir’s recent photographic work for ‘Calling Calouste’, titled The Extent of Beauty, has taken a more conceptual turn, playing with light, shadow and found objects to create seemingly abstract compositions.

Based in Amara in Southern Iraq, Muhanad Al Sudani (b. 1987) draws on the natural setting outside his native city to create staged and dreamlike landscapes. An autodidact and member of several photography and film groups in Iraq, Al Sudani is well-known in these circles for the surrealist elements of his work. His presentation, titled The New South, presents his view of the Iraqi marshes, which were named a World Heritage Site by UNESCO in July 2016.

Trained as a computer scientist, Tara Qadir (b.1984) took up photography as a pastime and has since had several solo exhibitions in her native city of Sulaymaniyah. Her documentary work has a strong narrative voice, but she also experiments with staged photographs and photographic installations. Her series for ‘Calling Calouste,’ titled Life, portrays the different stages of life from birth to death in a set of portraits shot at a wide angle.

Zaid Al Obaidy (b. 1991) is a photographer from Mosul currently based in Baghdad. Focusing on human movement, light and change, Al Obaidy experiments with the exposure and digital renderings of photographs, to the extent that only the bare details of his subjects can be discerned. In doing so, he introduces the notions of time and speed into a medium that is more widely known for capturing moments. In the series Souls II, which Al Obaidy has selected for ‘Calling Calouste’, the movement of people, individually or in groups, free or forced, locally and internationally can be seen as an echo of displaced people in Iraq and around the world.