Rashad Salim is an Iraqi-German artist and designer based in London. His project, Ark Re-Imagined, aims to build a functional and floating vessel that re-imagines Noah’s Ark, using indigenous ancient boat making techniques. The artist has been working with local craftspeople across Southern Iraq in this project. In May 2016, Salim was awarded a grant from Ruya Foundation in order to continue his fieldwork in Iraq. The son of Nizar Salim a diplomat and artist, and nephew of the artist Jawad Salim, Rashad Salim moved to Iraq as a teenager and trained as a graphic designer at the Institute of Fine Arts in Baghdad. In 1976, he took part in the Norwegian adventurer Thor Heyerdahl’s Tigris expedition, travelling in a reed craft from the southern Marshes of Iraq to East Africa. He speaks to Ruya Foundation about his project, and the importance of preserving Iraq’s craft heritage and its two rivers. 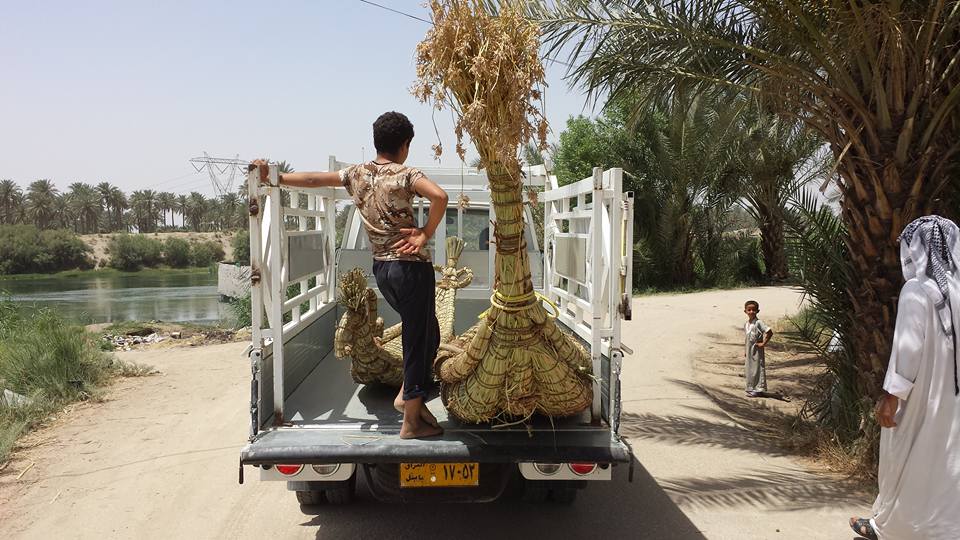 A reed boat or mashūf, built with the help of Marsh Arabs for the Ark Re-Imagined project. Hilla, Babylon, May 2016.

Myths and oral traditions are unreliable, often based on fantasy and can never be verified. Why are they still important for Iraqis today?
In Iraq, we don’t have much left except our myths. They tell us where we came from, what we are and patterns within them indicate where we are going. These myths stem from knowledge and real events in the experience and history of mankind. Geological studies, for example, of the land in Iraq and elsewhere reveal that a flood took place in our prehistory. Today we face Climate Chaos yet again.

You argue that the original Mesopotamian Ark was built as a gathering of different vessels available at the time of the flood. Why is this an important change to traditional narratives about the Ark?
Noah’s Ark is often depicted as a single vessel. My argument is that the ancient people wouldn’t have risked building an entirely new boat to save themselves. Instead, they could have used a combination of boats that had been tried and tested like the guffa (coracle), kalk (raft) and mashūf (reed boat). The gathering of coracles at the re-imagined ark’s hub (it is round) echoes an amulet known in Iraq as the saba’ ‘ayūn (seven eyes), where six circles of the same diameter surround a single one. These amulets are still given to children in Iraq today. Their ancient pattern appears in Mesopotamian and Islamic Arts, and has its roots in forms found in nature and physics. Thus, the original message of the Ark is one of unity and gathering. As Iraq is threatened with fragmentation, I want to explore this story. I want to initiate a creative and commonsensical conversation about the aggressive materialism in Western culture. This is a socially inclusive and collaborative public art project. 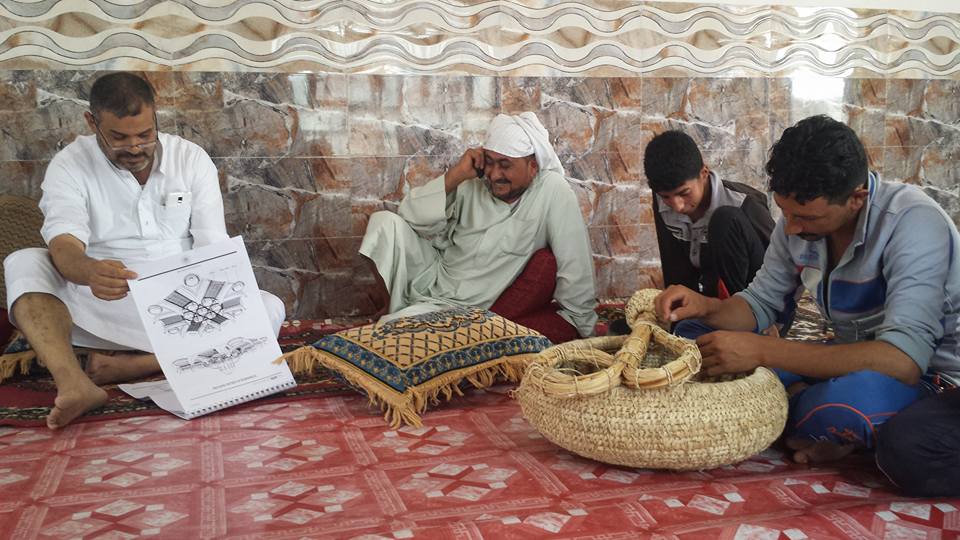 Salim is working with Marsh Arabs in Hilla, Babylon to produce his ark superstructure and vessels. Photo: Rashad Salim, May 2016. Courtesy of the artist. 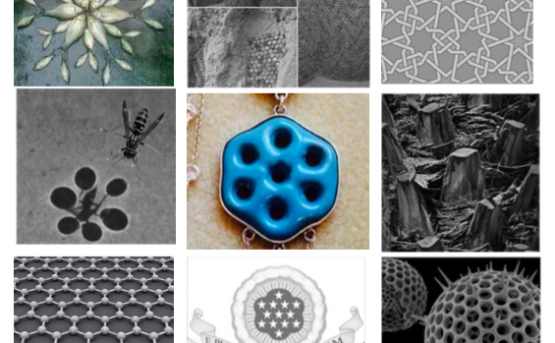 The saba’ ‘ayūn is a pattern found in nature, science and culture. Photo: Rashad Salim, 2016. 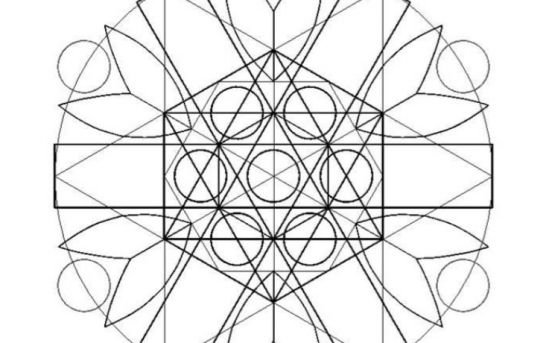 Salim’s drawings for the Ark, envisioned as a gathering of coracles and other ancient vessels including the mashūf (reed boat) and the kalk (raft). Photo: Rashad Salim, 2016. 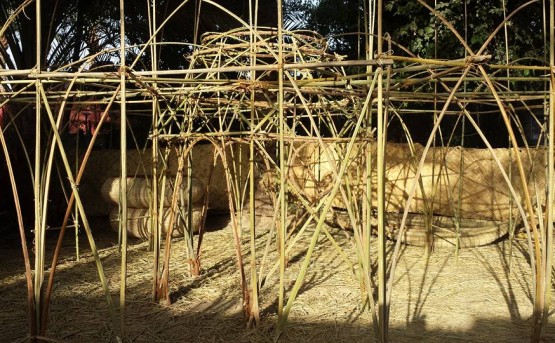 A prototype of the Ark’s superstructure which will accomodate a gathering of vessels. Hilla, Babylon, May 2016. Courtesy of the artist. 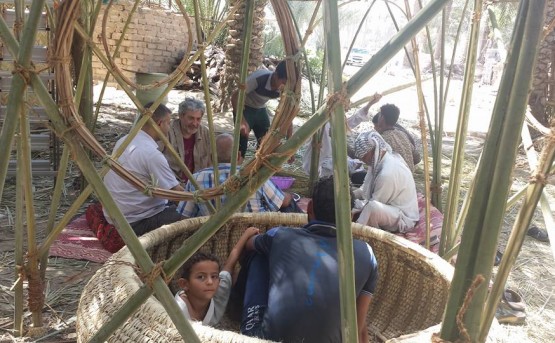 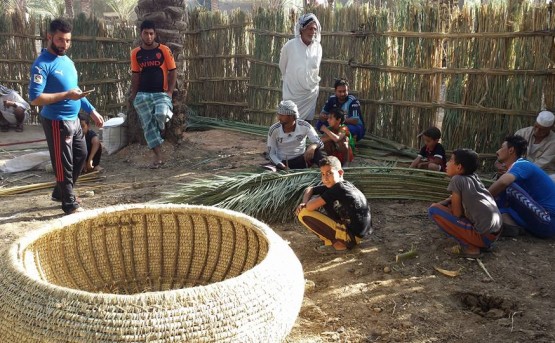 Green palm fronds are placed as a template to achieve the curve of the Ark. May 2016. 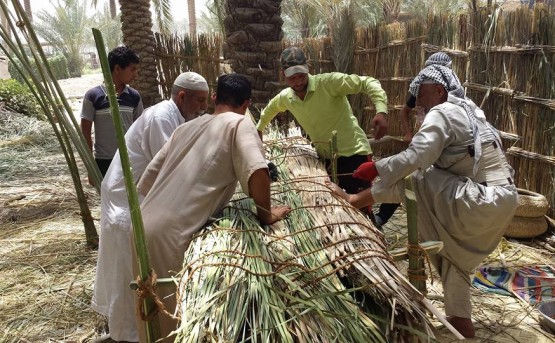 The making of a model reed boat. Hilla, Babylon, May 2016. Courtesy of the artist. 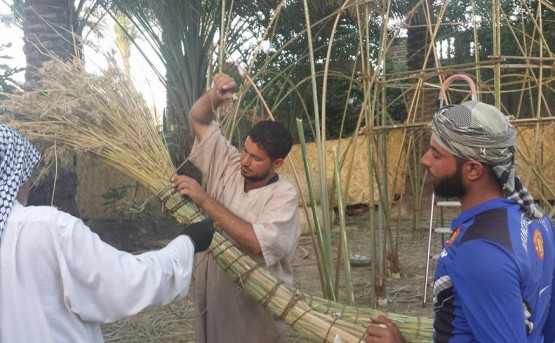 The making of a model reed boat. Hilla, Babylon, May 2016. Courtesy of the artist.

How will you build this ark?
I’ve been travelling across Iraq working with craftsmen and women to study different boat-making techniques. In Hilla reviving guffa-making and researching crafts in general and from palm trees in particular. In Ain al-Tamr, we have produced over three kilometres of handmade rope. The boat’s superstructure is being studied, models being built with displaced Marsh Arabs now living along the Hashimiyah river in Hamz al-Gharb. So far, we have built six of ten fishermen-sized guffas (1.6m diameter). I am now training a team towards producing 13 cargo guffas (4-5m diameter), which disappeared in the mid-20th century, when trucks and lorries were introduced in Iraq. On my most recent trip to Iraq in August 2016, we sourced and now have 5 barrels of tchidam a special bitumen tar used to waterproof guffa from the only known source in Hit, in the Anbar province which was under IS occupation and is still difficult to access. As well as these old techniques, I rely on research and common sense to make sure that the boats are functional and genuinely backed by Iraqi craft heritage and the logos of our environment and land. Conceptually the Ark Re-imagined’s and the recreated boat designs are derived from patterns inspired by nature like the saba’ ‘ayūn and curves of the palm crown.

How has your research into other craft traditions informed your work in Iraq?
I spent seven years in Morocco researching a Sufi brotherhood called the Gnawa, and six years in Yemen. In both countries, tradition is a part of the economy and daily life. In Morocco they have excelled at contemporary art and they keep developing and applying their traditional arts. They have well-known naive artists like Cha’ibiya. In Yemen, art isn’t distinct from daily life, it is lived in and experienced, through the architecture, household objects and their attire. In Iraq, we quickly abandoned our crafts for new technologies and these traditions have yet to be developed as or through art. Munim Furat is the only significant naive artist in Iraq’s modern art history. He was a shepherd who became a sculptor after seeing the Sumerian sculptures at the Iraq Museum. 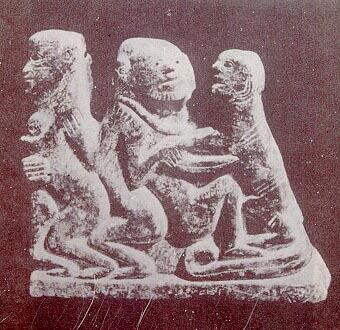 Why do you think craft traditions are fragile today in Iraq?
Crafts are an ancient and seminal part of our cultural heritage, but nobody in Iraq today, including UNESCO is trying to actively engage with and preserve them. The focus is on archaeology and our empires. Before the invasion in 2003, government institutions as well as a broad amateur-base supported our crafts with initiatives like turāth al sha’bi (Folk Heritage), a journal of Iraqi anthropologists. The government institutions were gutted and undermined after 2003. The Institute for Folk Art and Craft in Baghdad does not employ a single crafts person. Its teachers are students of art, who paint images of our crafts, heritage and culture, but do not make much. They paint shanāshīl, wooden oriel windows found on old Iraqi houses, while they are being destroyed. Industrial technological advances peaking in the 1950s contributed to the loss of a lived craft heritage: we no longer use rivers to travel and transport goods, but the road. During the sanctions period, the Marsh Arabs were displaced and forced to abandon their traditional way of life. However, some crafts such as ceramics were revived during the sanctions out of necessity. The‘iẓār rugs in Southern Iraq (pictured above) was one of the few things that women could sell to make money. They smuggled heirloom and new pieces to Jordan and Syria where they were sold for a pittance. In my opinion, the political climate after 2003 further damaged our craft traditions. It became easy to import products into Iraq, but difficult to export. Products that originate in Iraq are now made in China, because local businessmen find this easy, cheap and quickly profitable. Even public sculptures commissioned by local municipalities are sometimes wholly produced in China. 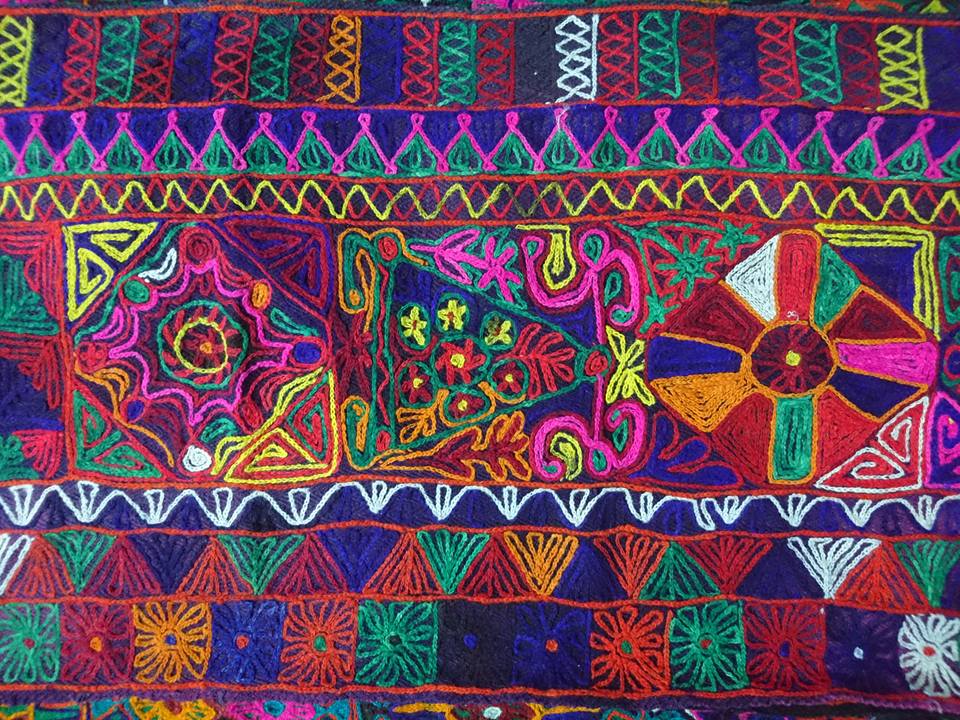 Salim has been working with a cooperative in Samawa which teaches women the ‘iẓār rug-making technique that is typical to Southern Iraq. Photo: Rashad Salim, 2016. 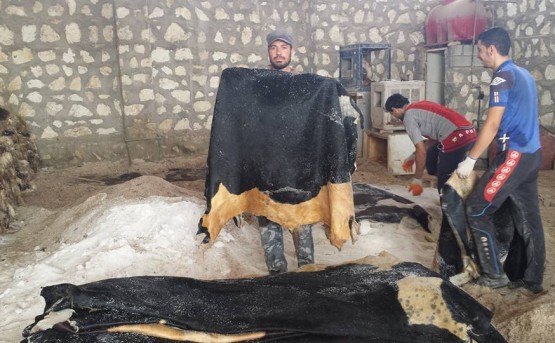 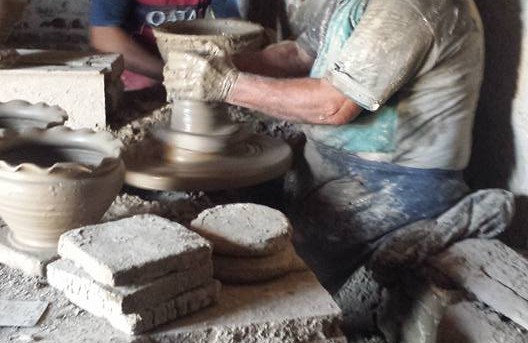 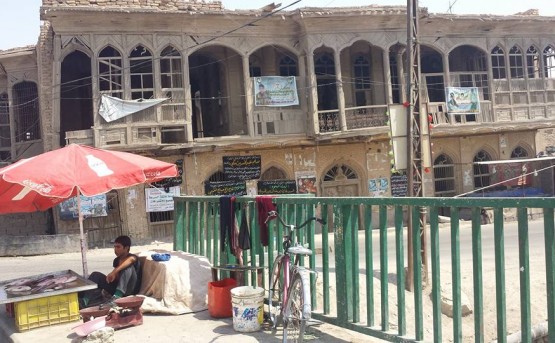 Shanāshīl in the South of Iraq 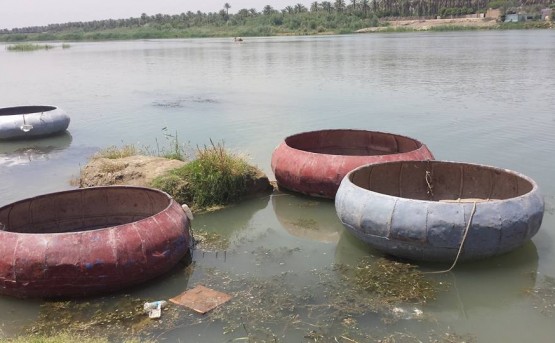 Today, the traditional guffa is made of metal, as it is cheaper and easier to produce than with a coil basket weave. Sedet al Hindiya, Hilla. Photo: Rashad Salim, 2016.

Do these crafts still have a utility for those who make them in Iraq?
Yes, everywhere. We haven’t lost all our traditions. A lot has been degraded, some are lost forever, others recoverable and we are in the process of losing the environment that these crafts link our culture to. Basic basketry still exists today like the ḥassīra, mats. Hand-made rope and cordage is in the process of being lost.Academics and documentary makers say that coil basket guffa have not been made since the 1970s, but in 2013, I found a woman in Babil who had made the last one for the purpose of fishing in 2003. 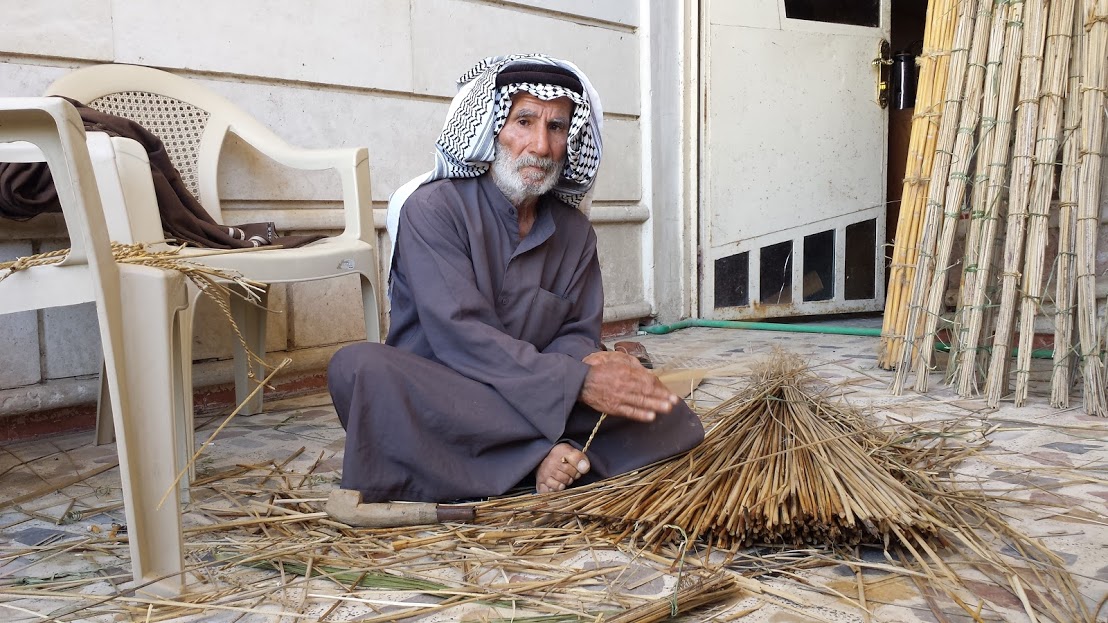 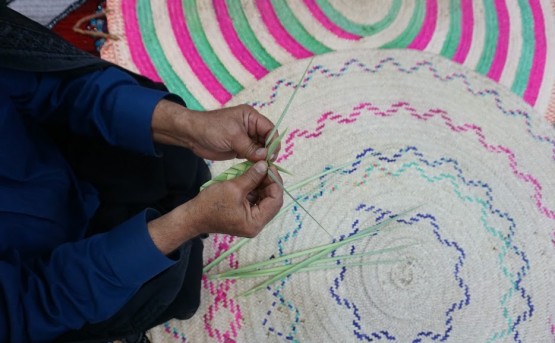 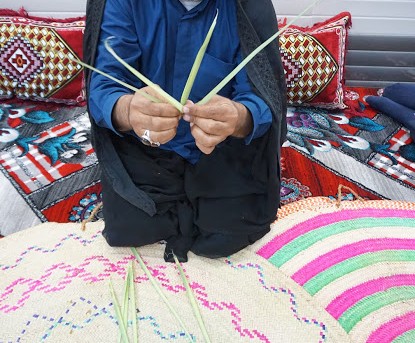 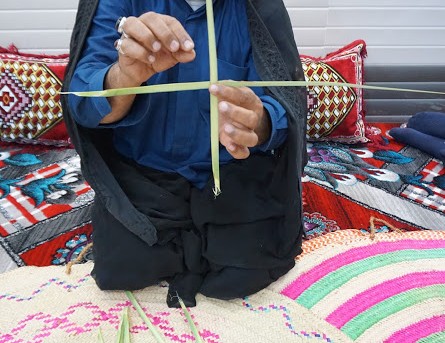 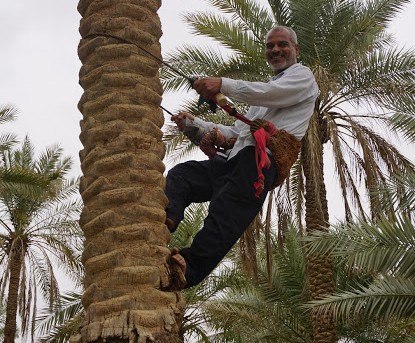 When technological advances make craft traditions obsolete, why should we bother saving them?
Our ability to make things is far older than our documentation of it. In Iraq, some of these crafts have existed without a break since pre-history. They have survived different kingdoms, cultures and movements. I’m not saying people should make traditional coracles out of coil if they can make cheaper and lighter ones out of metal. However there is a beauty and self-reliance in the original ones that the new metal ones don’t have. These crafts developed out of a creative intelligence, and a direct engagement with the environment. The Iraqi palm tree, for example, is like the American buffalo to the Indians – they use every bit of it. It has its own lexicon of different qualities. We’ve got hundreds of varieties, each with a different specialty. The second cut of the trees fronds, known as the karab is still used today to teach children how to swim because it floats in water. I discovered that these fronds were once used as shoe soles. This could help solve the environmental problems caused by shoe sole plastics. Perhaps even Noah wore shoes made of karab. 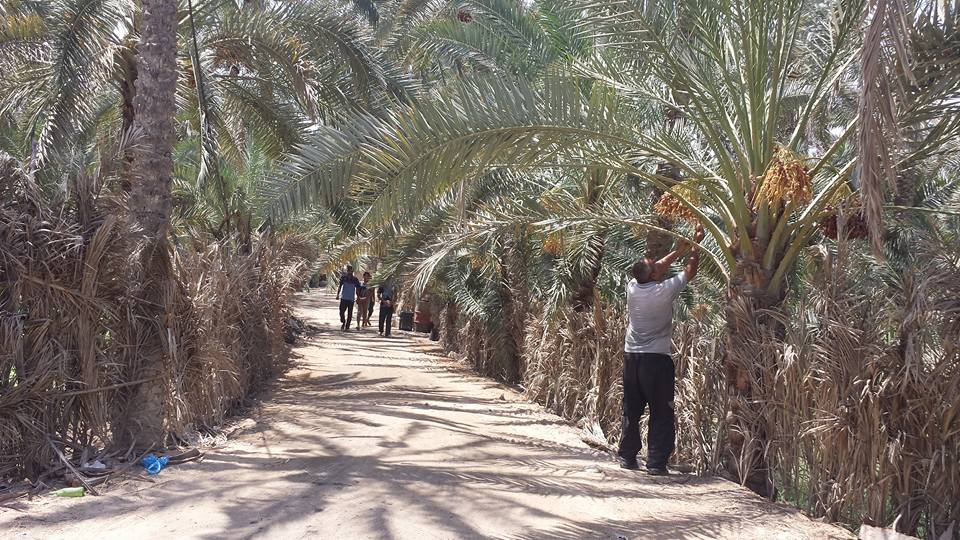 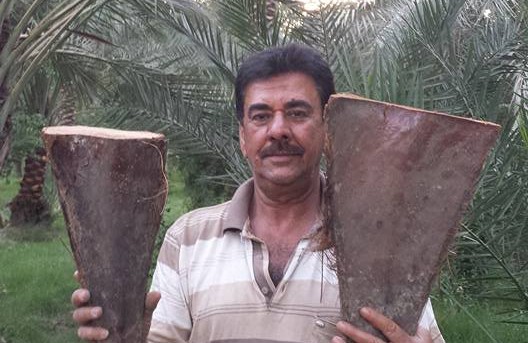 The karab is the second cut of the palm tree frond. Today it is still used to teach children how to swim. Photo: Rashad Salim, 2016. 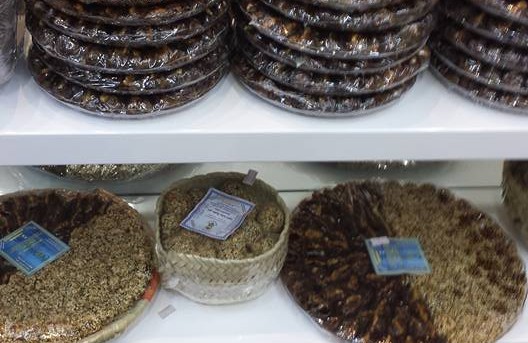 Dates are sold as souvenirs and treats from Iraq at Baghdad International Airport. Iraq was once the leading dates producer in the world. Photo: Rashad Salim, 2016. 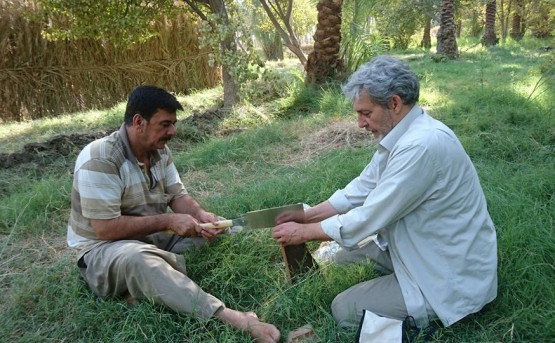 In 2013, you travelled from Southeast Turkey to the Iraqi marshes in a coracle. How had Iraq changed since you last journeyed across the country in the 1970s?
For security reasons we completed the expedition in stages. We skipped Mosul and parts of Baghdad. Certain things hadn’t changed in Iraq: the manner of the people, their hospitality, their unity – the people we met were not sectarian. Yet every area had signs of the Iran-Iraq war, the sanctions and the post-occupation period. People’s lifestyles have degraded as has the ecological environment. The river itself is polluted, narrower, shallower and murkier. For the first time in Iraq’s history the Euphrates doesn’t reach the Shatt al-Arab, and is now diverted to reflood the marshes. The water crisis was visible everywhere. In the Bible, the Tigris and Euphrates not reaching the sea is a prophecy that the “End is Nigh”. 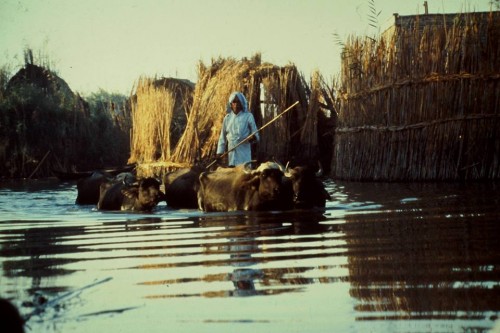 What do you hope your project will achieve?
I aim to open a window for re-engaging with Iraq’s traditional crafts, its environment, and its rivers. I want to give audiences who have never been to Iraq, including Iraqis from the diaspora, the chance to participate in and experience something made in Iraq, and that is tangibly and absolutely Iraqi. Reviving these crafts can help us solve unemployment problems in Iraq, and contribute to our potential tourist industry. I can even picture floating river restaurants in Baghdad, based on gathered guffa… that would be fun and beautiful to see.

The Ark Re-Imagined is a not-for-profit project currently supported by Zein Al Abedin Al Tamimi, Musa al Musa and Ruya Foundation. It is managed by Abu Tiba in Iraq. All opinions expressed in this interview are strictly those of the artist’s.