RUYA hosted a talk on art in Iraq at Art Dubai last week, to announce the artists selected for the National Pavilion of Iraq at the 56th Venice Biennale and as well as shed light on the state of the arts in Iraq today.

Curator Philippe Van Cauteren introduced the theme of this year’s Pavilion, Invisible Beauty. The theme reflects on unusual or unexpected elements in the selected artists’ work, as well as the invisibility of Iraqi artists on the international stage. 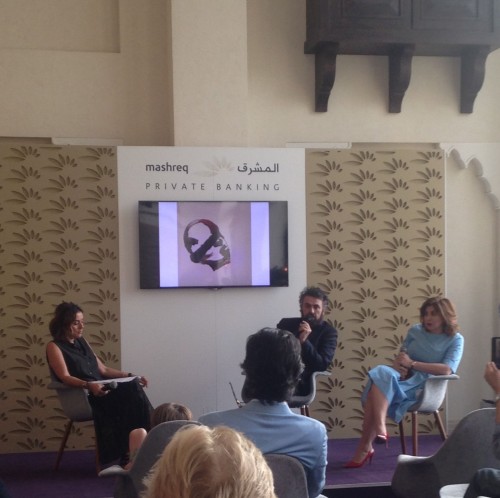 “Seeing the conditions of the city of Baghdad, and its institutions, we had to approach the notion of contemporary art differently,” he explained.

All of these artists, he argues, “take a position on their own identity, through documenting, creating inventories or stocking up experiences together”.

“Last year we focused on artists from inside Iraq,” said Reem Shather-Kubba, “this year we want to create a dialogue between artists in Iraq and the diaspora.”

When asked about his trip to Iraq, Van Cauteren described it as a “reality check”. “As a curator,” he explained, “it grounds you and makes you reflect on what art means and should be”.

Van Cauteren hopes to curate an exhibition of international artists in Baghdad in the near future, as part of RUYA’s mission to build cultural bridges between Iraq and the world.

RUYA co-founders Reem Shather-Kubba, Tamara Chalabi and Shwan Taha spoke about the impact and challenges of supporting the arts from within Iraq.

As well as the logistical problems, such as transporting works or securing visas for curators and the artists, they explained that the cultural scene is still recovering from decades of conflict and trauma.

Highlighting the effects of an art scene that was largely state-driven until now, Tamara Chalabi said, “Art is a form of self-expression, but often, artists in Iraq do not do that. They are preoccupied with form and color, there is an implicit and often unconscious self censorship ”.

This became apparent during RUYA’s studio visits in Baghdad, where Philippe met and mentored artists, including those not selected for the Biennale.

Chalabi also displayed examples of street art, such as murals on blast walls and other attempts to beautify the city of Baghdad.

RUYA also announced their collaboration with Ai Weiwei on a major publication, Traces of Survival: Drawings by Refugees in Iraq Selected by Ai Weiwei. In December 2014 Ruya launched a campaign to provide drawing materials to adult men and women in refugee camps in northern Iraq. All 546 submissions, including drawings, poetry and prose, will go on display at the Pavilion and the publication will launch at the Biennale.