With support from the Ruya Foundation, Baghdad-based artist Furat al Jamil, and Iraqi-born Hayv Kahraman are taking part in Neighbours, a new exhibition at Istanbul Modern, the city’s museum of modern art.

To celebrate its 10th anniversary this year, Istanbul Modern will showcase contemporary art from Turkey and the surrounding regions, including the Middle East, the Balkans and the Caucasus. This is a great opportunity to see the work of two living Iraqi artists alongside contemporaries from neighbouring countries.

Based in Oakland, California, the Baghdad born painter Hayv Kahraman– shortlisted for the Victoria and Albert Museum‘s 2011 Jameel Prize -will be exhibiting her series Waraq, executed in 2010. These still and haunting wood panels take the form of playing cards, evoking a popular Iraqi pastime. Her polished and meticulous painting technique, and her meditative figures are reminiscent of Islamic miniatures.
Like al Jamil’s work, Kahraman draws on the country’s ancient traditions, here craft and ornamentation, to reflect on issues affecting modern day Iraq. The paintings of the Waraq series, numbered and titled Immigrant, explore the theme of trauma and loss.

Hayv Kahraman, Migrant 4, 2010. from the Waraq series. Courtesy of the artist.

Hayv Kahraman, Migrant 8, 2010. from the Waraq series. Courtesy of the artist.

Furat al Jamil will be screening her animated film Baghdad Night, which premiered at the Dubai International Film Festival last month, and was produced by the Ruya Foundation. Baghdad Night tells the story of a taxi driver’s encounter with Saluwa, a beautiful seductress and stock charater of the Arabian Nights, known to lead men to their downfall. Furat, who heard the fairy tale from her grandmother, sets the story in the Qambar Ali district of Baghdad, where her family is from, weaving ancient folkore into an urban setting.

Still from Baghdad Night, 2013. Courtesy of the artist

Still from Baghdad Night, 2013. Courtesy of the artist 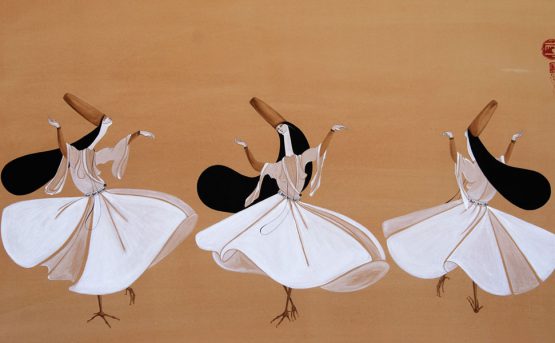 At the opening of Neighbours, a new exhibition at Istanbul Modern, we asked Iraqi artists Furat al Jamil and Hayv Kahraman to talk about experiences that affected their work. FaJ: Where did everything start? How did you come to be painting on wood? HK: My first works were on brown paper. The tone of the…