Serwan Baran’s The Last General (2019), a new commission unveiled at the Iraq Pavilion at the Venice Biennale, depicts the corpse of an army general floating on a reed boat. As visitors enter the Pavilion’s first room they stumble on the clay and resin sculpture. The general’s body appears rested, but his head drops backwards, revealing hollow eye-sockets and gaping teeth and jaw-bone. 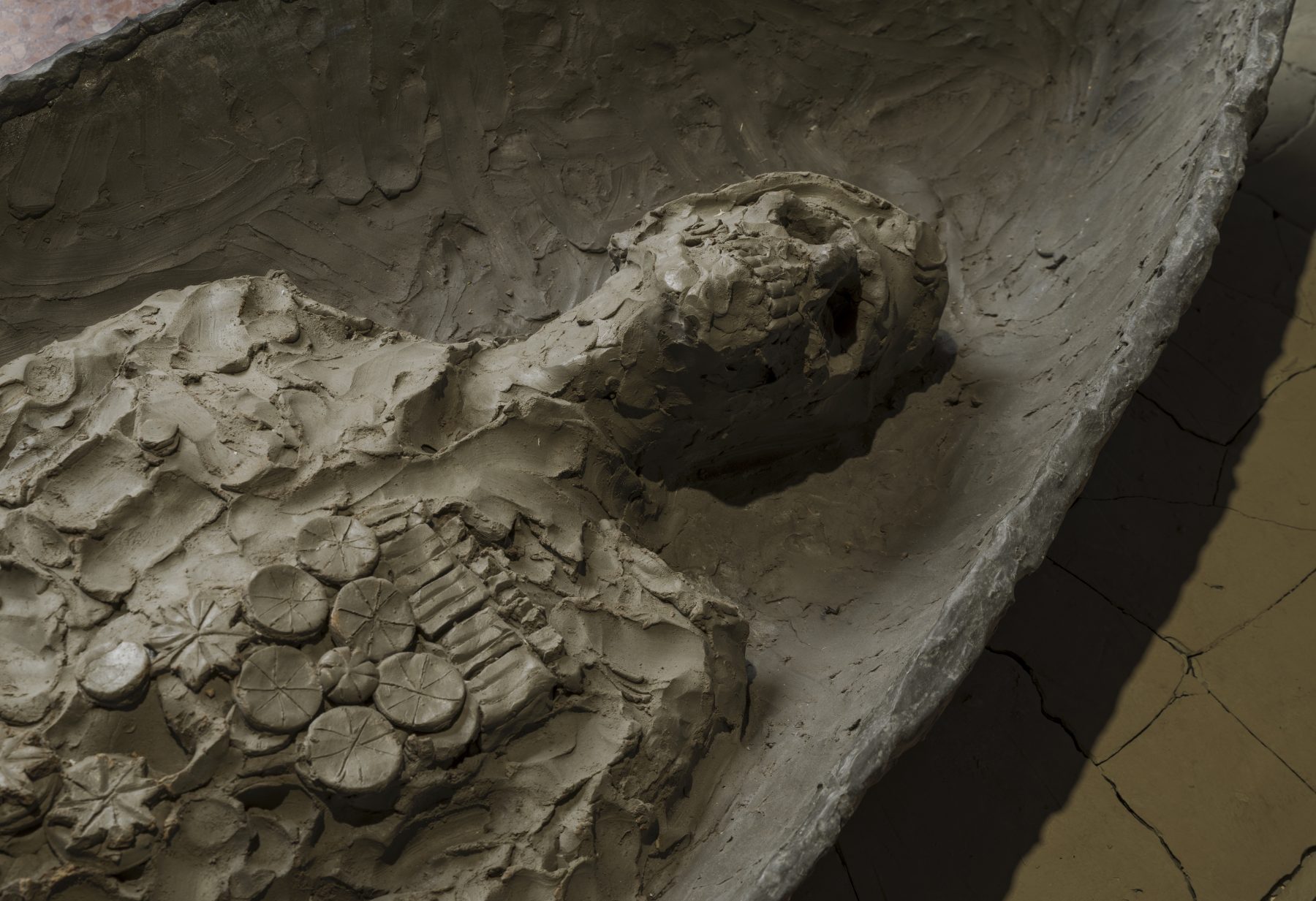 Boats, rivers and seafaring have an important presence in Iraq’s cultural history. The rivers of the Tigris and the Euphrates appear in ancient and biblical narratives, and contributed to the growth of Iraq’s major littoral cities. The Marsh Arabs of southern Iraq have adapted to a life surrounded by water over centuries. On the Persian Gulf, the port of Basra was a historically important hub, and the home of Sindbad the Sailor from the One Thousand and One Nights.

The Last General draws on this history to describe Iraq’s wars. The work references Sumerian burial rituals, in which the deceased’s body is placed on a boat and put out to sea. The vessels carried the body into the afterlife, thus evading death. Baran uses the Sumerian understanding of mortality to comment on his own experiences as a soldier in the Iraqi army. “High ranking army generals often bypass imprisonment and are less exposed to death than soldiers. I imagined a general who escapes on a lifeboat, but drowns in the process,” he explains. 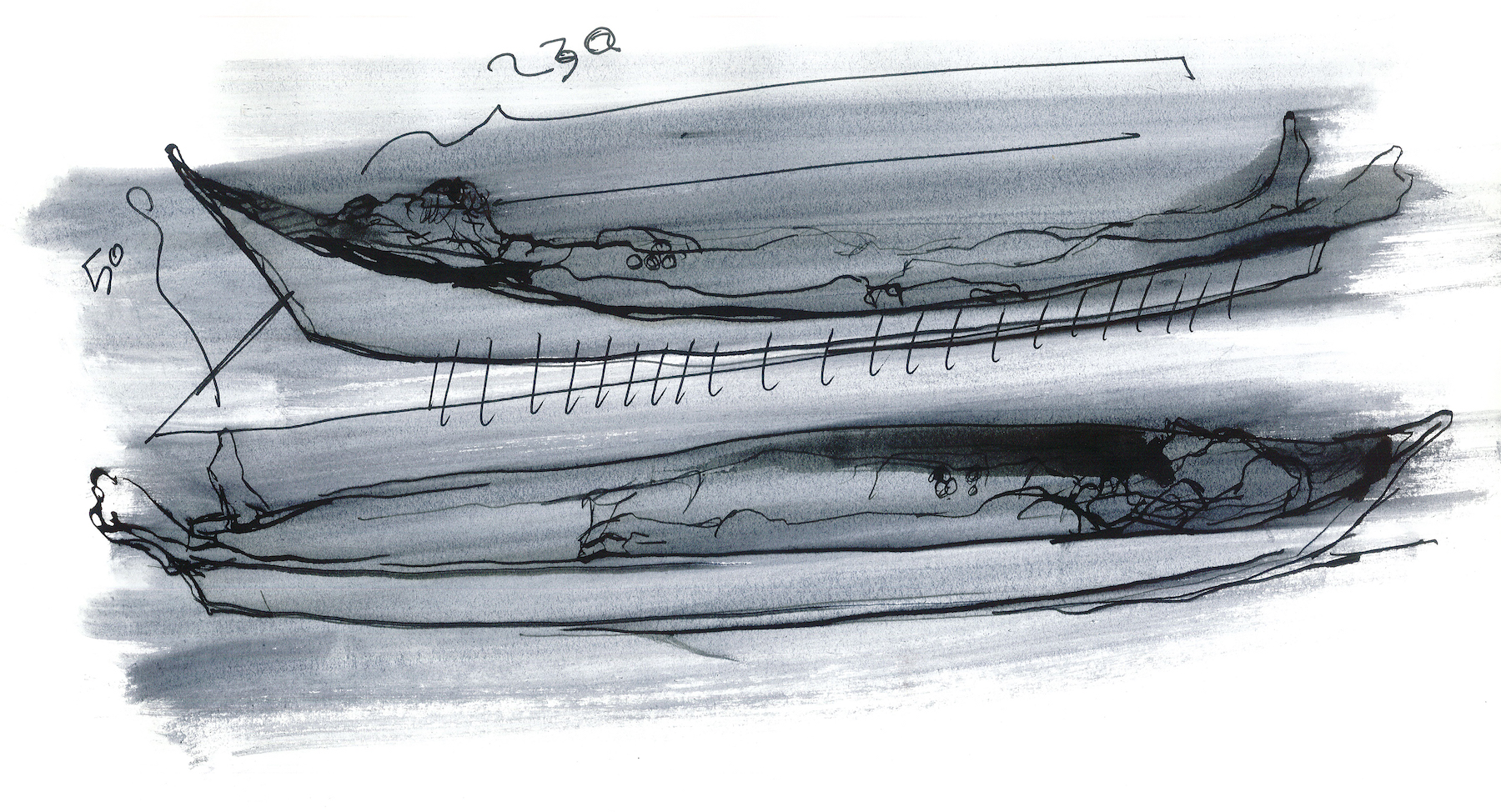 Yet in Baran’s sculpture, the general’s boat journey does not resemble a protective passage into the afterlife, as the Sumerians believed, but a crossing into Hell. “He lies in the boat partially decomposed like a mummy in a sarcophagus and his army decorations are still visible,” says Baran. It is a visceral, living damnation that is eternalised in sculpture. 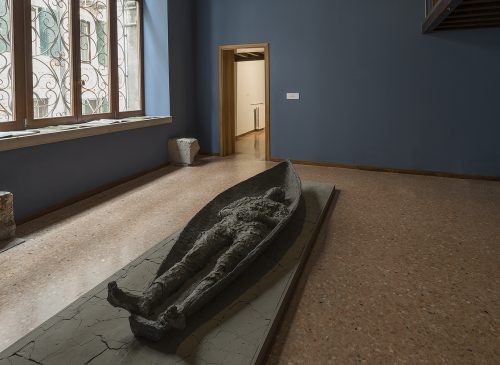 The image of a boat crossing to Hell has its origins in Greek and Egyptian mythology, and is a recurring trope in literature, art and film. It has been adapted to portrayals of modern warfare in order to explore the nature of evil and suffering. In the list below, Ruya explores this recurring image in parallel to Baran’s The Last General.

The Italian poet Dante Alighieri’s imagines a crossing through Hell in his epic The Divine Comedy. Drawing on Greek mythology and Christianity, Dante is ferried on a boat through the river of Acheron, which today runs through northwestern Greece, down to the marshes of Styx, which some historians believe was the Egyptian Nile. The poet’s portrayal of Hell, with its depraved bodies wrestling on the muddied banks of the marshes, living dead drowning in deep water, and damned cities engulfed in flames, reappears in modern portrayals of warfare. 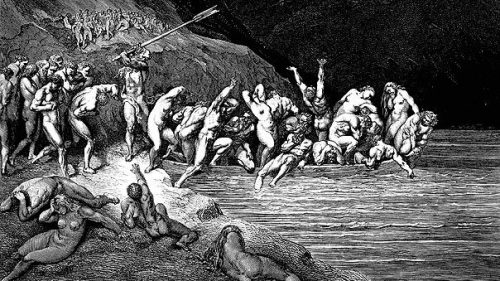 And lo! towards us coming in a boat
An old man, hoary with the hair of eld,
Crying: “Woe unto you, ye souls depraved!
Hope nevermore to look upon the heavens;
I come to lead you to the other shore,
To the eternal shades in heat and frost. (Extract from Canto III)

And I, who stood intent upon beholding,
Saw people mud-besprent in that lagoon,
All of them naked and with angry look.
They smote each other not alone with hands,
But with the head and with the breast and feet,
Tearing each other piecemeal with their teeth.
[…]
Beneath the water people are who sigh
And make this water bubble at the surface,
As the eye tells thee wheresoe’er it turns. (Extract from Canto VII)

Eugene Delacroix’s The Barque of Dante (1822)

Delacroix depicts Dante’s crossing through the waters surrounding the infernal city of Dis, known as the City of the Dead. He is accompanied by his guide Virgil, and the boat’s pilot Phlegyas. The souls of the damned writhe in the water, trying to escape their fate by hanging onto the boat. While the painting is not explicitly about war, the work gives special attention to the portrayal of human suffering, and in the background, the city of Dis stands in flames. The work is part of a wider genre of maritime painting, popular in the 18th century, which depicted the naval battles and colonial conquests among the powers of the period. 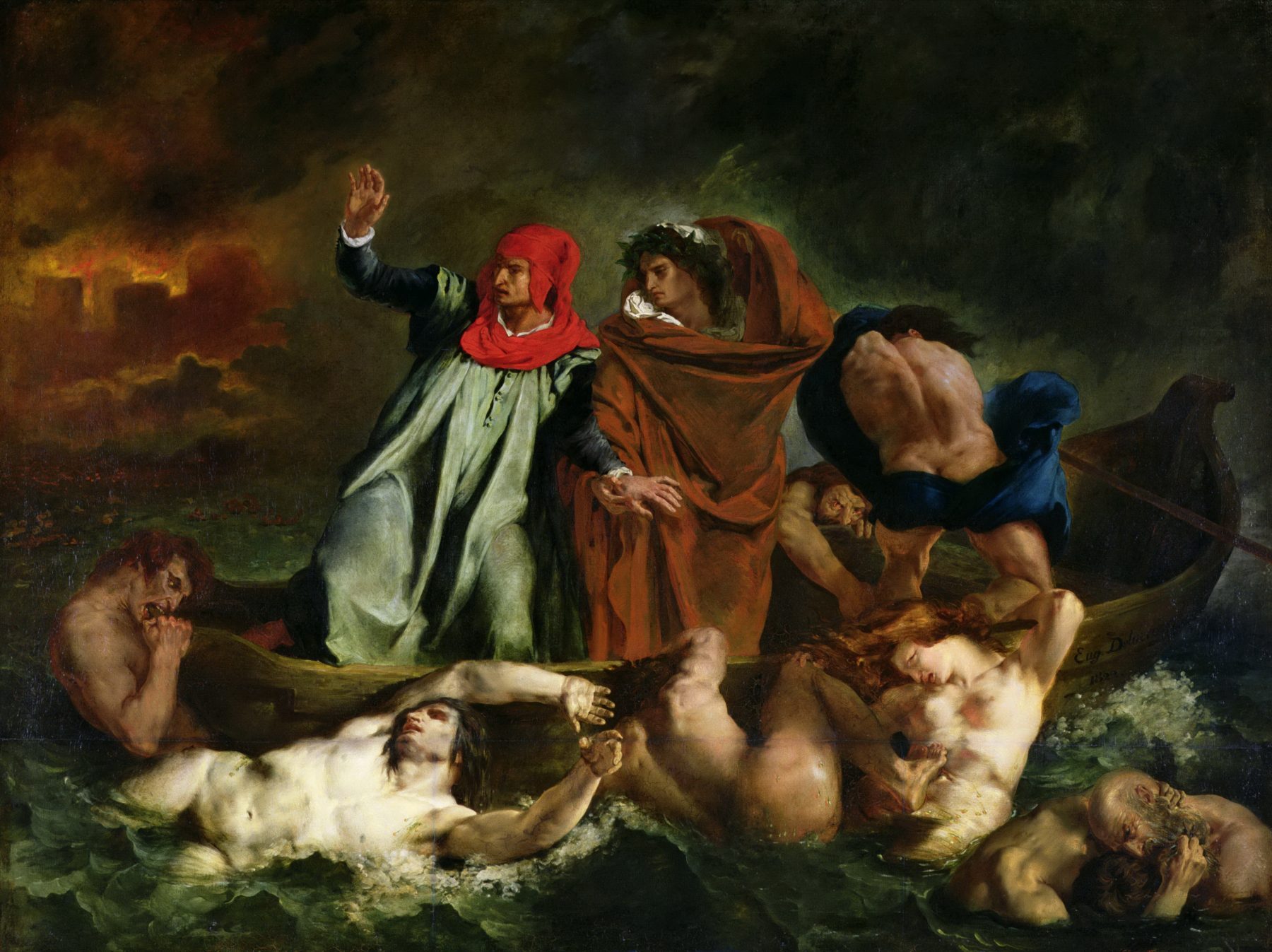 The novella Heart of Darkness describes a steamboat journey along the Congo River, during the brutal reign of the Belgian Emperor Leopold II. As the boat draws deeper into the jungle, the narrator, Marlowe, describes the atrocities of the ivory trade, and the cruelty of the Belgian imperial enterprise. His portrayals of the passive, suffering Congolese, as “faithless pilgrims bewitched inside a rotten fence” echoes Dante’s allegory in a critique of colonialism. At the end of his voyage, Marlowe meets Captain Kurtz, who has established himself as a god with the natives, and goes on brutal raids in search of ivory. Marlowe’s steamboat journey deeper into the wilderness is perhaps a metaphor for the dark depths of the human soul – where he finds nothing but cruelty and obsession.

Coppola’s war epic Apocalypse Now (1979) is based on Conrad’s Heart of Darkness and traces U.S. Captain Willard’s journey on an army boat across the rivers of South Vietnam during the Vietnam war. Willard witnesses the culture of US foreign troops, where soldiers have become desensitised to violence and attempt to surf Vietnam’s war-torn beaches. Deep in the rainforests of Cambodia, he finds Kurtz, a wayward megalomaniac who preaches amorality as military strength. Coppola comments on American militarism during the Cold War, and his concept of evil is a vacuum, where killing and violence have no meaning.

Peterson’s Das Boot (1981) recounts the claustrophobic and hazardous patrol of a German submarine during WWII. The patrol is surrounded and under attack by British war ships. As it plunges deeper into the sea to save itself, the submarine slowly starts to collapse and the soldiers face a slow death as oxygen levels deplete. But Peterson is more forgiving of human nature than Conrad or Coppola: initially destined to be forgotten at the bottom of the ocean, the captain and crew work together to extract the submarine’s accumulating water, kick-start the engine and bring themselves back up to shore.

Anselm Kiefer’s childhood in Germany was marked by the aftermath of WWII, and his paintings draw on nature and mythology to explore the nature of evil. The installation Velimir Chlebnikov consists of thirty paintings of oceanscapes and naval ships, housed in a corrugated-steel pavilion. The empty boats appear lost, alone and engulfed in the tempestuous seas. The spread of thick, dried and crackling paint further emphasises the sense of a ruin or relic. The title refers to an obscure Russian futurist of the same name, who theorised that naval wars happened every 317 years, and traced this back to the Trojan war. On the outset, Kiefer appears to be painting objective, secular scenes of battle ships at sea. But these scenes are highly allegorical, questioning both man-made evil, and a violent, impassive nature. 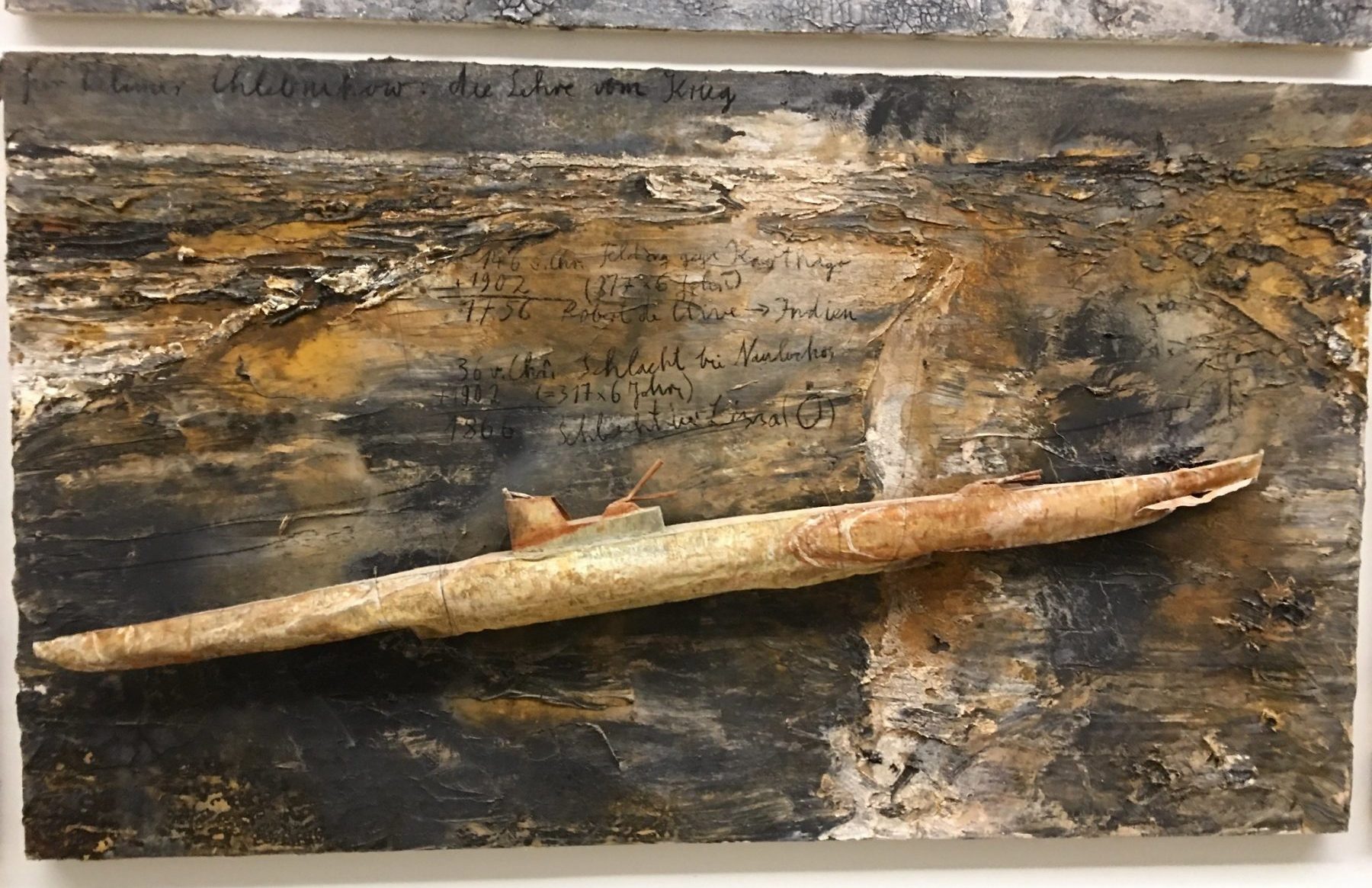