Satta Hashem is an Iraqi artist based in Leicester, UK. Hashem was born in Buhriz, a city in the Diyala Province that was known for its support of Iraq’s Communist party, and moved to Baghdad with his family as a child. Hashem started as a self-taught artist before studying in Algeria, and later at the Vera Mukhina Institute of Art and Design in Saint Petersburg. Hashem returned to Iraq between 1980 and 1983 to fight as a partisan with the Kurdish Peshmerga. He moved to Sweden in 1989 and settled in the UK in 2000. Hashem’s prolific body of work comprises of thousands of paintings, drawings and prints, and appears in public collections at the The British Museum, London, the Museum of Contemporary Arts, Kaliningrad, and the Leicester Museum & Art Gallery, UK and Handelsbanken, Stockholm, among others. He speaks to Ruya about myth and abstraction in his work. 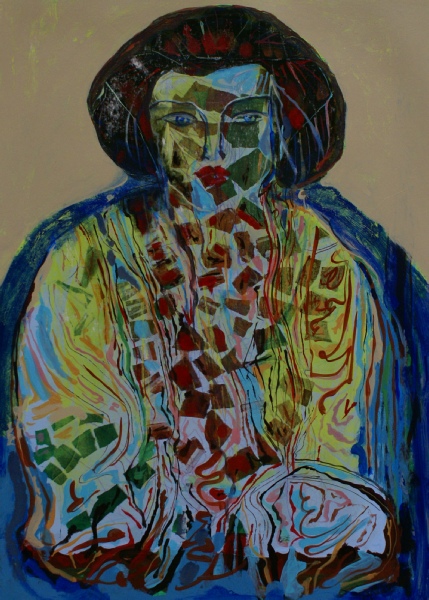 What was the first image that you remember admiring?

I first visited the Iraq Museum as a child. A mural at the entrance depicted the Shanidar cave in Shamshamal, where the remains of Neanderthals were found. A section dedicated to the discoveries at Tell Asmar in the Buhriz area displayed sculptures of birds and other small objects in ascending sizes. These artefacts and images may be what made me become an artist. In a recent portrait of my niece, I discovered some similarities between her face and the Sumerian mask of the Lady of Warka at the Iraq Museum, dating back to 3100BC. Many Iraqi women share features with ancient depictions in my opinion. 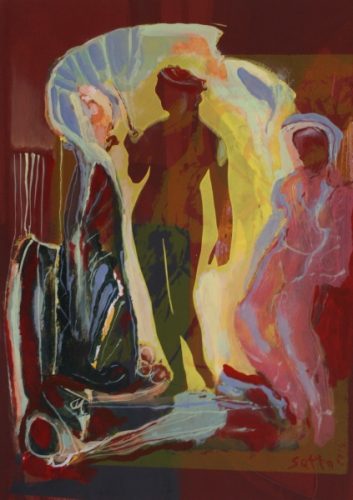 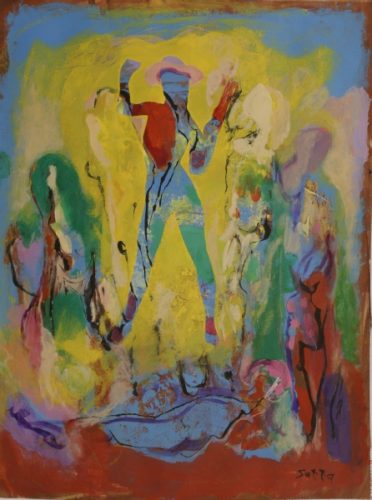 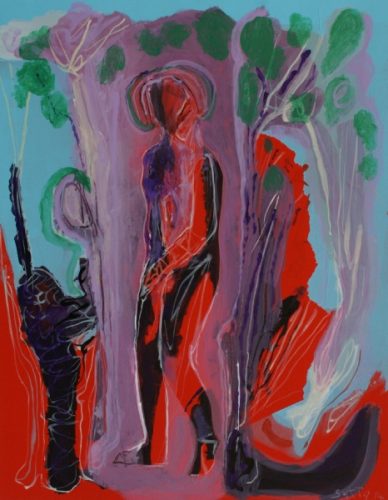 What is the role of an artist in your opinion?
The artist should be involved in people’s lives, and reflect their struggle for freedom and power. In Iraq, I read a book by the American philosopher Sydney Finklestein about realism and art, which had been translated to Arabic. It led me to think about art as a philosophical or political action. As students of mural painting at the Mukhina Institute in Saint Petersburg, we were taught to design our compositions to fit the local context and culture. I also strive to understand the psychology and harmony of colour. I’ve been writing a book in Arabic about the history of colour, based on 25 years of personal research. For example, the colour black often has negative associations, like death and evil. Iraq is known as balad al sawd, the black country. Yet black stones were coveted by Iraq’s ancient civilisations and imported from Oman 5000 years ago. Nearly thirty statues of Gudea (2nd dynasty of Lagash) are in black stone. Later, the Abbasid dynasty in Iraq had a black flag. For ancient Iraqis, black was a holy colour. 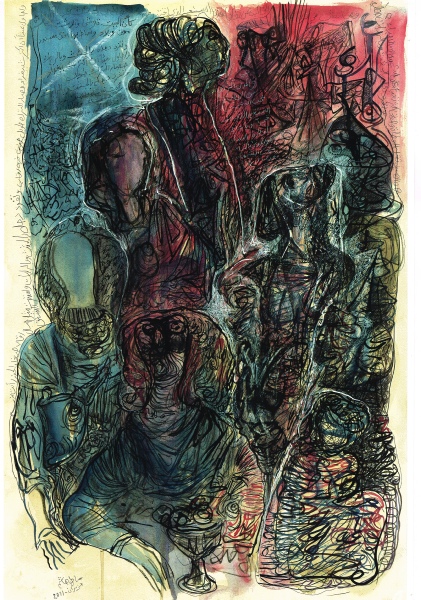 When you were a student, Iraq had a strong art scene and internationally renowned art institutions, which were threatened by the increasingly authoritarian nature of the Ba’th party. How did your own work develop in that context?
My family and my personal affiliations with the Communist party made it difficult for me to live and practice as an artist in Iraq. Some say that the Communist Party in Buhriz grew as a result of the city’s Jewish community, who were informed of the Russian revolution by the Jews of Baghdad. Others attribute it to the contact that workers from Buhriz had with British soldiers, during the construction of a railway from Baquba to Kirkuk.

My father wanted me to study engineering. I secretly applied to the Institute of Fine Art in Baghdad as a teenager in 1974. Shaker Hassan Al Said, who interviewed me, was impressed by my knowledge of contemporary Iraqi artists, but my application was rejected when I refused to become a member of the Ba’th party. I worked as an artist’s model at the Academy of Fine Art in 1975, where Faiq Hassan was teaching. I learnt by listening to the lessons and interacting with the students. I stole books from bookshops, and would copy the drawings. I joined a cultural center for youth in Baghdad, and was nominated for a young artist’s award for my poster commemorating the 55th anniversary of the revolt against the British in 1920. The award went to a former soldier in the Iraqi army who had painted a portrait of Saddam Hussein and Ahmed Hassan Al Baker. The following year, I painted a dove holding an olive branch. I was reprimanded for representing peace, at a time when Iraq was vocal against Israeli and American imperialism. I stopped showing work after that, it was becoming too dangerous. In May 1978 the Ba’th party executed 31 communists, and I left in August that year to avoid conscription. 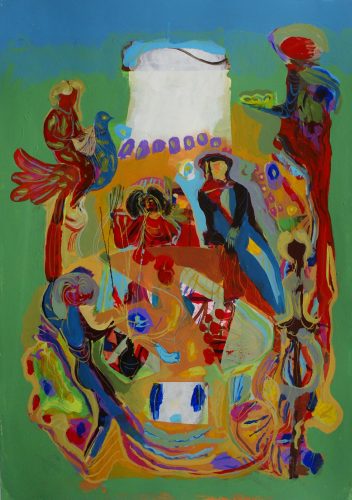 Like many in Iraq’s exiled intellectual and communist circles, you went to study in the former Soviet Union. Did the daily life there live up to your ideals and expectations?
You cannot compare the Soviet Union to the oppression we experienced in Iraq. I came to the Soviet Union in 1983 with strong ideals about the revolution, which were amplified by what I had lived through as a partisan in Kurdistan. I was shocked by the poverty: people queuing for food or to sit in a café, and I queued with them. My professors and peers criticised the system to me because I was a foreigner. Nobody believed in the revolutionary ideology. At the same time, I attended spectacular ballet and opera performances, often twice a month, and visited the Persian miniature collections at the National Library of Russia, and the Russian icons at the Russian Art Museum. The Surikov Art Institute in Moscow, the leading art school at the time, was too rigid and academic. When I enrolled at the Mukhina Institute, it was experiencing a revival as a result of the Glasnost in the mid-80s. 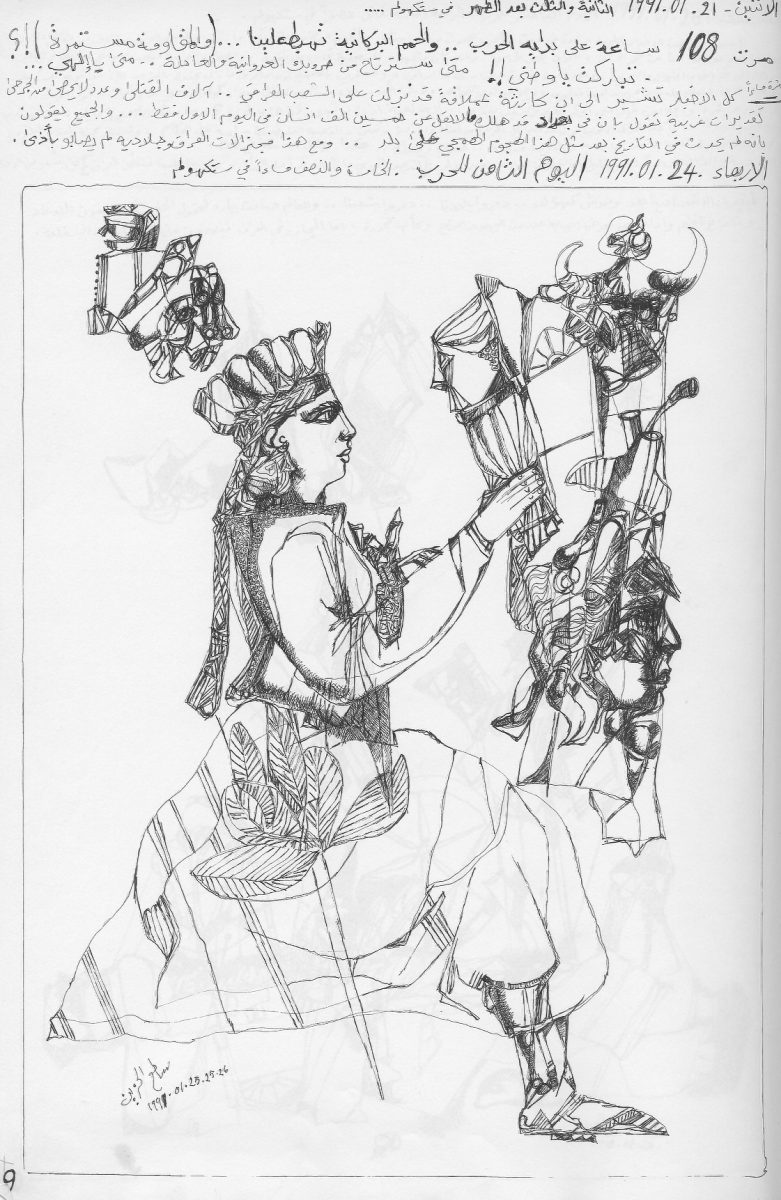 Satta Hashem, from the War Diaries, 1991. Courtesy of the artist. 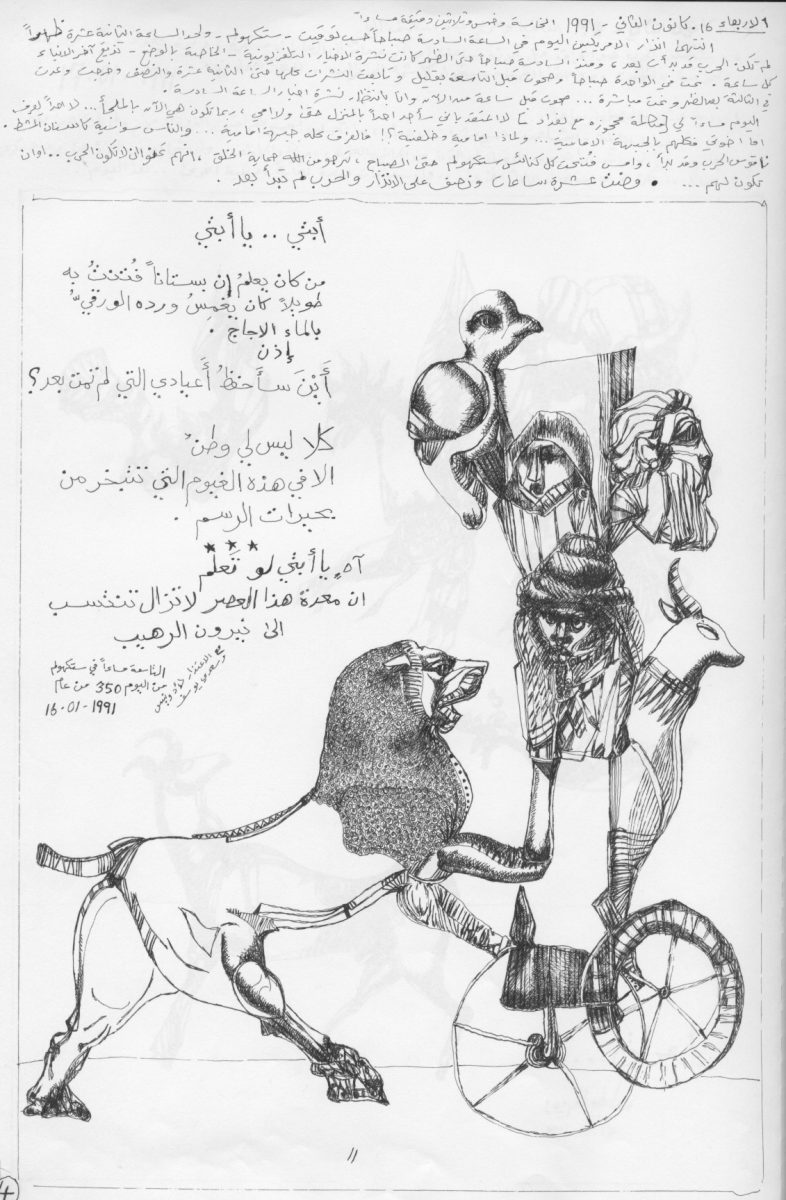 Satta Hashem, from the War Diaries, 1991. Courtesy of the artist.

If as an artist you are engaged politically, then why not paint reality?
Realism is limited in the ways that it can depict real life. What about the unseen things? I’m not simply chronicling events. I want to the viewer to meditate and to think. I consider myself a realist painter of sorts, as I want to connect my work to modern life. Islam is the only religion that does not use images to spread its doctrine. Its main art forms were calligraphy and ornament. It is an image without an image. The beauty is without meaning and this forces you to think. Artists like Malevich and Kandinsky understood and adopted these principles. As Muslims, we re-connected with images after the colonial period. Archaeological excavations showed Iraq’s rich history in image-making. Photography began to appear in Iraqi newspapers in the 1920s, and young Iraqi artists studied abroad on scholarships. These changes served as the basis for modern Iraqi art. Artists like Jewad Selim and his students drew inspiration from Iraq’s ancient past. His ideas came to dominate the Iraqi art scene. I made a decision not to be limited by local Iraqi culture. I draw on influences gathered from studying in Algeria and Russia, and living in Sweden, Greece and the UK.

You’ve lived in exile for over 40 years, yet Iraq, and its ancient history often prevail in your work.
Tragedy is deeply ingrained in Iraq’s history. I use these ancient symbols, and their dual meaning in particular, to reflect on this. The lion, for example, signified a necessary evil. Yet in my own lifetime every Iraqi became a victim. In Ancient Iraq, Babylon’s patron deity Marduk was known as a peaceful god and a builder. In the north, the Assyrian rulers fashioned themselves as fighters. I took these two meanings of building and fighting to think about our present state. 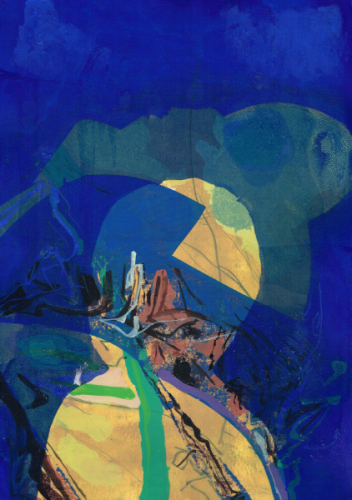 How would you recreate ‘home’ today in an artwork?
My recent painting “Festival” is about the Eid celebrations in Buhriz. We used to go as a family to the cemetery to commemorate our loved ones. After the first Gulf War it became clear that I could never go back home. Iraq to me is no longer a real, physical place. It is an idea.