Ali Rashid is an Iraqi-born painter and poet based in the Netherlands. Rashid trained at the Institute of Fine Art in Baghdad and later at the Royal Academy of Arts in the Hague. Rashid lived through the Iran-Iraq War and the first Gulf War and his work is a direct response to the ongoing violence and conflict in Iraq. In his earlier work, the artist drew detailed and chaotic scenes incorporating human and mythological figures, today he produces large scale abstract paintings and ink drawings which incorporate the written word, collage and media clippings. Rashid argues that his work depicts the “language of war.” 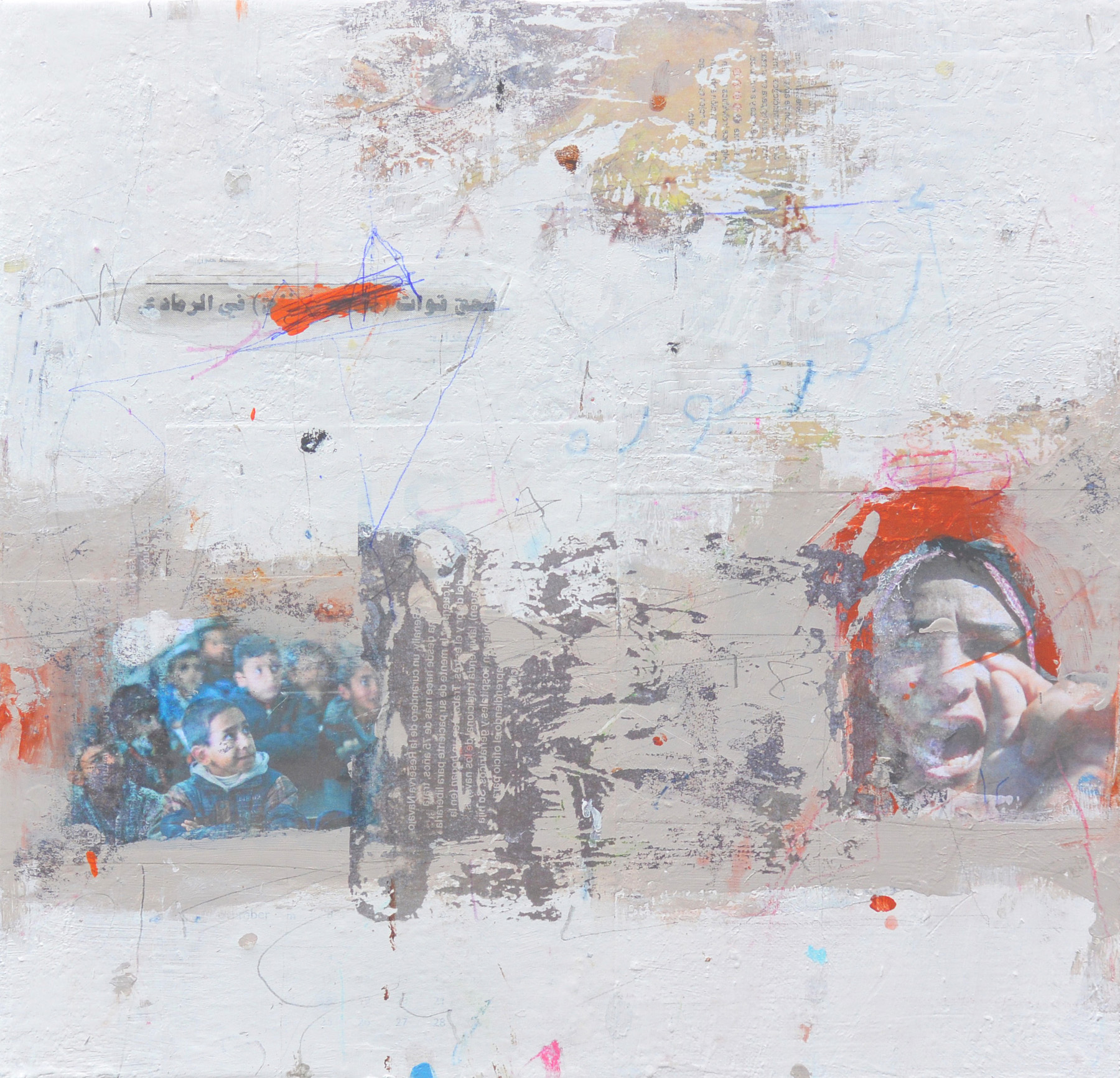 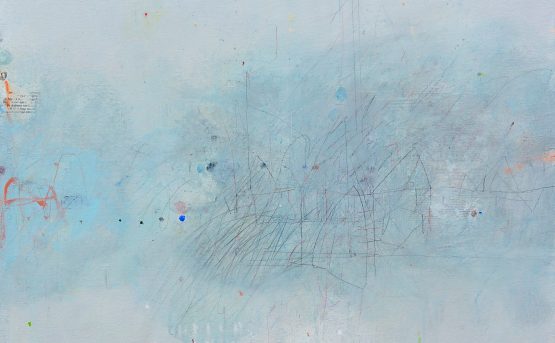 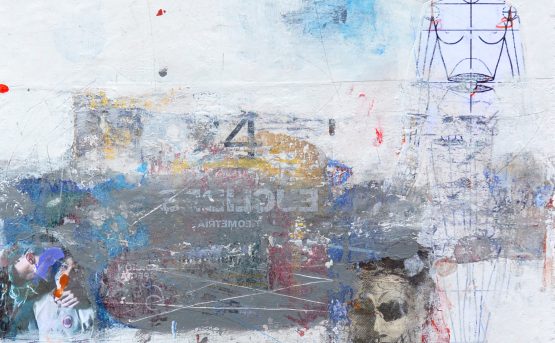 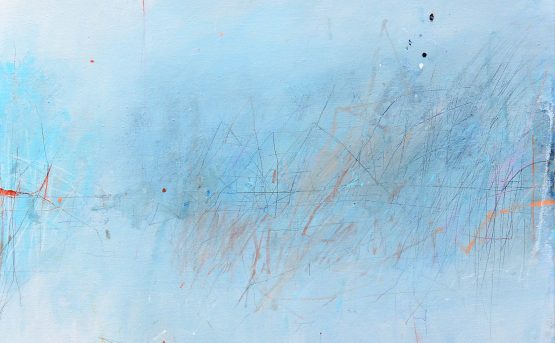 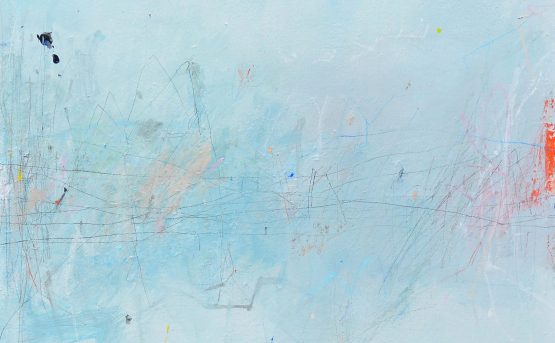 You’ve described your work as depicting the “language of war”. What is this language and how have you approached it as an artist?
War borrows from the language of those that create it; it is a language riddled with hatred, violence and exculpation. When atrocities are being perpetrated—mass killings, the destruction of entire cities, bringing death and loss to whole populations—no artist can shut their eyes to what is taking place. I attempted to create my own language, one antonymous to that of war and its eulogizers: one that documents its horror and depicts its victims in the spirit of protest. A language that references war’s insane, atemporal nature, and bluntly rejects its culture. I create work on a daily basis as an act of protest at war and the suffering of its victims.

You have used war photography, satellite imagery and newspaper clippings in your recent work. How does Iraq’s portrayal in the media influence your work?
Coverage of Iraq in the news continues to affect me psychologically, despite having lived abroad for over thirty years now. The images that we see in the media either depict Iraqi cities destroyed and disfigured by war, or mass displacement. I want to reformulate these images as a form of protest. I use these images, texts and clippings to construct a dialogue in the work between art and reality.

I attempted to create my own language that documents its horror and depicts its victims in the spirit of protest.

In the 1980s you produced a series of sketches about the Iran-Iraq War, which you continued to work on while in the Netherlands until 2003. What drove you to produce these works?
The Iran-Iraq War was particularly harsh because it lasted for eight years. It destroyed everything and left up to a million dead, not to mention countless people physically and mentally disabled. Every Iraqi household lost family members to the war. My younger brother Wasfi Rashid died in the fighting aged twenty-four. He was a promising artist. All that unbearable pain drove me to try and preserve him in ink on paper, in a project that I named Documenting Memory. The sketches are violent and shocking; they make you feel war’s ferocity and the agony of its victims. They still carry the violence of the scenes we witnessed and the shock of the encounter. 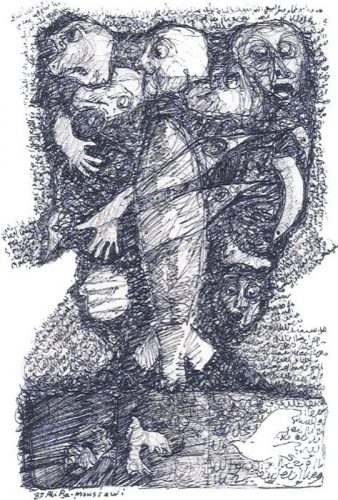 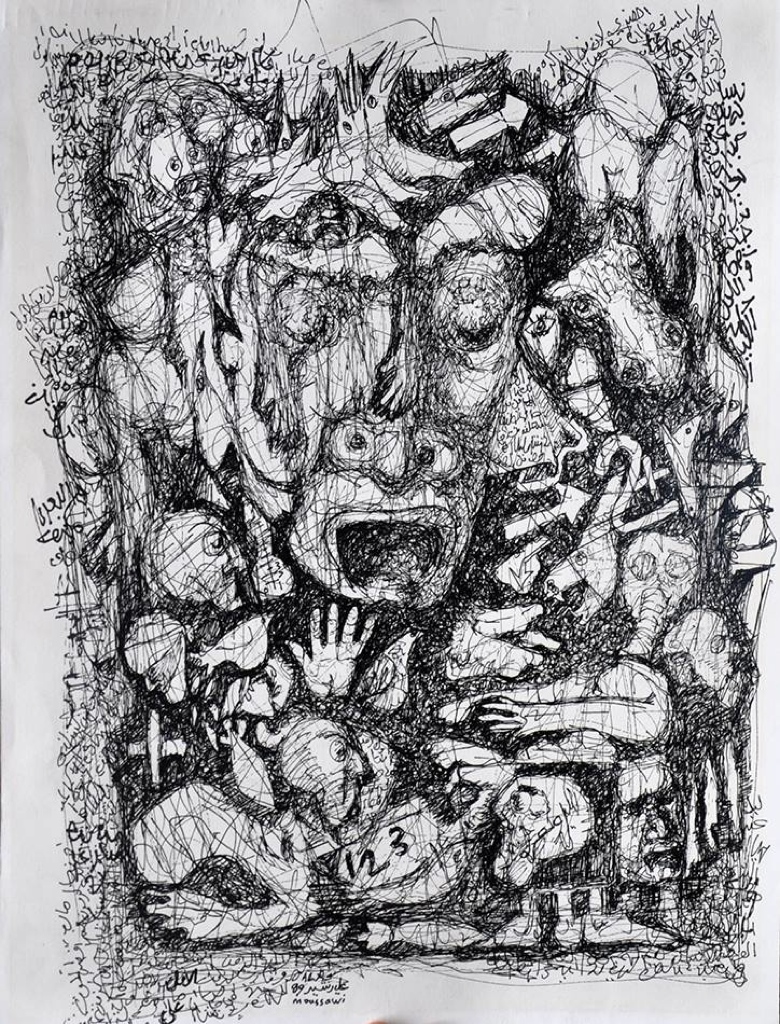 Despite having left Iraq in the 1990s, your work still depicts the country’s conflict and violence. How has exile changed your approach to this subject?
Living in exile in the Netherlands gave me the opportunity to study, undertake further research and encounter new artistic movements. I became influenced by Cy Twombly’s minimalism, as well as Antoni Tàpies and Anselm Kiefer’s use of second-hand material to document daily experiences. Kiefer has also worked a lot on war. Conceptually I was drawn to Joseph Beuys who believed that art is for everyone and that anyone can make art, even if they are not artists. My practice also developed as a result of working in solitude and keeping apart from the gossip and socializing that obstructs the philosophical, epistemological and aesthetic inquiries of artistic production.

As a result of this, my work adopted new forms, transmuting the reality of war and using materials that consciously evoked the subject through intertextuality, fusion and metaphor. I discovered that the artist is not required to draw form, but rather its trace. This prompts the audience to scrutinize the trace for meanings. The trace is a hypothetical framework through which the viewer engages with the work. There’s a line I like to use with art students and researchers: “There are those that take hours to describe the smallest scene, and those who in a single sentence can contain a history.” In my visual work, with simple references and a minimalism of colour and form, through dialogue and research and transmutation, I attempt to bring multiple scenes within the scope of a single image. I stopped titling my work over ten years ago. Titles stultify the audience’s ability to discover the work, its close references and wider implications. They constrict a conversation that is so vital to the enduring importance of the work. 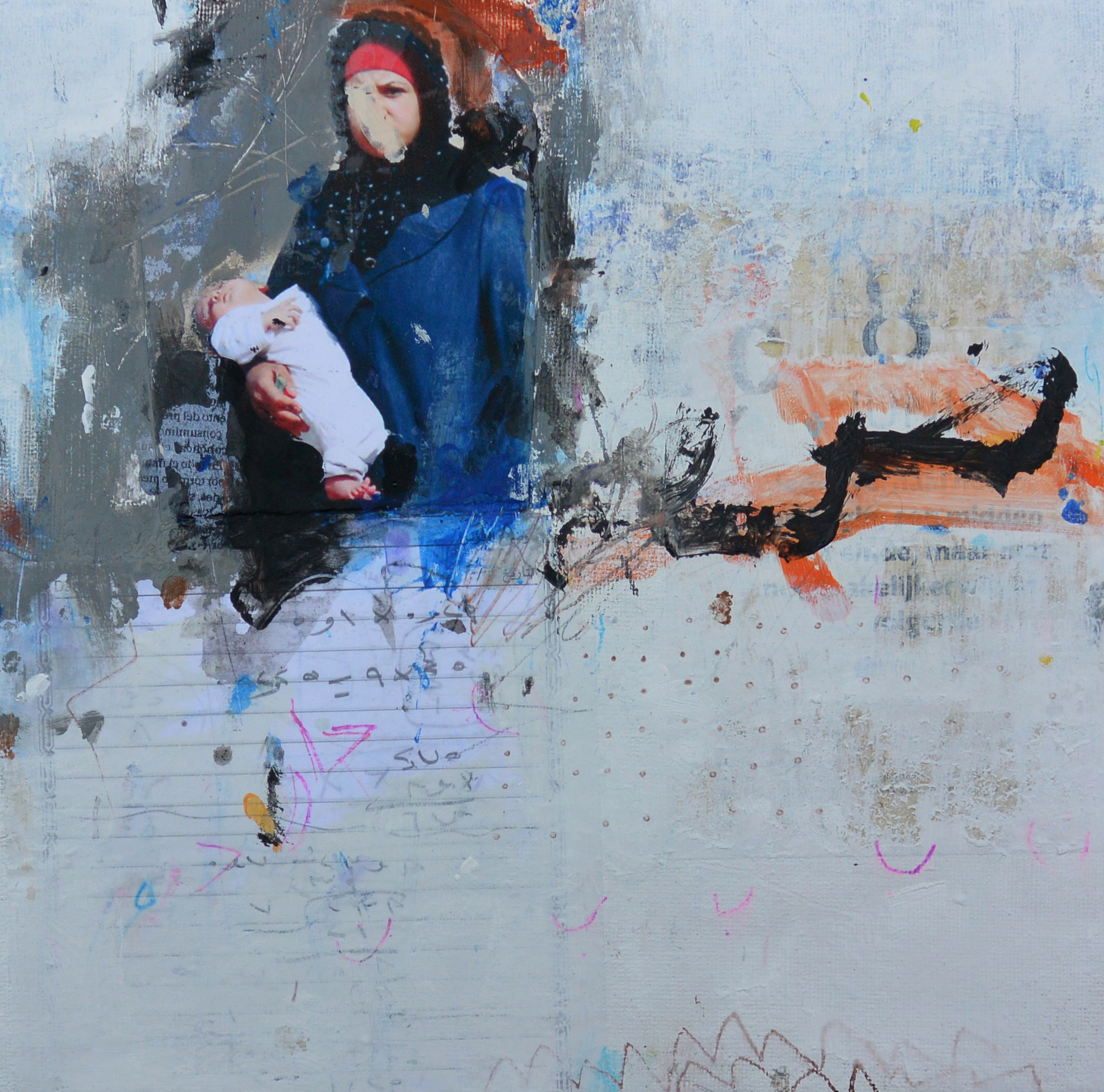 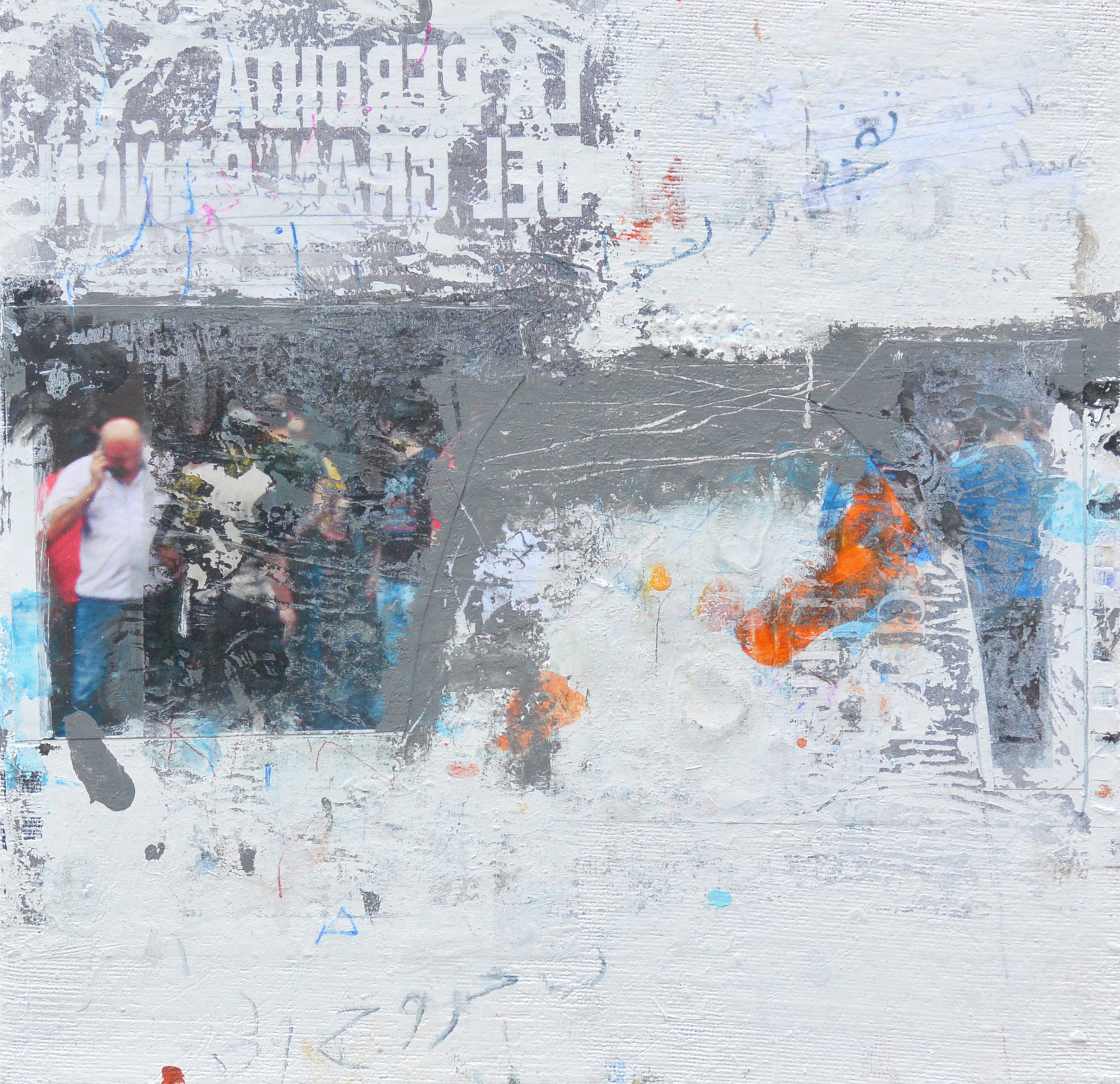 The artist is not required to draw form, but rather its trace. I attempt to bring multiple scenes within the ambit of a single image. 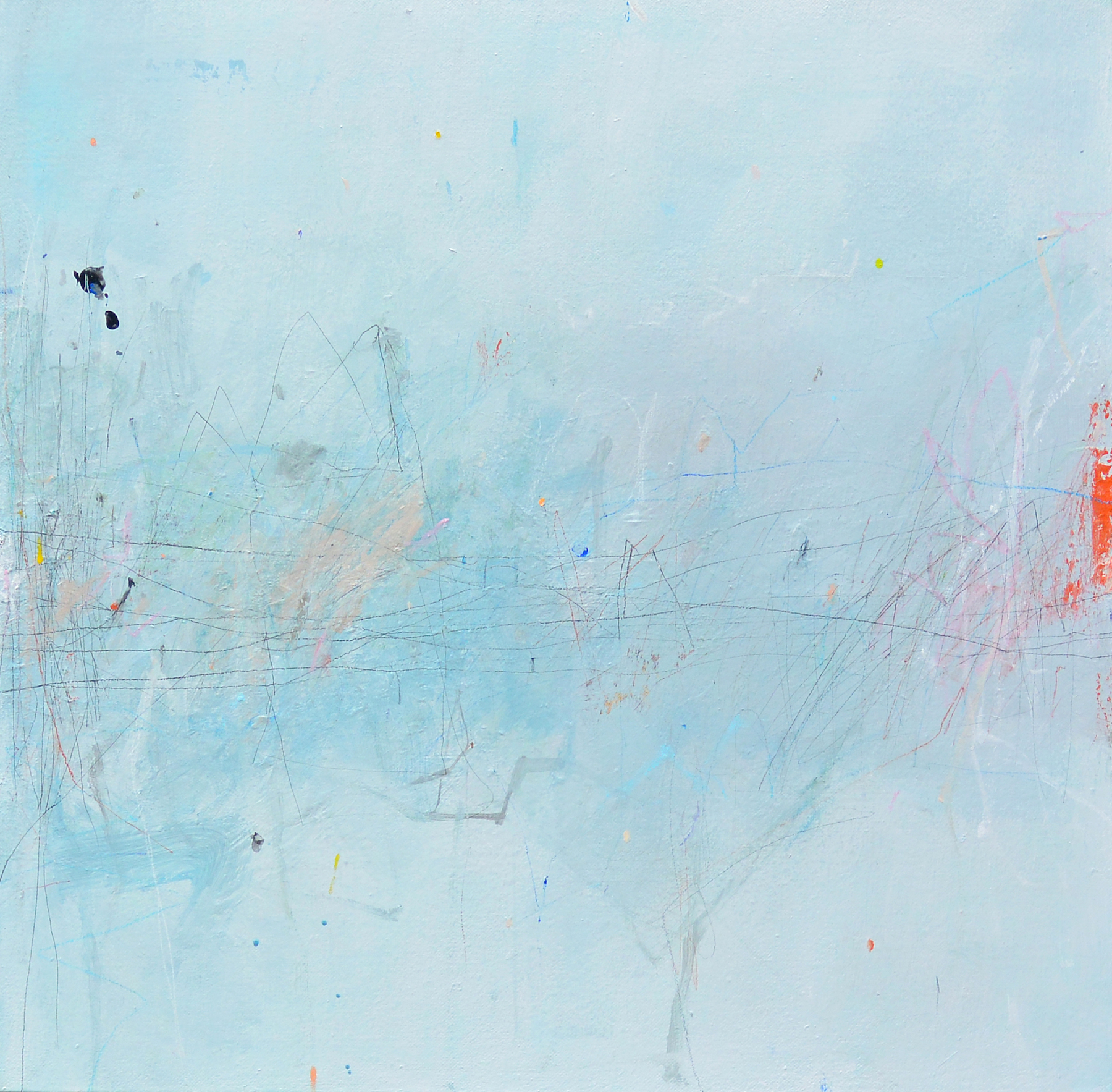 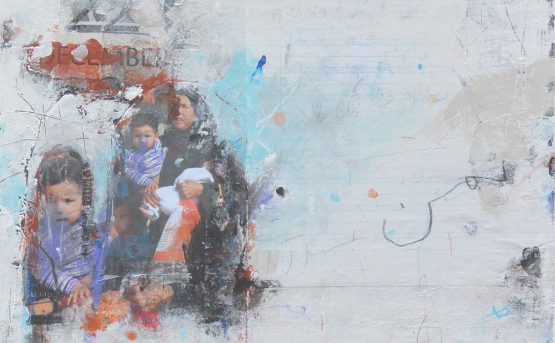 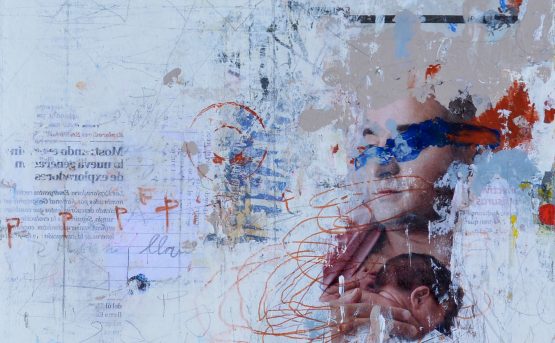 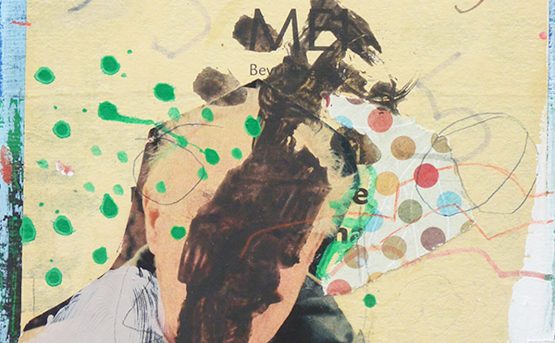 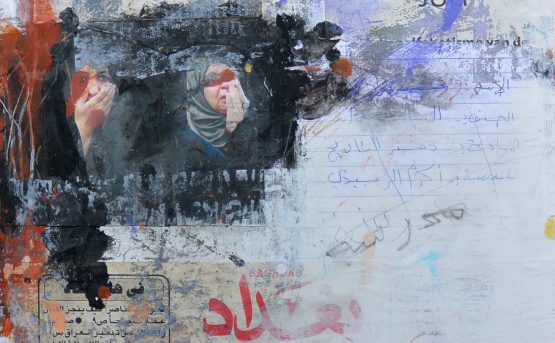 If you were going to recreate Iraq in your work, what it would look like?
There’s a degree of confusion, of not-knowing-where-to-begin, when it comes to embodying a country like Iraq in a work of art. Despite a succession of conflicts, destruction, corruption, and vile sectarian ferment it is a country bursting with creative talent and kind, tolerant people. There is so much pain which I reference in my work. Yet I conceive of Iraq as a date-palm that cannot be uprooted. Iraq has had its setbacks but it has never disappeared. Baghdad has fallen time and again and the Iraqis have rebuilt it. Iraq’s strength lies in a history that reaches back seven thousand years into the past.

How do artists give expression to the horrors of war, in a way that is different to that of human rights activists or journalists?
The journalist presents a picture of war in order to convey the fact of it. The activist engages with the reality of war by decrying it and looking for ways to help and defend its victims. The artist points to the horror of war, and dares the world to look deeper at the sheer scale of the crime. The artist’s work defies time: it is an historical archive, an enduring witness to the destruction brought about by war. The artist awakens a spirit of protest that endures across time. In time, a news report or an activist’s political career will have less influence than Picasso’s depiction of the bombing of Guernica.

The above text is an edited extract from a longer interview in Arabic with Ali Rashid and was translated by Robin Moger.