The Ruya Foundation is pleased to announce the launch of its new publication Hiwa K and Aneta Szyłak in Conversation: 8 Essays Selected By the Artist and the Curator. This is the second title in Ruya’s educational publishing project, Ruya Notebooks. For each Notebook a well known artist, curator or critic selects five short texts that they have identified as fundamental to their creative development. These texts will then be translated into Arabic, in most cases for the first time, and the resultant Notebook distributed for free to artistic communities in Iraq and the wider Middle East. The aim of the project is to provide resources to schools, communities and individuals who have previously had little or no access to educational art texts.

The Berlin-based Iraqi-Kurdish artist Hiwa K recently participated in Documenta 14, Kassel and was named in the ArtReview Power 100 of 2017. A solo presentation of his work is currently at S.M.A.K. Ghent. Aneta Szyłak is a curator, art theorist and writer based in Gdańsk, Poland. She is currently the artistic director of Alternativa Festival in Gdańsk and works as the Director’s plenipotentiary for establishing the Museum of Contemporary Art in Gdańsk. Szyłak has worked closely with internationally acclaimed Iraqi Kurdish artist Hiwa K since 2005 and was the first curator to recognise and promote his practice. In 2008, the pair founded Estrangement, a series of workshops and discussions held in the Kurdistan Region of Iraq, the outcomes of which were exhibited at The Showroom in London and at the Alternativa Festival in Gdańsk. In 2016, the Ruya Foundation invited Szyłak to hold a workshop on art practice with Iraqi artists in Baghdad. 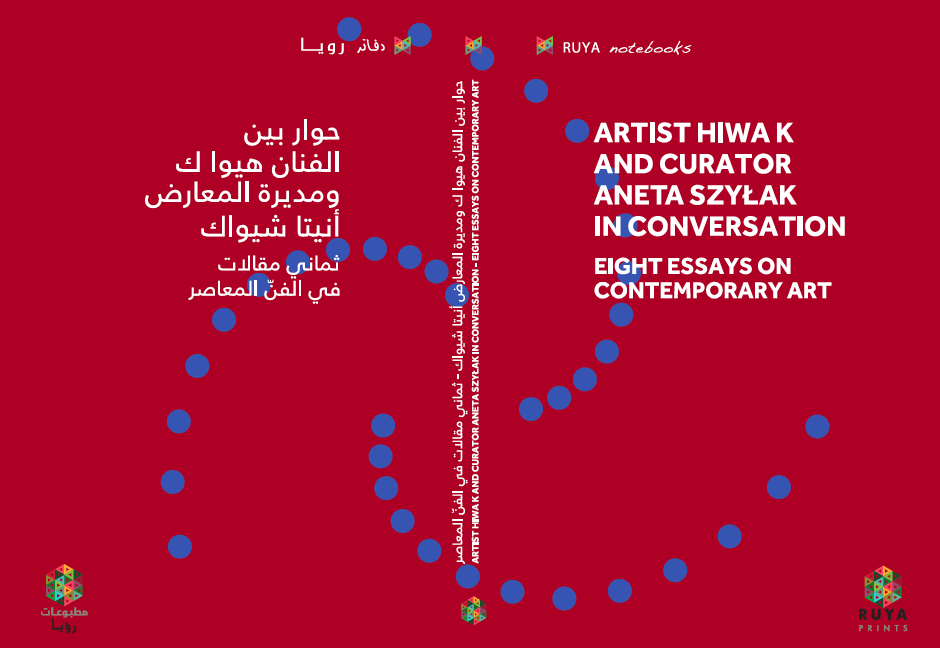 Hiwa K and Aneta Szyłak in Conversation: 8 Essays Selected By the Artist and the Curator will include a new introductory essay by Szyłak entitled ‘Art, Companionship and Everyday Life’ and the following eight texts:

Michel de Certeau, ‘General Introduction to The Practice of Every Day Life’ (1980)
Mikhail Bakhtin, ‘Art and Answerability’ (1919)
Boris Buden, ‘The Pit of Babel or: The Society that Mistook Culture for Politics’ (2005)
Homi K. Bhabha, ‘Articulating the Archaic’ (1994)

The impetus for the launch of Ruya Notebooks was twofold. Firstly, it is the Ruya Foundation’s mission to bridge the gap between the conflict-ridden regions of the Middle East, particularly Iraq, and the rest of the world. Despite greater access to information brought about by the Internet and other technological advancements, access to good educational art texts in the Middle East is still restricted by socio-economic factors, one of the most limiting being the ability to speak a Western European language. Secondly, access to scholarship is generally constricted in the region, inhibiting the ability of creative communities to think freely and without censorship. Combating these issues requires a host of developments, including access to good schools and teachers, and well researched and updated curriculums and methodologies. Ruya Notebooks aims to contribute in some way to this effort.

A number of publishers and writers generously waived reproduction fees to enable Ruya Notebooks to launch. Future participants will include the curators Marie Muracciole, Hans Ulrich Obrist and Philippe Van Cauteren and the artists Kader Attia, William Kentridge, and Fouad El Khoury. Selected texts will include pieces by Etel Adnan, Marcel Broodthaers, Hans Haacke, Lucy Lippard, Agnes Martin, Linda Nochlin and Gayatri Spivak among others. Details of the third title for 2018 will be announced in the spring.