In the early days of the first Gulf War in 1991, the Iraqi artist and writer Nuha Al Radhi dreamt of a tree sprouting loaves of bread. In another dream, American troops marched down Haifa Street, a newly-restored residential quarter in Baghdad, led by a woman wearing a cape. Haifa Street’s state of the art, futuristic high rises were part of a wider development plan initiated by Saddam Hussein in the early 1980s, as the city prepared to host two international conferences. 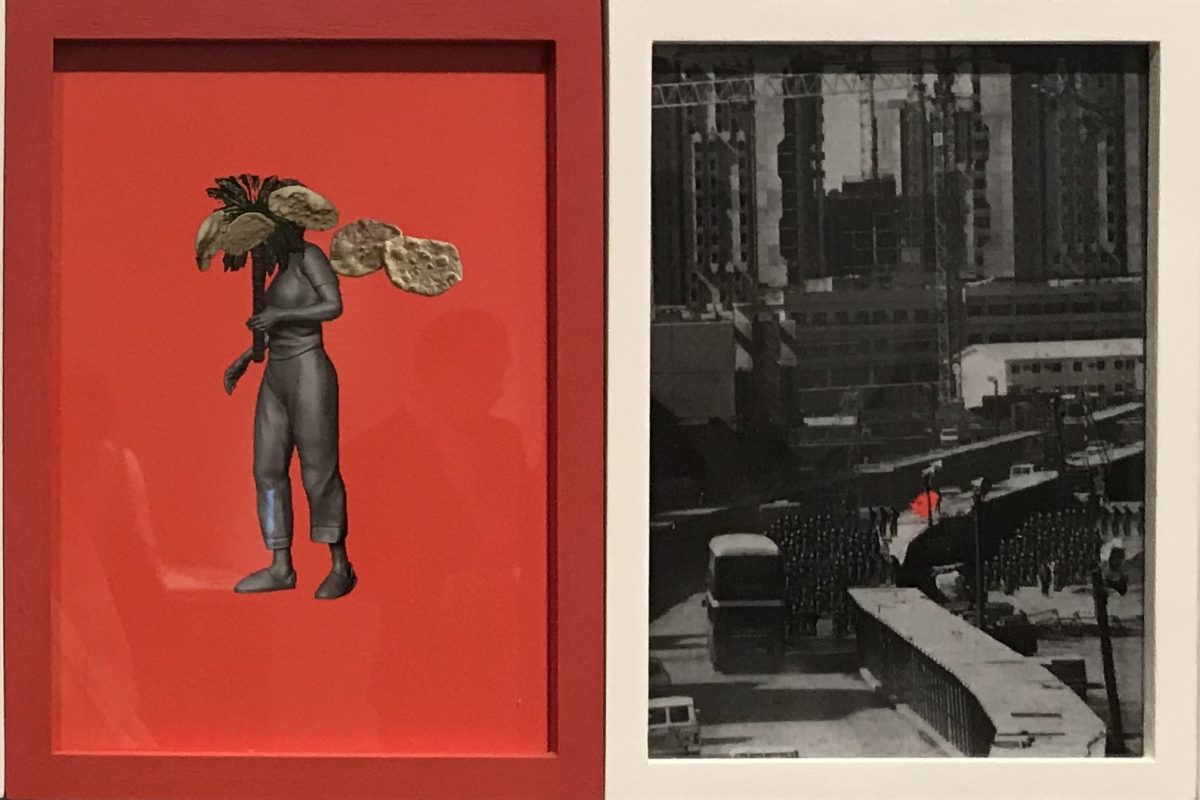 Nuha Al Radhi’s dreams, as rendered by Ala Younis for her installation Plan for Feminist Greater Baghdad, 2018.

Al Radhi published her diaries of the first Gulf War and its aftermath in 2003. Today, her dreams have been reproduced as 3-D renders and digital images in the Jordanian artist Ala Younis’ installation ‘Plan (fem.) for a Greater Baghdad,’ which was commissioned and presented by the Delfina Foundation in London. In the rendering, Al Radhi’s head is concealed by a palm tree and floating flat breads. The awkwardness of the image highlights the nature of the dream as a construct. Beneath it, the image of an orderly line of soldiers has been digitally collaged onto a photograph of Haifa Street in the early ‘80s, when it was still under construction.

Younis’ project weaves together the stories of Iraqi women whom she believes played a pivotal role in the urban development of Baghdad from the 1950s to the present day. ‘Baghdad’s urban development in those decades is directly related to its political upheavals. It reveals the relationship between architecture and power,’ says Younis. As well as Radhi, this includes the stories of the architect Wijdan Maher, who was part of a team that oversaw the designs of the Martyr’s Monument, and several buildings through her job at the department of tourism in the Ministry of Culture in the early 80s, and the writer Balkis Sharara, wife of the Iraqi architect Rifaat Chadirji, who was imprisoned on the whims of the Ba’ath party in 1978. Sharara carried documents to and from her husband’s cell in Abu Ghraib allowing him to write his seminal book Al Ukhaidir and the Crystal Palace. ‘It was Maher who announced to Sharara that Chadirji was going to be released from prison in 1980,’ Younis read in Sharara’s book, ‘Saddam wanted him to work on these new construction projects.’ The artists Fahrelnissa Zeid and Leila Al-Attar, and architects Ellen Jawdat and Zaha Hadid also appear in Younis’ work.

The stories in Younis’ piece revolve loosely around Le Corbusier’s designs for the Baghdad Stadium and Sports Centre. The complex comprising an amphitheatre and indoor gymnasium formed part of a wider master plan for the city devised in the 1950s by the then-Prime Minister Nouri Al Said, and commissioned by the Iraqi monarch King Faisal II, during Iraq’s first petrol boom. This original master plan included new infrastructure designs by Le Corbusier, Walter Gropius, Frank Lloyd Wright, Aalvar Alto and Gio Ponti. A generation of young Iraqi architects such as Nizar Jawdat and Chadirji also became involved in the designs and construction. Yet these projects were put on hold after the revolution in 1958, which overthrew the monarchy. ‘The different regimes that took control of Baghdad in the decades that followed, through coup d’états, revolutions and invasions, all had different visions and ideals for the future. The master plan never disappeared but it adapted to the times,’ says Younis. 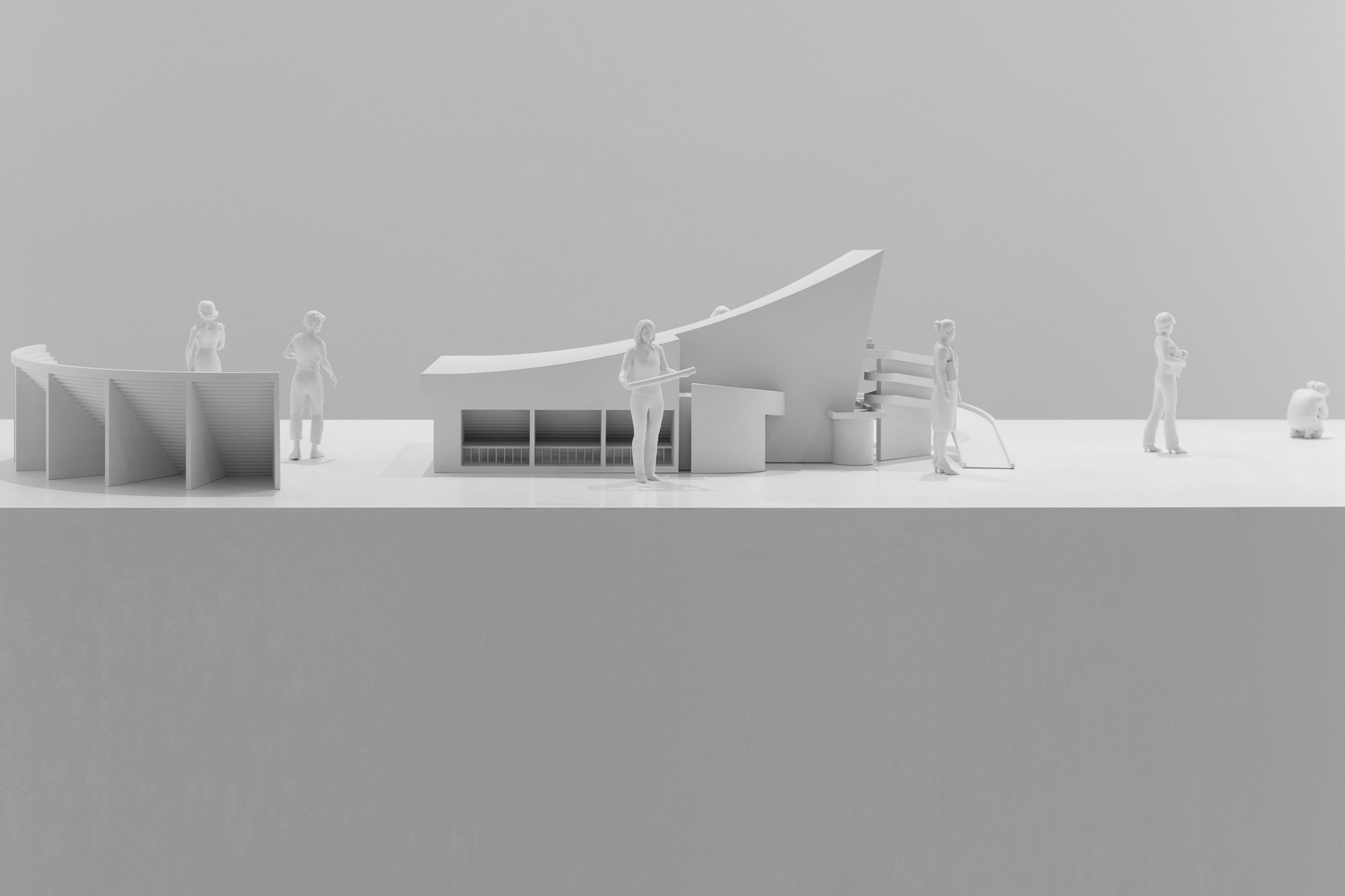 The project is a sequel to Younis’ earlier piece Plan for a Greater Baghdad (2015) that was commissioned for the exhibition ‘All the World’s Futures,’ at the 56th Venice Biennale. In this earlier work, Younis told the story of seven men, including Chadirji, whose names appear in the stories related to the making of Le Corbusier’s gymnasium in Baghdad. ‘The word ‘plan’ has two Arabic translations, the first is moukhatat which means a scheme or drawing, the other is khutta which means a plot and has feminine inflection,’ explains Younis. This duality made space for two gendered versions of Baghdad’s story. 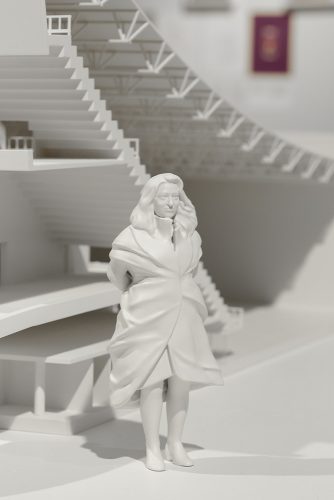 Le Corbusier’s designs were revived after his death in the late ‘70s by the civil servant Sherine Mohammed Ali (who also features in Younis’ installation) and the building was completed in 1980. Younis’ installation comprises a model of the gymnasium and 3-D prints of seven female figures, whose images were developed from 3-D renders of photographs and archival materials found by Younis. Hung behind it is a frieze of framed images and text taken from architectural drawings, building reports, exhibition catalogues, magazines, diaries and interviews. They tell the stories of these women and of Baghdad’s urban development, chronologically from right to left. Among the featured women is Nada Zebouni, an architect who went from Baghdad to Paris for a summer internship at the office of Le Corbusier’s contractors. Two paintings by the artist Fahrelnissa Zeid, the Turkish wife of the Iraqi Prince Zeid who was exiled after the 1958 incidents, also feature in the frieze. Upon her settlement in Amman, ‘Zeid set up a womens art academy in Amman. Some of her students went on to open the city’s leading cultural institutions like Darat Al Funun,’ Younis explains. The cover of the first issue of Imara, an architecture journal that Maher published in 1982, appear alongside Sharara’s diaries. ‘I have met some of the women who appear in the work. They now live in London and Maher came to see the exhibition,’ says Younis. Towards the end of the timeline is architect Zaha Hadid’s lecture at Darat Al Funun in Amman in 1997, which Younis attended as an architecture student, and the revival of the discussion on Le Corbusier’s gymnasium by the architectural historian Caecila Pieri, who visited Iraq early after the 2003 US-led invasion. ‘Zaha did not have any projects in Iraq, yet she was so important for a generation of young architects in the Middle East, including myself,’ says Younis, ‘Her work on deconstruction in architecture mimics Baghdad’s own unravelling.’

As well as showing the relationship between buildings and power, the project also questions the nature of archives, writing history and the quest for knowledge. Younis can describe in detail the content of a building report, anecdotes about a person’s life written by others, or her memories of Zaha Hadid’s lecture in Amman. ‘A student asked her if she ever uses a ‘scale’ (an architecture ruler) and she was irritated by the question,’ she recalls. In remembering, Younis reveals an outstanding memory, which like her speech, fast-paced and soft is rushing to catch up with her encyclopaedic knowledge. The presentation of her research as a web of interconnected dates, memories, reports, stories, paintings and photographs, as opposed to a ordered archive, or as an article in an academic journal is therefore fitting. ‘Everything is so interlinked,’ says Younis. ‘Sometimes, when I’m giving a tour of the installation, I notice aspects that I’ve missed, or images that could be swapped or reworked,’ she says. 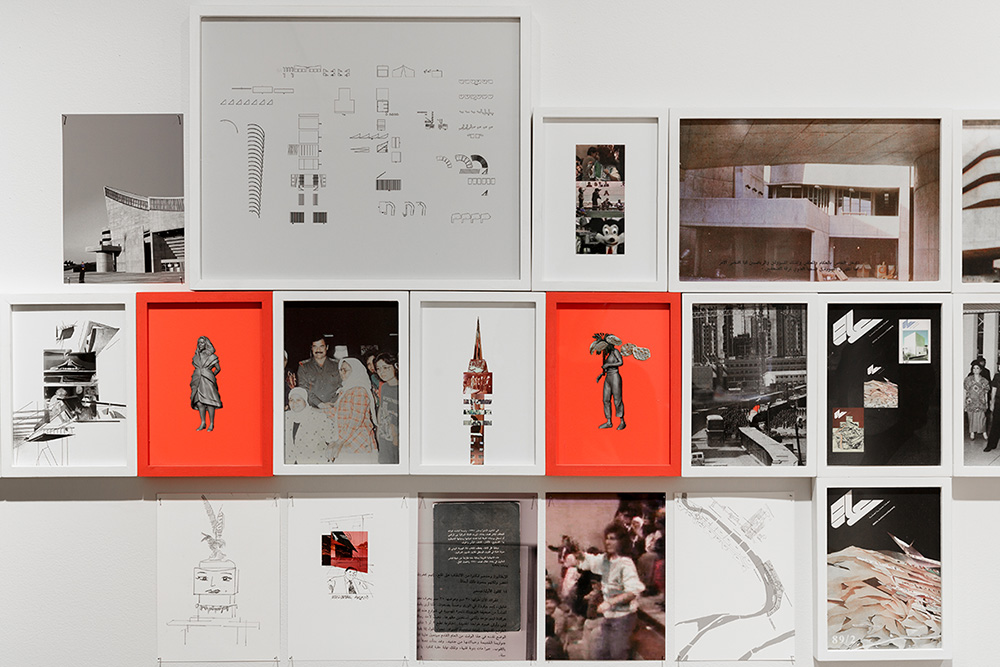 Throughout, the images and documents presented in the frieze oscillate between fact and fiction. Fahrelnissa Zeid’s painting Feast in the Desert (1957) celebrates Baghdad in a mythical portrayal of the medieval walled-city. Next to it is a letter from Walter Gropius to the architect Ellen Jawdat, politely enquiring about a missed payment. ‘I have no way of telling whether the stories actually happened as they are described in the diaries or through my interviews,’ says Younis, ‘Memory is by nature unreliable. This uncertainty is part of the story.’ By extension, Younis also highlights the precariousness of national narratives and monuments. The death of the artist Leila Al Attar, who served as the director of Saddam Centre For the Arts in the late ‘80s, indirectly features in the work. ‘Al Attar was killed by an American airstrike. The Iraqi state-run media portrayed the attack as a targeted response to Attar’s recent work that defamed the American President George Bush. She was monumentalised in death and became a national hero,’ Younis explains.

Baghdad’s ongoing political upheavals run throughout Younis’ narratives. ‘Al Radhi’s diaries describe even the little things that changed in people’s daily lives during the Gulf War and later the embargo,’ says Younis. The work is partly influenced by Younis’ own encounters with Iraqis who fled to Jordan in large numbers in 1990 – many of them students avoiding conscription – when she was an architecture student in Amman. ‘Iraqi men and women who were once heads of their work departments struggled to find jobs when they came to Jordan,’ she recalls, ‘Iraqi artists had a huge impact on the artistic discourse in Amman.’ 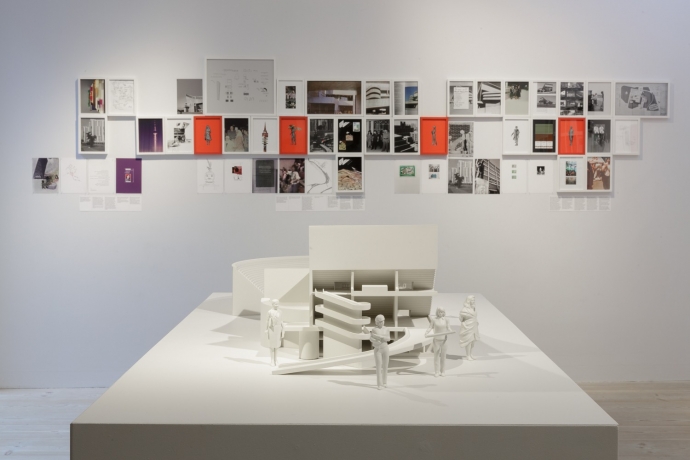 The women in Younis’ project are a barometer of their role in Iraqi culture.This is particularly poignant in today’s Iraq, where the role of women has deteriorated. While the exhibition portrays these women as proactive and influential personalities, I ask Younis if she sensed that they had struggled to get their voices heard, or if they’d been written out of Iraq’s history. ‘I didn’t approach this project with the common notion that women did not have access to the same jobs and opportunities as men. It’s not how I look, or want to look at things.’ Maher’s name, she says, appears in almost all of the building reports of the early 80s. She read that in the Iran-Iraq war, men were sent to fight or to work on military engineering and architectural projects, which gave women more prominent professional roles. ‘I agree that women are not written about enough, but this is true for many other individuals and groups’ she says, ‘All narratives are important and I’m more interested in what we can do when things haven’t been written.’

The exhibition runs till 24 March 2018 at the Delfina Foundation, London.