The exhibition ‘Sumer and the Modern Paradigm’ at the Fundació Miro, Barcelona, elicits a conversation between Mesopotamian art and the works of modern artists, particularly during the interwar period (1918-1939). Works of artists such as Juan Miró, Henri Moore, Alberto Giacommetti and Willi Baumeister sit alongside Sumerian artefacts and illustrated media of the period. By placing artworks, ancient artefacts and print cultures in dialogue, the exhibition reveals how the figuration of Mesopotamian art found its way into the Western artistic imagination. The exhibition also presents Francis Alÿs’ video work Colour Matching (2017), originally commissioned by the Ruya Foundation for the Iraq Pavilion at the 57th Venice Biennale.

Ruya speaks to the exhibition’s curator Pedro Azara about the exhibition and what ancient artefacts can tell us about art, aesthetics and modernity. 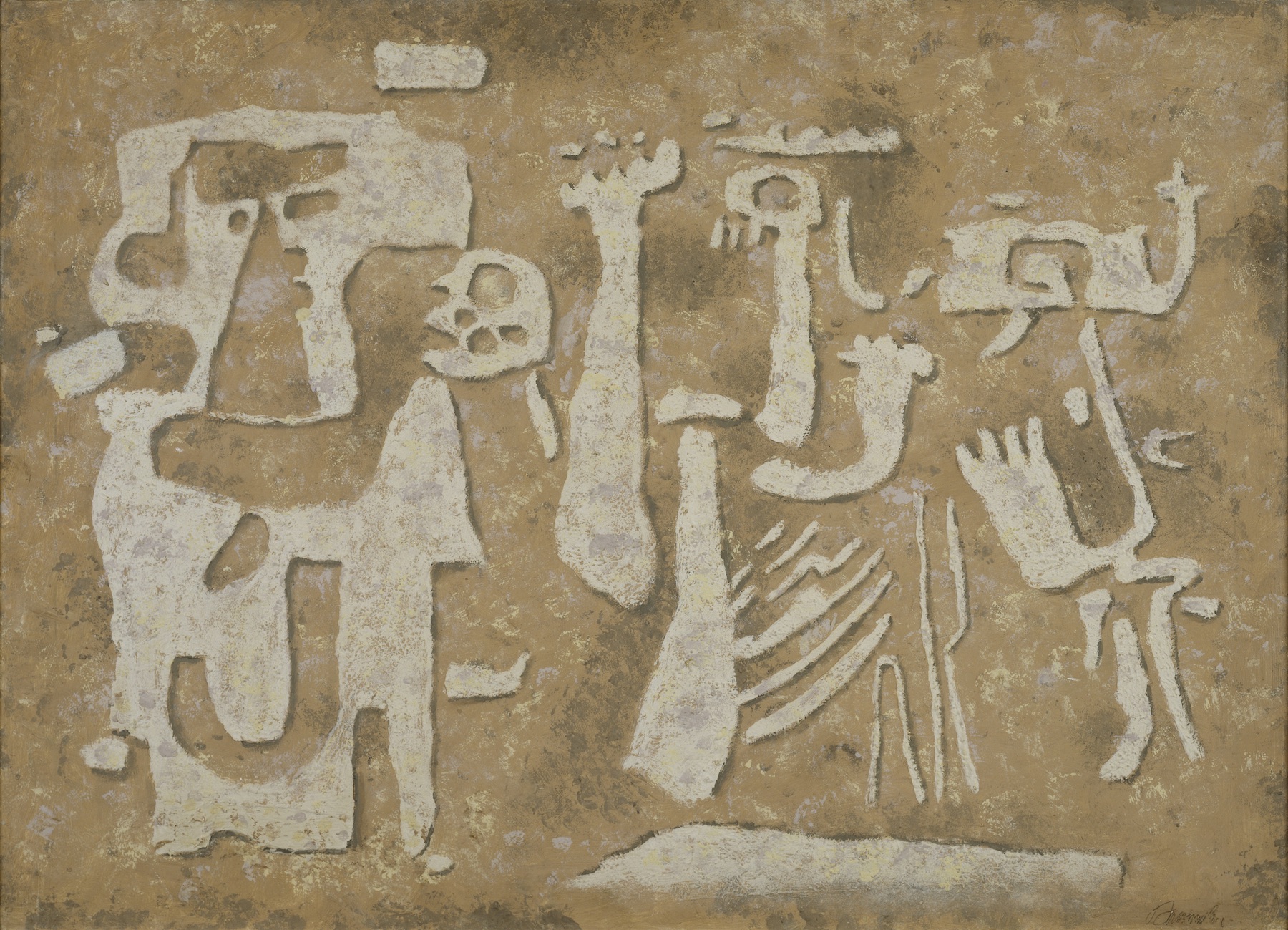 What prompted the exhibition ‘Sumer and the Modern Paradigm’ at this time?
Two years ago my colleague Marc Marín visited Son Boter, the studio of Joan Miró in Palma de Mallorca. He noticed images of Sumerian artefacts which Miró had cut out of a magazine and stuck to the walls of his studio. The pictured artefacts came from the collection of the Iraq Museum in Baghdad, and they had travelled to museums in Europe. The graffitis on the walls of Miró’s studio corresponded to these images. In turn, the artist developed these graffitis into sculptures. Miró, we discovered, had a fascination with Mesopotamian artefacts. Yet no scholar or art historian had interpreted the graffitis and the photos in his studio in this way before. Instead, critics have placed his work within a Western art historical tradition, which includes the Graeco-Roman antiquities. 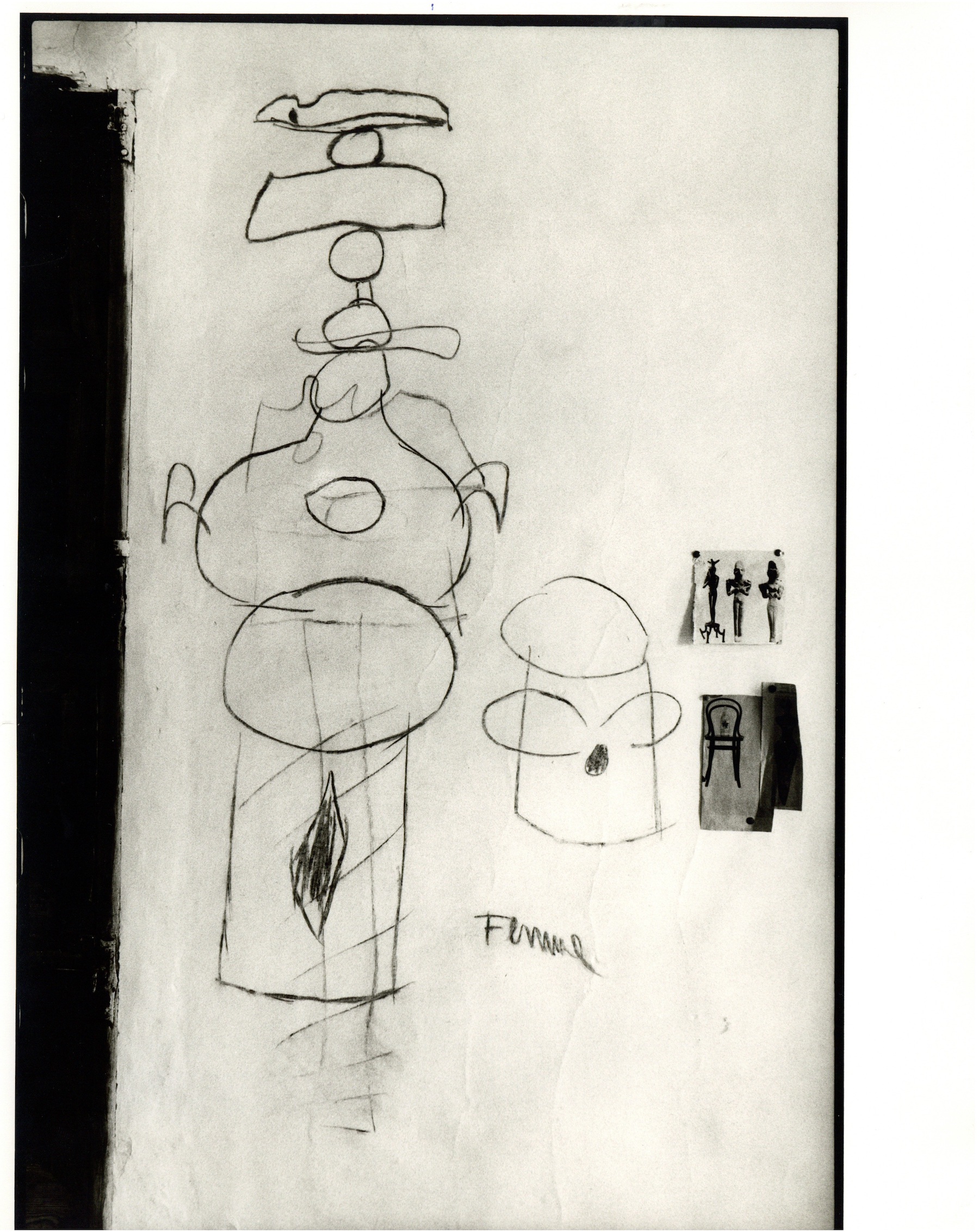 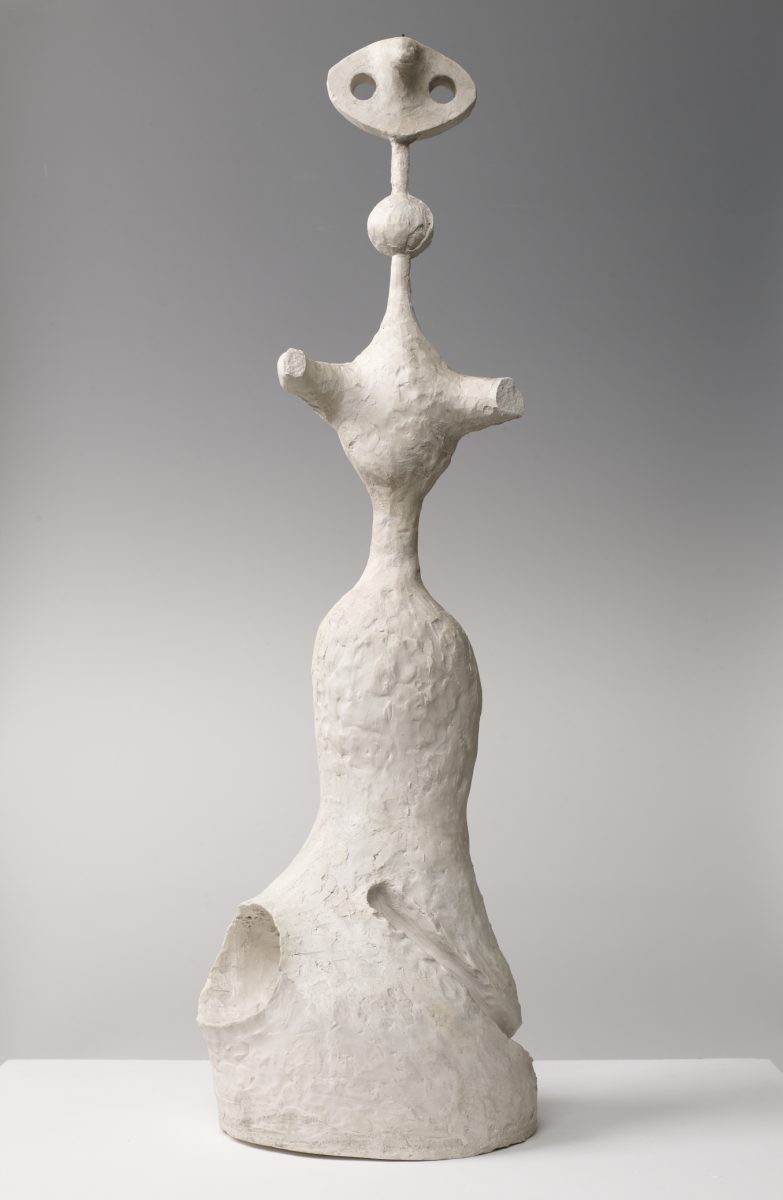 Modernists drew inspiration from the ancient and ethnographic artefacts housed in Western universal museums like the British Museum in London and the Louvre in Paris. Why did you focus specifically on the influence of Sumerian art?
Important archaeological excavations took place in Iraq in the 1920s and 1930s, such as Leonard Woolley’s excavations of the Royal Tombs of Ur and Henri Frankfort’s discovery of religious limestone statues in the Diyala Valley. Yet artists had little access to the Sumerian artefacts that were being collected by European museums. When it came to Iraq, institutions like the British Museum and the Louvre presented Assyrian artefacts, which were monumental, large and spectacular. These museums gave less importance to Sumerian artefacts which were cruder, smaller, often broken or chipped. Yet it is this perceived primitivism of Sumerian art which also attracted artists.

The exhibition also includes clippings from magazines, art journals and exhibition catalogues. How important were these print cultures in connecting artists to the ancient world?
The artists often never saw the physical artefacts and came across them through the photographs and essays that were published in the media. Woolley and other archaeologists publicised their discoveries through illustrated press coverage in order to secure private patrons for their excavations. The French Surrealist Georges Bataille also wrote about Mesopotamian artefacts in modern art and art theory journals. In 1935 the French journal Cahiers d’Arts published the issue ‘L’Art de la Mésopotamie’, which was widely read by modern artists such as Giacometti. The issue included the Argentine photographer Horacio Coppolla’s black and white photographs of masterpieces from the Louvre and the British Museum.

How did modernist photography of the period shape the way that artists interpreted these artefacts
Coppola’s portrayals had a direct impact on how the artists saw and interpreted these ancient artefacts. The photographer is better known for his portrayals of urban life, and his approach to the artefacts was modern. He did not photograph the entire statues but gave a partial view, focusing on certain figurative aspects such as the shape of the eyes. His images are almost abstract: the viewer can’t tell which culture they come from. Modern artists interpreted artefacts from the perspective of their own time. These artefacts were produced as functional objects, often with magical properties and religious significance. Yet we look at artefacts in the same way that we admire art works. Modern artists shaped this relationship.

Which characteristics of Sumerian artefacts do you think inspired these artists the most?
Many aspects of the artefacts inspired artists from their figural representations to cuneïform script and myth. The sculptor Henri Moore praised the stillness and ‘conserved energy’ in the sculptures of Sumerian worshippers and of Gudea, a ruler in Southern Mesopotamia in the 21st century BCE. Moore tried to recreate this tranquility in his own sculptures, drawing on physical aspects of these artefacts such as their large eyes and the shape of their heads. Meanwhile, the French poet Henri Michaux created a series of imaginary writings based on Sumerian cuneiform script. Michaux considered cuneiform to be one of the first examples of writing in the history of mankind, and he believed that the script came closest to communicating what a thing is. The German artist Willy Baumeister was particularly interested in the portrayals of violence and conflict in the epic of Gilgamesh. It was a way for him to understand what was going on in Germany in the interwar period and in WWII. 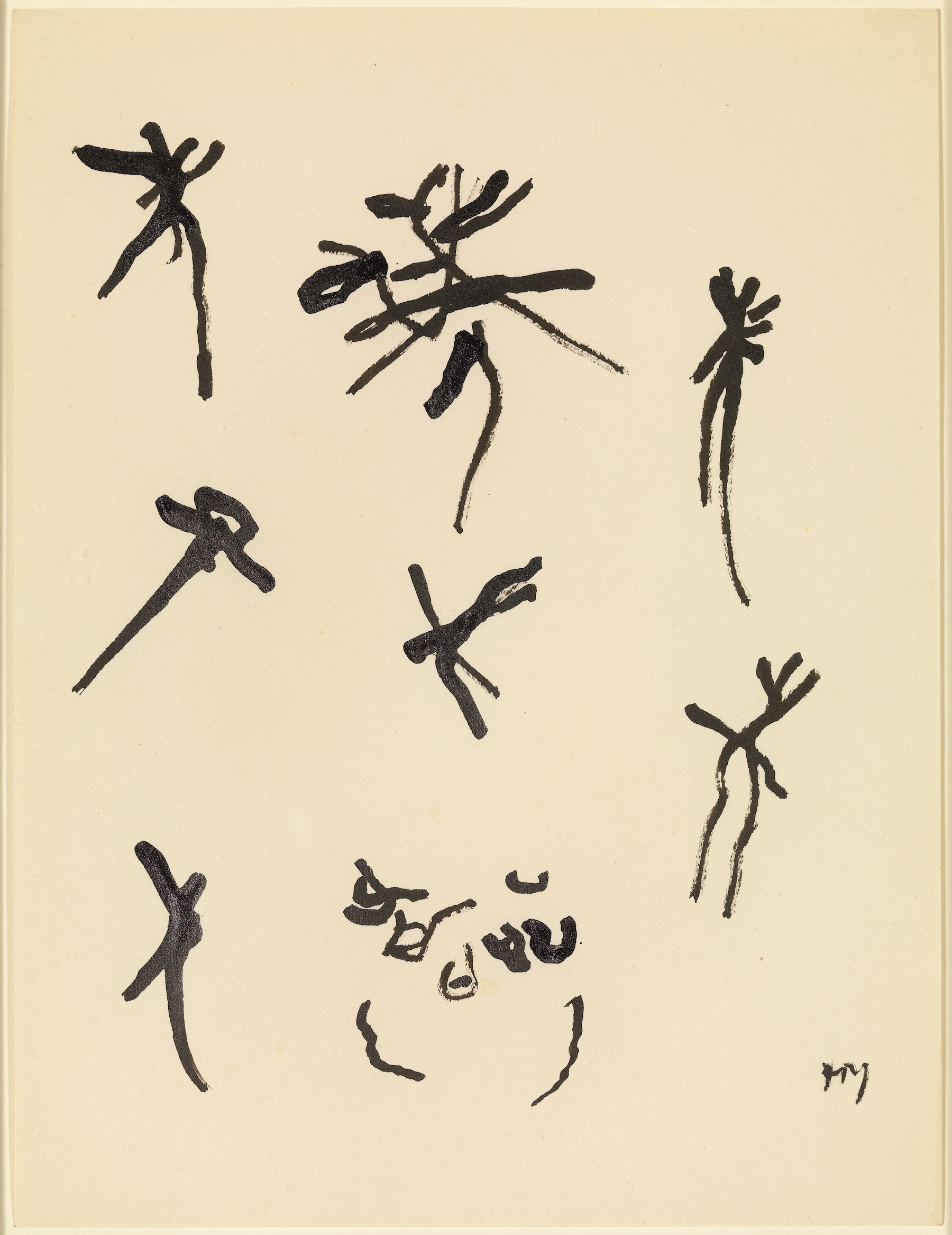 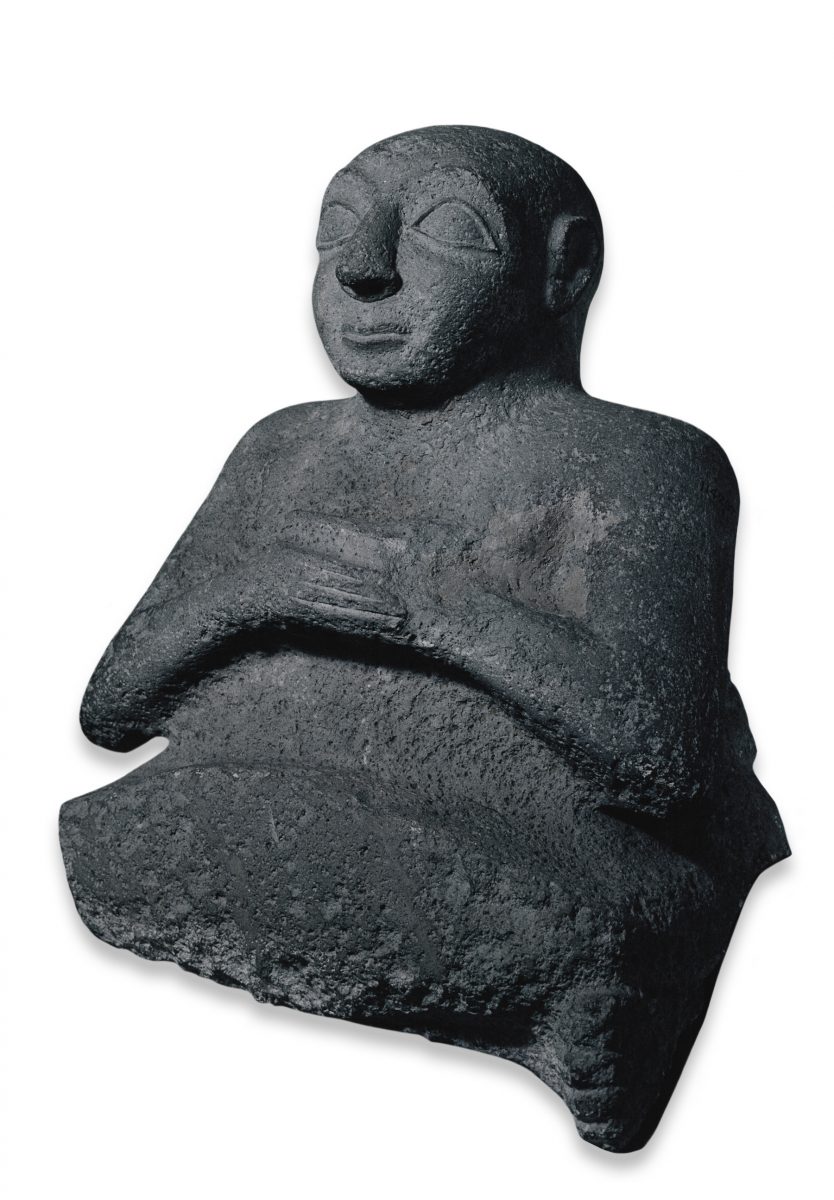 Stone statue of a seated figure praying, (c. 2500 BC) The British Museum.

What is your favorite piece in the presentation at the Fundació Miro?
We’ve presented the drawing of a head of Gudea by Giacometti, alongside the original artefact which is currently housed at the Louvre. However, we know that the artist copied a plastic reproduction of the head, and that he came across the artefact in a photograph by Copolla from the Cahiers d’Art. We’ve also presented the photograph and pages from the Cahiers. 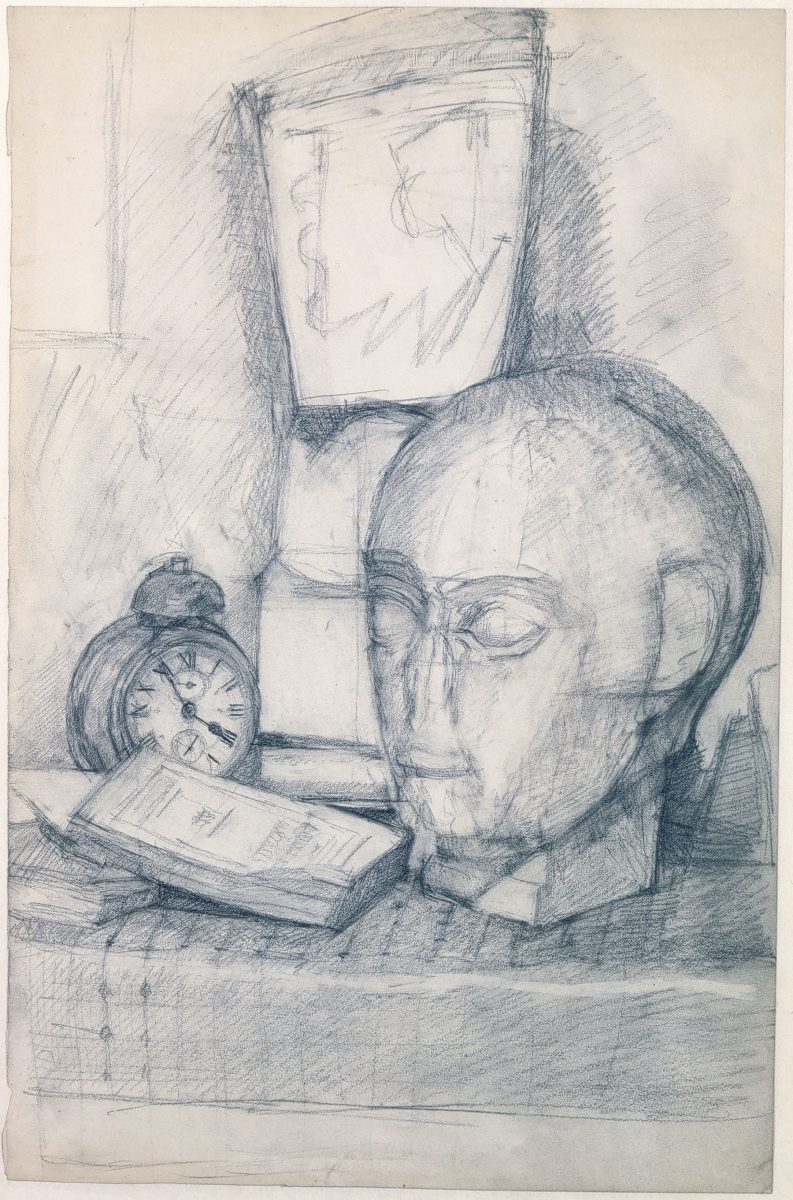 The only contemporary art work in the exhibition is Francis Alÿs’s Colour Matching (2017). The artist filmed this piece while embedded with the Peshmerga in the first weeks of the Battle for Mosul in November 2016. Why did you chose this work in particular?
Colour Matching shows an artist trying to produce an artwork in a place that looks like an archaeological site, but which is in fact a war zone. The piece highlighted questions that we had about the contemporary relationship between art and the ancient world of Mesopotamia. How does ancient culture inspire artists today? Does the lure of the Near East persist in their imaginations? How can contemporary artists engage with the region and its current wars? 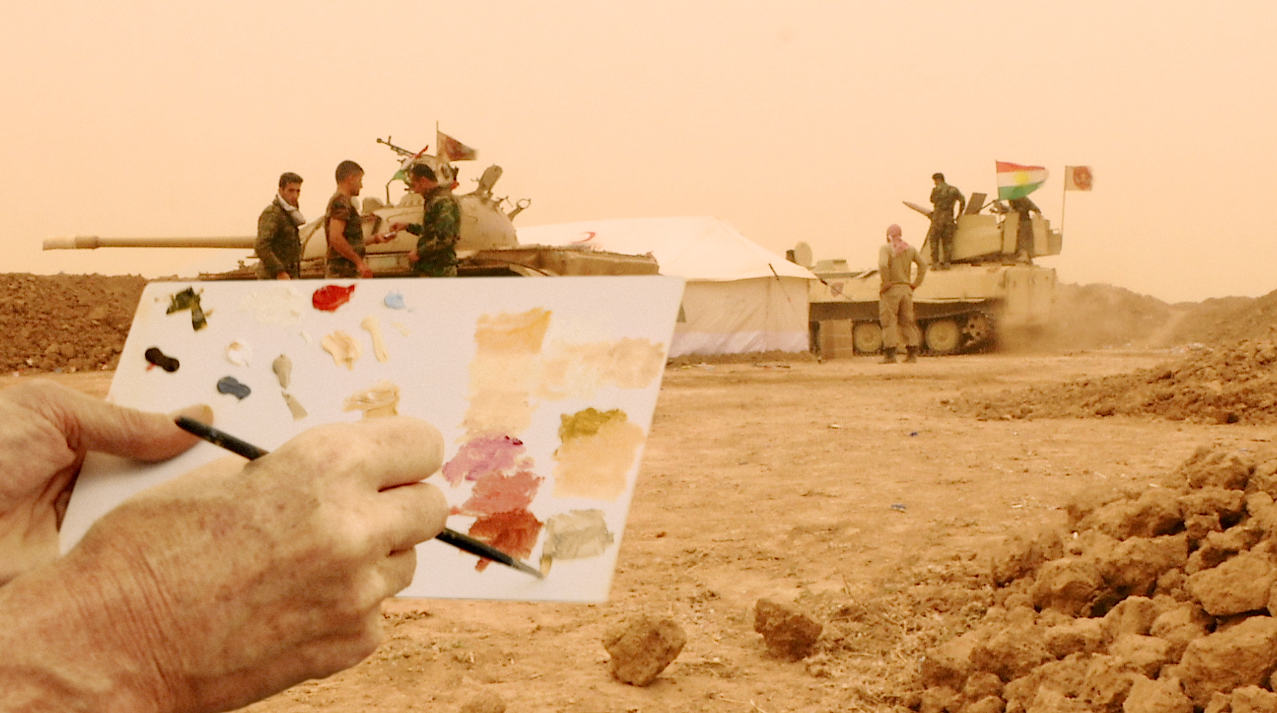 Archaeological excavations of the 20s and 30s took place when the Near East was divided into Western colonies and mandates. How did artists of the period respond to this political context?
Few of the artists who engaged with artefacts were aware that the works were a consequence of colonialism. Fewer even saw these artefacts as symbols of oppression. Writers like Bataille and the French surrealist Michel Leiris alluded to this in their texts, but from our research, it doesn’t seem that artists like Giacommetti or Moore took this into consideration.

The interwar period and the culmination of WWII lead to the emergence of key questions about dealing with art and artefacts in times of conflict. What can we learn from this and apply to today’s context?
After WWII, many debates and questions surfaced about the safeguarding of artefacts in times of conflict. To what extent should we restore these lost or stolen objects? Should we reproduce replicas? Should we preserve some of the destruction? Most of Warsaw was destroyed in 1944. The Old Town has been entirely reconstructed in its historic urban and architectural form. Frankfurt has recently initiated the reconstruction of the DomRömer Quarter in the city’s old centre. I am not satisfied with this approach because it prioritises the historic image of the city, while overlooking other factors. In Rotterdam they decided to create an entirely new, modern city. Such questions about post-trauma recovery are also present today in Iraq. Ruins help us understand that what we can’t live forever. They also remind us that as human beings, we are capable of great violence and atrocities. Likewise, they show that art itself is transient, and not made for eternity.

‘Sumer and the Modern Paradigm’ runs until 21 January 2018 at the Fundació Miró, Parc de Monjuïc, 08038 Barcelona.