Shirwan Fatih (born 1974, Iraq) lives and works in Sulaymaniya, Iraq. He is among a new wave of artists in Sulaymaniya to work with site-specific work, installation, and video art. Fatih focuses on the education system in Iraq, and works closely with schools and schoolchildren to produce his work. For the project Rubber (2009), Shirwan collected rubber erasers from children from six different grades at an elementary school in Sulaymaniya. The piece captured the struggle between nature and nurture, and the processes of repetition and correction in the learning systems designed for children. He speaks to Ruya about this, and his recent work.

As an artist, what drew you to the idea of working with schools and school children?
A school is a public space and an inherent part of the community that it belongs to. I focus on education in order to talk about the wider problems that we face in Kurdistan and in Iraq. With my earlier project Rubber (2009), I was interested in how education conditions our behaviour as individuals and creates social norms. For example, everybody makes mistakes, but people seldom admit to them, especially people in positions of power, like politicians and leaders. Yet primary school kids admit to their mistakes. For Rubber, I collected children’s rubbers from six different grades at a primary school in Sulaymaniya. The older the children were, the less they used their rubber erasers. My questions were: when adults make mistakes, why do they hide them? Where does this sense of shame come from? 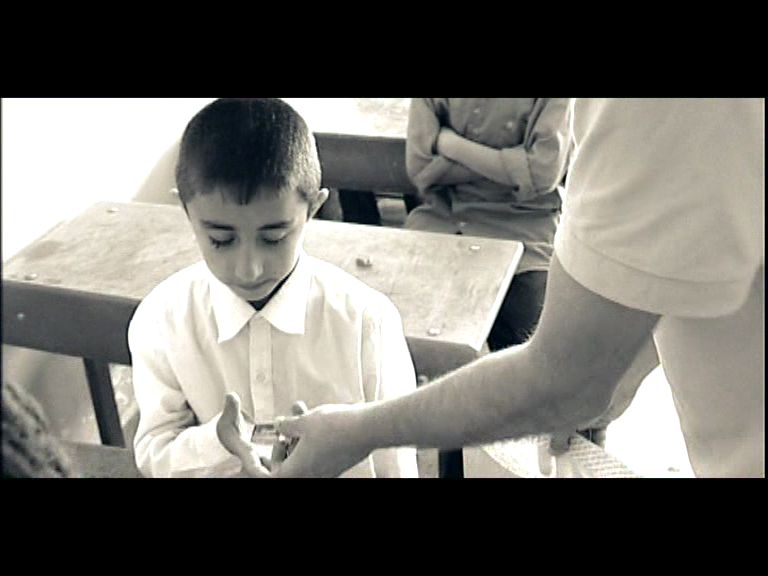 Shirwan Fatih’s project Rubber (2009) is documented in a video of the same name. Courtesy of the artist. 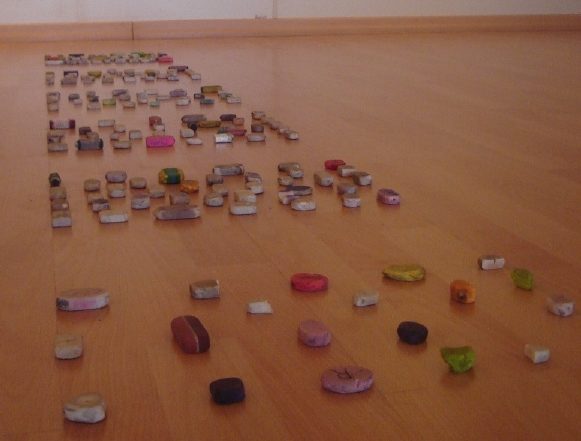 Shirwan Fatih, from the project and installation Rubber (2009). Courtesy of the artist.

As an adult, to what extent are you drawing on your own experience of school and childhood?
Education in Iraq today is treated like military discipline. It is a continuation of the same education system that grew out of Saddam’s dictatorship for decades. I experienced it when I was at school in the 1980s. My work is a reaction to my own experience which felt as if I was in a military camp being drilled in propaganda, and not a child in school. We all experienced this. I believe that this underlying violence in our education system is a legacy of Saddam’s Ba’ath regime. The focus was on wars; even primary level math books had illustrated rockets and tanks to teach us how to count. In my performance and installation The Coat of My Father (2017), I re-enact this notion of the educator as a patriarchal strongman, and highlight the continuing effects of this across generations.

How have you developed these concepts in other recent work?
I’ve been looking at the regimentation and organisation of time in our education systems, which extends to the way our societies are managed in the post-industrial age. In my new installation, The Dust of Learning (2016), I reproduced a timetable on a black board, and hung school bells that I cut out to resemble the arms of a clock. I exhibited it at the group show ‘Clamour’, curated by the artist Sherko Abbas at the Institute of Fine Art in Sulaymaniya. The piece asks, can learning really be controlled by time? Those who want to learn will do it anyway, at any point of the day and often spontaneously. In my opinion, this regimented time is a weakness in our educational system. 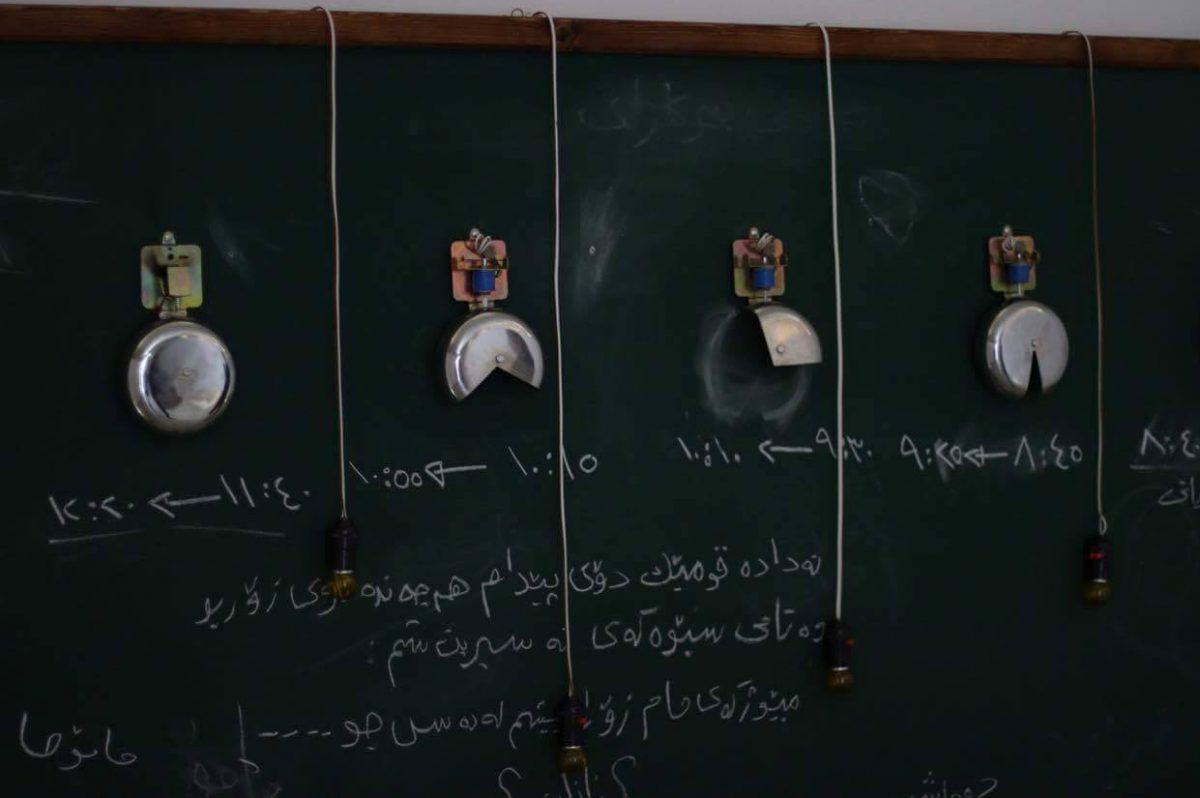 Shirwan Fatih’s The Dust of Learning (2016). Courtesy of the artist. 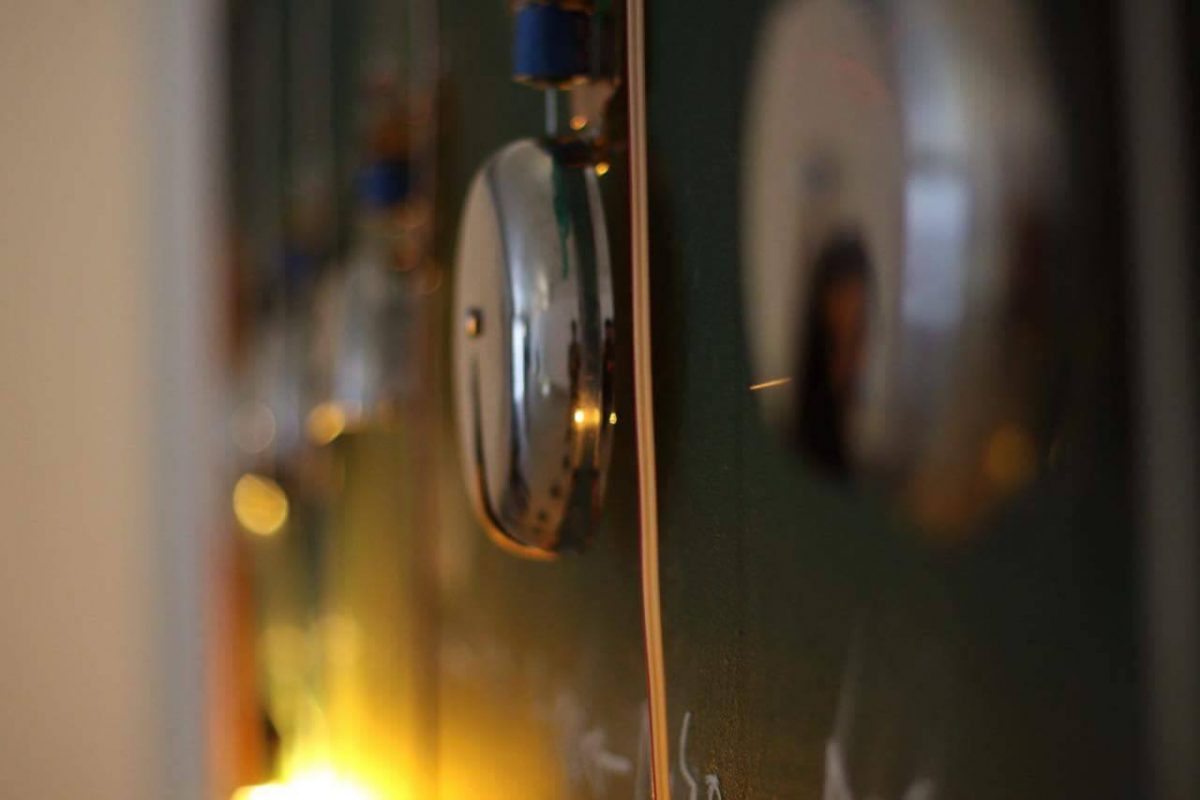 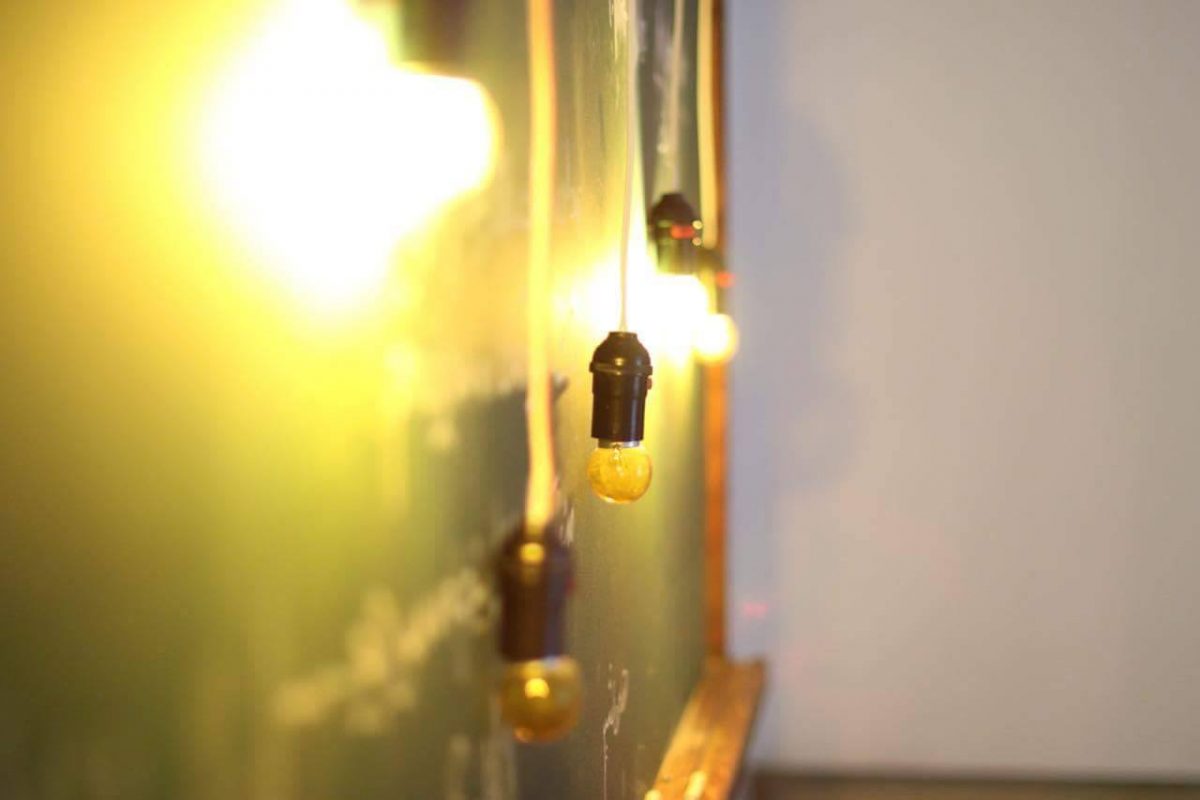 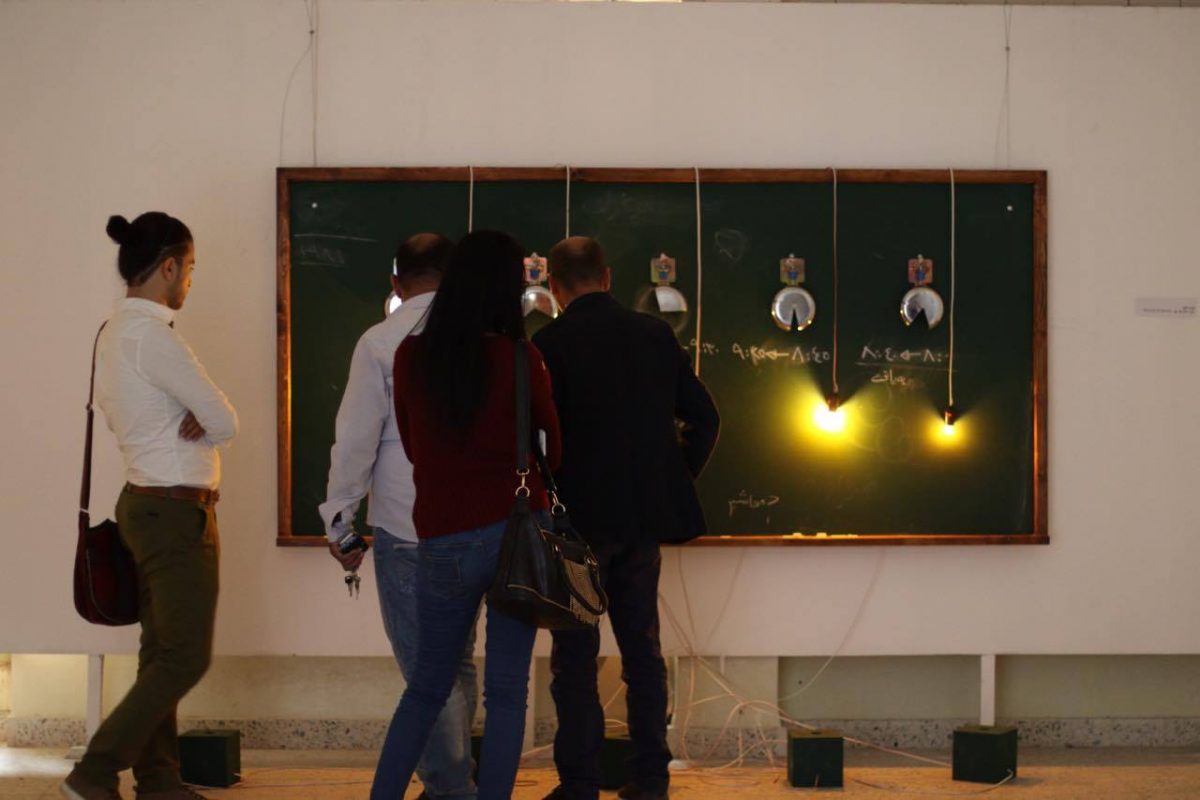 The themes that you address, such as the division of time, and the materials that you use, such as a chalkboard and rubber erasers, could belong to a school anywhere in the world. Why focus on schools on Iraq?
According to research papers I have read, a healthy education system encourages individuals to pursue their ideas and rectify their mistakes. Those individuals are more likely to bring about change and contribute to their communities. I believe that our current education system has no impact on society in Iraq, and as an artist, I want to highlight this.

Iraq was known to have a strong education system up until the 1980s. What do you think contributed to its decline?
The current education system in Iraq is relatively new compared to those in Europe. The first schools were introduced in Iraq in the 1920s, after the King took power. The Alliance School for Girls was set up in Baghdad in 1921 and later the American Jesuits established the Baghdad College in 1932. Though these schools were often denominational, they accepted pupils of all faiths. Before that, education took place within Iraq’s religious institutions. Iraq’s modern educational institutions suffered as I mentioned because of the wars we have been in since 1980, and due to the propaganda of the Ba’th regime. Indoctrination became the primary driving force of education, and not learning. Things became worst during the sanctions and have since stagnated. Our educational policies and syllabi have not changed in over thirty years, making this system at the very least archaic. There have been some reforms but in my opinion they are meaningless formalities. I have not seen any actual change.

Do you consider yourself an activist in society?
As an artist, I have to work with people, but I don’t consider myself an activist. I am asking questions and addressing them to the public, both in my work and day-to-day conversations. In turn, they will have questions for me. It is a reciprocal process.

How do you conceive of the concept of the child, and why is this important for you as an artist?
Children are sensitive, and as my projects show, their behaviour and understanding of the world can easily be molded or manipulated. When I worked on Rubber, I tried to create a happy and comfortable environment for the children, while pushing them to participate and ask questions. I want them to think critically and engage with the project – as opposed to the regimented teaching that they get at school. I made it clear that there was no correct or wrong way to participate. If they made mistakes they could just continue and not be ashamed to admit them. Part of this was fuelled by the nostalgia that I have for my own childhood. 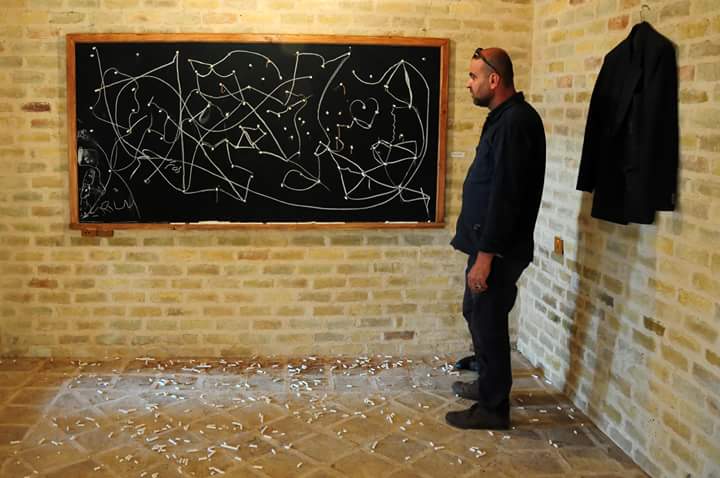 Shirwan Fatih, The Coat of My Father (2017), performance and installation. Courtesy of the artist.

What challenges do you face as an installation artist working in Sulaymaniya?
My work wouldn’t be worthwhile if I didn’t face any challenges. For Rubber, I had to get permission from the teachers in order to intervene in their classrooms and work with the children. Most school teachers in Sulaymaniya are unfamiliar with contemporary art practices and they had trouble understanding the project at first. Working with children was another challenge. Finally, it is difficult to be recognised and to build a reputation as a conceptual artist in Sulaymaniya. This affects all artists in Iraq. I am trying to overcome these difficulties and pave the way for the new generation.