Sakar Sleman (b. 1979, Sulaymaniya) is a painter and installation artist who lives and works in Sulaymaniya. The artist has been commissioned to produce new work for ‘Archaic’, the Iraq Pavilion at the 57th Venice Biennale. Her work focuses on political, religious and social issues in Iraqi society and on women in particular. Many of Sleman’s installations have been site-specific, such as her land art project on the Goyzha and Azmar Mountains above Sulaymaniya in 2014, and the exhibition ‘Two Generations’ in the yard of the Amna Suraka Museum. Through several conversations with the artist, Ruya mapped the sites and places in and around Sulaymaniya where she has produced her work. What emerges are Sleman’s personal relationships with these sites that also evoke collective memories about women, war and trauma. 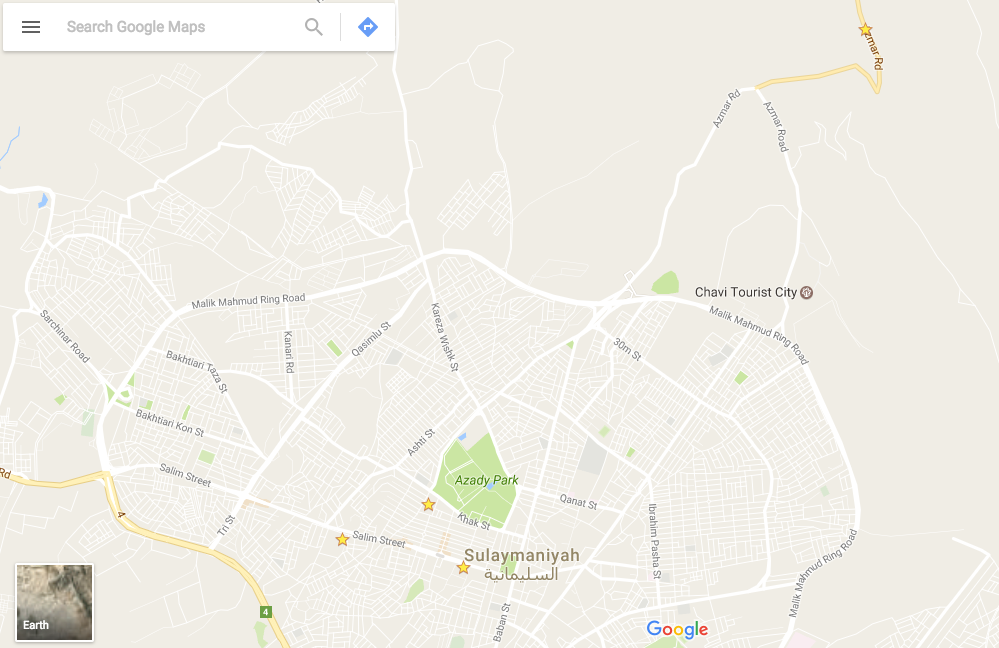 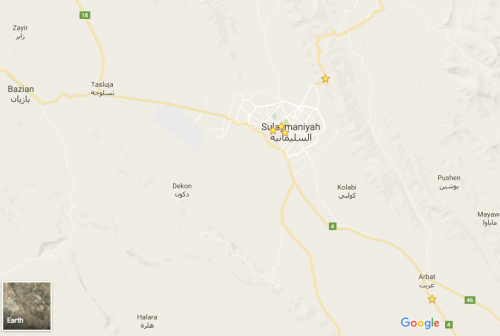 The road to Goyzha Mountain Sleman’s unnamed piece known as Land Art (2014) was set along the main road leading up to the Goyzha and Azmar Mountains above Sulaymaniya. A minimalist symbol made of stone and ground chalk was drawn directly on the soil of a hill facing the road. ‘These mountains have a special significance for us in Sulaymaniya,’ Sleman explains ‘People drive up there with their families on weekends and holidays to have picnics. It is where the Peshmerga hid to defend our land in the 1980s. In 2014, we felt we needed the Peshmerga more than ever’. Sakar recalls many people stopping as they were driving up the mountain to see the work, which has since been washed out by the rain. It took a collective effort to produce the land art installation. Though the symbol appears small and simple from afar, it is in fact several meters wide. ‘Moving away from the studio and out onto the mountain road allowed me to produce work on a larger scale,’ Sleman explains ‘and to use these earth materials that children play with’. The experience of creating the work took her back to a childhood memory, when she and her sister built small houses to play in with soil and stones. ‘When I touch the soil, stones and dust, I feel I am going back to my origins in nature,’ says Sleman. 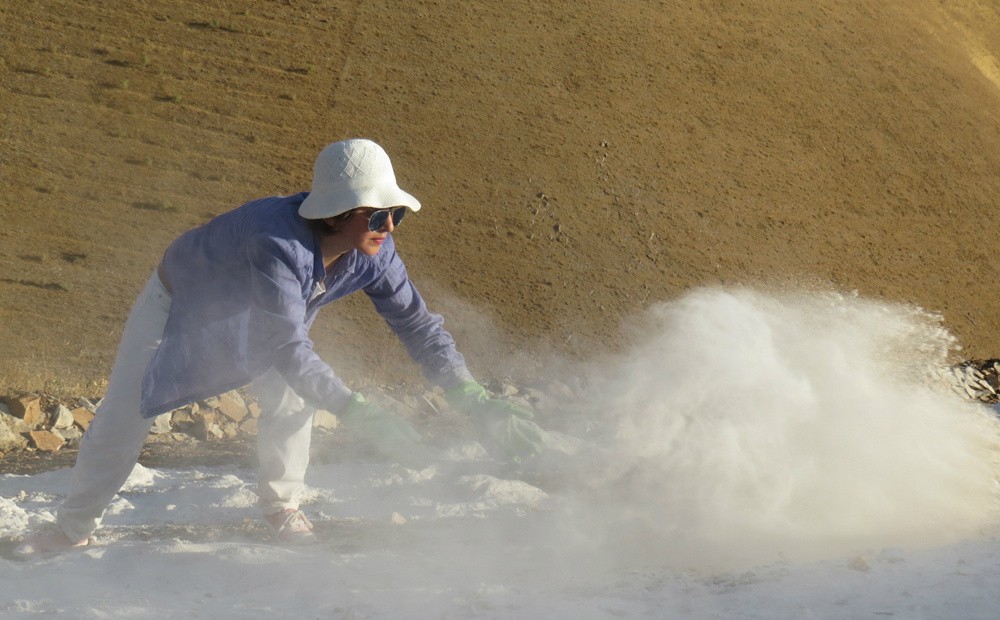 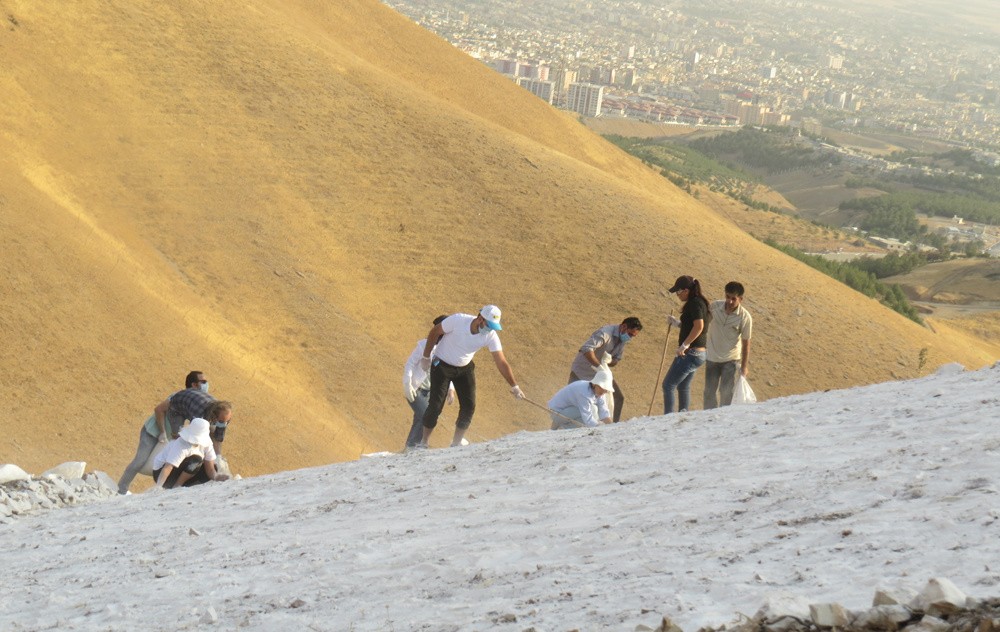 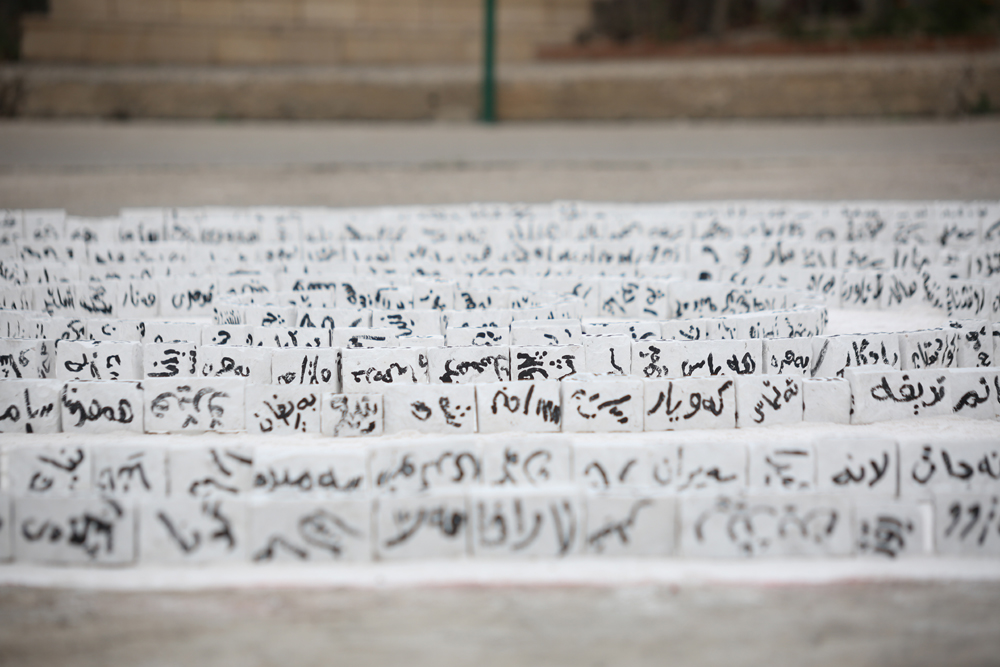 Two Generations, 2015 at the Amna Suraka. Courtesy of the artist.

The Amna Suraka is the former northern headquarters of Iraq’s intelligence agency, where thousands of Kurds were tortured and executed during the Anfal campaigns of the 1980s. Its name means ‘Red Security’ and the building was converted into a museum in 2003. ‘When I was a child, there were many horror stories about the Amna Suraka,’ Sleman explains. ‘I visited the building for the first time with my family in the mid-1990s. I was 15 at the time, and I was scared. I still get shivers when I see the bullets holes there. Sleman’s first installation in the yard of the museum, Two Generations (2014), was dedicated to the women who were imprisoned and raped at the Amna Suraka. ‘Often, these women had a father, brother or husband in prison, so they became suspects themselves. Many of them had children as a result of rape. When they got out of prison, they were rejected by their own communities’ says Sleman. The artist painted the first names of these women prisoners on bricks, which she laid out in the museum’s yard. Sleman met a former prisoner at her local yoga centre. ‘We never spoke about her experience, but I could see the pain in her eyes,’ says Sleman, ‘I dedicated one of the bricks in the exhibition to her, but I don’t know if she came to see the show’. 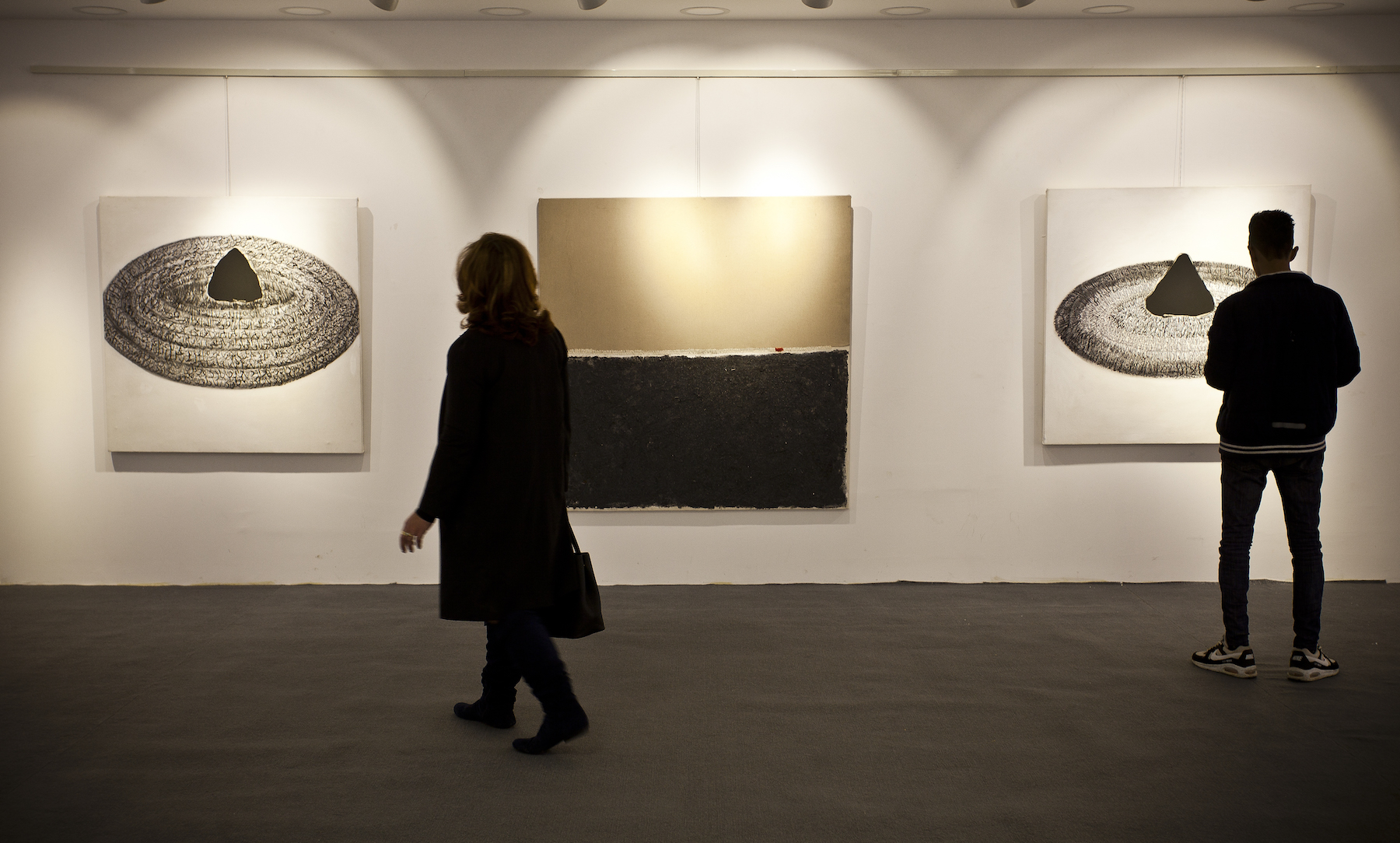 Today, the Amna Suraka hosts regular exhibitions for local artists. This includes Sleman’s recent solo show ‘Dark and Light’ (2017), a series of new paintings, sculptures and land art. The works were made using earth and construction materials such as gypsum, coal and stone. ‘These are materials that we use to build a house,’ Sleman says ‘I paint and built things with these materials’. Unlike Two Generations, the series is more intimate and inward looking ‘ Recently, I was exploring my relationships with society, with my husband and family,’ says Sleman ‘Between light and dark, between black and white, there is hope. I don’t use colour, because I can’t read any emotions in it’. 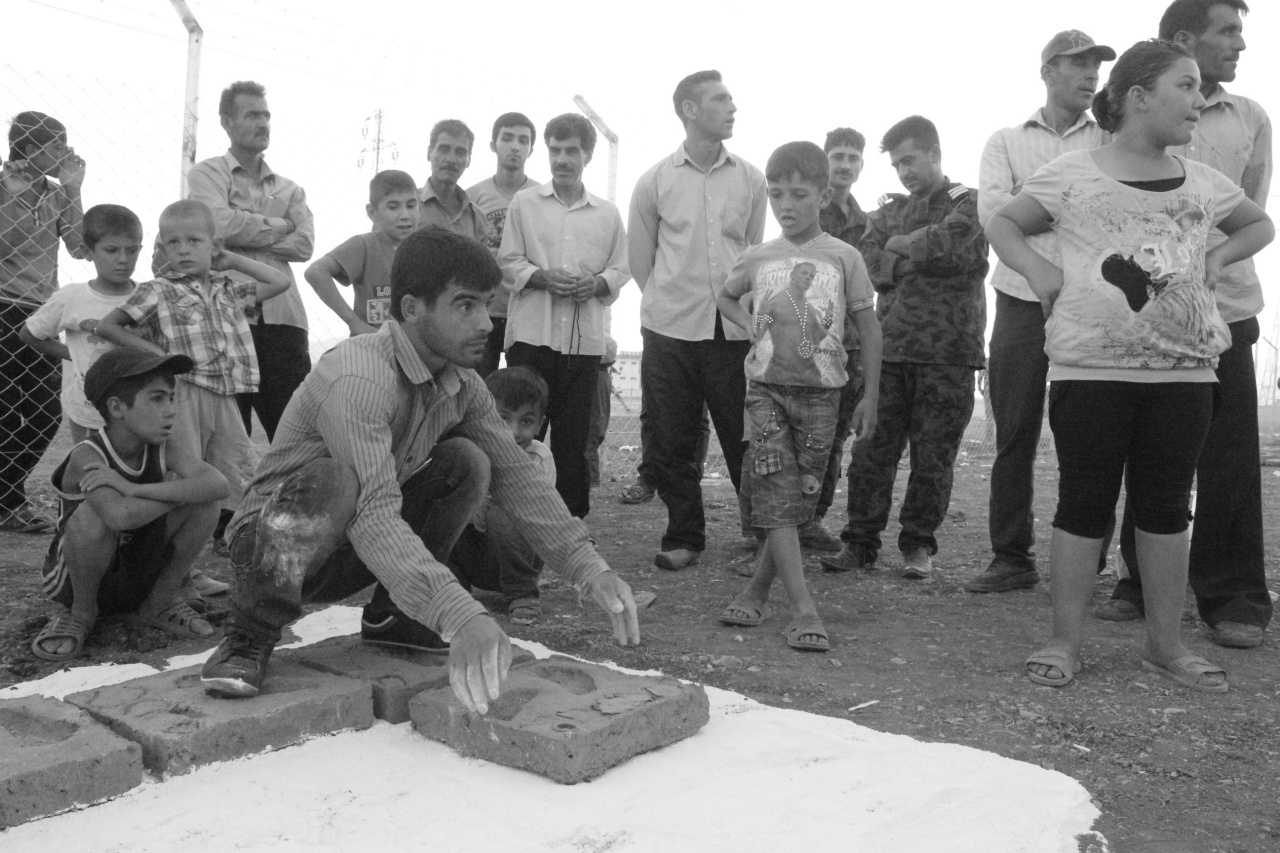 Residents of the Arbat refugee camp participate in the making of Mass Migration (2013). Courtesy of the artist. 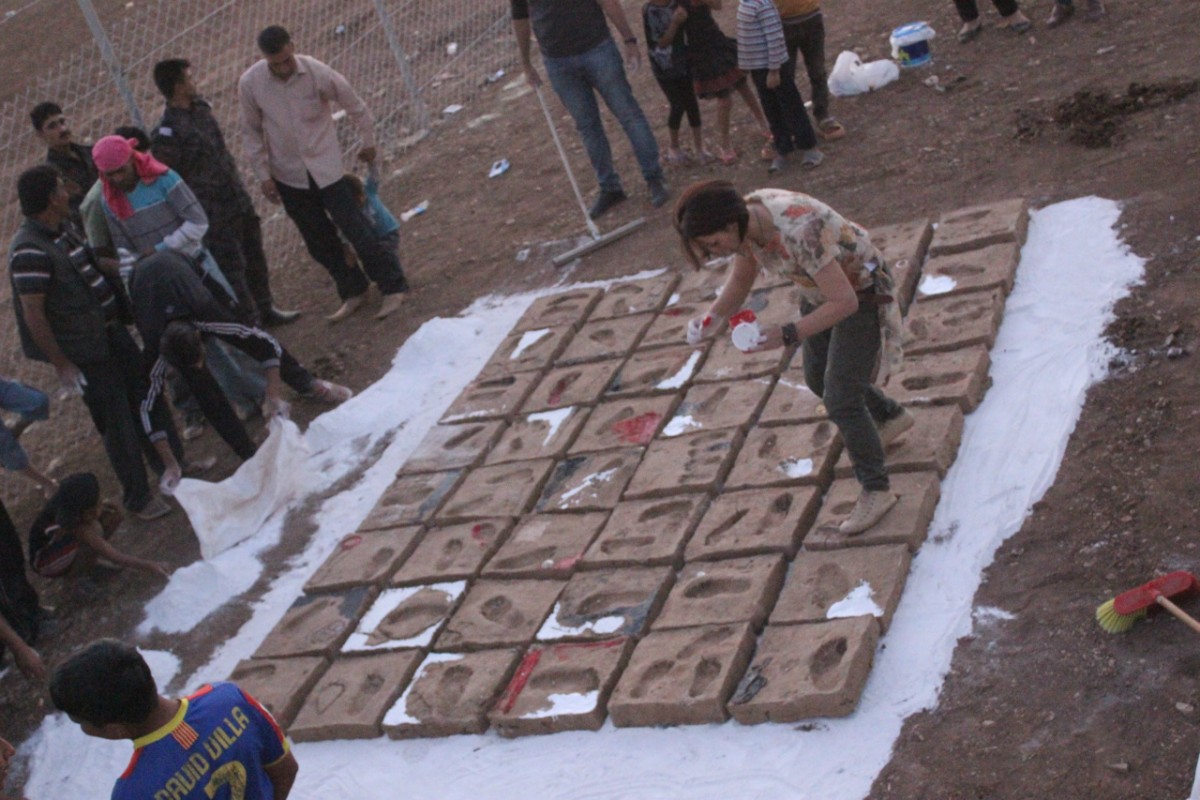 Sakar Sleman adds her own footprints to the Mass Migration installation. Courtesy of the artist.

In 2013, Sleman created the installation ‘Mass Migration’ (2013) inside the Arbat refugee camp, which shelters over 8,000 registered refugees from Syria. Sleman recalls the influx of Syrians who came to Iraq after 2011. ‘We could see the refugees walking into Sulaymaniya,’ she says. In order to symbolise their journey on foot, she asked refugees to press their footprint on freshly poured red bricks. ‘At the time, the refugees weren’t allowed to leave the camp, so we did everything on site,’ she explains, ‘and the residents of the camp helped me produce the clay, move the bricks and create the installation. One of the residents had been a brick-maker in Syria’. The installation was first exhibited in the camp, and later transferred to the Sardam Gallery in Sulaymaniya. 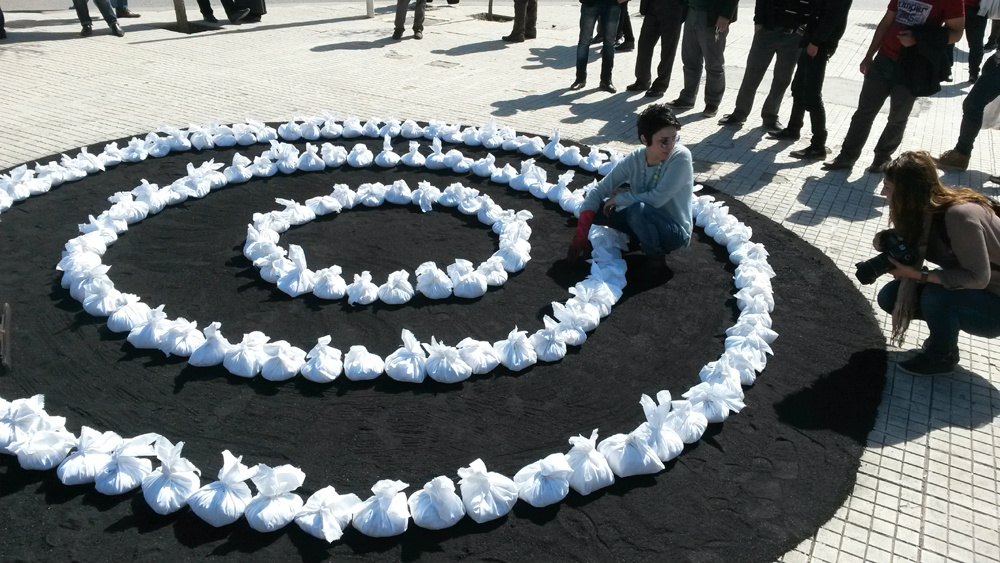 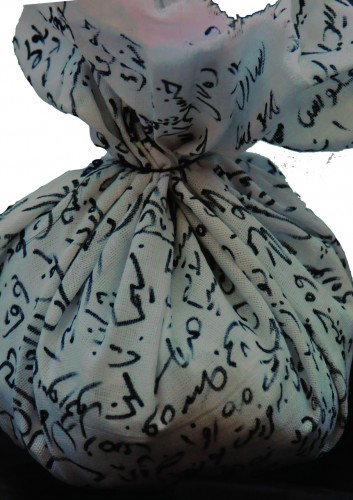 A white fabric bundle commemorating the Yezidi Women who were killed and assaulted by ISIS. Courtesy of the artist.

Yezidi Women (2015) is an installation commemorating the Yezidi women who were killed or sexually abused by ISIS. It was exhibited on International Women’s Day in a public square, by Salim Street in downtown Sulaymaniya. ‘It was important to do it in a crowded public space because of the subject matter. I wanted to touch everyone’s hearts, not just the limited audience of an art gallery,’ Sakar explains, ‘No woman should go through the pain that these women were subjected to. We are all the same, no matter where we are from,’ says Sleman. The artist reproduced the fabric bags traditionally used by women in Kurdish villages to wrap their belongings in a bundle that was easy to carry when they left the house. ‘Whether they were going out for a few hours or days and weeks, they took these bags with them,’ Sleman explains. Drawing on the Yezidi tradition of wearing white, Sleman created the bags out of white fabric that she bought from the local bazaar. 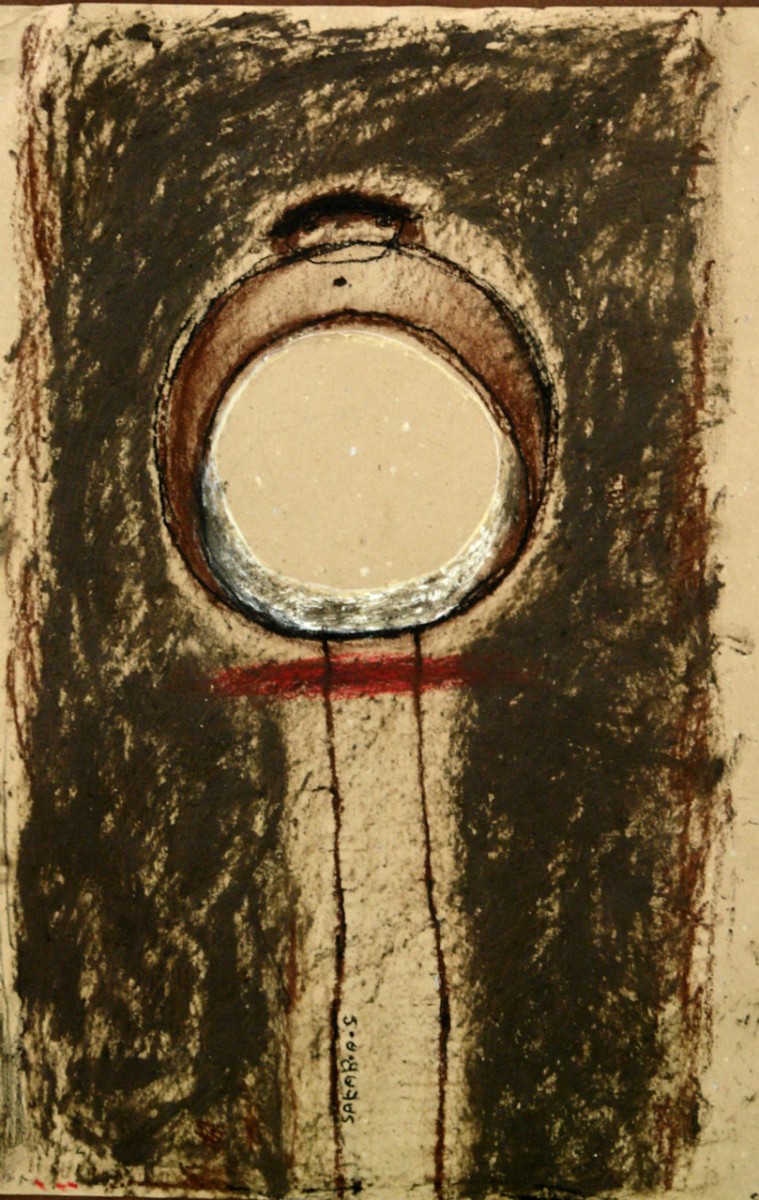 In 2008 the artist exhibited a series of drawings about childbirth at the Sardam gallery in Sulaymaniya. These intimate and visceral drawings, as art historian Kalliopi Minoudaki writes for the ‘Archaic’ catalogue, expressed the ‘trauma of childbirth’ with a ‘rudimentary language of the body.’ The artist used ‘a vocabulary of perfect and imperfect circles’ to highlight ‘bodily estrangement, duplication and rupture’. ‘It was clear to everyone what the works were about’ says Sleman, ‘even my friends who weren’t artists understood them and empathised.’ The physical trauma that women undergo during childbirth is not easily talked about in Sulaymaniya. ‘The poet Shirin Kaf congratulated me,’ Sleman recalls, ‘she said ‘Well done, I have never talked about women’s pain so publicly.’ Sleman chose to exhibit in the gallery for practical reasons: ‘the paintings would not have been safe or easy to hang in a outdoor space.’ Yet the enclosed space of the gallery also seems fitting for an experience that is once universal and shrouded in privacy.