“Kites float in the sky and embody our desire to free ourselves in flight. But their movement is neither spontaneous nor free, they always return home”. In a new series by the photographer Akam Shex Hadi, the artist has photographed his subjects, anonymous women, men and children of the city of Sulaymaniyah, surrounded by barbed wire which symbolises national borders. Outside of the perimeter of the wire, are colourful kites, handmade by the artist. They depict the dreams that lie beyond it. The project, entitled ‘Homeland, Exile’, draws on the waves of mass displacement and migration as a result of conflict and turmoil, which the artist has witnessed first-hand in Iraq. 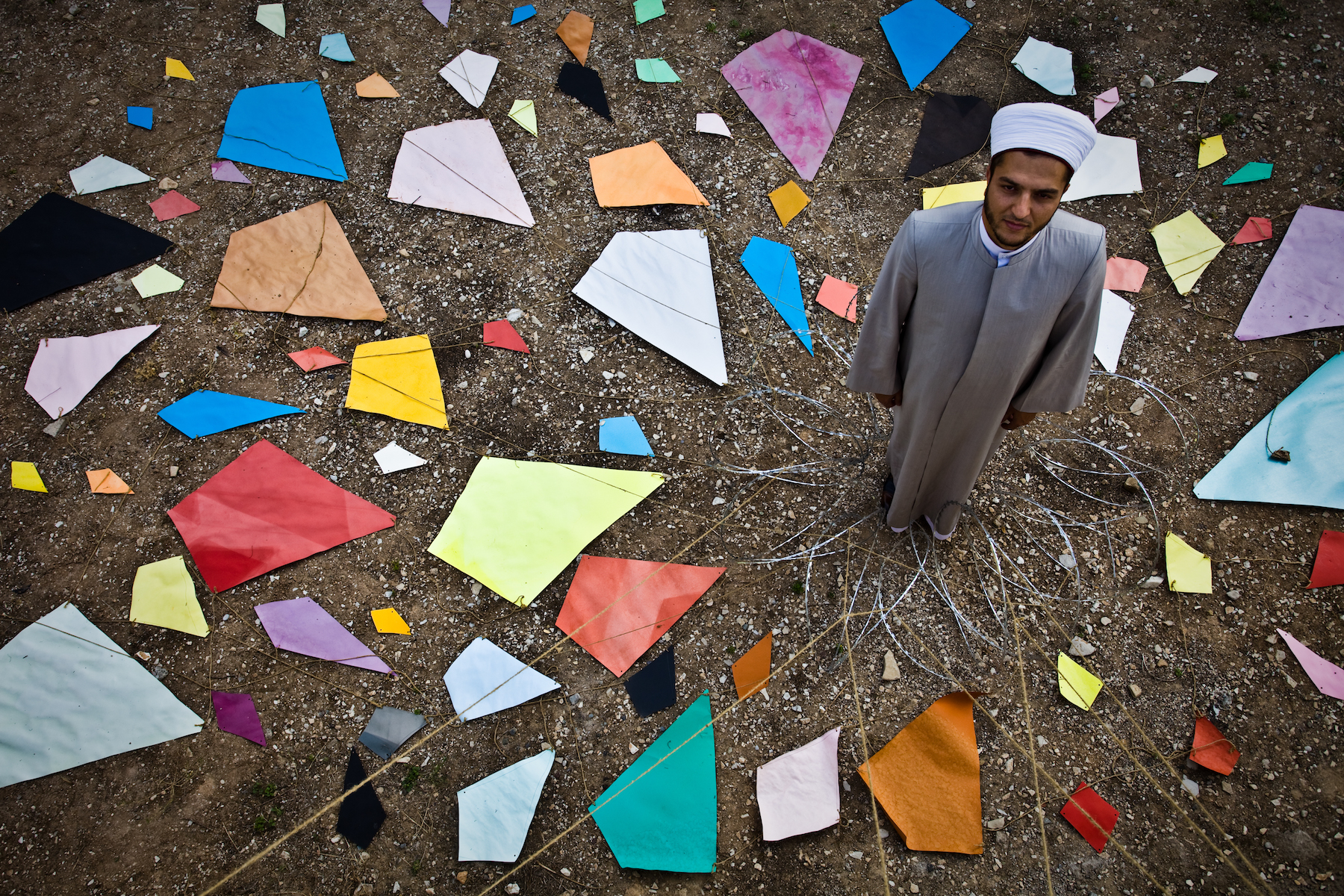 From the series Homeland, Exile (2016). Courtesy of Akam Shex Hadi.

Along with the artist Salam Atta Sabri, Akam Shex Hadi has been invited to show new work at the 5th International Çanakkale Biennial, in Çanakkale, Turkey. Opening on September 24 2016, this six-week exhibition will explore the theme of Homeland. Both artists have been commissioned by the Ruya Foundation to produce new work around this theme, and its relationship to national identity, borders and human movement. The Turkish city of Çanakkale is located on the Dardanelles Strait, just north of the epicentre of the European refugee crisis in the Aegean Sea. The invitation to participate at the exhibition, from the biennial curators, came after Shex Hadi and Atta Sabri showed their work at an international art fair for the first time with the Ruya Foundation at the Pavilion of Iraq at the 56th Venice Biennale in 2015.

“Migration has always deprived us of some of our dreams, but it has also created others”
Akam Shex Hadi

The concept of homeland forms an important part of the practice of both artists. Sulaimaniya-based photographer Akam Shex Hadi has been exploring the wave of Iraq’s internally displaced ethnic minorities ever since IS’s attacks in northern Iraq in 2014. In his recent project, mentioned above, the artist explores the physically confining role of national borders, in contrast to a movement or place that can be imagined or hoped for. “Migration has always deprived us of some of our dreams, but it has also created others,” says the artist. Salam Atta Sabri’s earlier work, ‘Letters from Baghdad’ (2005-2015), which was first shown at the Venice Biennale in 2015, is a visual diary of over 150 drawings that the artist produced privately upon his return to Baghdad with his family in 2005, after having studied in the USA and lived in Jordan for over ten years. It weaved together elements of Iraq’s modern and ancient history, with the artist’s own personal journey and travels.

A trained ceramicist from Baghdad, Atta Sabri will be exhibiting a new series of drawings, ‘Date Palm Killing Fields'(2016). The series draws on the large-scale uprooting and destruction of palm tree orchards in Iraq. The artist highlights the loss of an important part of Iraq’s natural and cultural heritage, which began with the Iran-Iraq war, and was aggravated by ongoing conflict, neglect and construction in Iraq’s cities. “Iraq was once the leading date producer in the world. After petrol boom of the 1950s, oil soon replaced agriculture in the Iraqi economy,” Atta Sabri explains. “Iraq and its inhabitants have a deep and ancient relationship with date palm trees that we must preserve. Images of palm trees appear in Mesopotamian cylinder seals. To this day people cultivate the trees for their dates, and use their wood in traditional craft work. They rely on these trees to lie in the shade, and keep the cities cool in the summer,” he says. 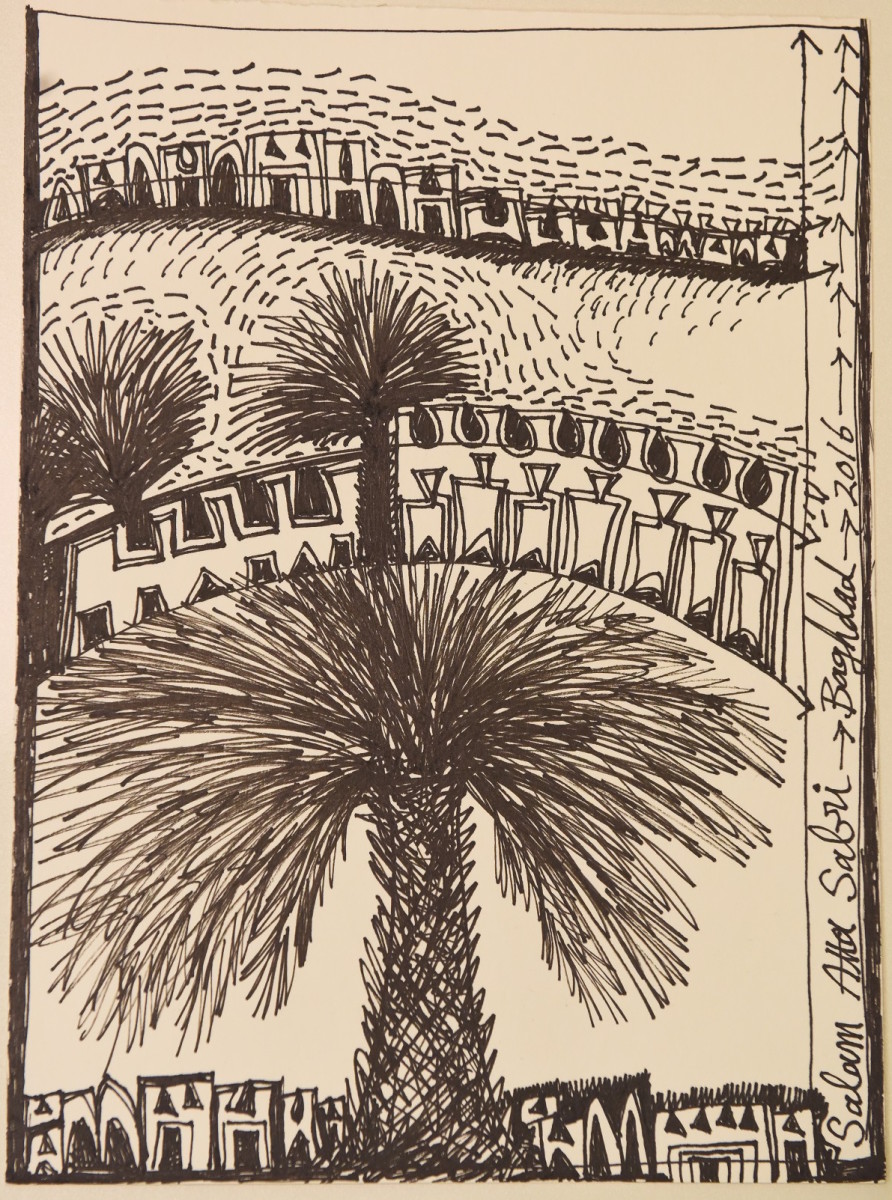 From the series ‘Date Palm Killing Fields’ (2016) by Salam Atta Sabri. Courtesy of the artist.

Artists inside Iraq live in isolation from the global art community, and Ruya’s mission is to facilitate the contribution of Iraqi voices in important cultural conversations, taking place on platforms such as the Çanakkale Biennial. At the Biennial, Shex Hadi and Atta Sabri will exhibit alongside 40 internationally celebrated artists. This includes artists who have dealt with migration, refugees and temporary settlements in their work, such as Bouchra Khalili, whose project ‘The Mapping Journey Project’ (2008-2011), a series of interviews with individuals who crossed the Mediterranean basin, is currently on display at the MoMA, New York City and the French street artist JR, whose photography projects have adorned the favelas of Brazil and the concrete walls on the Israeli-Palestinian border.

Ruya is proud to support and promote the work of these two artists, particularly at the Çanakkale Biennial. Since taking part in the Pavilion of Iraq in 2015, Atta Sabri has been invited to show his work for the Bottom Line exhibition at S.M.A.K. Ghent and Alternativa Festival in Gdansk, among others, and Shex Hadi’s work has been exhibited at the Artspace, Dusseldorf. Both artists were invited to show their work at a re-staging of Invisible Beauty, the Pavilion of Iraq in 2015, at S.M.A.K (Museum for Contemporary Art) in Ghent, Belgium.

The Çanakkale Biennial opens on 24 September and runs until 6 November 2016.