Akam Shex Hadi (b. 1985) is a photographer from Sulaymaniyah in Iraqi Kurdistan. His practice can be understood as staged photography that nevertheless has a strong documentary aspect. Shex Hadi has made a new work for the Pavilion that deals directly with Isis and the fate of Iraqi refugees and internally displaced people. For this project he spent time photographing four different refugee communities from across Iraq, Yazidis, Kobanis, Christians and Kakais. Shex Hadi has participated in several festivals across Asia and the Middle East, including the Chobi Mela International Photography Festival in Bangladesh, 2013. He has also won awards for his work, including the T.A.W. Larsa Prize for Creative Photographers. He writes to Ruya Foundation about his work. 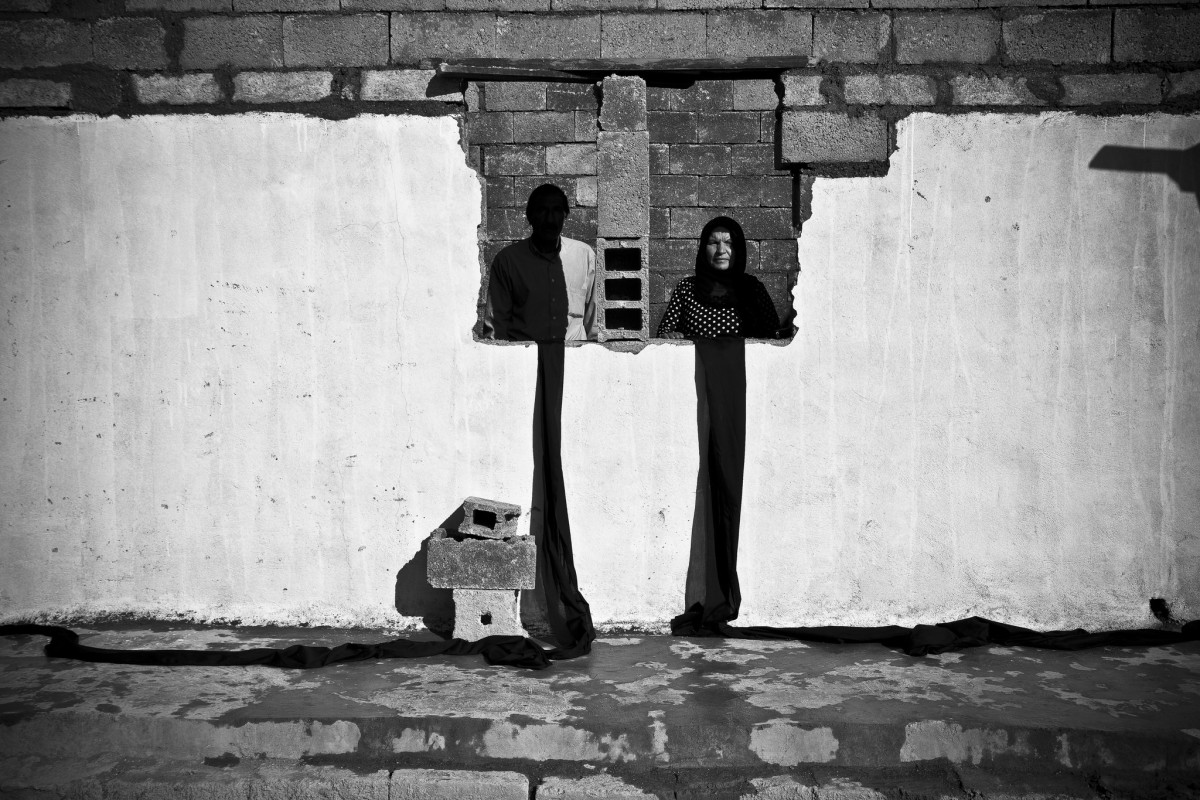 In Kevin Carter’s photo of southern Sudan in 1993, a child crouches next to a vulture awaiting his death. The photograph resulted in the increase of humanitarian aid for Sudan. Eventually, the photographer committed suicide.

Photography is a direct and effective link to the eyes of humanity. A photographer does not judge, but leaves images open for audiences to interpret. He employs a special method to show things in a new light, in a manner not always seen by others.

My former project was a photo installation about the chemical weapon attack on Halabja, in the Iraqi Kurdistan Region, by Saddam Hussein’s government. Over five thousands citizens were killed. To tell the story of 15 survivors of that attack, I took a photo of them where the events took place, holding a balloon in front of their faces.On the balloon was a smiley face – a symbol of revival. I believe that those who survive war or disasters should re-start their lives: they should not get stuck in the disaster, or be isolated from life, or keep a deep hatred in their heart that may lead to retaliation. Ultimately, we all live on the same planet and we should live together peacefully. When there is retaliation, peace loses its meaning.

When people are forced to move from one place to another, they feel uneasy. This feeling is more intense for a photographer. Consider the child who cannot sleep out of cold or heat and has to pay the price for hatred among adults. I was disturbed by this, first as a human being,then as a photographer. Three months after the arrival of the refugees in Erbil, and after visiting them in their camps and learning about their situation, I wanted to start a new project. So, I chose four segments – Kobane, Yezidi, Kakayi, and Christian refugees. Despite their differences in terms of culture, religion and beliefs, they live in the same situation.Ultimately, we are all human beings. I wanted to use this medium to deliver their voices and mine to the world.Luckily, Ruya Foundation shouldered this burden and so I express my gratitude.

My method of work is to introduce ideas into my photos. For example, my work on the rise of ISIS is far from showing weapons or Islamic faces or dead bodies. Rather, I have likened all these elements to a black line contrasting the culture, religion and beliefs of my characters, these lines have entered into the photos and surrounded the individuals. I have chosen a simple frame for the photos so as to interact immediately with the audience. I took the images in refugee camps – the very place where the refugees now live: Erbil, Lalish, Barika camp, Hawar, and Slemani. For each part, I have taken seven photos as the seven days in a week to show the repetition of the real life situation of the refugees.

I hope that this project results in the increase of humanitarian support, that the world will find a fundamental solution and that no more wars will take place so as to prevent having more victims and more displaced people. When this happens I will no longer work on projects like this one. Like many other artists in the world, I will talk about the beauty of life.

Supporting artists is crucial. We have speeches to make that no politician can deliver. We are the ones who want to deliver the message of peace and love, to show the unseen, and to introduce different cultures and find commonalities between them.

To me, it is very important to see the culture and art of Venice with a real eye, and to find new windows for new projects for myself, but also for my friends who have similar projects that the world needs to see.