Haider Jabbar (b. 1986) started his career in film, working in art direction on short and feature films. He received a classical art education at the Baghdad Institute of Fine Arts but succeeded in escaping canonical restrictions and now works in a very intimate and direct style of painting. He has had two solo shows in Baghdad, the second entitled RCU (Respiratory Care Unit) in 2013 in homage to his late mother. Now a refugee in Turkey, Jabbar is continuing his career as an artist by way of a grant from the Ruya Foundation. His Pavilion works will focus on those who have been killed by ISIS in Iraq and can be understood as a personal registration of human catastrophes. He writes to Ruya about his work, and his time in Samsun.

Curiosity, and the love of discovery makes us seek mysterious things. That is why I became an artist.

Poverty and hunger were part of every household in Iraq after the sanctions in the 90s, when I was a teenager. My family was affected.  My father quit his job at the al-Hurriya Press House (which published all the major government books, magazines and newspapers), for political reasons. We were forced to find new work to earn a living. We made paper bags from magazines and newspapers that my father brought back from work, and distributed these to shops and restaurants. My mother made bags from flour sacks and leftover fabric. She found these on the pavement outside the tailors of the local market in Al Amin 2 in the New Baghdad neighbourhood, where we lived. She enjoyed arranging the pieces according to their colour and sewing them together with geometrical patterns. Her needlework was skillful. When I was 10 years old, she asked me to draw a butterfly for her, so that she can embroider it on the bag. I did not know how to draw a butterfly but I tried, and succeeded. I’ve been diligent and attentive to detail since that day. Was it the butterfly or my mother’s request that made me this way? I do not know. 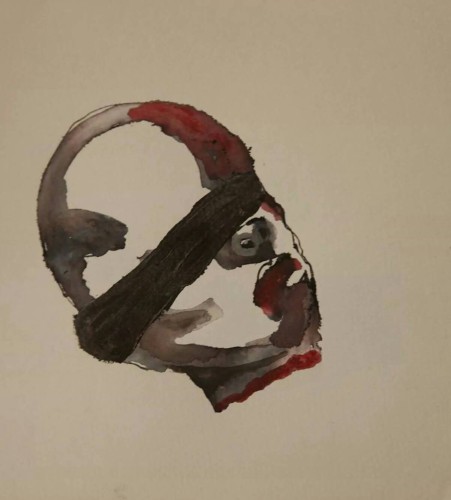 Haider Jabbar’s recent work for the Venice Biennale focuses on the beheadings by ISIS. Image courtesy of the artist. 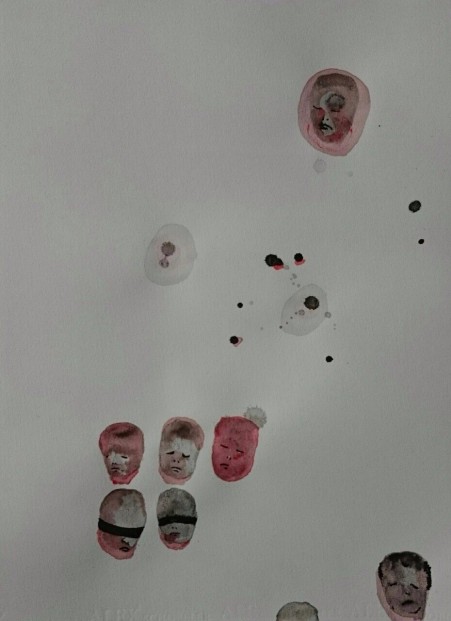 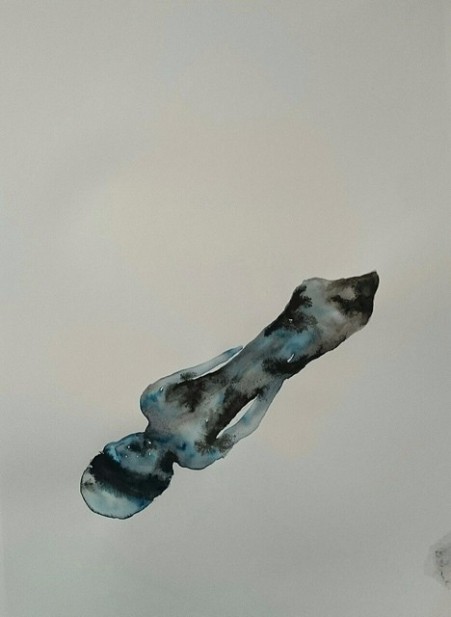 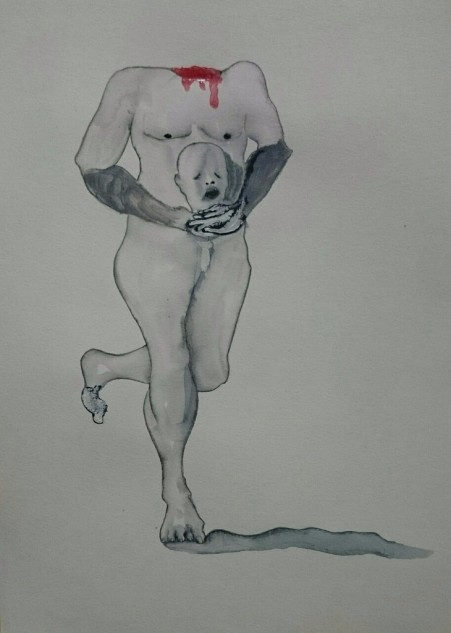 My mother died last year of a respiratory illness. I spent months with her in hospital. Overwhelmed by the masks and breathing aids she needed to keep her alive, I painted heads with gas masks.
The artist plays an active role in society. He can change a whole generation’s fixed ideas. For example, the caveman conquered all his fears by drawing the monsters haunting his mind. He defeated them psychologically and then practically, by drawing.

I draw these fearful scenes and wait for hope.

In Baghdad, fear and anxiety pursued me everywhere. They still haunt me today, though I am Samsun. I draw these fearful scenes and wait for hope.
Amid the difficulties I faced in Baghdad, I often asked myself if living a life was better than  staying alive. In Baghdad, it was difficult to reveal things that I carried inside of me, whether they were artistic, personal, social or political, I always feared rejection. Now, I live in Samsun in Turkey and I am filled with love. I am supported by the Ruya Foundation. I can voice loudly what I love, reject or do not like. This is wonderful. 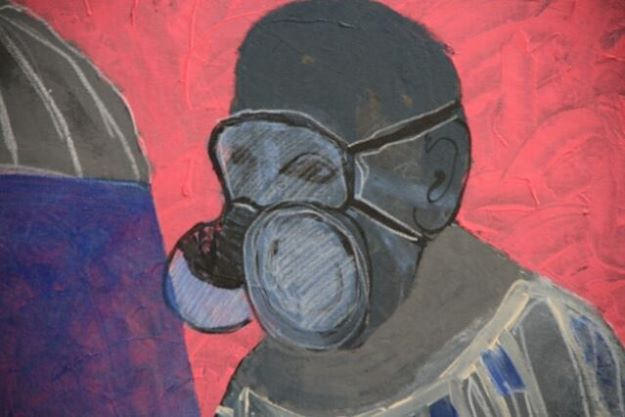 Haider Jabbar, from the series Respiratory Care Unit, 2013. Courtesy of the artist.

My new project is a group of drawings in memory of people who were deliberately or unintentionally killed in a terrible way. I want to interpret the sadness and fear that was inside each of them when they were killed by their pathetic murderers. The project is a work in progress.
I don’t believe in memories. I believe in the human being who seeks progress. The past has shaped me: it gave me the spirit of persistence and the will to contemplate a more beautiful future.

I don’t believe in memories. I believe in the human being who seeks progress. 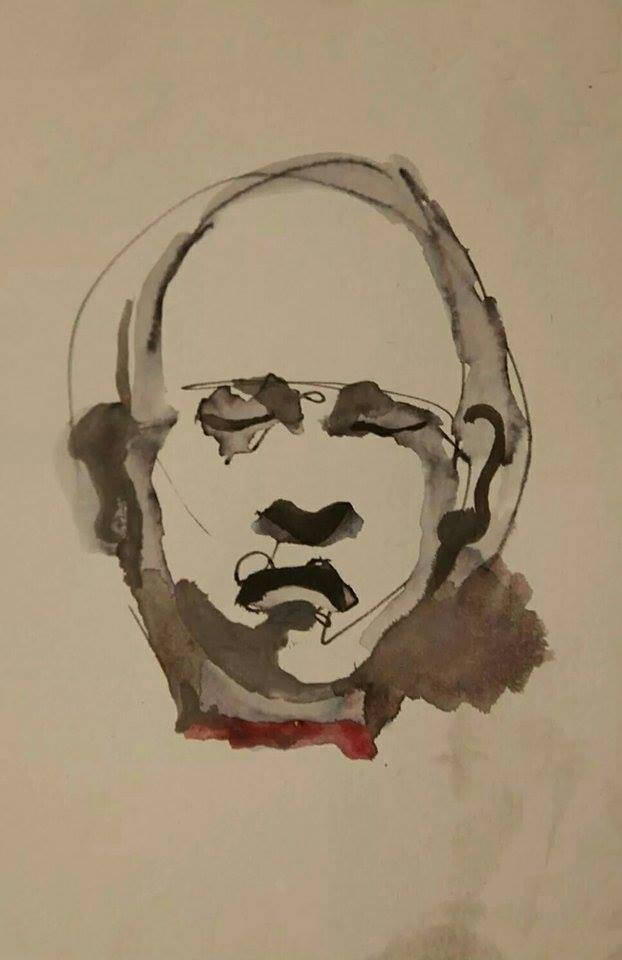 Showing my works in Venice marks an intellectual and personal change in my life. As an asylum seeker, I could not get a visa to see the exhibition in Italy, but the most important thing is that my work is there and can translate my personal situation. I might fail to express in words what I want to say but these works will sum up the inner conflict of my imagination, the fear, the struggle and the screams.
I hope that this festival will continue to share the voices of Iraqis who are still suffering from intellectual confusion, sectarian struggle and the general disrespect for the productive and loving human.
The Iraqi artist and intellectual has produced and sought beauty since Antiquity. Despite the constant calamities of the last decades, Iraqis are still contributing to the scientific and intellectual knowledge of mankind.