The Iraq Pavilion artist Serwan Baran fought as a soldier during the Iran-Iraq war, and served as a war artist in the first Gulf War. But he dismisses his art work from that period as state-sanctioned propaganda. “We painted in a realistic style but the paintings had nothing to do with the reality that we experienced on the ground as soldiers,” he told Ruya in an interview.

Yet a series of paintings produced during and shortly after the First Gulf War between 1990 and 1993, reveal Baran’s attempts to portray a more personal, nuanced view of the fighting. The artist negotiated the reality of his own lived experiences with the constraints of war propaganda and censorship set by the Iraqi regime. These paintings also reveal notions of heroism, martyrdom and patriarchy which Baran explores more expressively in his later work, after his departure from Iraq.

Three images from this series have been published below by Ruya for the first time. 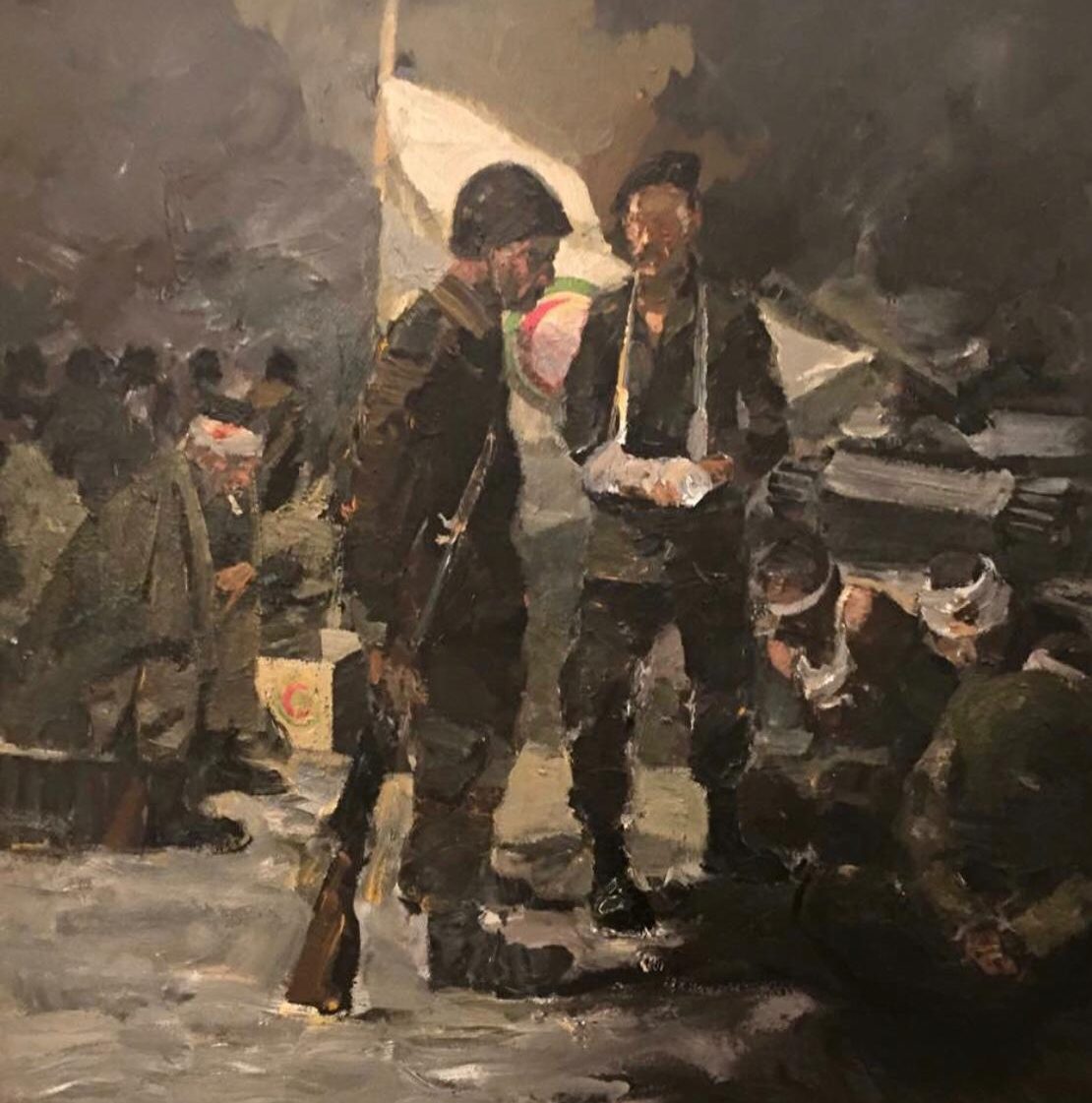 In this painting, a night guard looks down at captured soldiers. He holds his gun up vertically along his body, which emphasises his dominance over the prisoners who crouch below him. At the back of the painting, silhouettes standing in a row echo an execution. To the right, a parked tank reveals the proximity to the frontline. Despite the signs of violence, the red crescent on the flag and box indicates that they are receiving medical care – perhaps with some degree of irony. In this scene, the Iraqi army are the victors who also care for their wounded prisoners.

But the presence of two injured Iraqi soldiers gives nuance to the notions of victory and defeat. One of them walks towards the night guard, holding his broken arm in a white sling. His posture is visibly more relaxed, as if he were off duty. To his left, a seated soldier with a bandaged bleeding head, has covered himself in his coat and lights a cigarette. Baran draws clear parallels between the seated soldier and the crouching prisoners. One of the prisoners also has a bandaged head injury. Such a levelling device suggests there is no distinction between one army of soldiers and its enemies. They are all ultimately injured and in captivity. 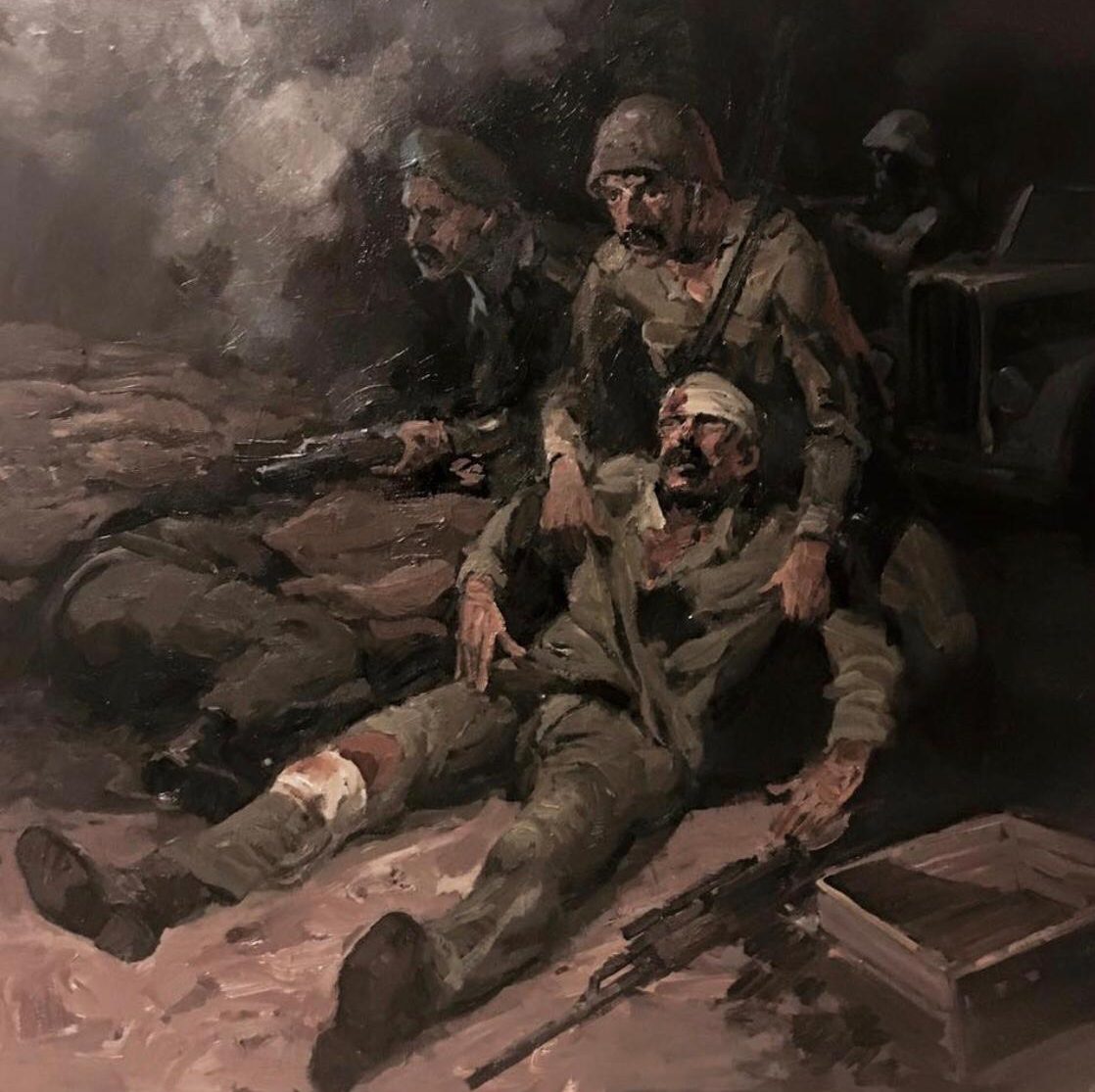 In this scene, a group of soldiers are mobilised in battle. At the centre of the painting, two men look ahead in the direction of their enemy. In front of them, a man has died and the other is wounded. Though they know the direction of the threat, they cannot quite see it, as is suggested by the way the second soldier lifts his gun without aiming. The painting’s composition suggests the large scale of the battle, another soldier mirrors their position in the darkness at the back of the painting.

Baran’s use of light puts the emphasis on the painting’s main character: the soldier who leans forward to drag the injured soldier to safety. This soldier is also aware of the threat to his own life: as he looks ahead at the enemy, his alert, wide open eyes glimmer in the darkness. Thus Baran captures a moment of bravery, but also of moral decision-making which conveys the soldier’s internal conflict.

While the paintings appear to be observational works, they are also influenced by representations of war in popular culture. Baran’s use of lighting and staging is cinematic. Often the scenes recall those of popular war epics such as Kelly’s Heroes (1970), The Big Red One (1980) and the Soviet film Leningrad (1993). In addition, the war photography that was produced during the Vietnam war created new understandings for the portrayal of combat. 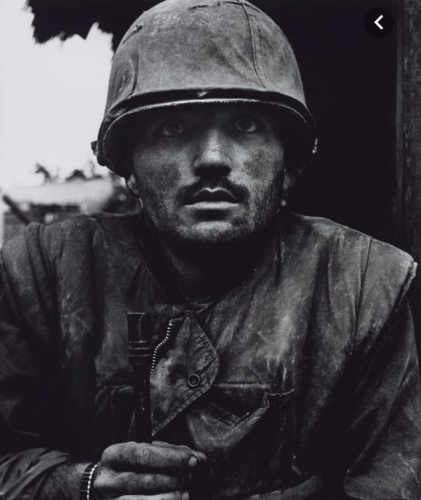 The Iran-Iraq war also drew on the possibilities of weaponising imagery and photography. The Iranian Revolutionary Guard, which took power in 1979, was actively engaged in the production and dissemination of war photography and posters under the banner of “The Holy Defence”. These images primarily served to portray the Iraqi assault on Iranian territory, and also tried to establish a new visual culture for Iran’s recent Islamic revolution. Meanwhile, Saddam Hussein produced his own war epics such as Al Qadisiya (1981) about the early medieval battle of the same name between Arab and Persian armies. 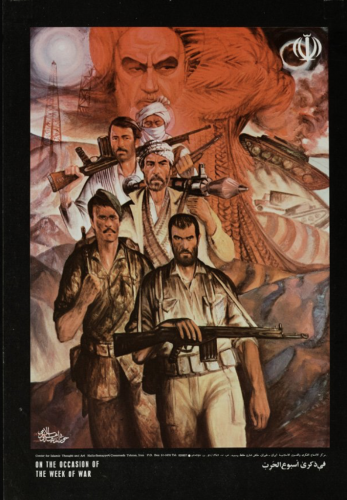 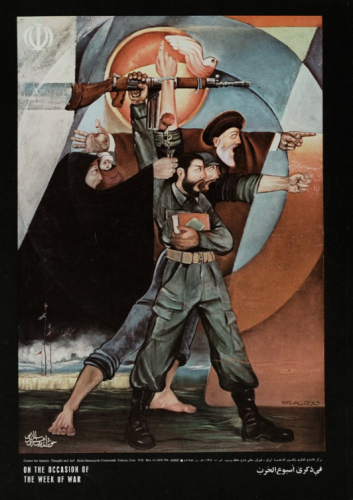 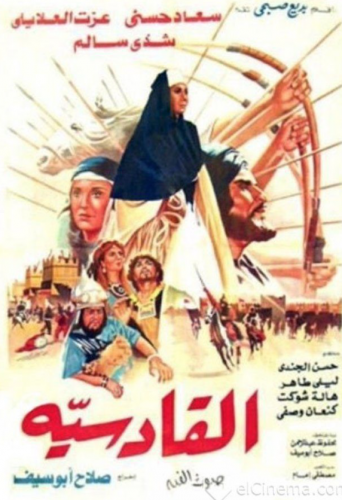 Baran’s combat paintings were produced under the strict conditions of state censorship and propaganda. Yet they also reveal the artist’s own philosophical and psychological impressions of war. The soldiers may appear brave, but they are also victims of the ongoing battle, suffering from captivity, physical injury and internal moral conflicts. While the realistic style of the painting insists on the objectivity of the scene, the artist’s use of staging and light suggests he was also inspired by cinematic imagery and the popular culture of his time. Though the paintings were part of a wider war of images, they also express the personal experiences of a young soldier. 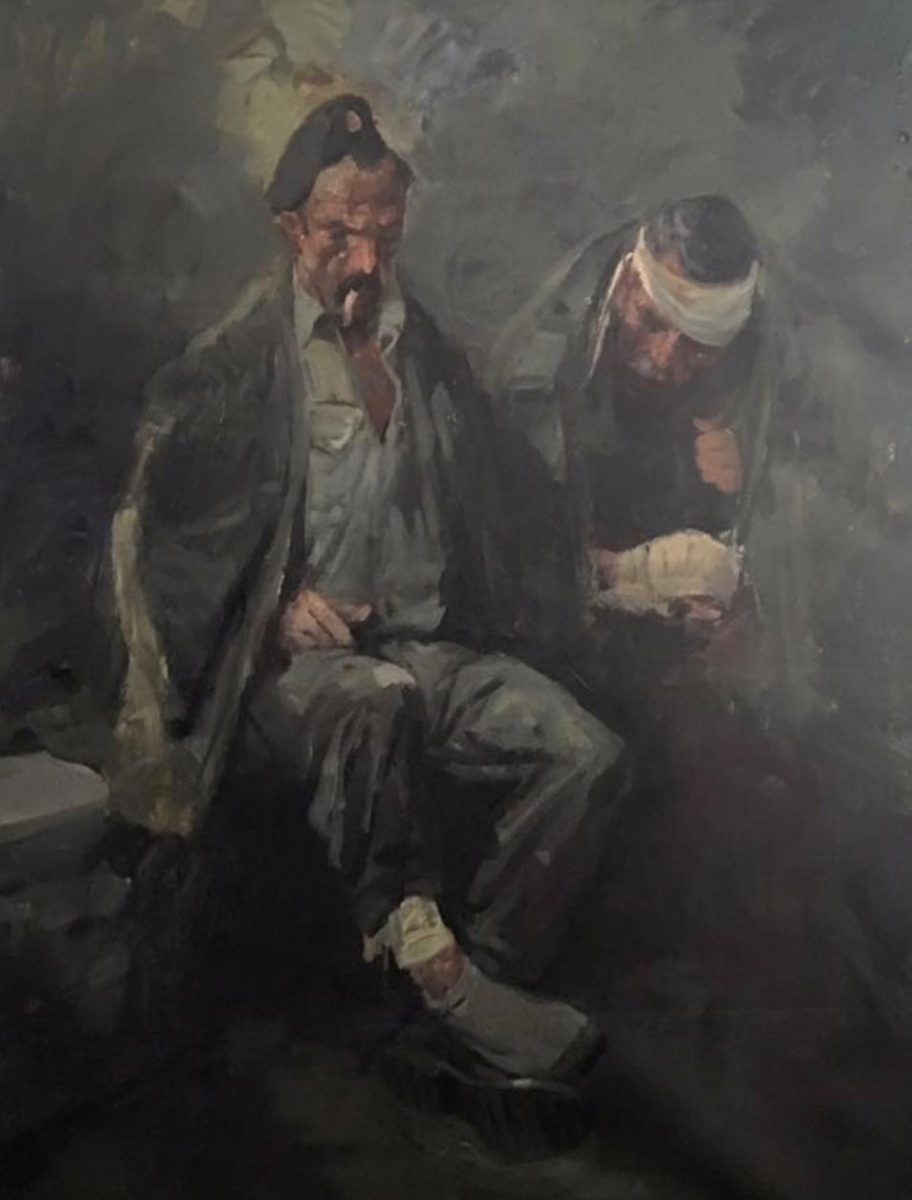