Hassan Massoudy draws on his training as a calligrapher to create energetic compositions based on the written word. In an artistic career that has spanned 45 years, Massoudy’s experimental approach has pushed the limits of a rigid calligraphic tradition. His work includes the writings of poets and philosophers from all ages and cultures, ranging from St. Augustine, Virgil, Ibn’ al-Arabi, Lao-Tzu and Baudelaire. He has collaborated with performance artists and musicians, presenting calligraphy as a live, performative act.

Born in Najaf in 1944, Massoudy worked as a calligrapher in Baghdad the 1960s, before enrolling at the École des Beaux- Arts in Paris in 1969. Recently he had his first first solo-show in New York ‘Words, Breath, Gesture’ (2017) at Sundaram Tagore, and that was later shown at the October Gallery in London. His latest book Calligraphies of Love (2017), is published by Saqi. 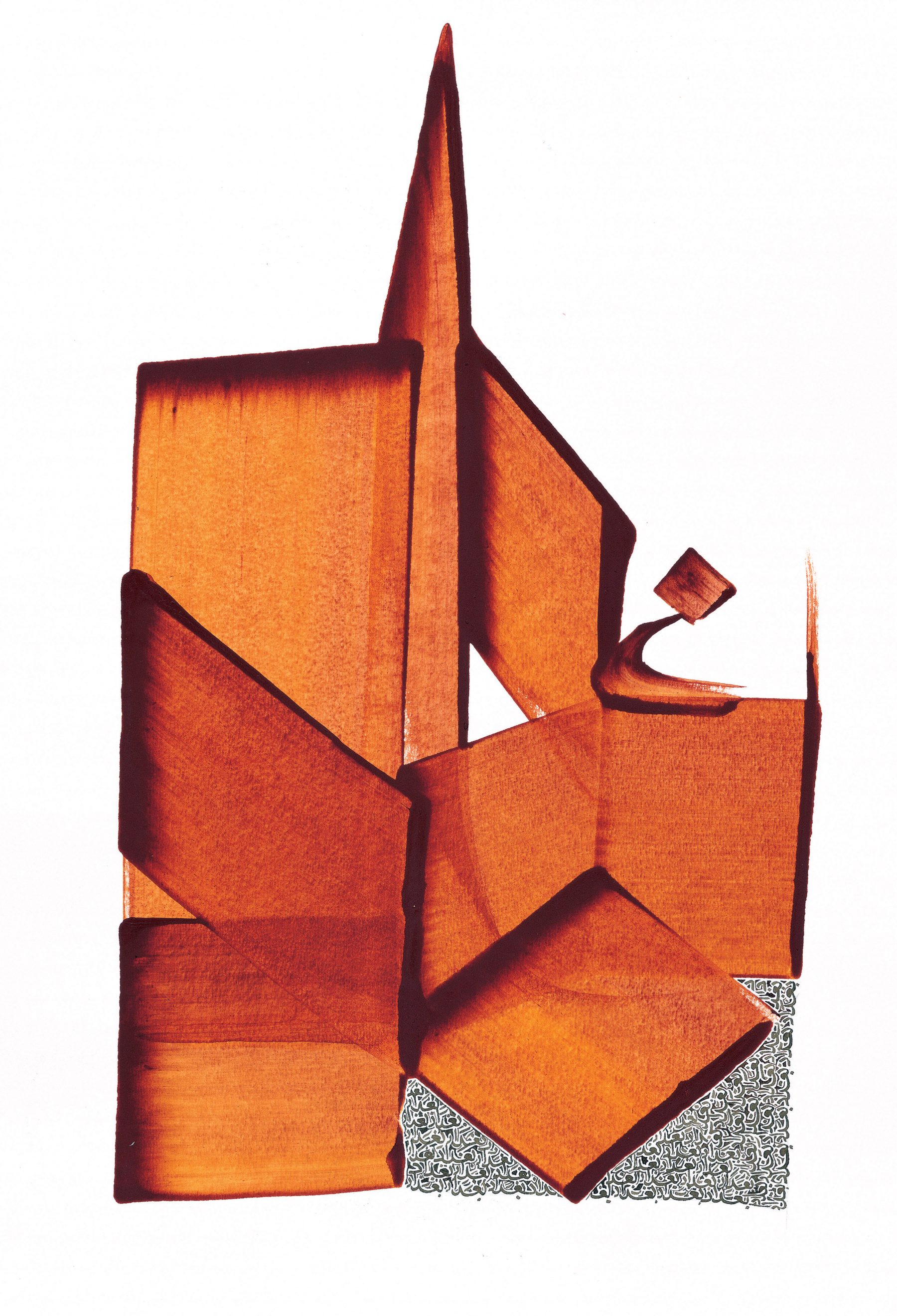 How would you define an image, a word and a sound?
An image has many functions, from the cave art of primitive man, to religious images such as those found in Ancient Egypt or in churches. Political regimes generate their own imagery, contemporary fine artists express human emotions through images, while today, it is digital images that form part of our daily experience. The value of an image depends on the image-maker’s intention and the concepts they bring to bear on its production.

Images can be easily assimilated by the viewer while words require a more active engagement. A word addresses the mind directly, leaving it to the listener or the reader to translate its meaning.

Sound speaks to memory. When we hear an evocative sound, similar sounds leap out from our memories: whether they are welcome or unwelcome.

I am particularly fond of images of dunes in the desert.

How did letterforms become so important for you in the creative process?
I have always loved beautiful handwriting. After high school, I applied to the Institute of Fine Arts in Baghdad, , but due to registration complications, I was unable to attend. For the next 8 years, I worked as a a traditional calligrapher in advertisements and signage,in Baghdad. Finally, I was granted a place at the École des Beaux-Arts in Paris in 1969. I studied technique, practice and theory, and made a living as a calligrapher for an Algerian magazine. I educated myself about Islamic Art and world art in the libraries and museums and became exposed to Paris’s contemporary art scene. In 1972, I met the actor Guy Jacquet. He was studying Arabic and invited me to take part in a cultural event on sound and letters in Chalon-sur-Saône. I listened to him read out lines of poetry and wrote them directly onto an overhead projector. The Iraqi musician Fawzi Al Aedi eventually joined our performances, which we called ’Arabesque’, and we toured Europe for thirteen years. In the studio, I continued to produce figurative work. My calligraphy started to appear in these pieces. It was enthusiastically received and I devoted myself entirely to developing a modern Arabic hand. 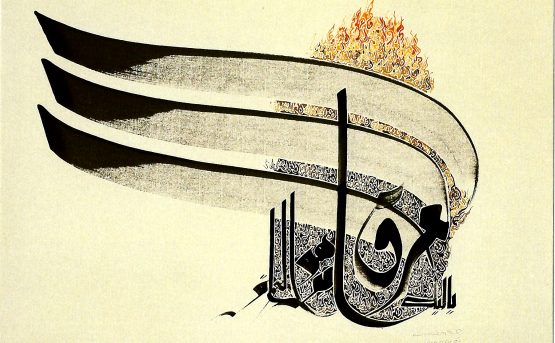 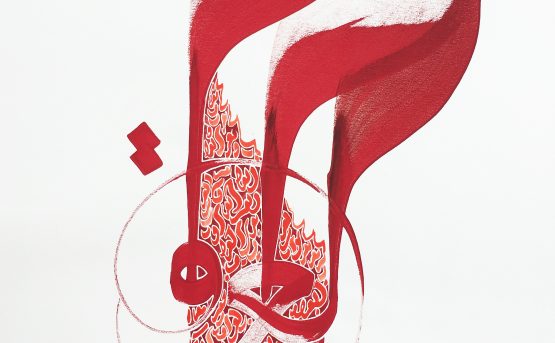 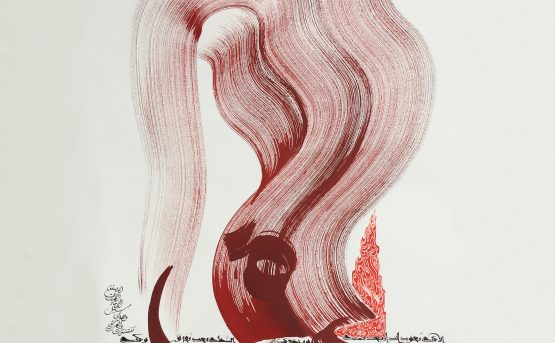 Hassan Massoudy, “Will the home be restored after crumbling apart and reassemble after division, will we breathe Iraq’s breeze, and will we find our way again to the Euphrates’ clapping waves?”, 2003. Courtesy of the artist. 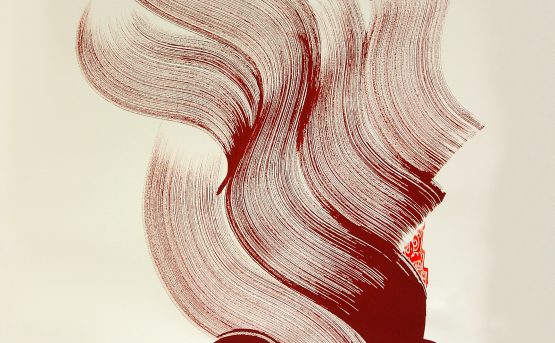 How did the ‘Arabesque’ collaboration help you push your understanding of letter-based arts?
Traditionally, Arabic calligraphy is written extremely slowly, but I had to be quick to keep up with Jacquet’s recitation. We were forced to find solutions to calligraphic difficulties. I believe that these were our own social problems, which were still waiting to make the leap into the modern world. Today, letter-based art movements are flourishing. Yet when we first performed ‘Arabesque’, there was no modern calligraphy and the tradition had become very rigid. I would tell myself that these performances were promoting our societies. This enabled me to move forward with my research and to push the limits of the tradition.

Can abstract representation have meaning?
My artistic practice has always revolved around the abbreviated presentation of poetry and proverbial wisdom. I focus on the most important word in the phrase. I deconstruct and rebuild it with more spontaneity, making some letters larger and reducing others in size: adaptions which express something related to the meaning of the phrase as a whole. Colour is also helpful in creating meaning. The word for fire, for instance, might contain red; water will be blue. Since geometric forms and colours are universal, these forms enable audiences who have no knowledge of Arabic to enter into the space I create with the letters, and also the space that surrounds these letters (i.e. the void). I always picture my work as towering statues standing in the desert.

What was the first image that you admired as a child?
When I was five years old, my mother took me to the fabric market in Najaf. Fabric of every kind and colour was stacked on shelves in tiny shops which had their doors open to the street. Najaf’s predominant hue is that of dust—the ground, the walls of buildings, the grit blown in from the desert—but the fabric market was like a bright garden: unique and stunning, like no other market.

The fabric wrapped around long wooden beams was in the majority of cases imported from Asia. My mother selected a roll, and by coincidence the quantity she wanted exactly matched what was left. When they unwrapped the fabric a piece of paper fluttered from the empty wooden beam: a portrait of a beautiful Asian child, his round glowing face about life size. The salesman handed it to me. I was swept by a tremendous joy.

Was this because I now owned a picture, or was it the child’s happy face that entranced me? I went home, clutching the paper like a priceless treasure. The first picture I had ever owned! In the 1950s images were frowned upon, in a holy city like Najaf. There was no access to modern manufactured goods and printers, and there were no magazines or cinemas. Children my age had no access to pictures and I had never seen one before.

I handled it like an antique. I slept with it and took it with me everywhere. It was all I talked about with other children. It was my toy. In Najaf our only toys were those we made from empty boxes and tins. Sometimes, we’d play with the big ants that crossed our courtyard, balancing breadcrumbs on their back.

Three days later, I was standing in our alley, portrait in hand, when a tall, thin man with a drawn face stooped down in front of me and asked me to give him the picture. I did so. He looked at it for a moment then dropped it into a muddy puddle at our feet, stamped on it, and went on his way.

I was in tears, horrified, I picked the picture out of the dirty water and ran into the house. My mother, sympathetic, tried cleaning the picture with clear water, but the shiny paper had lost its splendour. It now had jagged creases, crisscrossing white lines, that transformed the angelic face into something like a text. An illegible white script. I was shocked. Was the stranger a madman, or one of those people who hated pictures? The picture engraved itself deeply on my heart. The idea of writing, of letters obscuring images, has dogged my thoughts to this day. All my calligraphic work is simply an ongoing quest for the lost picture. With every stroke I am trying to realise an imaginary image, the impression of an unnatural image—half an image, or rather halfway along the path to the image. Behind the lines and letters in my art there is always a ghost form which persuades me that any moment now I will see a picture… 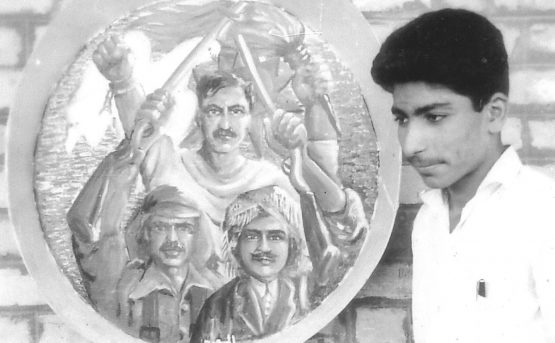 Hassan Massoudy as a high school student in 1959. This early work expresses hope for intellectual and artistic freedom and the desire to see Iraqi and Kurdish forces at peace. It was a childhood dream. Image courtesy of the artist. 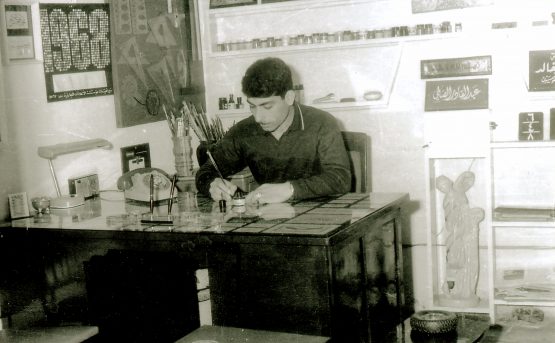 Hassan Massoudy working as a calligrapher in an office in Baghdad, 1968. Courtesy of the artist. 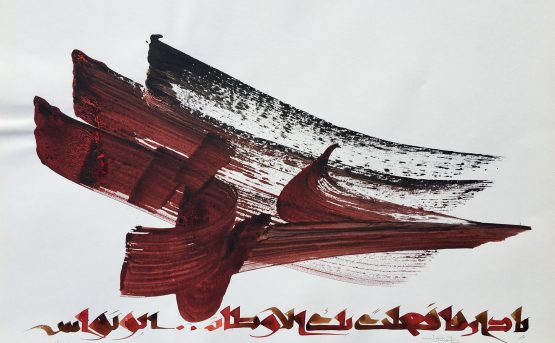 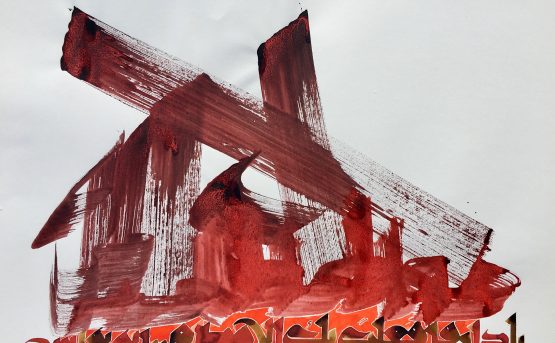 Your calligraphy brings together philosophical texts from all ages and cultures. Would you say your work has a unifying message?
People often tell me that although the phrases I use come from different periods of time, from East and West, they express similar ideas—as though authored by the same person. I want these ideas to have greater currency in an age in which some people have retreated into tribal and religious sensitivities, denying the existence of the other.

How do see the differences between the traditions of Arabic calligraphy and your work as a contemporary artist?
An artisan produces letters without any regard for meaning or the desire to express ideas, and without relating it to the history of the craft. An artist gives the letters spirit, a deep energy which we can sense—we can almost see—in their strokes and harmonies, making lines the like of which have never been seen before.

You have worked with actors, poets and musicians. How have these collaborations deepened your understanding of the art of calligraphy?
Some say that the arts are siblings and that they illuminate each other. In music, the silence between two passages makes me think of a blank space between brushstrokes. A dancer’s attempt to fly through the air, the performer’s daring and risk, shows me how the movement of a calligraphic stroke over the page can transcend the possible and the familiar. Poets taught me to hide words and give space to others. Poets don’t baldly lay out what things mean; they leave that to the imagination of the listener or reader. 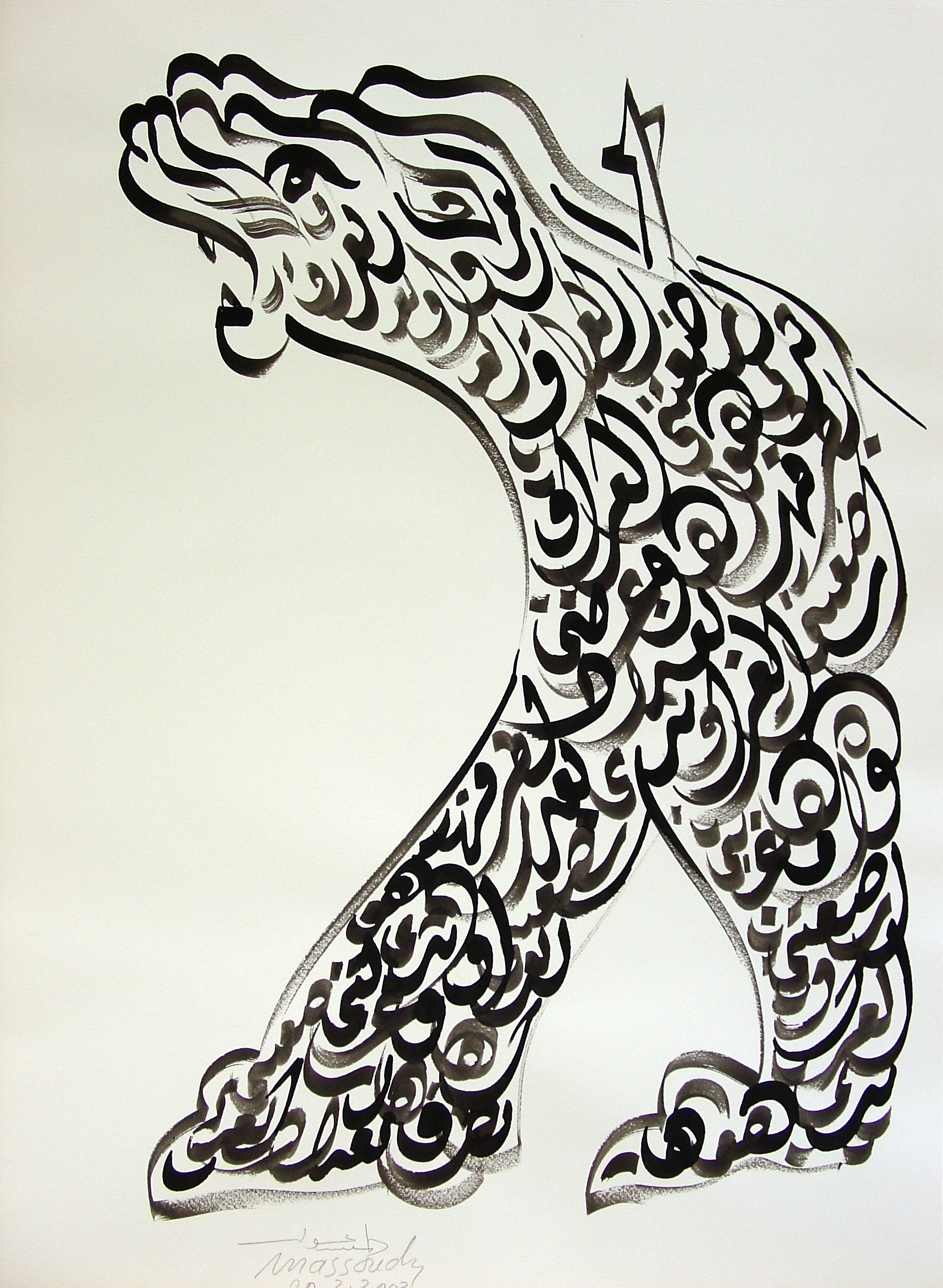 Hassan Massoudy, a work depicting the wounded lioness and lines of Andalusian poetry, 2003. Courtesy of the artist.

You have lived most of your life in Paris. What role does Iraq continue to play in your work?
Despite my forty-nine years in Paris, I remained in spiritual communion with Iraq. In dark times through Iraq’s troubled history, to express my torment, I painted with verses by Iraqi poets. I often revisited these verses in new works many years later. For example, the verse “O Night, where is Iraq?” by Badr Shaker Al Sayyab has become a vessel into which I pour my feelings. The verse: “Iraq suckled me on the breast of her love; Baghdad conquered me with a glance,” written by Abul Hassan bin Mutrif in Andalus, helped me transfer my pain into a noble image that was free of misery. Being away from the place where their affections lie is a universal experience. I often turned to the verse “O home, what have the days done to you?” by Abu Nuwas. The British Museum holds the neo-Assyrian wall relief of a dying lioness. To me, she represents Iraq and her wounds. I made numerous pieces reflecting on her agony, accompanied by Andalusian poetry. As for the future, the promise of better things, I have found it in a verse by Al Juwahiri: “Baghdad, heart of Iraq, its memory and conscience, may no wind ever trouble you.” 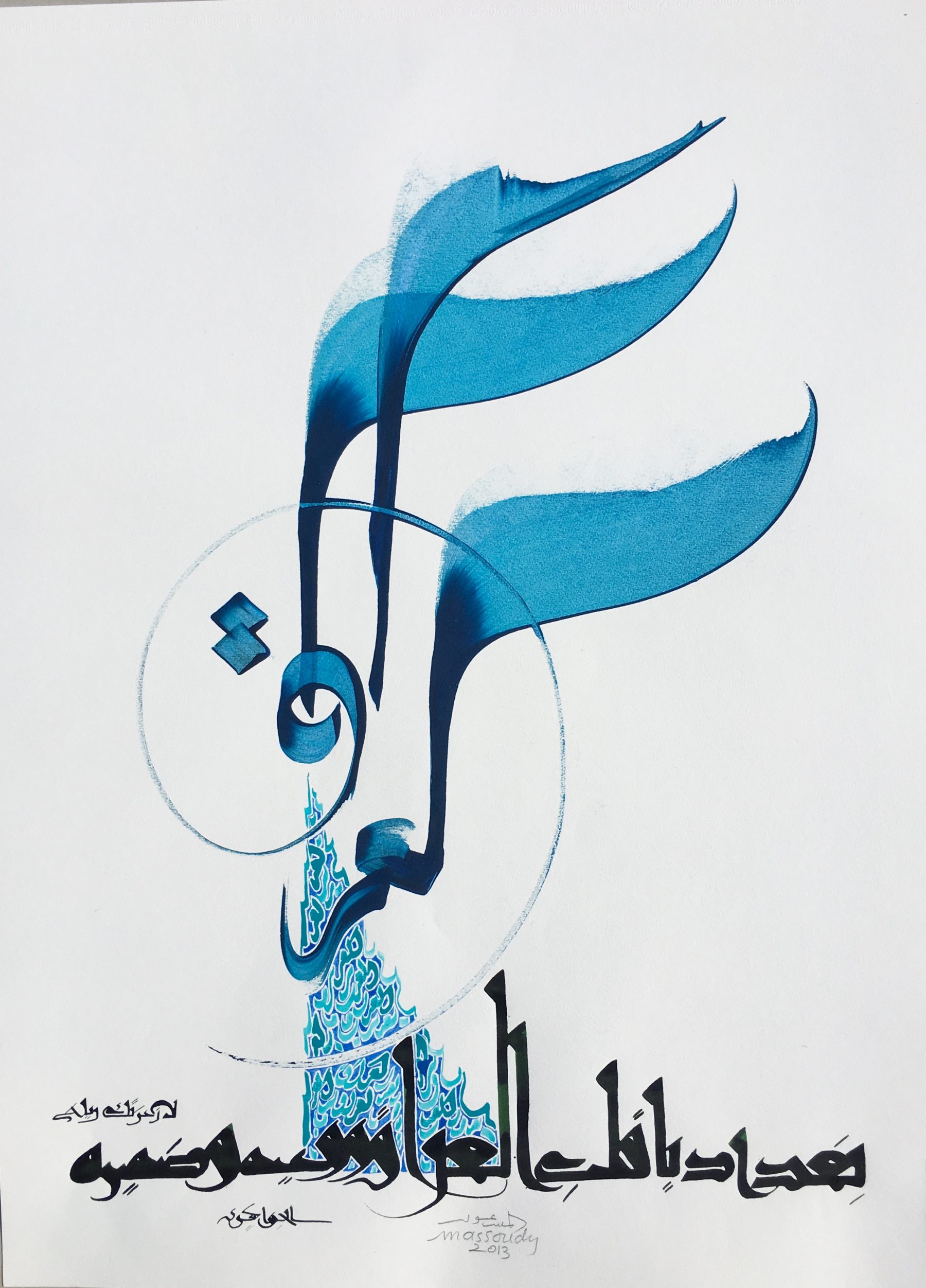 The above text is an edited extract from a longer interview in Arabic with Hassan Massoudy and was translated by Robin Moger. For more information on the artist, see: www.massoudy.net

5. Hassan Massoudy as a high school student in 1959. This early work expresses hope for intellectual and artistic freedom and the desire to see Iraqi and Kurdish forces at peace. It was a childhood dream. Image courtesy of the artist.

6. Hassan Massoudy working as a calligrapher in an office in Baghdad, 1968. Courtesy of the artist.