‘My work involves reduction. I want to make final marks, objects and concept as simple as possible,’ says Mohammed Alani, an Iraqi-born, Brussels-based artist. In the corner of an exhibition room at the Galerie d’Apostrof, Meigem, the tip of a black leather shoe sits on top of a blue chalk stick, which tilts lightly towards the wall. The chalk stick lifts the shoe off the ground, yet the weight of the shoe also grounds the chalk and prevents it from collapsing. The three points of contact between the chalk, the shoe and the ground create an almost perfect right triangle. This careful balancing act highlights the mutual dependency of two seemingly incongruous objects: a blue chalk and a black shoe. 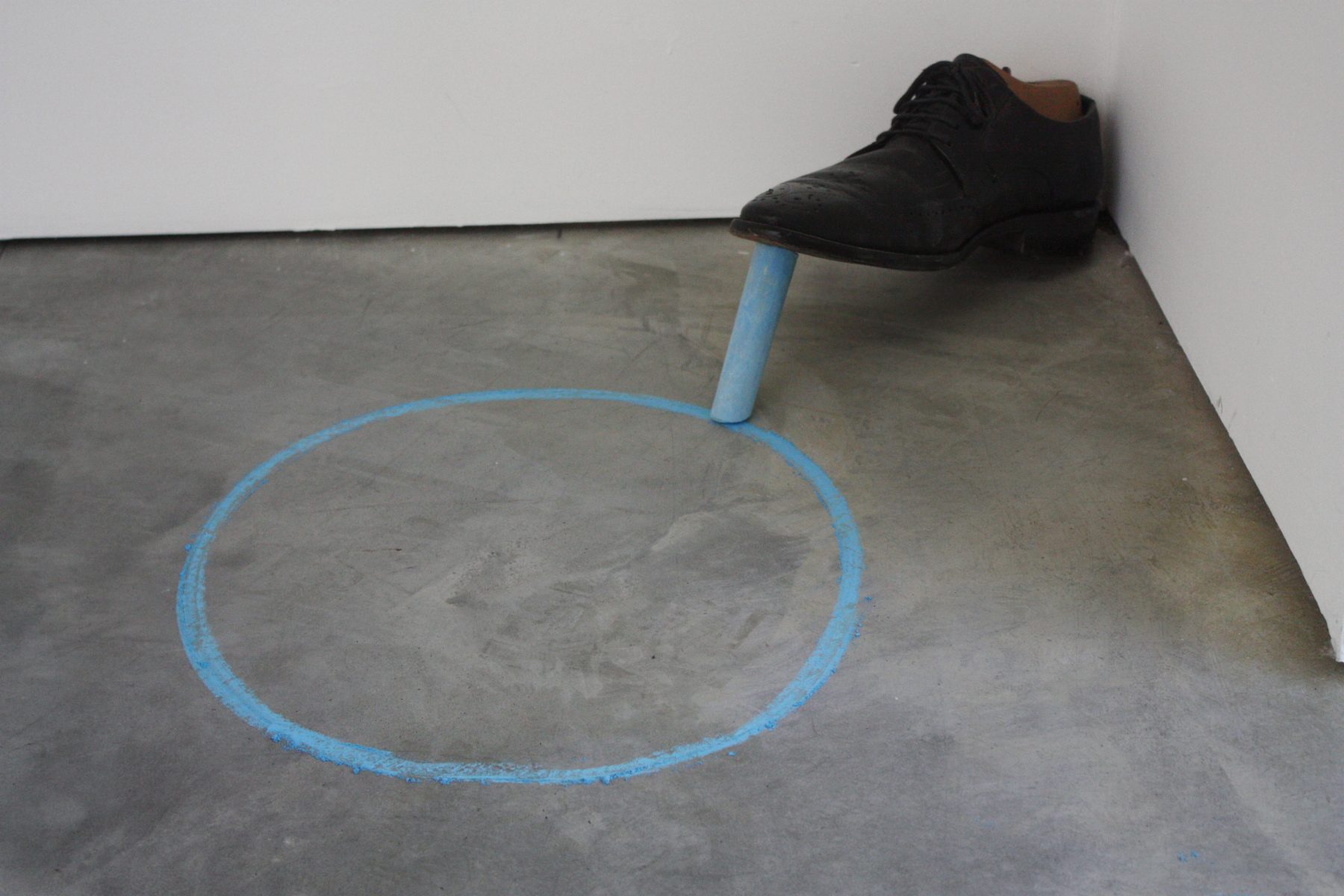 The installation is part of Alani’s presentation at the group exhibition, ‘Take This Waltz’ at d’Apostrof. Elsewhere, a visitor holds up the wooden rail of a clothes horse, from which dangle a hanger and a yellow plastic pouring container. This playful and humorous arrangement, which transforms the viewer into an active participant of the work, asks more arduous questions about objects, their form and their function – in other words, the nature of the things. ‘I am thinking about space, objects, materials and how they work together,’ says Alani.

Alani studied at the Institute of Fine Arts in Baghdad, and moved to Brussels in 1997. He later enrolled at the Academy of Fine Arts of Jean Jacques Gailliard Saint-Gilles, Brussels, graduating in 2015. ‘As a student in Brussels, I tried to find an original voice and materials that I could appropriate and call my own. I used chalk and chalk powder to draw and make things.’ His recent solo exhibitions include ‘Trapped’ (2017) at the Hopstreet Gallery Window, Brussels and ‘Connexions’ (2017) at the Academie voor Beeldende Kunst Oudenaande. He has presented work in group shows including ‘100 Artistes en Liberté’ (2016) at the Jewish Museum, Brussels and ‘Alerts’ (2017) at the Cultural Complex of Siliana, Tunisia. He speaks to Ruya from his studio which he shares with two other artists. ‘The mess you see over there is mine,’ he quips. 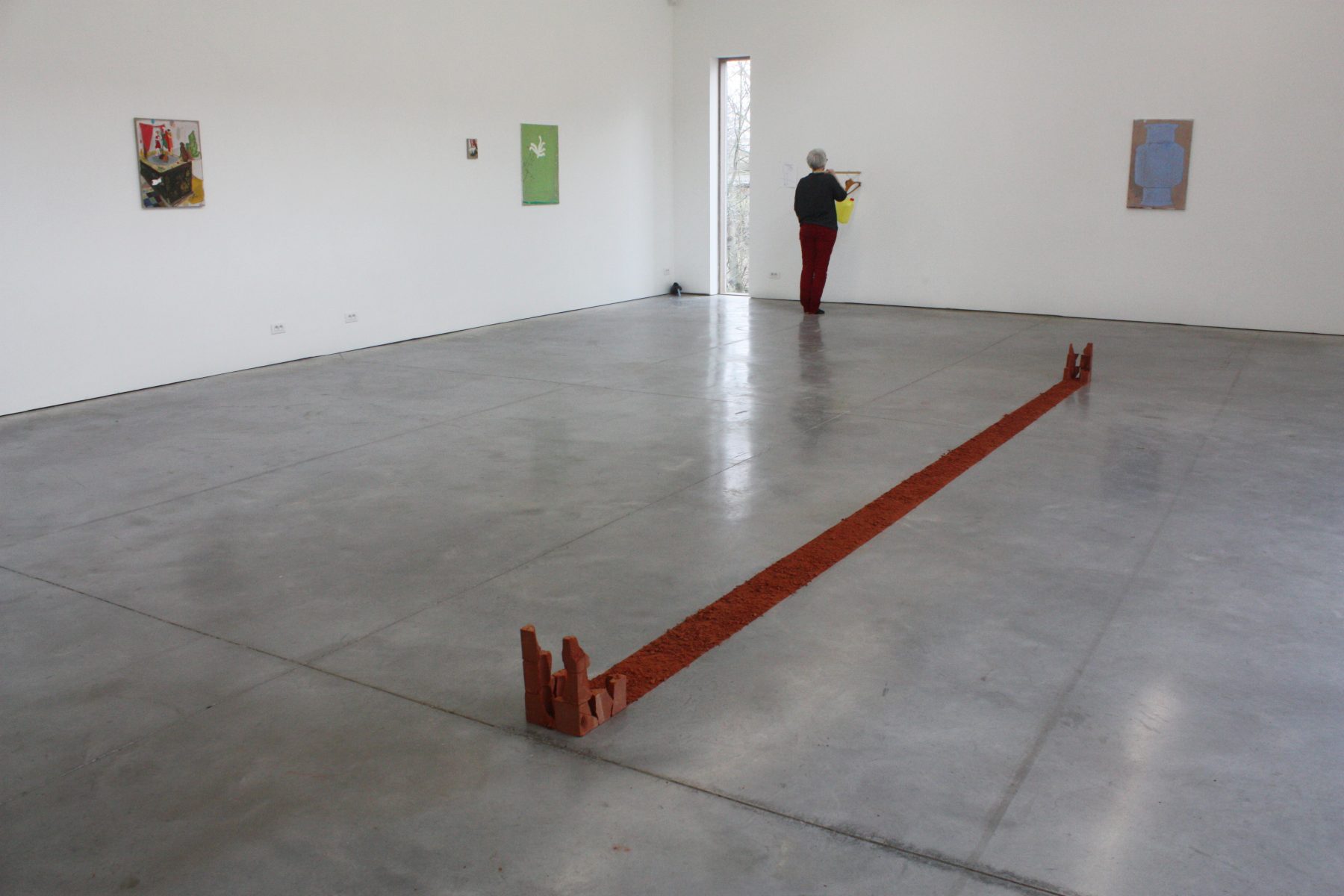 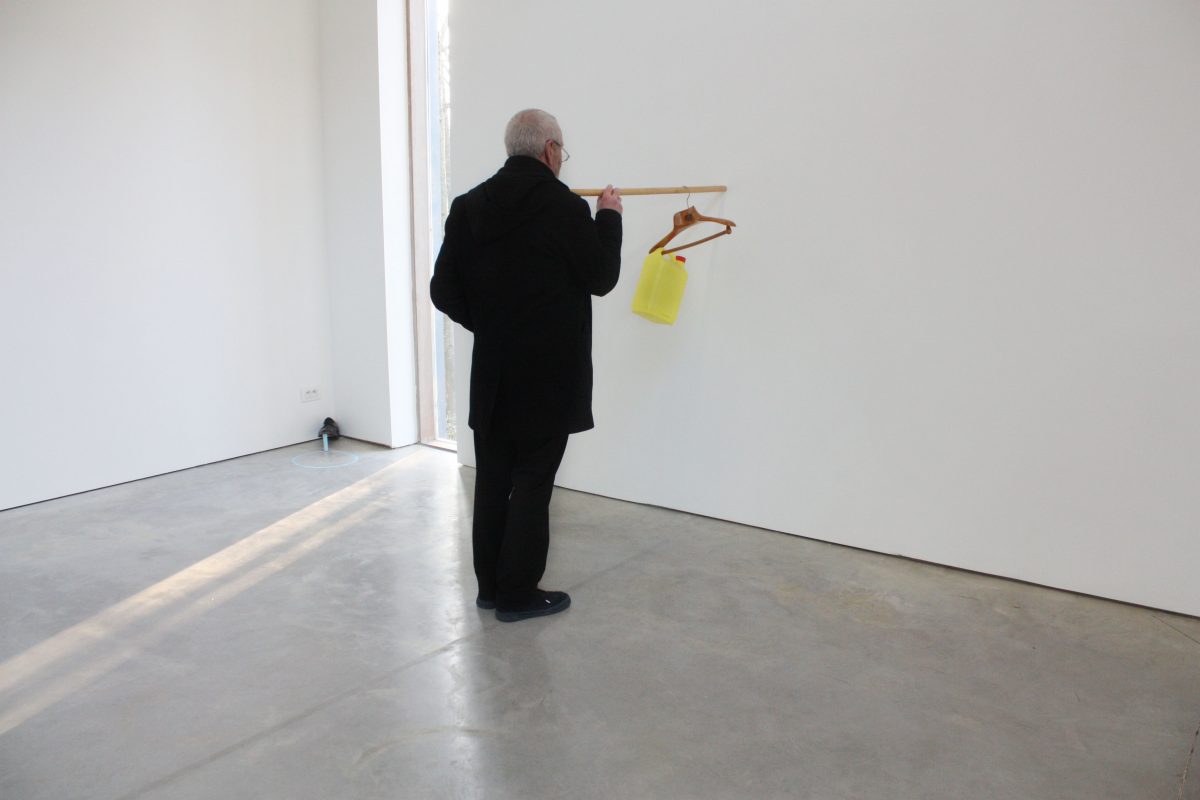 In his work, Alani uses a range of found objects such as antique cornices, rugs, coloured rubber balls, buckets and frames. ‘I find them in shops, at home or on the street. If an object catches my eye, and I think that I can make an artwork with it, I take it to studio,’ he explains, ‘it can sit there for up to a year before I pick it up again.’ With these found objects, Alani makes small, playful interventions. In another room at d’Apostrof, a disconnected iron tap is placed on its side on the floor. Water seemingly pours out of it, creating undulating lines. Elsewhere, a straight and narrow path made of ground red brick crosses the room and is parallel to the walls. Most of Alani’s works are placed flat on the floor, thus introducing an imbalance or hierarchy between the viewer’s gaze and the work itself. ‘The space will inform how I produce the work for an exhibition.’

Alani insists that his work has little to do with Iraq, the Middle East or the Islamic arts. ‘I trained as an artist in Belgium, and see my work as part of a Western contemporary art discourse,’ he says. ‘However, I’ve recently started experimenting with calligraphy and the Kufic script.’ In his recent presentation at the Hopstreet Gallery Window, Brussels, the artist assembled a small tower of red bricks. A ceramic plate with an Arabic inscription is wedged between the bottom bricks, causing the top of the tower to tilt, as if on the brink of collapse. ‘I’m using similar calligraphic motifs in my new projects, but I don’t yet know how these will develop,’ he says. 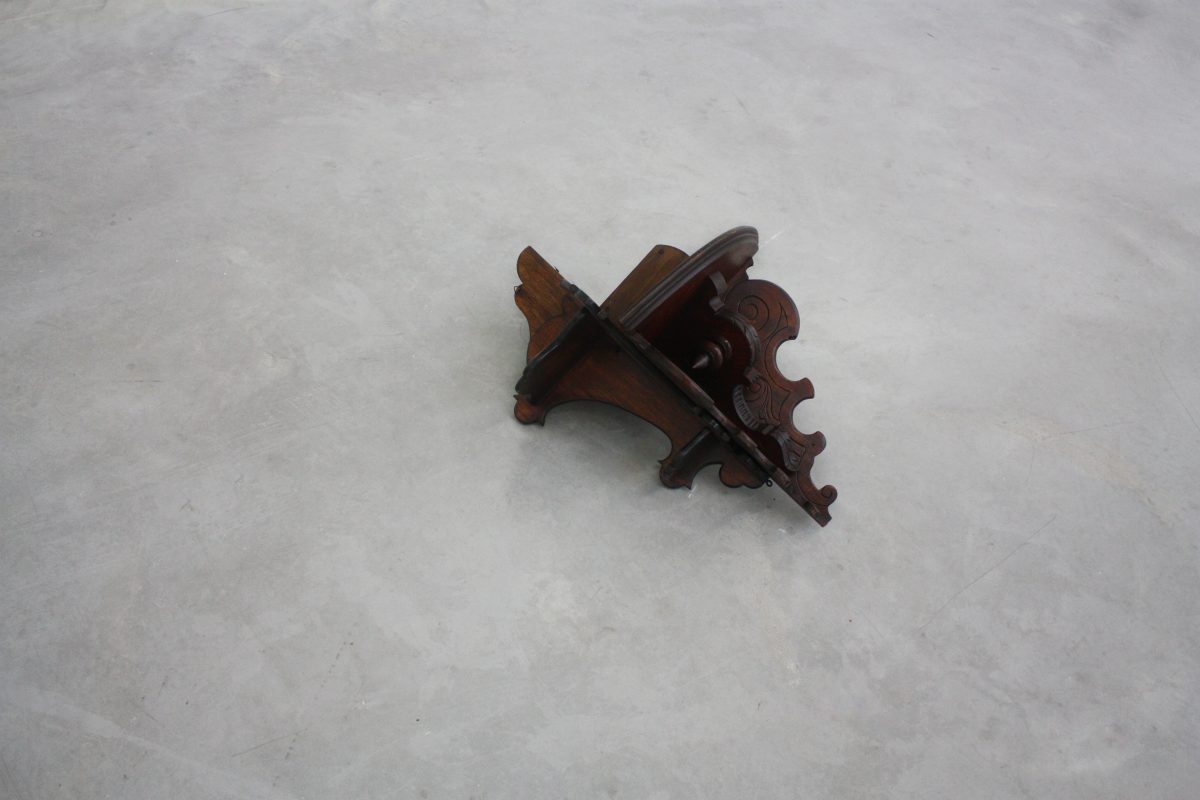 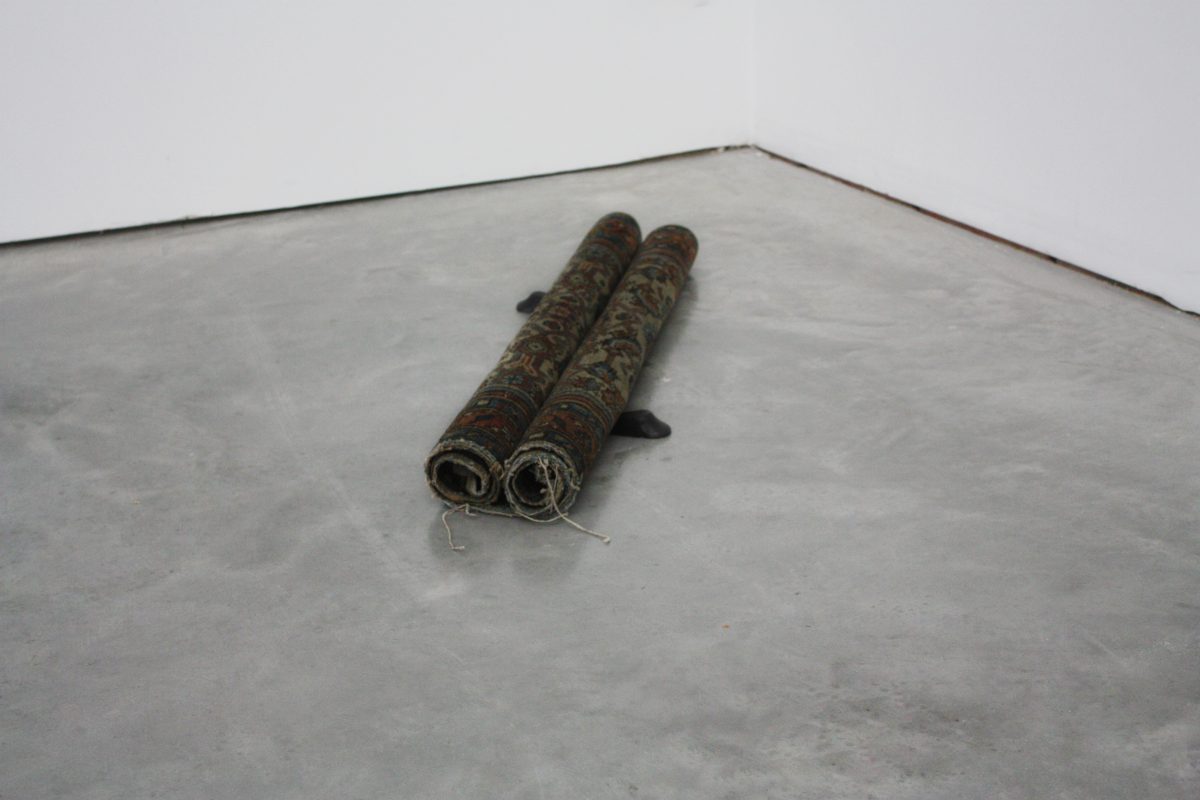 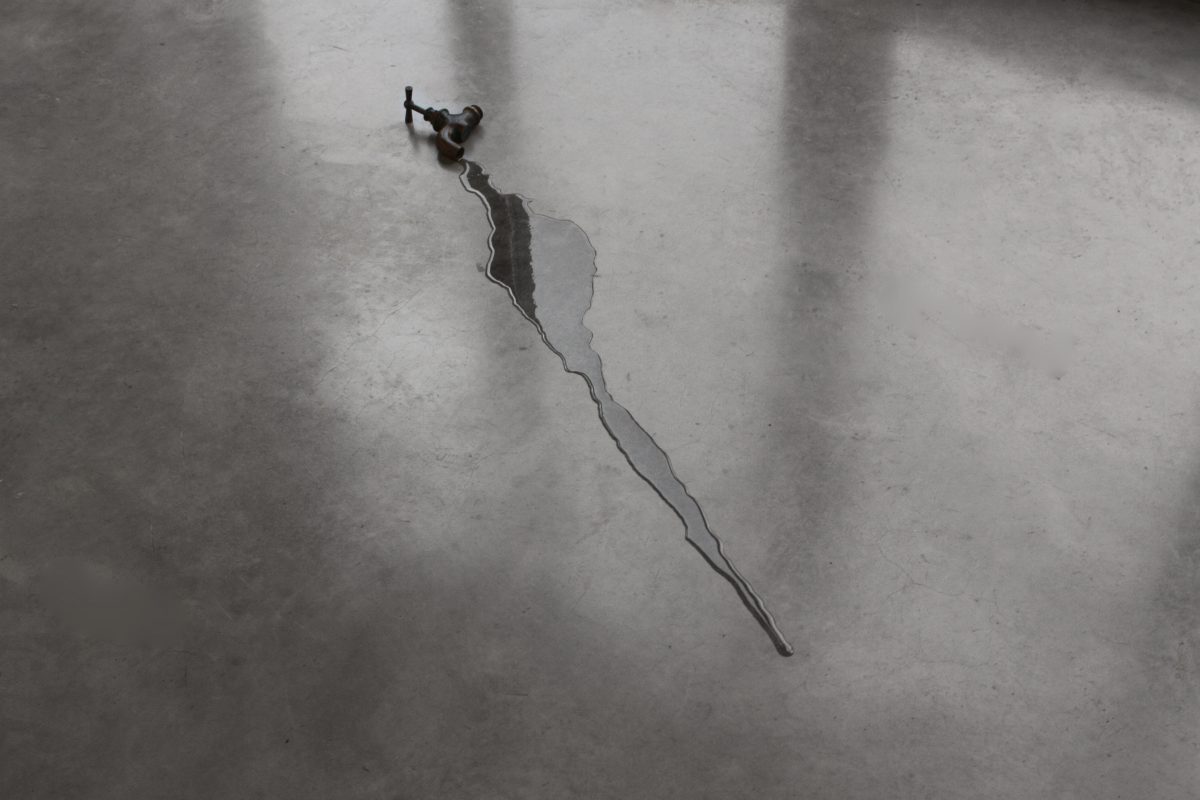 Yet Alani’s work remains committed to simplicity and the purity of mark-making, forms and objects. ‘Visually, I am drawn to geometric shapes and mathematical formulas,’ says Alani. In an earlier series, the artist created abstract installations, which combined straight lines and curves drawn with chalk, with hard and flat surfaces like wooden boards, frames and blackboard. Despite their geometrical shapes and precision, these abstract arrangements are random. They gesture towards a logic which the work itself defies. A similar principle underlines the artist’s presentation at ‘Take This Waltz.’ In another work at the exhibition, a pyramid of coloured plastic rectangular sheets is placed on a cardboard shoebox, which serves as a plinth. ‘These geometric shapes and mathematical formulas don’t have any particular meaning. They remind me of being in a classroom at school and not understanding the lesson.’ 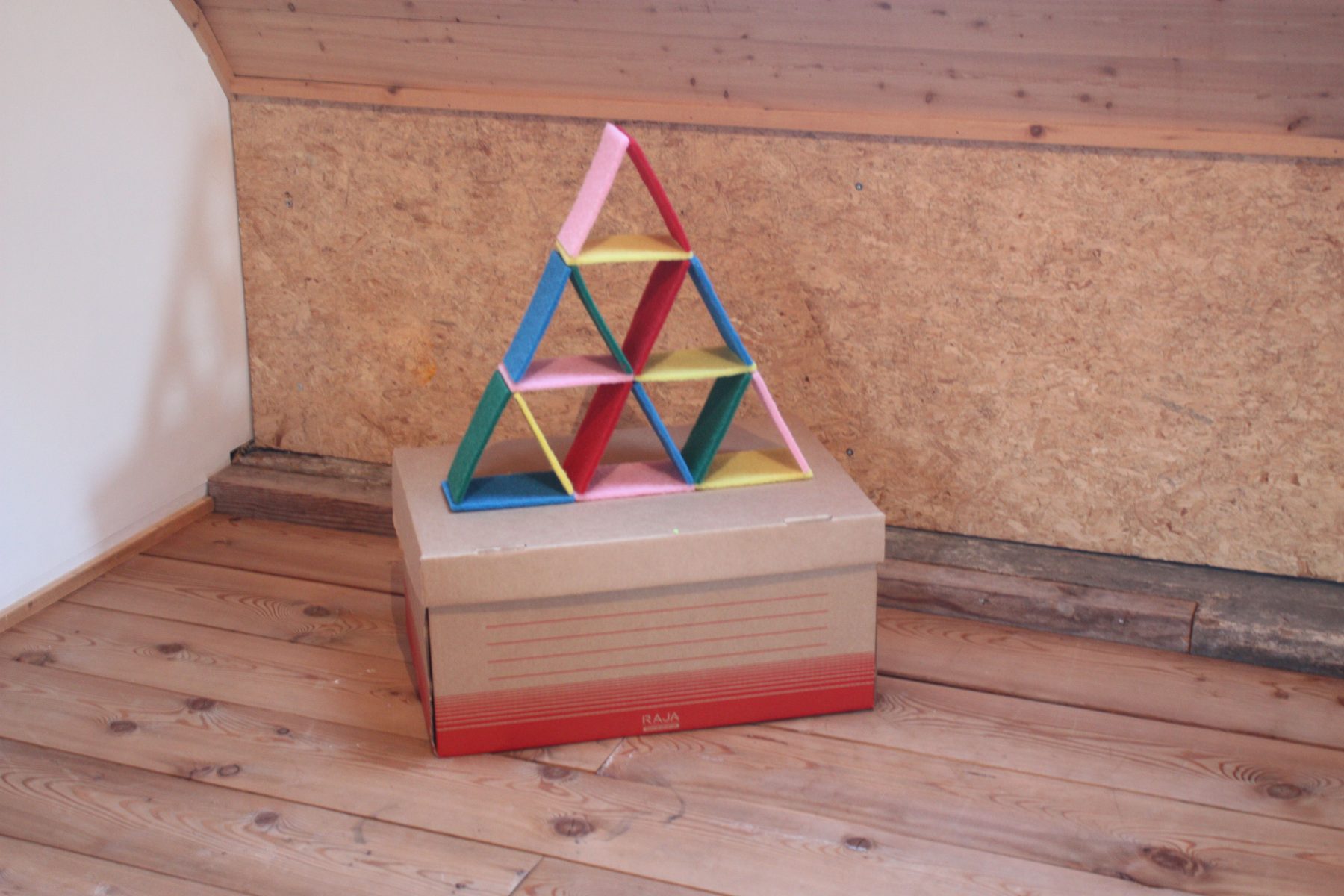