Sadik Kwaish Alfraji (b. 1960, Baghdad) is a leading contemporary artist from Iraq’s diaspora living in Amersfoort, The Netherlands.Trained as a painter and printmaker, he also creates animations and artist books. Alfraji has exhibited his work internationally and his work is part of public and private collections including the British Museum, Mathaf: Arab Museum of Modern Art, Los Angeles County Museum of Art, The Museum of Fine Arts Houston and the Barjeel Art Foundation. Alfraji was commissioned to produce a new work for ‘Archaic’ the Iraq Pavilion at the 57th Venice Biennale. The installation I am the Hunter… I am the Prey (2017) included an animation and a series of ink drawings, both on the artist’s research into old school books, ancient myths, and Islamic manuscripts. Alfraji speaks to Ruya about these drawings, and the different sources that inspired the work. 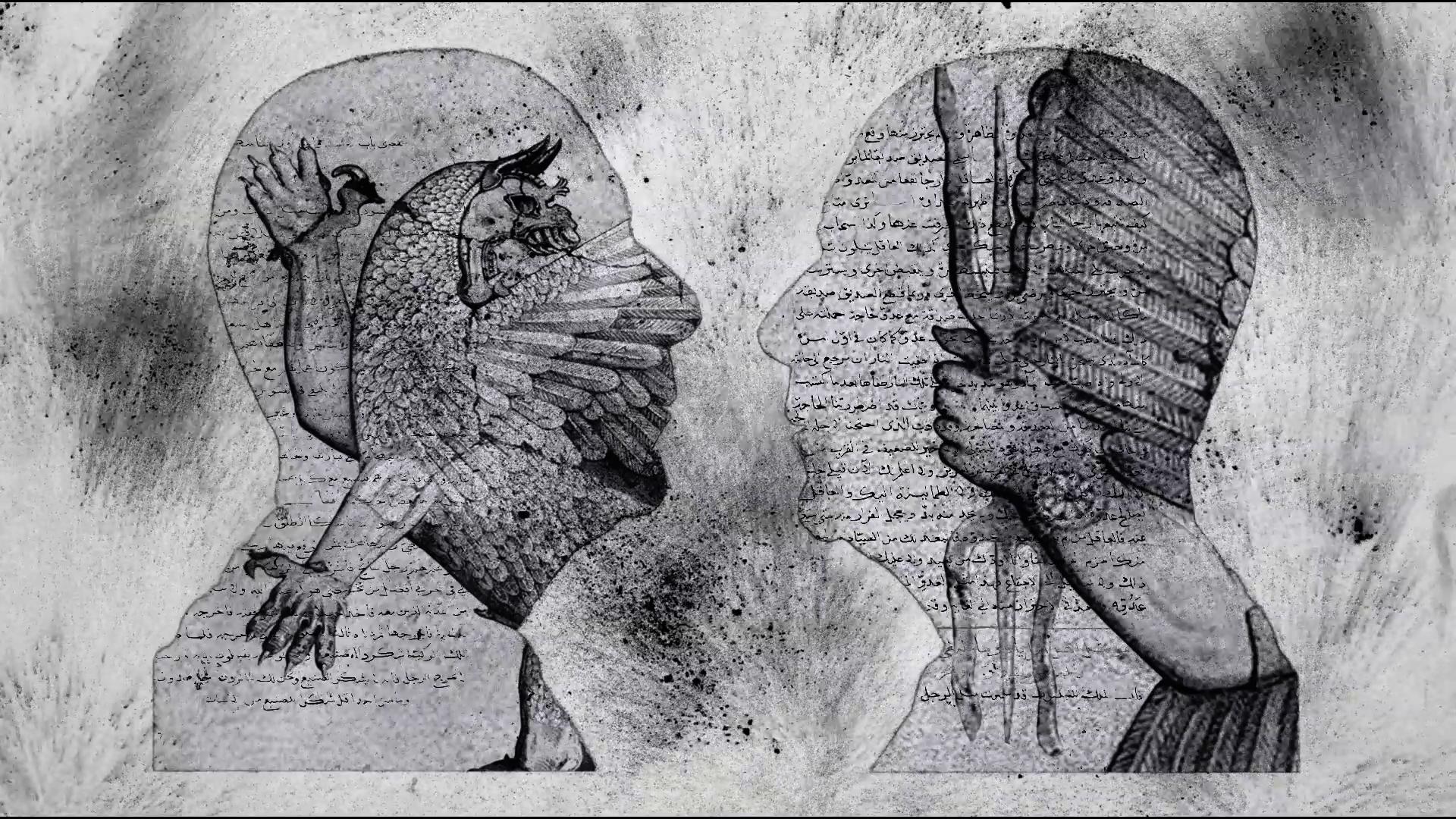 I am The Hunter, I am The prey, animation film, 2017, duration 04:37 minutes. Courtesy of the artist and Ruya Foundation.

Sadik Kwaish Alfraji: The relationship between the hunter and prey takes the form of a dialectic relation. There is no hunter without a prey, and no prey without a hunter. At the same time, there is a prey within the hunter, and a hunter residing within the prey. All beings on this earth experience this. My animation seeks to mimic our human experiences within this dialectic. Depictions of the hunt are ancient but they also persist to this day. My work takes the form of visual indexing. The drawings that are reproduced here were inspired by school textbooks, ancient myths, artefacts, fairy tales, Islamic manuscripts, anatomical drawings, cosmologies, signs of the zodiac and the stars. Each tells us something about the hunt.

I was glad and honored when I was asked to participate in this exhibition, and to work on the concept of the hunt within the perspective of the archaic is not far from my practice as an artist . An artist is a hunter in some way trying to capture a certain moment, a thought or an emotion. And in some of my works I was attempting to capture memories of my beloved Iraq, moments, images or sounds … but instead of me chasing my Iraq I was chased and haunted by Iraq – that great ancient Iraq which never rested.

Some people romanticise Iraq before 2003, and others the period before the revolution of 1958. But Iraq was never a paradise. As Badr Shakir al Sayyab has said, ‘not a year has gone by that Iraq stopped feeling hunger.’ There was poverty, isolation and major internal migration from the villages to the cities. My family moved from southern Iraq to Baghdad. Why? Like millions of others, they fled the feudalism of rural Iraq. The dream of a new home took them to the city. The same experience keeps reoccurring, for example my childhood memories of Iraq in the ‘70s are beautiful, but still it was hell for others, many were poor and struggling to feed their families, communist, intellectuals and the artists were also persecuted. Iraq as a concept of homeland has never been realized as there has always been oppression, poverty or absence of justice. Of course, Iraq also saw many periods of flourishing and progress, especially in the fields of education, healthcare and construction. The people of Iraq have always been an asset to its development and achievements in the sciences, art and literature. Even in one of its horrific periods, during the Iran-Iraq war in the ‘80s, which I experienced, Iraq was a living hell, but war did not stop the Iraqi from being an achiever. 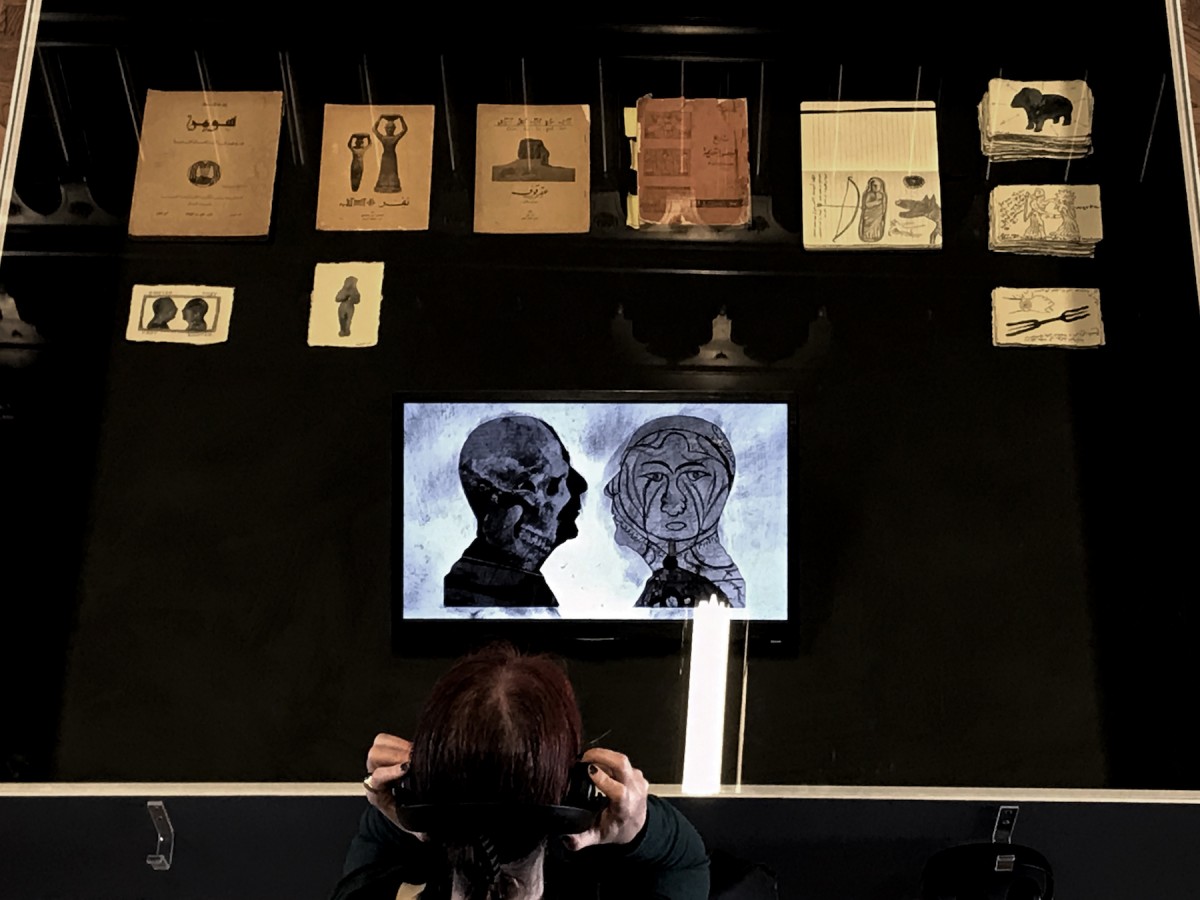 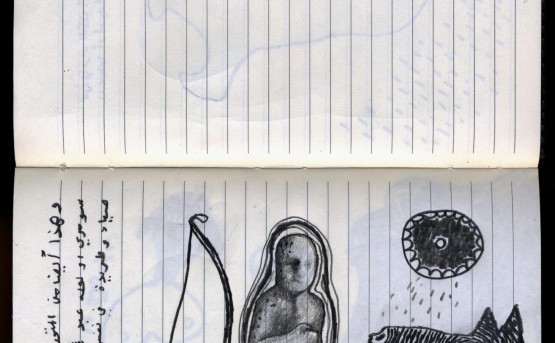 About Hunt, About Human, Dairy notes, 2017, 20.5x14cm. Graphite pencil on notebook paper. Courtesy of the artist and Ruya Foundation. 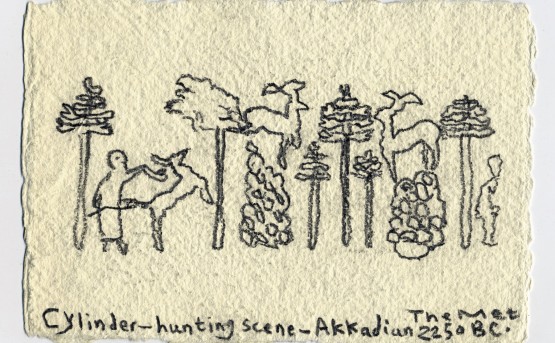 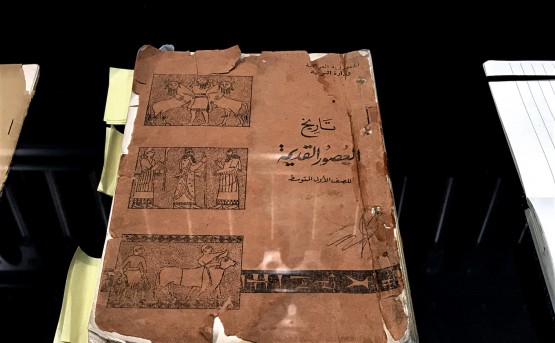 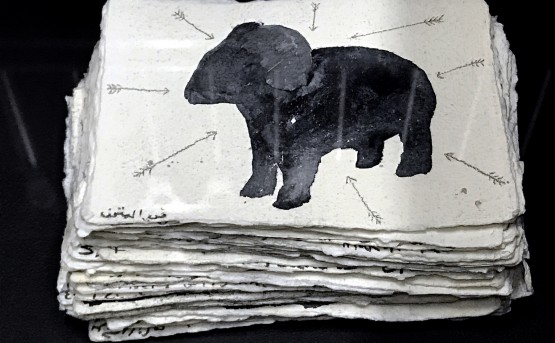 Kitab al ‘osur al qadima, (The book of ancient heritage) Taha Baqir, Fouad Safar and Ahmed Yaqoub Al Shamsi (1967)
When I started the project, I immediately went back to an old school book about our ancient civilisations, which was written by a committee from the Ministry of Education of Iraq, headed by the archaeologist and historian Taha Baqir. I asked Ms. Furat al Jamil from Ruya’s Iraq office to find it for me at a secondhand bookshop in Baghdad. I read the book in the first year of middle school and I loved it. My enquiry into representations of the hunt, across ages and civilisations, followed naturally from that period. 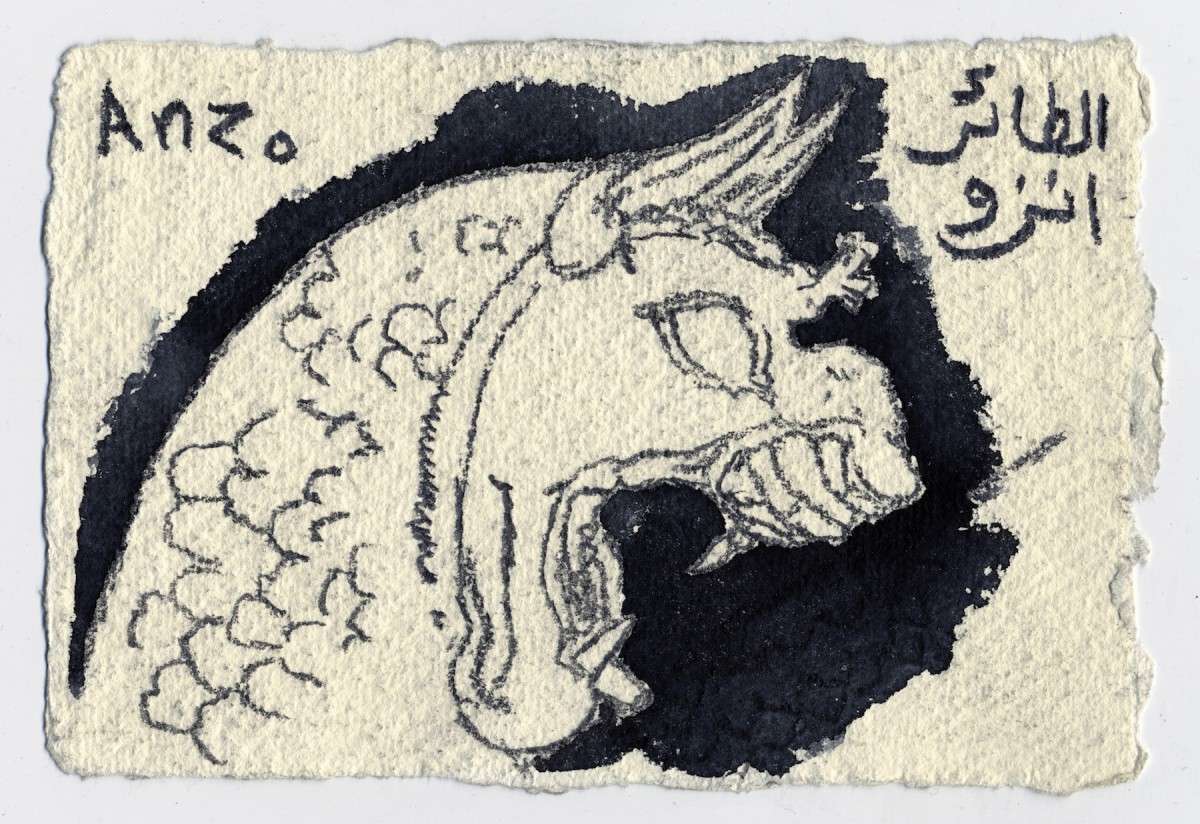 Drawing of Anzû taken from a Neo-Assyrian wall panel relief. About Hunt, About Human, Drawing, 2017, 14.5x10cm. Graphite pencil, ink and water color on handmade paper. Courtesy of the artist and Ruya Foundation.

Anzû and Ninorta
The animation ends with a passage from the ancient Iraqi myth of Anzû and Ninorta: ‘His heart full of courage, he went forth to the mountain like a noble fighter’. In the battle with the great monster Anzû, King Ninorta is struck down. He gets a message from the Gods and his heart fills with courage. Ninorta runs to the mountains to defeat Anzû. This text highlights our human condition. We are always fighting and always brought to the ground, yet we get back up and continue. This is life. 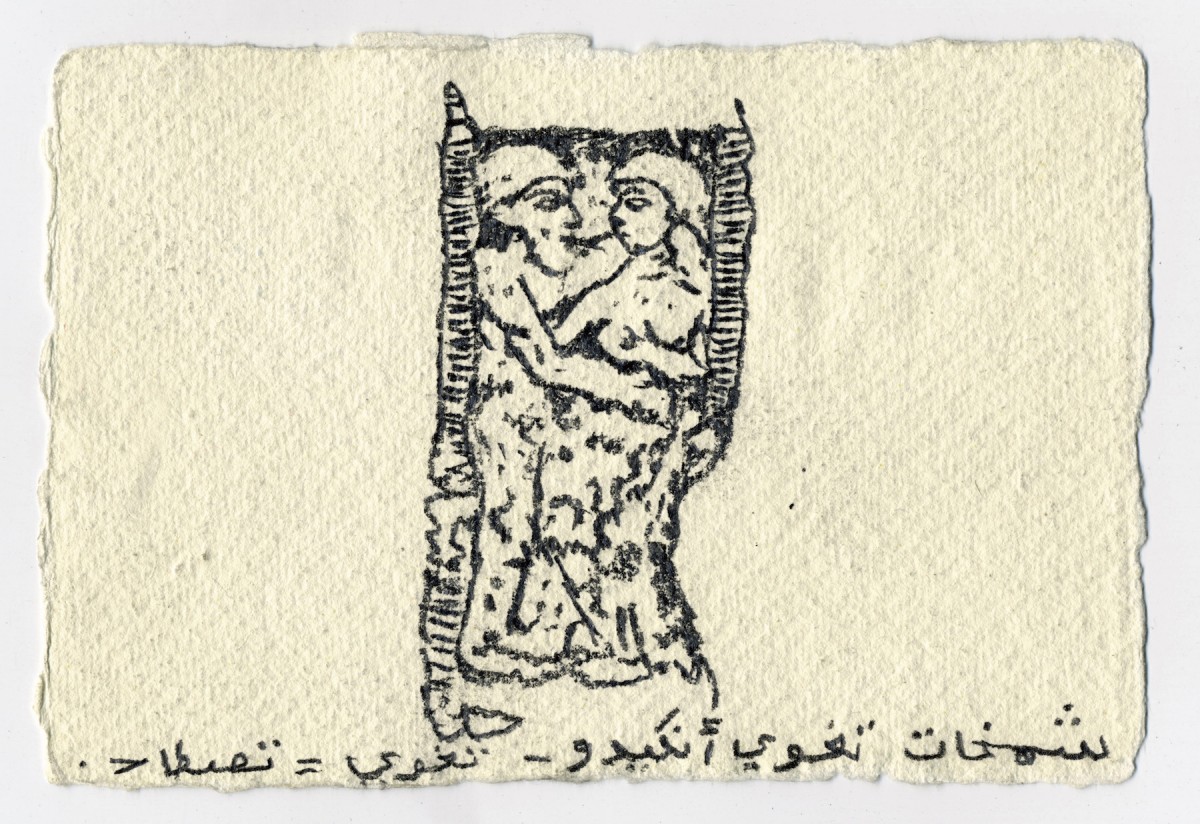 Drawing of Shamkhat and Enkido taken from a Sumerian relief. About Hunt, About Human, Drawing, 2017, 14.5x10cm. Graphite pencil, ink and water color on handmade paper. Courtesy of the artist and Ruya Foundation.

Gilgamesh and Enkido
In the Akkadian epic of Gilgamesh, Enkido is a savage who lives in the wild and Gilgamesh a King with a great civilisation. Gilgamesh wants to befriend Enkido but he cannot bring him into the city. He sends the prostitute Shamkhat, who is of sublime beauty, to seduce him. Gilgamesh believed that making love would make Enkido civilized. Love and seduction here are kinds of hunting 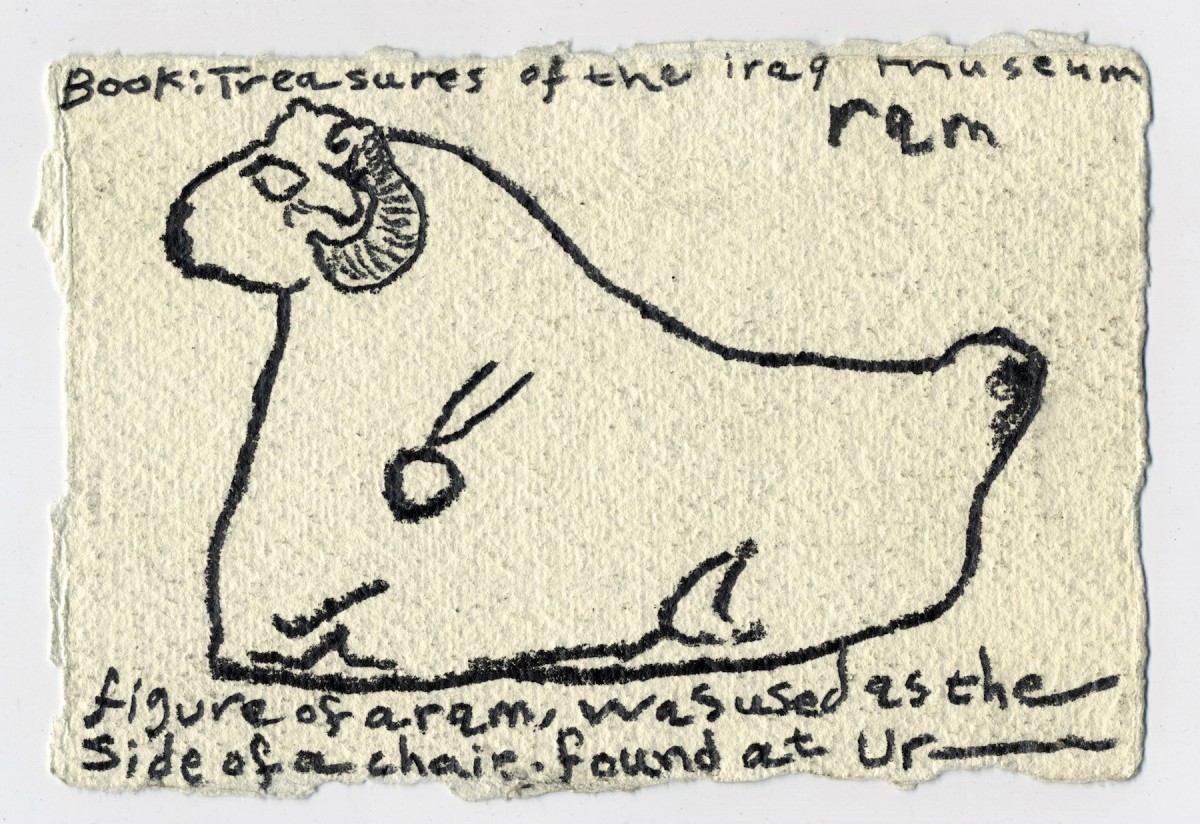 Treasures of the Iraq Museum, Dr. Faraj Basmachi (1979)
Treasures of the Iraqi Museum is a great and rich book. I drew many animals, creatures and objects from it. A fascinating collection indeed. I didn’t follow a certain chronological order or historical periods I just let the shapes and figures of the hunt elude me … or be hunted by them. I was the prey in this case! 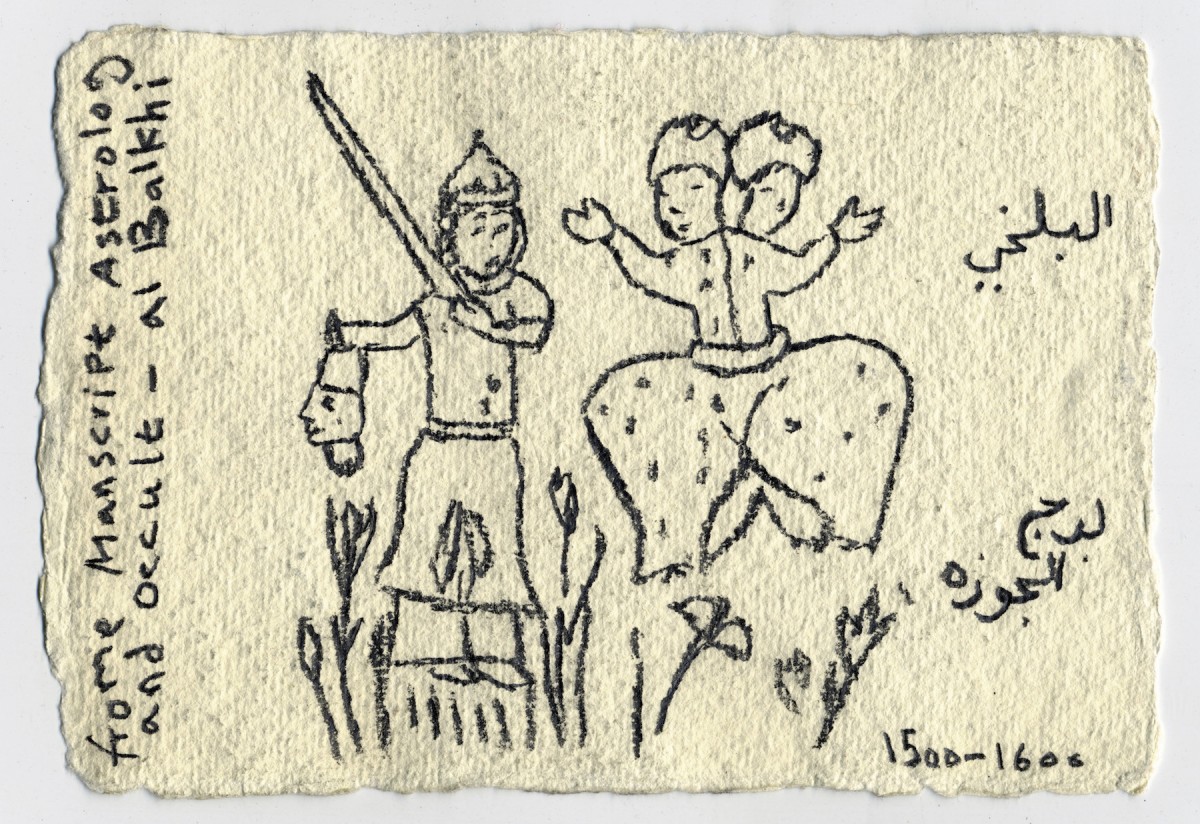 Kitāb taḥāwīl sinī al-‘ālam, Abū Maʿshar al-Balkhi, (c.848)
The work of Persian astrologer Abū Maʿshar (787- 886) was read beyond the Abbasid courts of Baghdad, and translations of his work influenced scholarship in Western Europe. Strikingly, Abū Maʿshar portrays the signs of the zodiac in different hunting scenes. The Gemini pictured here is beheading a man. 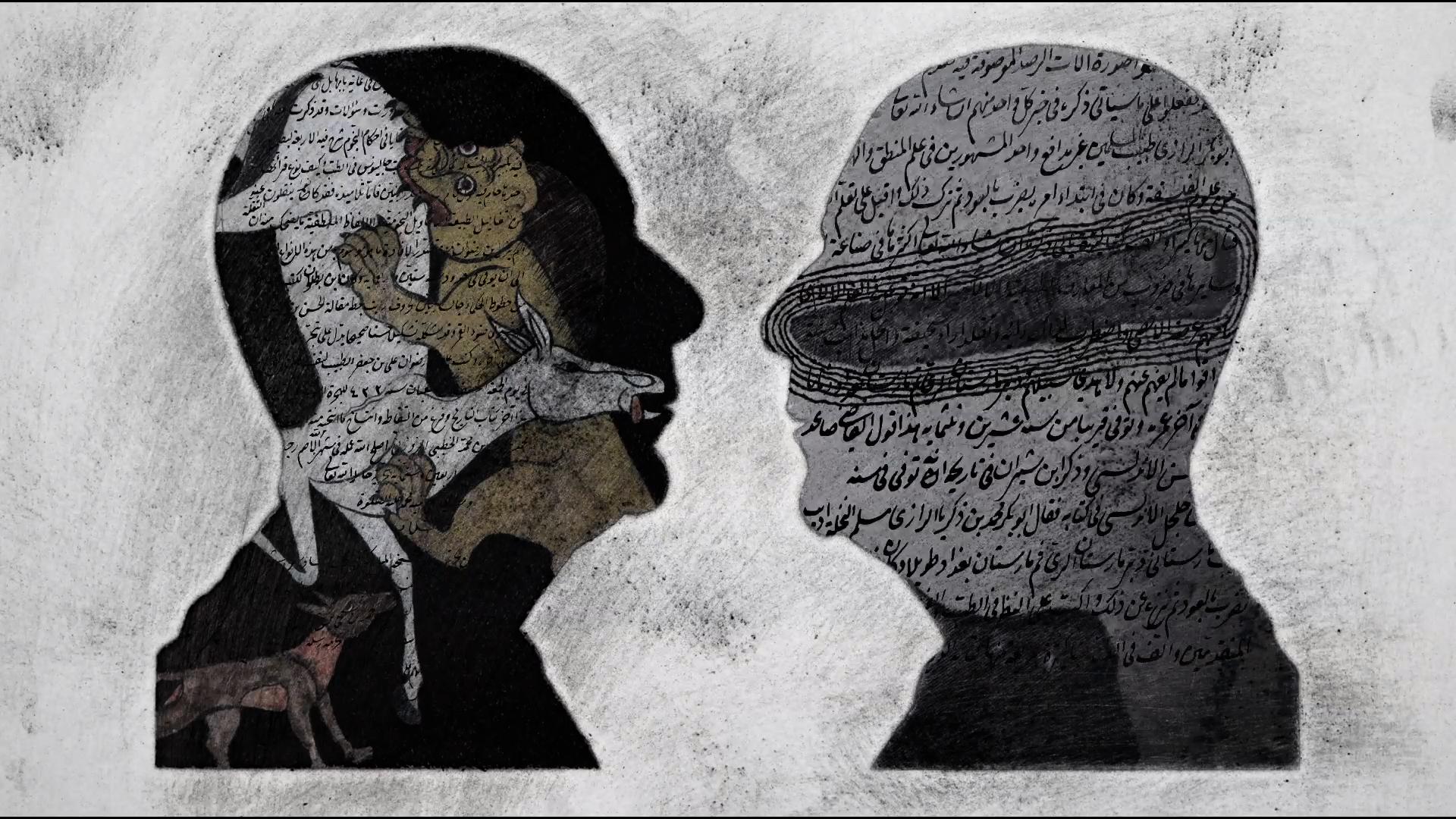 Illumination from Kalīlah wa dimnah appears in this still from I am The Hunter, I am The prey, animation film, 2017, duration 04:37 minutes, courtesy of artist & Ruya Foundation.

Kalīlah wa dimnah, Ibn al-Mukaffa’ (c.700)
The original Sanskrit version of these fairy tales is known as the Panchatantra. They were translated to Persian, and then later to Arabic, by Ibn al-Mukaffa. In Iraq, we learn these tales from a young age. They contain everything – humans, animals, love, sex, hunting, war – all the things and themes that I am dealing with in this work. 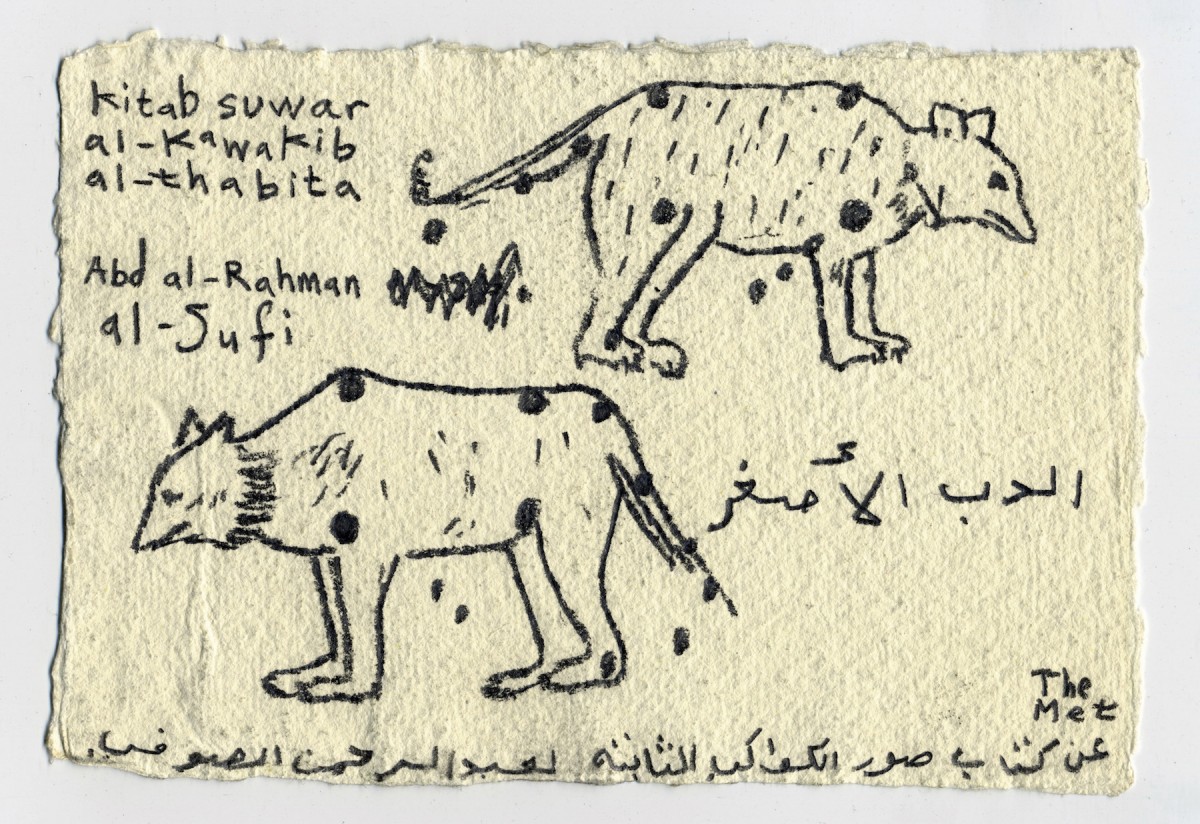 Kitab suwar al-kawakib al-thabita (Book of the Images of the Fixed Stars), ’Abd al-Rahman al-Sufi, (c.964)
Astronomers such as the Persian scholar Abd al-Rahman al-Sufi (903 – 986) named the stars after animals that we can hunt and domesticate. Sometimes they named them after women, such as the Gemini. Those men gazed at the stars and when they documented their findings, they chose the names of living beings over a rigid mathematical description. In my opinion, this was an attempt to bridge the distance between themselves and this unreachable existence in the sky, and to assert their obsession as hunters of the stars. 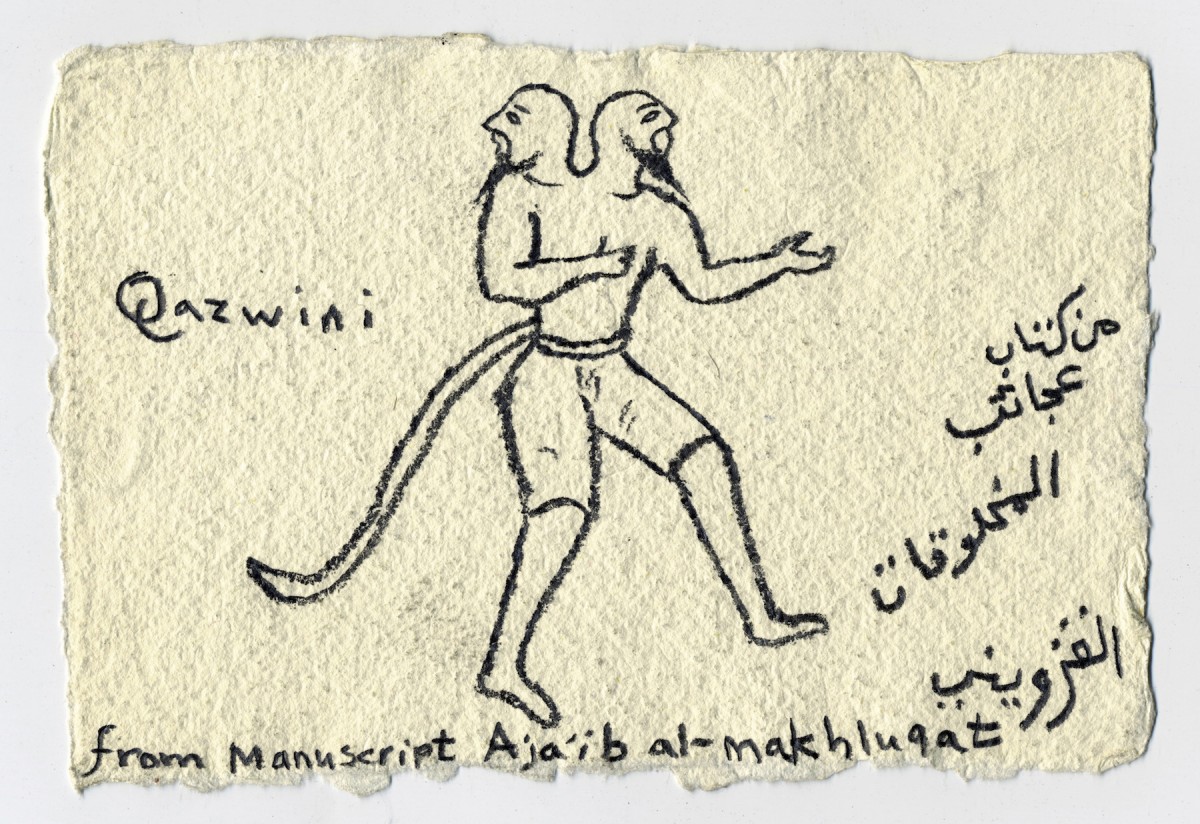 ʿAjā’ib al-makhlūqāt wa gharā’ib al-mawjūdāt (The Wonders of Creation), Zakariya al-Qazwini, (13th century)
So much of Zakariya al-Qazwini’s (1203-1283) famous cosmography is fantasy. But the hunter and prey also appear here, as a united identity, in this two-headed creature. 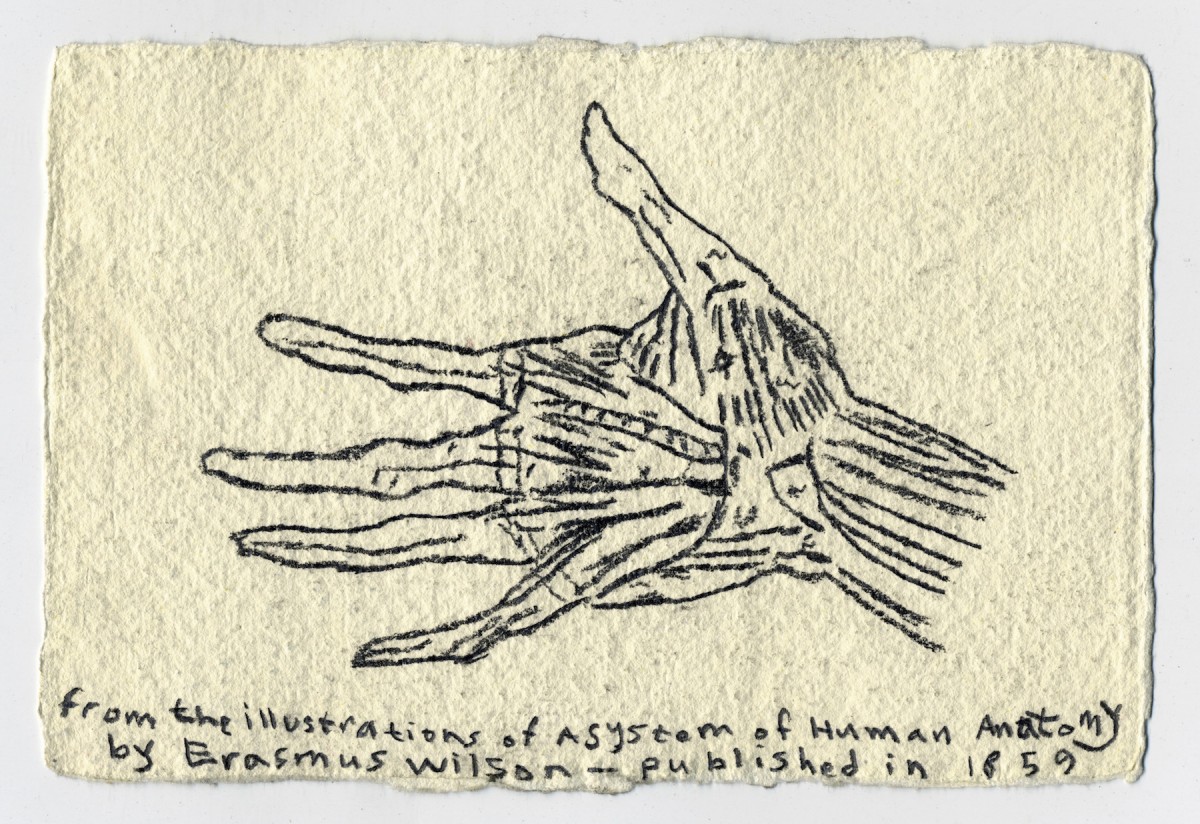 Tashriḥ badan al insan (The Anatomy of the Human Body) by Mansur ibn Muhammad ibn Aḥmad ibn Yusuf (1390)
Anatomical drawings of Islamic manuscripts played an important role in my research. I found these drawings and studies so beautiful. The human body is our first tool as hunters. This prized body also turns us into prey.

The Anatomist’s Vade Mecum: Systems of Human Anatomy 1859, William James Erasmus Wilson (1859
Most of my sources were from Iraq, but there are a few from the region and also from Europe. In Wilson’s drawing, the lines of the hand remind me of the anatomical drawings from Islamic medical manuscripts. I chose the hand here because it is a hunting tool. 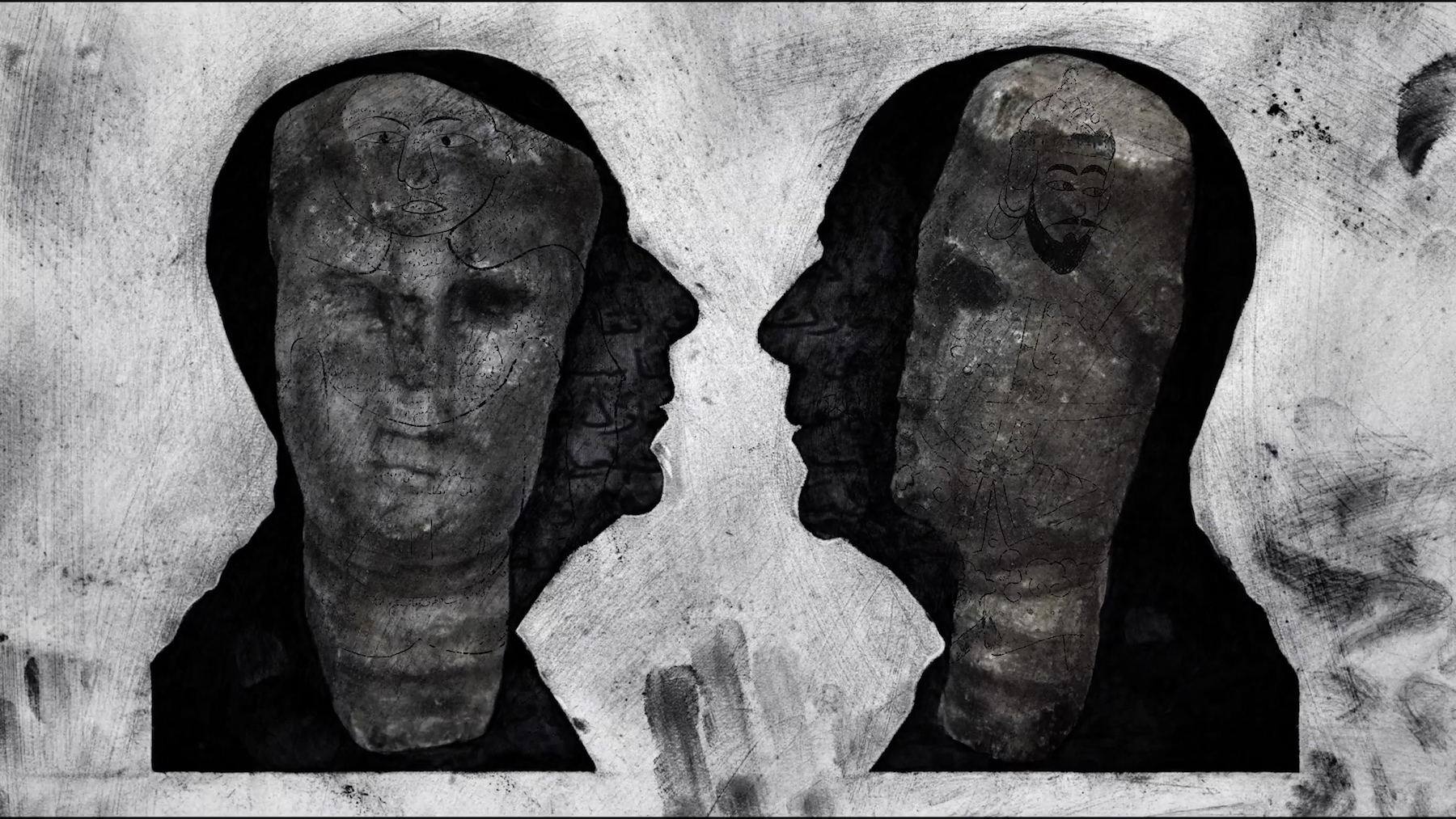 Still from I am The Hunter, I am The prey (2017). Courtesy of the artist and Ruya Foundation.