Ruya Notebooks is a new educational publishing initiative that will release two titles a year. For each Notebook a well known artist, curator or critic will select five short texts that they have identified as fundamental to their creative development. These texts will then be translated into Arabic, in most cases for the first time, and the resultant Notebook distributed for free to artistic communities in Iraq and the wider Middle East. The aim of the project is to provide resources to schools, communities and individuals who have previously had little or no access to educational art texts. The series will launch on 19 January 2017 in Erbil, to coincide with the first re-staging inside Iraq of Ruya’s 2015 Venice Biennale exhibition ‘Invisible Beauty’. 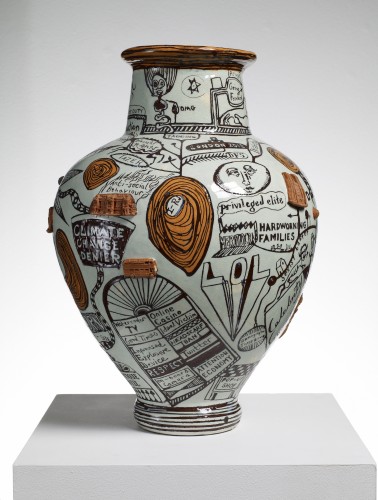 The first title in the series will be Art and Its Objects: 5 essays on contemporary art selected by Jonathan Watkins. 2,000 copies will be printed initially, with the eventual aim of making the resource accessible to as many Arabic speakers as possible. Jonathan Watkins is Director of Ikon Gallery in Birmingham and a collaborator of the Ruya Foundation. His Ruya Notebook will include a new introductory essay by Watkins entitled ‘Art and its Objects’ and the following five texts:

The impetus for the launch of Ruya Notebooks was twofold. Firstly, it is the Ruya Foundation’s mission to bridge the gap between the conflict-ridden regions of the Middle East, particularly Iraq, and the rest of the world. Despite greater access to information brought about by the Internet and other technological advancements, access to good educational art texts in the Middle East is still restricted by socio-economic factors, one of the most limiting being the ability to speak a Western European language. Secondly, access to scholarship is generally constricted in the region, inhibiting the ability of creative communities to think freely and without censorship. Combating these issues requires a host of developments, including access to good schools and teachers, and well researched and updated curriculums and methodologies. Ruya Notebooks aims to contribute in some way to this effort.

In the foreword to the first Ruya Notebook, the Foundation states:

“It has come to our attention that most texts on art, however diverse, do not exist in Arabic. This is the bridge we are constructing, notebook-by-notebook, as we seek leading international art professionals, artists and writers to share their knowledge and expertise with Arabic speakers. It is an experiment. We think it is an important one.”

A number of publishers and writers generously waived reproduction fees to enable Ruya Notebooks to launch. Initially Ruya will publish two titles in the Notebooks series each year. Future participants will include the artists Hiwa K and Kader Atia, curators Marie Muracciole, Venetia Porter and Aneta Szylak, and the artistic director of S.M.A.K. (Museum for Contemporary Art) Philippe Van Cauteren. Selected texts will include pieces by Irit Rogoff, Hito Steyerl, Gayatri Spivak and Mikhail Bakhtin, amongst others. Details of the second title for 2017 will be announced in the Spring.