Rozhgar Mustafa is a video and performance artist based in Sulaymaniya. After training as a painter at the Institute of Fine Arts and the University of Sulaymaniya, Mustafa soon began experimenting with video, performance and ready-made objects to make works about women and womanhood in Iraq. In 2011, Mustafa arranged for a group of protesters to carry 5 plastic mannequins at a rally against the Kurdistan Regional Government in the main square of Sulaymaniya. Few women took part in these protests for moral and religious reasons, as well as concerns for their safety, and Mustafa’s performance aimed at making the presence of women more visible. Mustafa moved to London in 2012 where she completed an MFA from the Chelsea College of Art and Design. Since returning to Iraq, she has been active in the art scene in Sulaymaniya. In November 2016, Mustafa exhibited two of her own video works at the Shaab Teahouse. She speaks to the Ruya Foundation about her work and the exhibition.

In November, you screened two artworks about women and the violence against women at the Shaab Tea House. This teahouse is well-known as a meeting point for Sulaymaniya’s artists and intellectuals. So what was new or special about your exhibition?
The Shaab Teahouse is a traditional teahouse in Sulaymaniya. It is a male-dominated space, and though women are allowed to go there, most of them choose not to, in keeping with local tradition. I often stop there to drink tea when I go to the market, and in the past I have volunteered to help in the kitchen. Men go to the teahouse to pass the time. They play dominoes, chess or backgammon and drink tea. They usually talk about politics or the latest news. There is no creativity and nothing to challenge their perceptions. Most of the people who come to the teahouse are unaccustomed to video art and performance pieces. So as well as discussing issues affecting women in the Kurdistan region and in Iraq, my works were introducing a new kind of artistic experience, that challenges the daily habits of the teahouse.

How did the regular visitors to the tea house respond to the installation?
They were surprised, a little bit shocked, but also engaged and curious. Most of them were expecting to see a long movie, not a short video piece that lasts less than 10 minutes. They asked me what I was trying to say in my work, and what I was trying to achieve. Some asked me if it was art, others took the videos and their message very seriously. Even local artists who attended the screenings were curious about the works. The experience was fun and difficult at the same time. 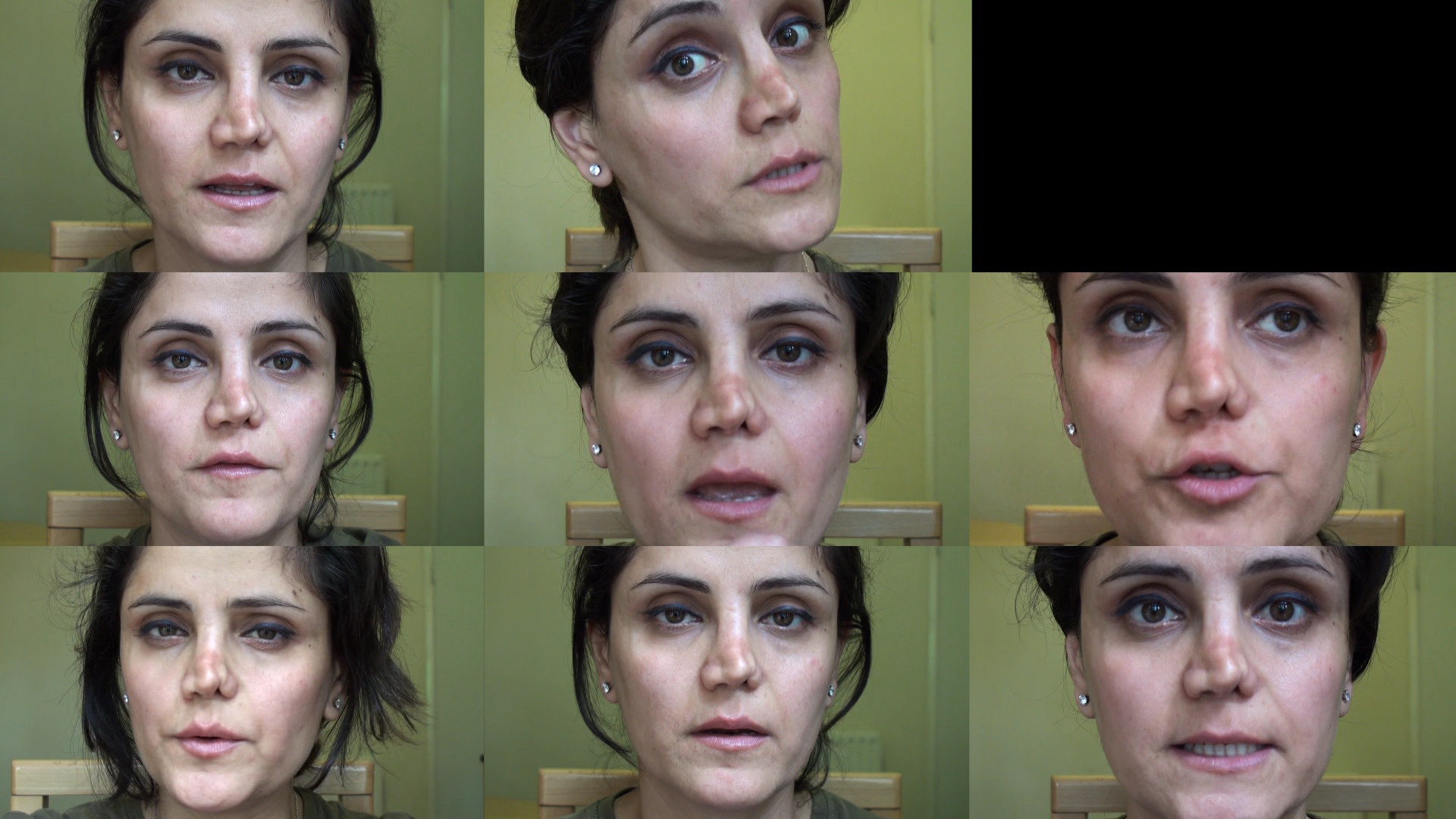 Screening of ‘I Am Similar to My Father’ (2013) at the Shaab Teahouse. Courtesy of the artist.

Can you tell me about the works that you exhibited, ‘I am similar to my father’ (2013) and ‘Baqwrbantm’?
The video piece ‘I Am Similar to My Father’ (2013) was the final project of my graduate studies in London. It includes nine headshots of myself, speaking, laughing, crying and gesticulating. What starts off as a calm video becomes increasingly noisy and dark. In each video, I repeat a word or a sentence, such as the expression ‘I am similar to my father’. I also film myself repeating in Kurdish: ‘Kurdistan is the south of Turkey and the north of Iraq’. Meanwhile, ’Baqwrbantm’ is a new work that I made in Iraq. The title means ‘I Sacrifice Myself for You’ in English, and I repeat this in Kurdish throughout the piece. In the video, the headline of a Kurdish language newspaper announces the killing of an anonymous woman in Iraq. There is a tea cup on top of the newspaper, which I start to stir angrily and aggressively after reading the headline, repeating the word ‘baqwrbantm’.

Given that these two pieces are both noisy and politically engaged, was it difficult to convince the owners of Shaab teahouse to screen them?
Not at all, the owners of the teahouse are friendly and open-minded. They have so many friends in Sulaymaniya, and they welcome everyone at their teahouse, especially foreigners. They love to engage with different ideas and conversations.

Honour killings and violence against women remain an issue both in the Kurdistan region and in Iraq as a whole. What can artists do to address this?
There are organisations and activists addressing the issue of women’s rights in Kurdistan, but I don’t think it is enough to simply talk about our rights. Artists can provide a more human perspective. Violence against women exists everywhere in the world, and women in Kurdistan have a very weak position in society. It used to be different, when we were living outside of the city and in villages. Women worked in the fields alongside men as their equals. As artists, we need to keep producing more work around the issues that we are facing, and to talk about ourselves and our experiences—not just our rights. 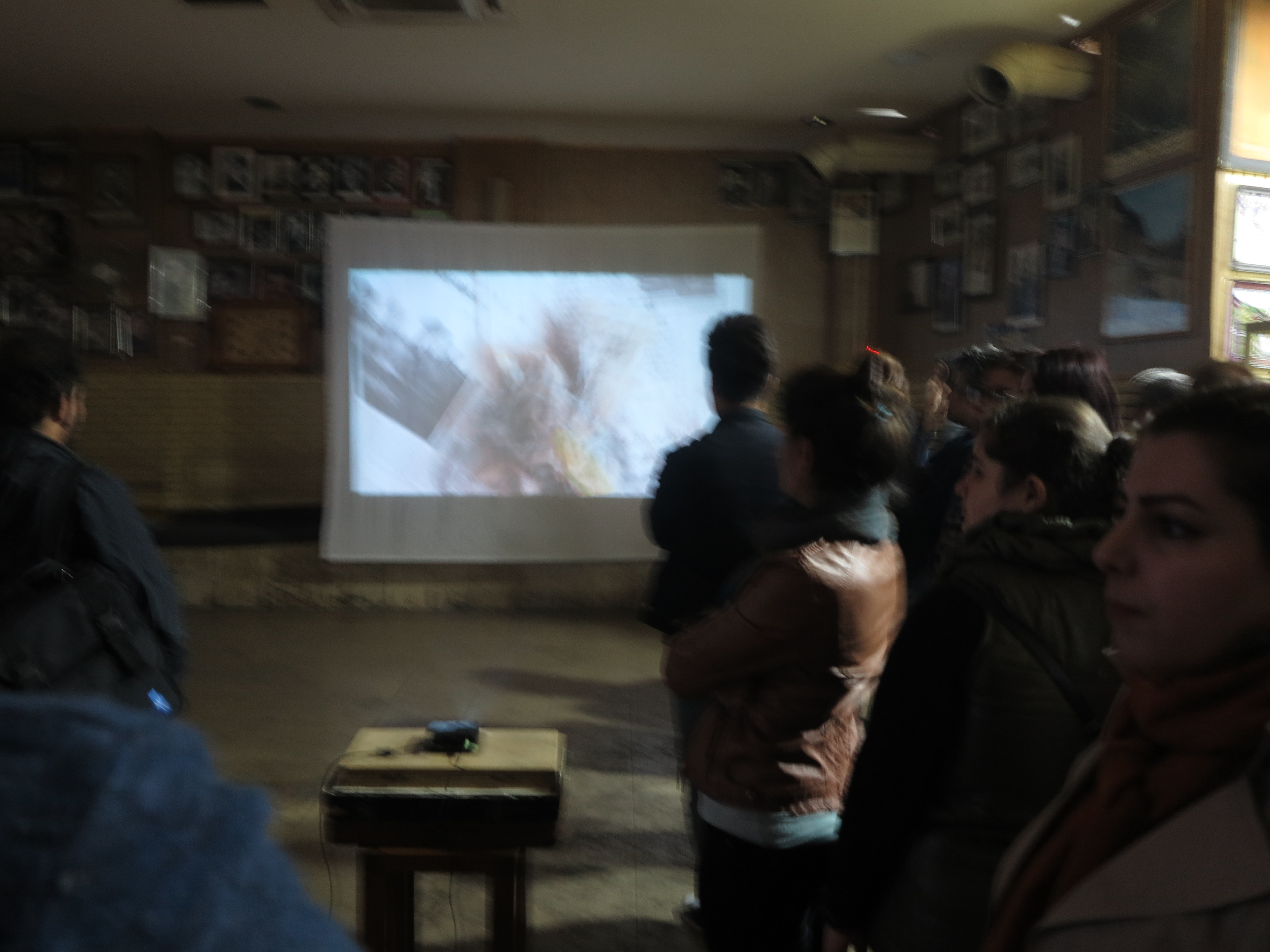 Private view screening of ‘Baqwrbantm’ at the Shaab Teahouse. Courtesy of the artist. 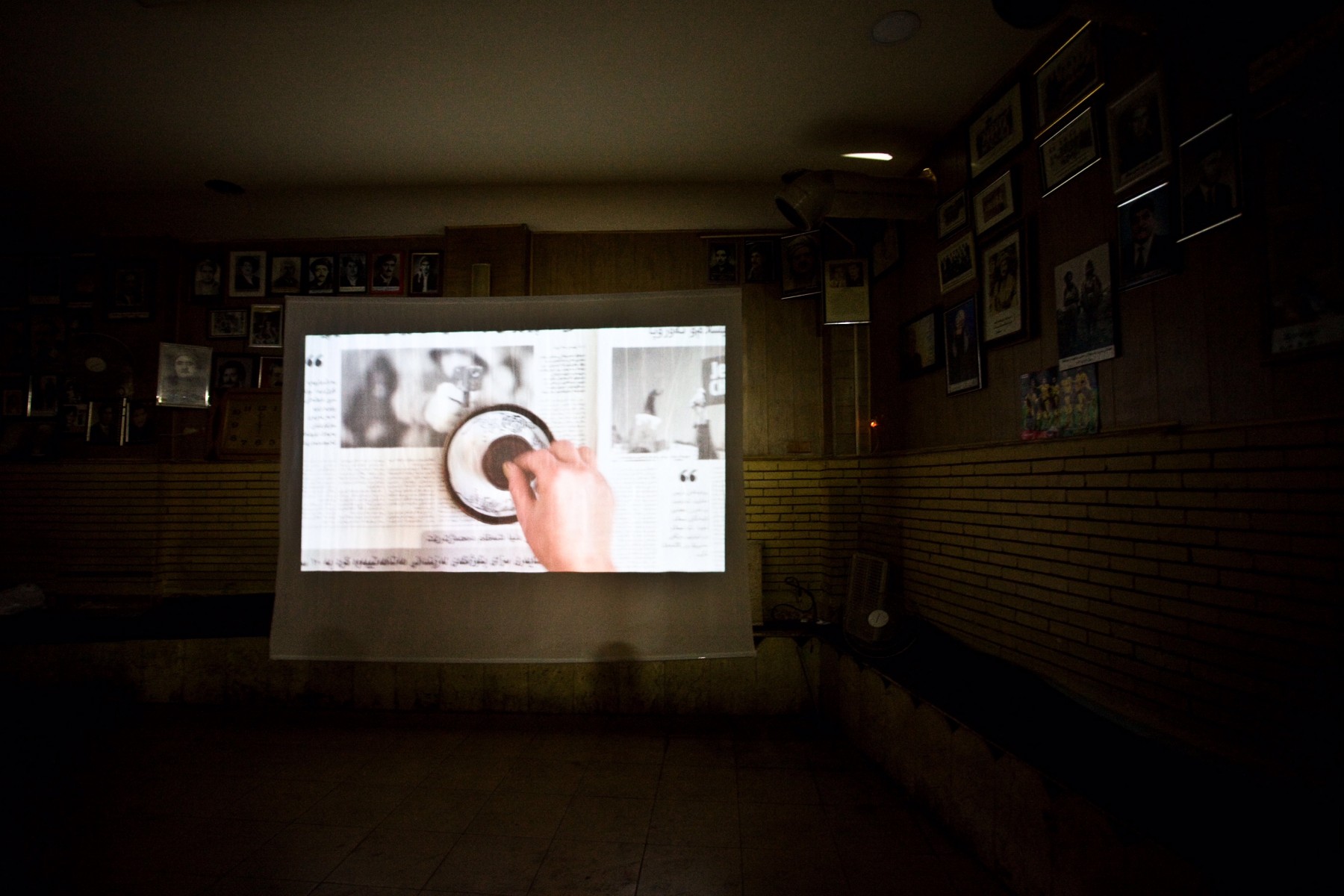 Private view screening of ‘Baqwrbantm’ at the Shaab Teahouse. Courtesy of the artist.

Can contemporary art speak to audiences who are not familiar with its language?
Yes, definitely. The works that I displayed were not easy to understand or familiar to the audiences in Sulaymaniya. However, once I explained the work and the concept, they started to engage with it.

How has the art scene in Sulaymaniya developed in recent years?
There are more contemporary artists and artist-led exhibitions in Sulaymaniya, but the progress is slow. Our educational institutions do not teach contemporary art forms like performance, video art and installation. Recently however, people who studied art abroad have taken up jobs at Sulaymaniya’s art schools, and are trying to change the curriculum. The audience for exhibitions like mine is still small. On the other hand, exhibitions of more traditional forms of art, such as figurative painting and sculpture, attract a huge number of visitors. The opening days will be crowded, but the reception of the works at these exhibitions is too general: the visitors appreciate the beauty without engaging critically or conceptually with the artworks.

You studied on the MFA programme at the Chelsea College of Arts in London. How did you work develop as a result?
I learnt to go deeper into my work, to be strong and to talk about myself. I learnt that it was not shameful to talk about my history or my memories, but that this had to be done in an artistic or critical way. The opportunity to attend exhibitions, at the Tate Modern and the Saatchi Gallery for example, and seeing artworks in the flesh was also important. I don’t think that people can engage with contemporary art if they have not seen the real, physical works in the context of a museum or gallery. This allows you to feel the works and have a journey with them.

What are your priorities now as an artist, since you’ve returned to Iraq?
What struck me the most when I returned to Iraq after three years in London is that almost nothing much had changed. When I was in London, every day was a struggle and a challenge. In Iraq, the places and institutions have stayed the same. This stability is not a good thing, and we need to change things more radically, by holding more exhibitions and producing more work.