Hiwa K (b.1975, Sulaimaniya) is a conceptual artist based in Berlin. He grew up in Sulaimaniya, and fled Iraq in 1996, travelling on foot across the mountains to the Iranian border, through to Turkey, and finally settling in Europe. Over the years, his work has reflected on a wide range of topics, including the experience of immigration, and more recently, contemporary society in Kurdistan. His latest piece, The Bell, 2015, was commissioned by Okwui Enwezor for All the World’s Futures, the official exhibition at the 56th Venice Biennale.

Hiwa spoke to Ruya about his work in August 2014, the interview is below.

You are based in Berlin, but travel often with your projects. Where are you now, and what are you working on? I am in Riga setting up my installation, 1 Bedroom Apartment. It was previously exhibited in Gdansk but on a smaller scale. Then I will be heading to Jordan and New York to present new editions of the Chicago Boys: While We Were Singing They Were Dreaming, a piece which combines a Middle Eastern 70s pop revival band with a study group on the neo-liberal economy.

One Bedroom Apartment recreates a new apartment in Kurdistan, made of a single bedroom, a set of stairs and blank, white walls. How have your recent visits to Kurdistan, having lived in exile for 10 years, informed this work? Sulaimaniya and Kurdistan have changed so much. I sometimes don’t know my way around.There used to be a football field near our house. Now it is a building. Before the 2003 invasion Kurdish society was collective. People shared rooms, pots and pans. Now it is a country copying the Western model of independence. No one has the time for each other. Every day you have plans for a new shopping mall, and society has become increasingly driven by consumerism. Collectivity is a thing of the past, it is associated with the East and the Soviet Union. The installation, which shows an apartment built for one person, reflects the individualism that has settled in Kurdistan since 2003, when a free market economy was set up. 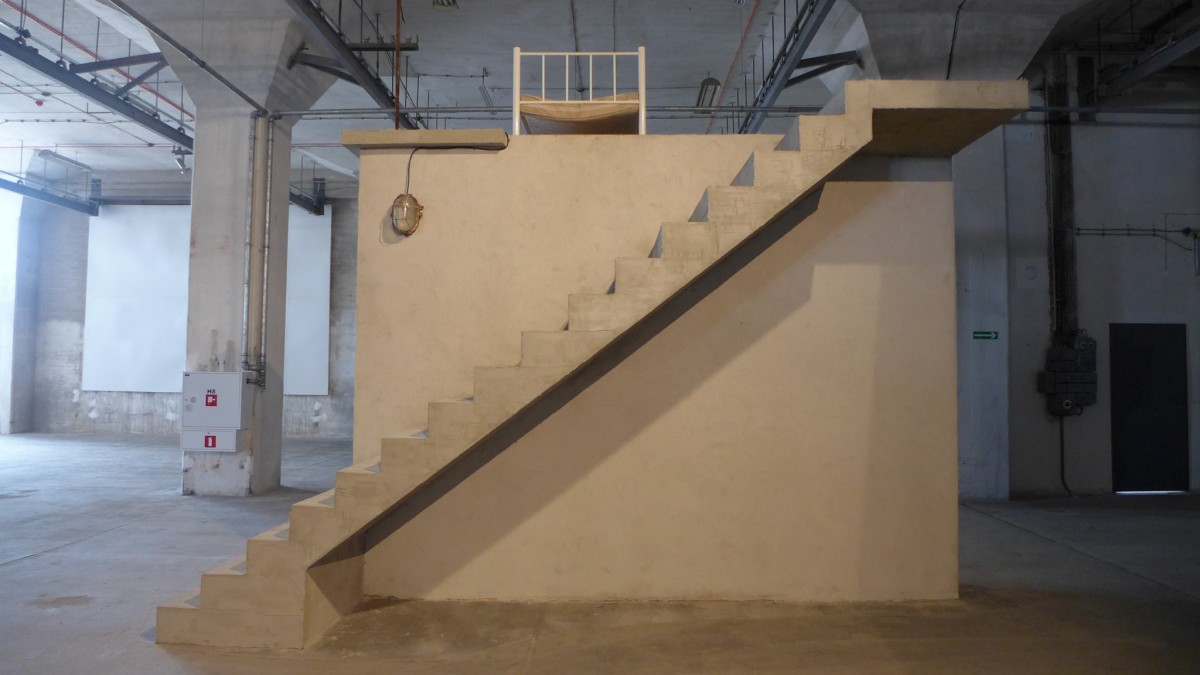 Hiwa K, One Bedroom Apartment, 2014. Courtesy of the artist.

What was the art scene like when you were a student? I didn’t study art before leaving Kurdistan, but I was influenced by the art scene and art professors in Baghdad. Because of the Ba’ath party’s links with the Soviet Union, these artists studied in Moscow and St Petersburg, and came back teaching social realism. This was also the dominant form in Kurdistan until 1991 when we became autonomous. Many artists then came back from Europe and the art became more conceptual. It is only when I went to Europe myself that I realised we were stuck in the 1960s.

What was the first artwork you ever admired? As a child, I was impressed by Renaissance painters. My sister studied psychology in Baghdad. She bought me a book of classical sculptures – I might still have it at home – I copied the sculptures by drawing them.

What was your first project as a conceptual artist? In 2005, I applied to art school in Germany, using a friend’s portfolio. My first project there was Cooking with Mama, where I invited my mother to give a cooking lesson at the Mains Kunst Akademie, through Skype. I hadn’t seen my family since leaving in 1996 and Skype calls were still relatively new. It was a strange moment, being in touch with my mother, cooking something nice, while sharing this experience with other students who were there with us. It was a brutal feeling, very intense. My mother knew many different regional cuisines, as my father was a soldier and our family moved around a lot. My siblings had either Arab or Kurdish names, depending on the city they were born in.

In your piece, My Father’s Color Phases, you reflect on your father’s attempts to create a colour television. What influenced that project? Towards the end of the 70s, there was a rumour that the government would broadcast the Hollywood classic Gone with the Wind in colour. People thought that colour TV was in the hands of the central government, and were frustrated that it “never kept promises”. My father started putting coloured acetate films on the screens, to give the semblance of color. When we got bored of that color, he would put another one. He once did this during the broadcast of an Umm Kalthoum concert. He cut out the shapes of musicians and placed them on the screen, even though the image kept moving and the musicians changed positions. My research for the piece included interviews with locals and TV specialists from Sulaimaniya. They remembered how as a result of these rumours, many people sent their TVs to the repair shop.

What was your favourite film, or television show, when you were growing up? I loved cartoons, we used to have Soviet and Russian cartoons on television.

Your project, Estrangement, with Polish curator Anieta Szylak, was one of the first to showcase contemporary Kurdish artists alongside Western artists. The workshops you held in Sulaimaniya were important in developing contemporary art in the region. What was the aim of that project, and how did it succeed? For Estrangement, we wanted to find an informal way of approaching knowledge.The aim was to challenge the concept of otherness, to go beyond stereotypes of the Orient, drawing on the work of Edward Said and other thinkers of the post-colonial tradition. In Kurdistan and Iraq, we have informal spaces, tea houses and cafes, where I learnt to paint and draw.  But artists in Kurdistan were being taught to make art for white cube gallery spaces. We wanted to challenge that notion. We held lectures and talks in teahouses, as well as a former Iraqi Security Building which is now a war memorial museum. Artists in Sulaimaniya really developed thanks to those discussions. The result was a show in London in 2010, which went to the Wyspa Institute of Art in Gdansk in 2012. 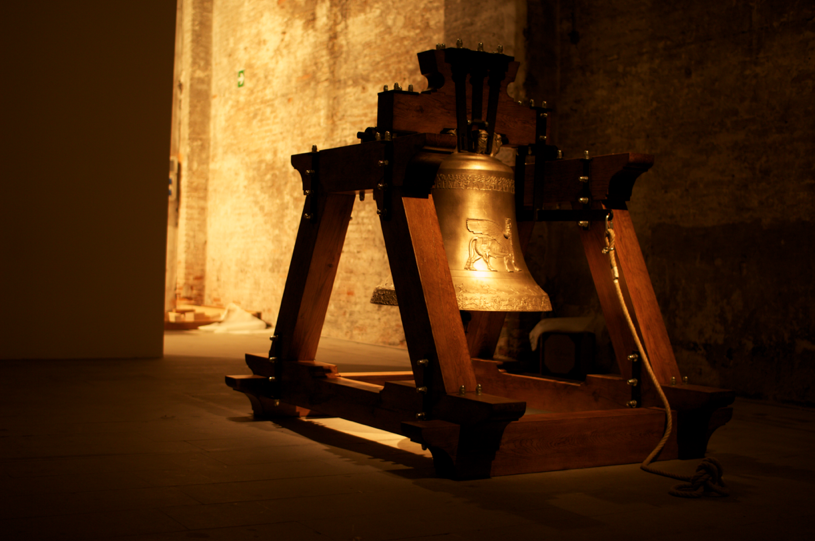 The Bell is on display at All the World’s Futures, Arsenale, Venice until 22nd November.